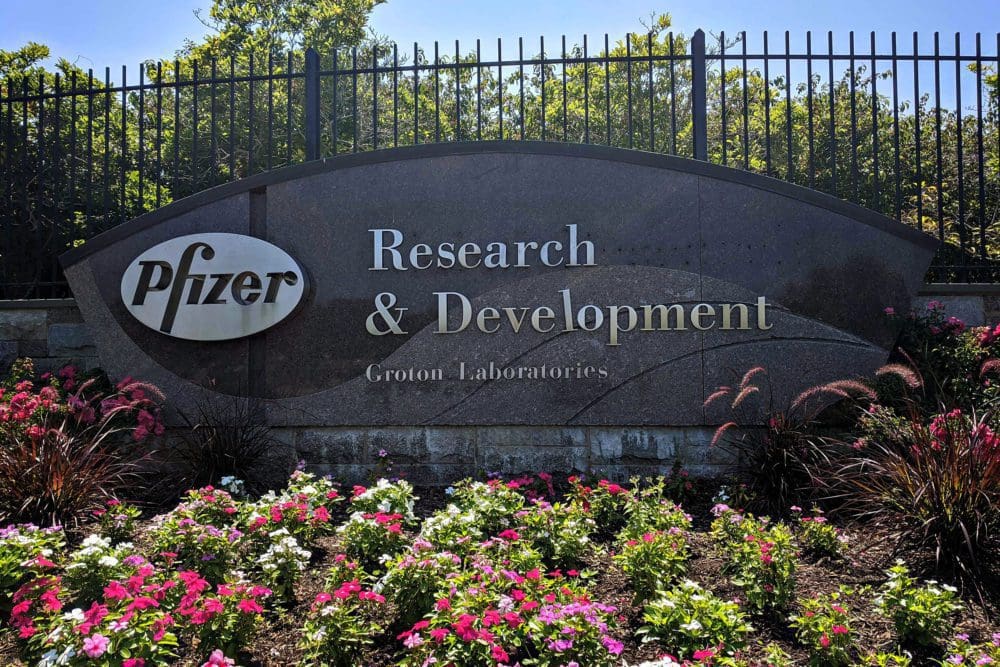 Pfizer campus in Groton on July 22.The pharmaceutical giant is working to develop a vaccine for COVID-19. (Tyler Russell/Connecticut Public) 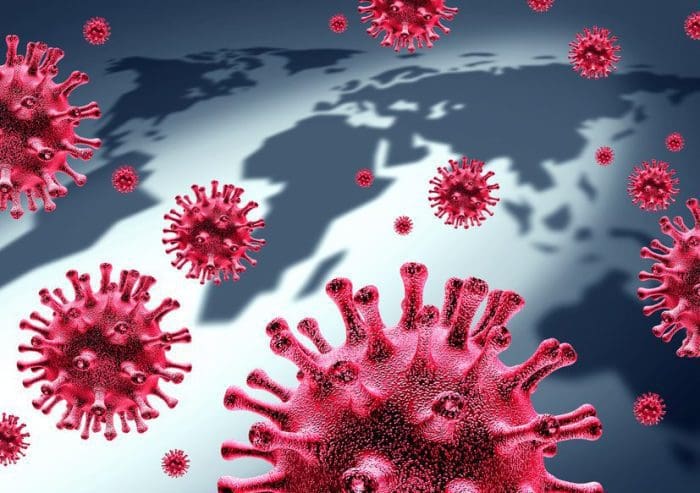 A limited supply of coronavirus vaccine could be available for some of Connecticut’s care providers and most vulnerable residents by early 2021 — provided several key benchmarks, including emergency federal approval, are achieved by year’s end, a top executive for Pfizer Inc. told Gov. Ned Lamont late Monday.

The Groton-based drug manufacturer announced Monday morning that early trials of the coronavirus vaccine it’s been developing have been about 90 percent effective.

Early results also showed the coronavirus vaccine’s effectiveness is similar to that of long-established children’s vaccines such as the inoculation for measles. It still is unclear how long patients would remain protected by the vaccine.

A plan to manufacture at least five million to 10 million doses — and possibly as many as 50 million doses — by the end of December is moving forward, said John Burkhardt, senior vice president and global head of drug safety at Pfizer.

Neither Burkhardt nor Lamont could say late Monday how many of those doses would be distributed in Connecticut.

The vaccine, which Pfizer has developed in conjunction with BioNTech, a German pharmaceutical firm, requires two doses to inoculate one patient. That means enough vaccines to protect anywhere from 2.5 million to 25 million patients could be produced by January if Pfizer meets its projections.

“It’s good news,” but “it’s going to take many months to roll out,” Lamont said during a televised news briefing at which he cautioned residents against relaxing social distancing and other safeguards. “Don’t take anything for granted.”

COVID-19 infection test rates have risen steadily in Connecticut since mid-August. After remaining around 1 percent for much of the summer, the weekly rate now stands at 3.8 percent with nearly 500 residents currently hospitalized with the virus — an increase of 94 since Friday. Another 27 people were reported dead from the coronavirus Monday, bringing the statewide total to 4,698 since the pandemic began.

Two of those newly reported deaths were Norwalk residents, according to Mayor Harry Rilling’s Monday update. One was in the 40-49 age bracket and the other was 70-79. The total is now 154.

A crucial next step to battle the virus, Burkhardt said, involves completing a detailed, early analysis of safety-related tests tied to the vaccine. No serious side effects or other safety concerns initially were discovered.

Pfizer hopes to take that safety data to the U.S. Food and Drug Administration by the end of November and seek emergency authorization for drug manufacture and distribution.

This process occurs very quickly, Burkhardt said, adding, “I would expect weeks rather than months.”

If granted, Pfizer then would immediately pursue federal approval for large-scale manufacture with the goal of producing about one billion doses — enough to inoculate 500 million patients — by the end of 2021, he added.

Despite the accelerated process, “no corners were cut,” and the company conducted efficacy tests while simultaneously planning for manufacturing. “We followed this true-and-true methodology,” Burkhardt said.

Meanwhile, a Lamont task force is moving forward with developing prioritization and distribution plans for a vaccine in Connecticut.

Because the coronavirus vaccine must be kept extremely cold, distribution also would hinge on facilities and agencies with the resources to store the drug safely, Eadie said. That most likely would mean relying heavily on hospitals and local health districts as the chief distributors of the vaccine, he added.

Pfizer’s work involves one of four vaccine efforts that are in late stage trials in the U.S., and one of 11 globally.