NORWALK, Conn. — The Planning and Zoning Commission is asking the Board of Education and city staff to gather more information about how other schools have handled solar and other “energy-optimization” projects before they officially vote to approve the plans for the new Norwalk High School.

“My sense of the meeting is, this Commission wants to approve this project,” Planning and Zoning Commission Chairman Lou Schulman said. “We have one issue standing in our way. We need to resolve this before we can move it forward.” 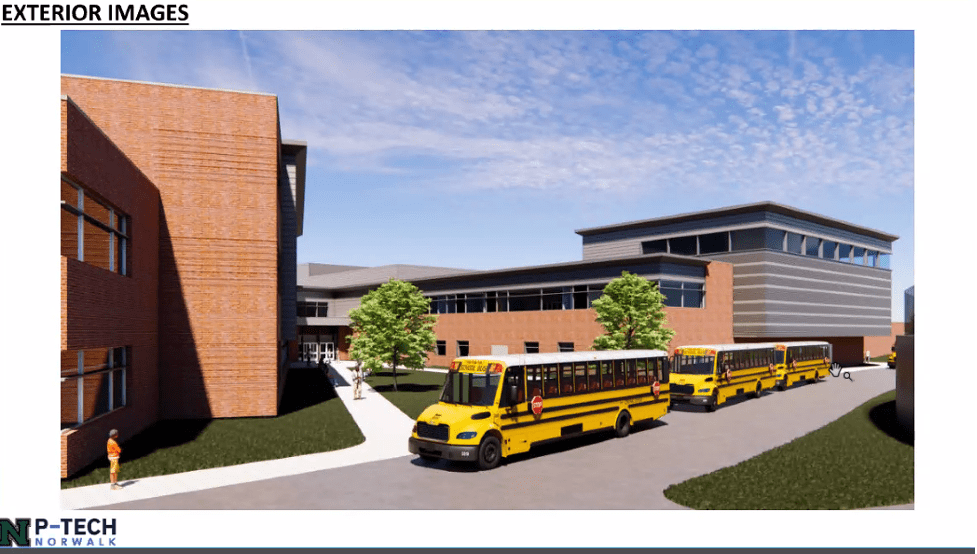 Diane Lauricella, an environmental activist and Norwalk resident, emphatically made the case during the public hearing that the new high school needed to have more solar on the site. Lauricella said that she was “very disappointed by the efforts” by City staff and the Common Council’s Land Use and Building Committee to add solar and green infrastructure to the site.

“This is not the way other towns do business,” Lauricella said, citing schools in Fairfield, Newtown, and other parts of Connecticut who have included more solar in their school projects.

Lauricella called for an increase in the amount of solar panels that can go on the roof as well as solar panels elsewhere on the site, including in arrays over the parking lots, and on top of other buildings, such as the concession stands.

“I’ve been through this before, they have not done the best job in optimizing the best use of solar,” she said

Lauricella said that especially in light of the Board of Education requesting a 12.7% budget increase this year, they should be looking at every opportunity to find savings, including through green energy.

“This was an empty canvas, and I am very disappointed,” she said. “I expect a lot more from my city.”

Alan Lo, the City’s Building and Facilities Manager, said that the plans maximize the use of solar on the roof and those panels alone would cover about 30% of the building’s energy costs. Adding solar over some of the parking would get about 15% more, and a third option that would include solar over all the parking would get them to potentially more than 60% of the building’s energy from solar. 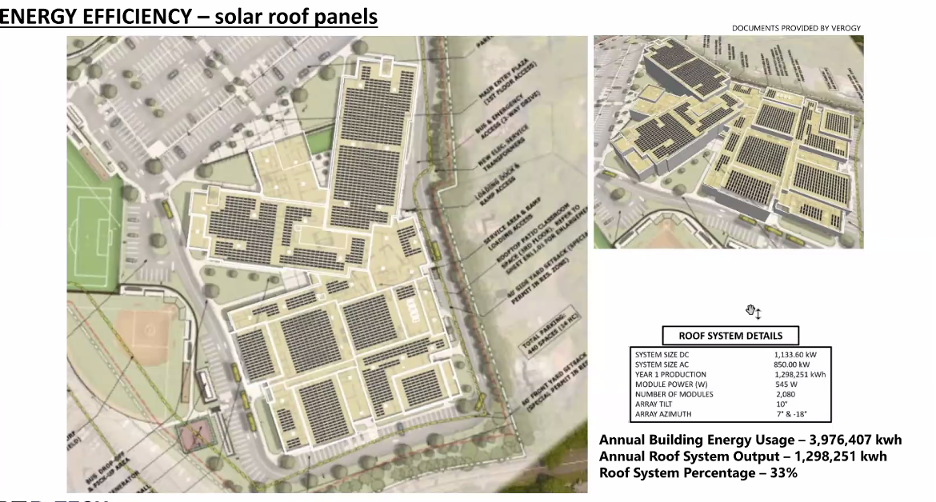 A schematic for the new Norwalk High School solar roof.

However, he added that there were “financial costs” associated with adding carports that had solar over it, such needing a funding for the structure.

“We’re going to look at the financial feasibility of how much, how little we do,” he said.

Other Commissioners echoed Lauricella’s concerns that more could be done on the site.

“The planet is all of our futures,” Commissioner Galen Wells said. “Other public school systems in Connecticut—they have full solar arrays over their parking lots. If they can do it, I don’t know why Norwalk can’t do it.”

While Lauricella cited the potential cost savings in adding solar panels, some Commissioners said that the cost might not be the most important factor.

“The notion of just a pure financial sense is a bit of a false pretense to the problem,” said Commissioner Nick Cantor. “It may cost more money to do the right thing.”

Other Commissioners said that while they supported the push for more solar—and electric vehicle charging which was also mentioned—they did have to be wary of the cost, since this school would be funded with taxpayer dollars.

“I did not hear confidently that this was being developed at the highest energy efficient standards, that our budget can bear it,” Commissioner Ana Tabachneck said.

Commissioner Tammy Langalis asked to get more information about what would happen if a student backed into one of the solar panel structures in the parking lot, adding that you “don’t see gas stations” at high schools, wondering if the electric charging stations for vehicles would be a pay per use.

Commissioner Jacquen Jordan-Byron said that she didn’t want to hold this project up too long and see the prices going up.

“Holding up this project and holding everything hostage is not a good idea,” she said.

The Commission voted unanimously to get information about how other towns have handled this. 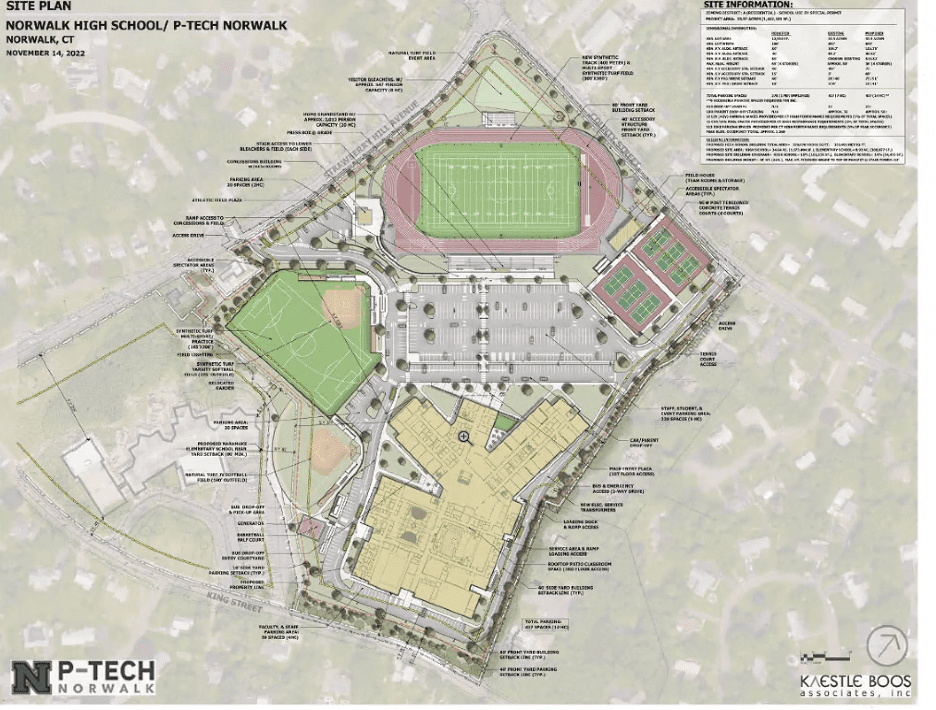 In addition to solar, members of the community, particularly those that live in the surrounding area, raised concerns about the impact moving the football field to the front of the property would have as well as if the traffic flow on the site had been addressed.

“Twice a day for me to get out of my driveway, I’m totally dependent on the goodwill of drivers,” said resident Stuart Garrelick. “I think the traffic pattern still does not work.”

Steve Ullman, the project’s traffic engineer, said that they hoped to address some of the problems with traffic backing up onto County Street and Strawberry Hill Avenue by creating two entrances and exits—one on each street—and giving parents and busses room to drop off and pick up on site.

Still, there were still concerns about getting traffic to slow down near the roadway, something Ullman said they would continue to work with the Transportation, Mobility, and Parking Department on.

Multiple residents said that they were concerned about the lights coming off the field into their houses, and if their streets could be buffered more from the high school.

“I see you have spent a lot of time in building up the natural barrier between the new school and King Street, but you haven’t done anything to mitigate the replacement of the school with the football field,” said Margie Hunter, who lives on County Street. “I feel like there is going to be a lot of noise from the announcements and use of the fields.”

Strawberry Hill Avenue resident Bob Coppola said that other streets got some buffering.

“The barriers on King Street—they fought for that,” he said, adding that they have “a lot of foliage.” “There should be plenty of foliage on Strawberry Hill.”

Adam Blank, the attorney representing the new high school project, said that some of the concerns were because the high school site isn’t “ideally functioning” right now, but the new site would offer some improvements, such as traffic.

Still, he said not all of their concerns could be addressed.

He added that he knows residents “want it to be better than the last version, and I think we’re substantially doing that.” 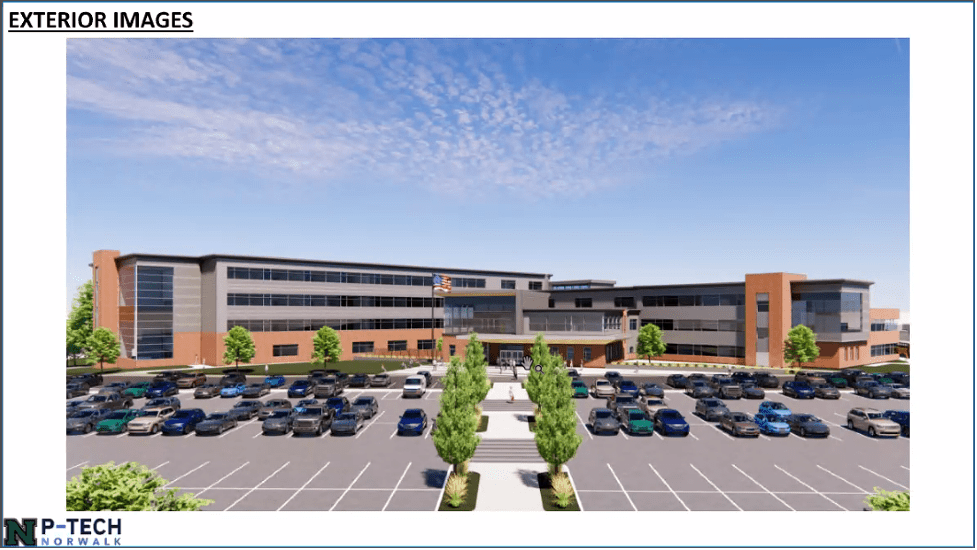 Two Common Council members and a Board of Education member voiced their “full support” for the Norwalk High School project during the public comment session.

“I stand behind this project,” BoE member Janine Randolph said. “I think and hope that good compromises can continue and we can move forward.”

Council member Tom Livingston (D-District E), who chairs the Land Use and Building Management Committee, which oversees the school construction projects, said he wanted to “give my full-hearted support for this project.”

“We remain committed to this project,” he said. “We think it’s extremely important to the city. We look forward to working with the community to getting this project done.”

Council member Jenn McMurrer (D-District C) said that she believed they were working toward “making it the best it can be for both the students and the staff, but also the neighbors.”

“Plans are ever evolving but I really do feel confident that we have addressed a lot of the concerns that have come up,” she said.

The Planning and Zoning Commission plans to receive the new information related to solar issue and green energy at its next meeting at 6 p.m. Feb. 1, after which they’ll vote on the plans for the high school.

“IT may cost more money to do the right thing” — What the heck does that even mean? AND whose money is it anyway. I can name 100 “right things” that this building should contain that don’t make sense economically…Holy Cow ! It’s time we stop listening to the “sky is falling” zealots who seem to not know how to balance a check book. I would like to know how Alan Lo can actually respond with a straight face…Kudos to him.

The Bob Duff High Nightmare Continues! BTW since the original estimate of the total cost is about 2 years old now has anyone even inquired what the new cost will be!? And how far delayed this project is? And how long will it REALLY take!?! But I’m so glad CC members and BOE members with absolutely no kids in the schools are giving their full support. How about maybe asking what the residents actually want because it’s not this! Does the HS need repairs and updates it sure does. But you all are destroying a new wing which doesn’t have a bathroom which idiot in the City approved that? Remind me of the NHMS Concession Stand that couldn’t be used for a long while. A beautiful Football field that finally got the new scoreboard video working. The plan is horrible and will cost us millions and millions more than is advertised. But like the school budget it’s not their money so they will just spend away no matter the consequences. All so little Bobby Boy gets his way. How Sad!

The 800 pound gorilla is a perpetual need to fund the schools maintenance and operations, which we can’t do now. Who is going to pay for the upkeep of these panels that will be staring in the face of the neighbors? Good time to sell.

@DT. The worst part of all of this, money being fungible is that the cohort of children coming into this fall of 2023 are the same ones who had limited Middle School experience due to covid. They are going to have to deal with a campus under construction for their entire tenure. Half of their childhood in total. It’s very sad. Duff doesn’t care because his youngest walks this year. He only cares about the photo op he’ll receive in 5-10 years crediting him for the new building. Makes you want to puke.