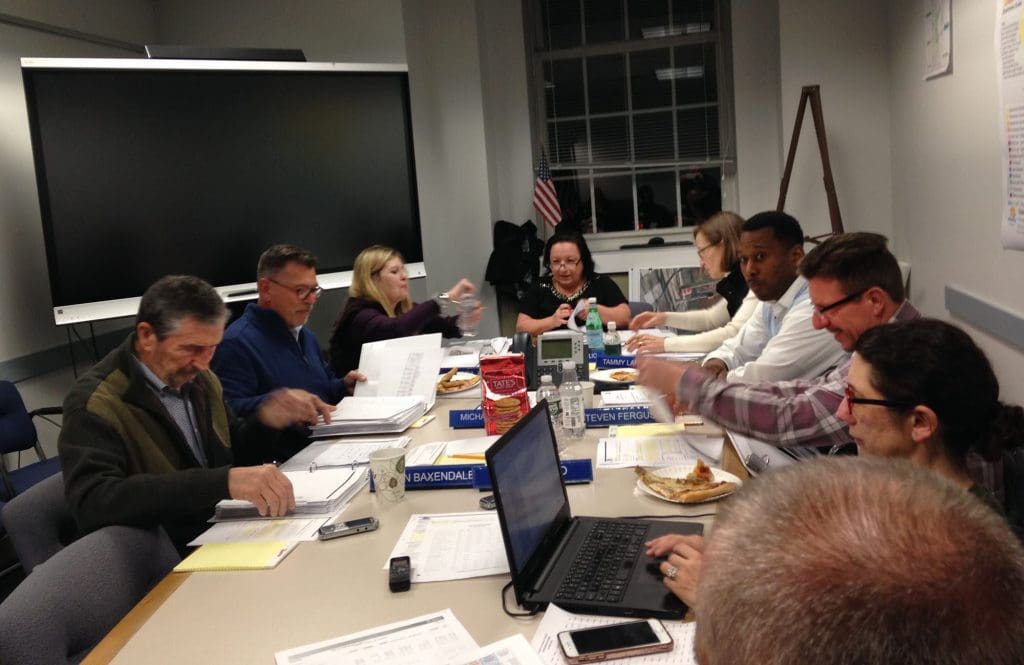 The NPD’s current marine base at an old rented building on Water Street is beset with flooding, explained Kulhawik.  Noting that the Recreation and Parks Department’s 2022-23 budget includes funds for a welcome center, he extolled the advantages of a new shared structure at Vet’s Park that would also contain office space and storage areas.

“It would be ideal,” said Kulhawik.

Pointing out a change in the budgeting process, the Chief stated, “For as long as I can remember, cars and vans has always been in the operating budget, but the new CFO said he wants it in the capital budget.”   Requesting 12 new police cars, he explained, “Each year the number of cars changes, based on a plan that was put together to keep the fleet at a certain age.  It varies between nine and 12.” 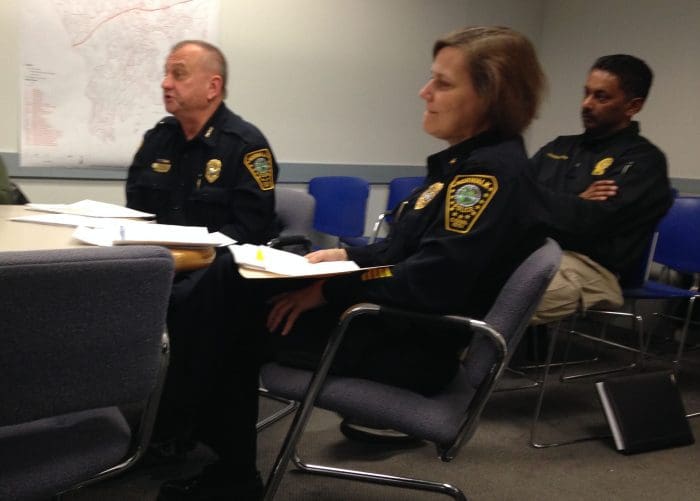 Asked if the department was considering hybrid vehicles, Kulhawik replied, “Ford just came out with a hybrid version of the police package, but it’s something that people haven’t used yet, and I’m afraid to go out and get 12 without any history.  New York City police just bought a bunch of them, so everyone’s looking at them.  If it works, we’re going to look at them for next year.”

Also addressing the Commission, Redevelopment Agency Deputy Director Tami Strauss requested $300,000 for the RDA’s “façade improvement program” which restores historic buildings’ exteriors to their former grandeur.  Citing the stained glass window restoration at South Norwalk’s Canaan Baptist Church, Strauss said that the program “increases the value of everything around it, because the neighborhood looks better.  It’s a neighborhood improvement as well as a building improvement”

Apart from budget requesting, Struss took time to predict an elaborate future project involving the SoNo train station: “For two or three years from now, we’re looking at a multi-modal solution at the South Norwalk train station so that it can handle all different sorts of ways that people get to and from the train station. Whether it’s private car, Uber, Lyft, bus, an on-demand service like our Wheels2U, or a shuttle van, right now the station’s not really configured to handle all of that, so we’ve been collaborating with Transportation Mobility and Parking and the Mayor’s office to look at a holistic approach to planning and engineering the train station to accommodate traffic, 21st century modes of transportation and getting more people to and from the train station without putting too much pressure on the parking, and being able to handle all those different types of transportation.”

She also introduced the Commissioners to the RDA’s new executive director Brian Bidolli, whose credentials include experience with TIF (tax increment financing) and who is studying the applicability of that particular financing tool to Norwalk’s needs.

A public hearing on these and other capital budget items will be held at 7 p.m. next Wednesday Feb. 5 in the Community Room on the 1st floor at City Hall. You can read about the capital budget requests on the city’s website.

Nothing on the new Cranbury School? A new facility at Vets would be nice, but will we staff it? The Seaview Ave entrance is locked most of the time forcing everyone to go in and out of Fort Point street exit. Anyone with soccer kids knows how aggravating this is.

Back to Cranbury. The existing building would need $20 plus million in renovations to bring it up to modern standards and that would just leave us with a 60 year old building with new windows basically.

Cranbury has been screwed over going on three decades now with one failed promise after another. Don’t be sidetracked by Duff’s NHS kool-aide.

Cranbury has nothing. No fire department, almost no sewer service, no garbage pickup, no leaf pickup. Nothing. Just huge tax bills and a 30 minute police response time.

Send a message to Cranbury that you care and approve this plan. Besides a shiny new building, it will increase the field space there, which is also desperately needed while you are expanding Vets.

All residents are invited and encouraged to attend the Capital Budget Public Hearing on February 5 at 7:00pm in the Community Room at City Hall. All City Department leaders will be in attendance. The public can comment on the proposed budget and ask questions.
Thank you.
Fran Di Meglio
Chair – Planning Commission

I think the Chief has great point on the the new building to house the Police, Fire water operation and a Welcome Center, launch office it would be nice !

I like the idea of expanding that building by the boat launch. Maybe we could get an air compressor and a few hose bibs for public use? And if they can’t open the Seaview ave gate, make the exit lanes a little wider on Fort Point so right turning traffic can escape within 5 minutes. Right now all it takes is one loser who can’t make the left turn to jam up the whole works.

A nice new building at Vets Park is a great idea. However, every Climate Change expert say that the sea level with have it flooded out in 5 to 10 years. I sure hope they build that sucker at least 30 feet up above the land fill that it is.

Fran- How can the public comment on the Capital Budget when it is NOT yet available on the city website?? With a Wednesday public hearing only those “in the know” will have seen enough to comment.

What about the horrible ball field at Vets Park? Nothing in this budget or plan to re-do those?!? The fields are HORRIBLE! It take literally 5 days for the fields to drain after a small rain. The infield has grass growing in places it shouldn’t be. Every child and league cringes when they have to play there because is horrible . There are no concessions but a concession stand that is permanently locked for whatever reason. The bathroom facilities are locked until June and we start games and practices April 1. We have a single unit port a potty that on an average workweek is only good for about 10 people. But what we really need are LIGHTS! especially if we want to host any kind of Baseball Tournaments that bring in much needed $$$$ to the City. We could even earmark a large percentage right to the BOE. Our children need good places to go and play with good facilities. We need a place we are proud to show off to out oft owners instead of the moans and groans of having to play there. If you just take a look of what well, maintained fields look like around Fairfield County you will understand. And the fields need a scoreboard that works! And lastly and this goes for all the other baseball fields as well is let the individual leagues work on the fields!!! We do anyway except cut grass and when we do they look beautiful. As for someone who has spent hours on them the kids, parents coaches appreciate and love playing on them. If you come look at the NLL Fields at Broad River during the season you will understand and appreciate the fact our children and residents deserve a beautiful field to play on and be proud of.

Drew makes a great point. On that note years back Mike Mocciae at Parks and Rec. instituted a $5.00 fee for out of town cars. His rationale was to keep The Beer drinkers and riff raff out which makes sense. I hounded him on the fact that on Saturday morning when a car full of future world cup stars show up for the match we make a exception. Hand every out of town soccer mom a yellow card. It fell on deaf ears.Please tell me we don’t still charge out of town sports parents to park at Veterans for a sporting event. If we do let’s stop now. We were an embarasement to The Fairfield soccer community. That and our outhouses Drew references. My joke was people from New Canaan wondered if Norwalk has discovered indoor plumbing yet.

I have sent NoN the link to the Capital Budget requests to post.