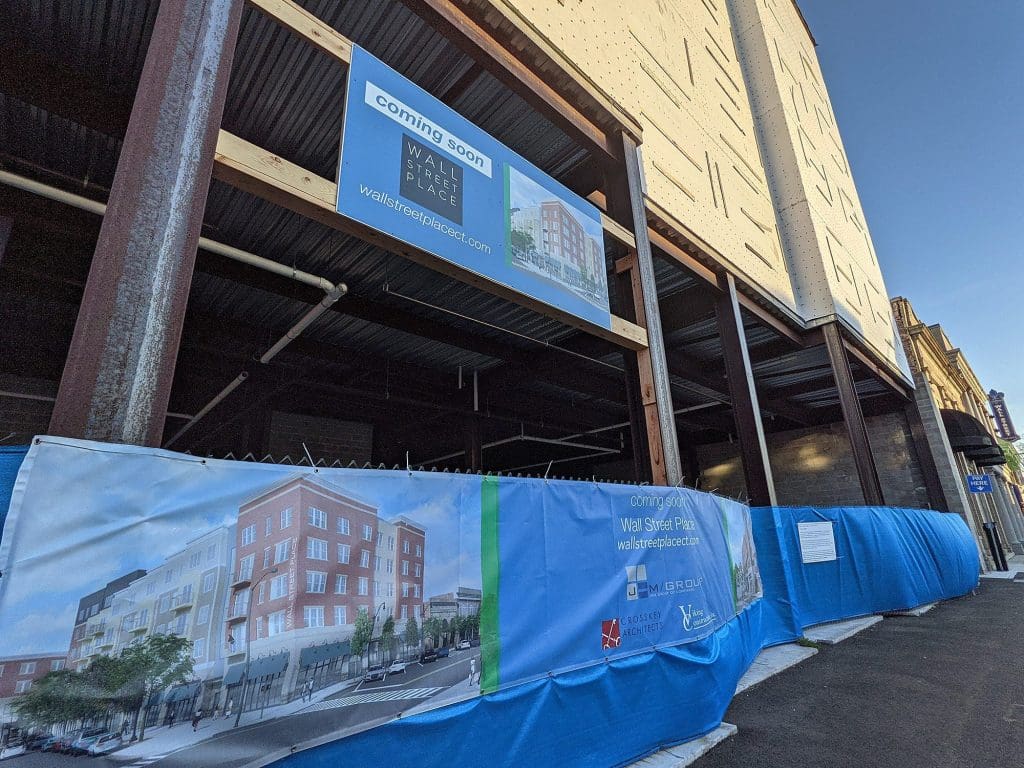 The “Tyvek Temple,” officially referred to as Wall Street Place phase I but colloquially called “POKO.”

NORWALK, Conn. — Norwalk’s tax board has authorized a $282,000 budget transfer to cover legal fees in the “POKO” lawsuit.

Corporation Counsel Mario Coppola expects to incur $200,000 in fees “over the course of the remainder of the Fiscal Year” – a time period ending June 30 – in the lawsuit, according to Deputy Corporation Counsel Jeffry Spahr. The flip side of this coin is a windfall from a settlement with CC Rivington, a defendant in the lawsuit. CC Rivington agreed to pay $200,000, of which $125,000 has been collected so far, Coppola said Monday.

CC Rivington was “the least culpable of all the defendants by far. And we specifically settled with that party for purposes of using the $200,000 to fund the litigation,” Coppola said.

Attorney Marc Grenier recently said that fees for outside counsel in the Wall Street litigation were $865,023.73 as of Dec. 1. That’s for multiple lawsuits involving Milligan.

Spahr, in a March 31 memo requesting the budget transfer, said there’s a $78,000 deficit in the legal services account and outstanding invoices of $3,800. Other legal matters are being paid for from the account.

“There is an agreement with the firm (Shipman and Goodwin) that fees on the {POKO} matter shall not exceed $450,000. It was hoped that this case might resolve — however, at this stage it appears increasingly unlikely to do so,” Spahr wrote.

“I do know that in the POKO litigation, we do have, thanks to Mr. Coppola, a cap on the remainder of the cost that we might be exposed to,” Mayor Harry Rilling said.

The “POKO lawsuit” stems from real estate broker Jason Milligan’s purchase of properties slated to become part of Wall Street Place (commonly referred to as “POKO”), which the City and Norwalk Redevelopment Agency maintain was done in violation of the Land Disposition Agreement (LDA) for the parcels. Milligan, under multiple legal entities, is the most active defendant in the lawsuit.

CC Rivington is a mortgage company with tertiary involvement in the transactions that the City and Redevelopment Agency contend were unfair trade practices, breach of contract and intentionally interfering with a contract. The company agreed to settle in August. Officials would not reveal details at the time.

Richard Olson of POKO Partners, who sold Milligan the properties, is also a defendant, under ILSR Owners.

On April 1, the plaintiffs filed a motion for summary judgment, an attempt to end the case without a trial by having the judge rule based upon undisputed facts. Milligan and Olson have not yet filed a reply.

Milligan said in December that, “It is a well-known fact that summary judgement is seldom granted in the state of Connecticut.” A lawyer asked by NancyOnNorwalk for comment said he generally agrees that it’s difficult to win a motion for summary judgment in Connecticut state courts.

Coppola said Monday that the plaintiffs are in the process of finishing depositions of two fact witnesses, which he expects to be complete by April 15. The Court should rule on the motion with four to six months, Coppola said.

A ruling in favor of the plaintiffs would not include a ruling on damages, as the plaintiffs have asked that be decided later due to the complicated nature of the case.

A hearing is scheduled for June 4.

BET members were chiefly concerned about where the money was coming from for the transfer. There would only be $81,000 left in the contingency account when this and two other transfers were approved, James Frayer and Ed Abrams said. The total transfer was $ 419,400.

There will be surpluses in other accounts, said Norwalk Chief Financial Officer Henry Dachowitz, Norwalk Director of Management and Budgets Angela Fogel, Board of Estimate and Taxation Chairman Ed Camacho and Mayor Harry Rilling.

As an example, there are unfilled positions, particularly in the police and fire departments, Fogel said.

“You can move the money around. And as Angela said, even if we filled every vacancy in the city, the timing is such that we may have the vacancies for three or six months,” Dachowitz said.

“I am very confident that at the end of the fiscal year, there will be money in other accounts that after everything is reconciled, we’re going to end up with a bit of a surplus that can be put back into contingency which will then go back into the unassigned contingency, rainy day fund,” Rilling said.

BET member Troy Jellerette asked what’s up with Wall Street Place phase I, commonly referred to as “POKO,” because “I drove by it today. And I see there’s a sign up there saying that something’s going to be happening soon.”

Amended plans for the “Tyvek Temple,” the notoriously Tyvek-wrapped building at the corner of Wall Street and Isaacs Street, were approved by the Common Council nine months ago. They include demolishing the Garden Cinemas to provide room for a parking garage and additional apartments for the mixed-use development, heavy on affordable housing.

The Zoning Commission approved the amended plans for in January. Milligan filed an appeal in February.

Coppola explained this to Jellerette.

“They could actually go forward and pull building permits and put shovels in the ground,” Coppola said. “However, Mr. Milligan filed an appeal of the zoning approval, which is pending in court. He also …  filed a lawsuit against the owner of that phase one project regarding some alleged claims, regarding easements. So those two suits are pending. And that’s what’s right now holding up the developer from starting to complete the building.”

The lawsuits actually stem from the SALE of the parcels by ILSR who is a party to the LDA, not by the purchase by non party Milligan.

I did not and could not violate an agreement that I am not a party to!

Now that I own the parcels I may be subject to certain agreements to the extent they are valid. So in theory I could now violate the agreements. However since I have owned the parcels I have been in complete compliance with all aspects of the LDA including providing public parking.

I have brought renovated buildings, new businesses and a beautiful #ArtPark.

It’s time! Why doesn’t whoever has it in for Mr. Milligan just challenge him to a duel or fist fight and let everyone else sit down and arbitrate this to a conclusion. If the city is so afraid of arbitration maybe they are not as in the right as they think they are. The only winners so far appear to be the lawyers. What do we have to show for nearly a million dollars spent?

A million dollars for what ? What a town; Poko played are elected officials like a bunch of dummies for more years than I can remember. I have never met Jason Milligan but it seems he’s trying to accomplish something, wall st is a joke and has been for years. It’s time to get rid of all the people in this town who were in bed with Ken Olson you know who you are.

So to feed his ego and he ego of his legal counsel – they will spend the money on this but not on the BOE. What is wrong with the Mayor and his team?

POKO’ lawsuit expected to inspire $200K in legal fees by June 30
HUH?? Inspire?? I had to look up inspire in the dictionary!

2.
breathe in (air); inhale.
“they can expand their lungs and inspire enough gas to satisfy oxygen requirements”

Hmmmmm. Well that didn’t help! Except the part about filling their lungs with gas!

Abstractly I can visualize that. Politicians in general are gas bags in my definition of things

I agree with Mr. Milligan “actions do speak louder than words!”

It is tine to take off the jousting armour city hall!

This endless lawsuit is nonsense! Use Mr Milligan’s inspiring energy, ideas that are converted to action (even while running defense from the city every step of the way!! ) Can you just imagine if Norwalk would pull together snd work with, instead of against, this energy? Thee
possibilities! Now that , that would be truly inspiring! Things to actually help Wall Street, not bleed Norwalkers dry with legal fees! (Even if Mayor Rilling thinks the legal fees promised “cap” of $450,000 sounds good!). How does that work exactly?

Regarding “something’s going to be happening soon” at the POKO site: we’ve been hearing that song & dance since at least 2014. I’ll believe it when I see it, and when I see it completed.