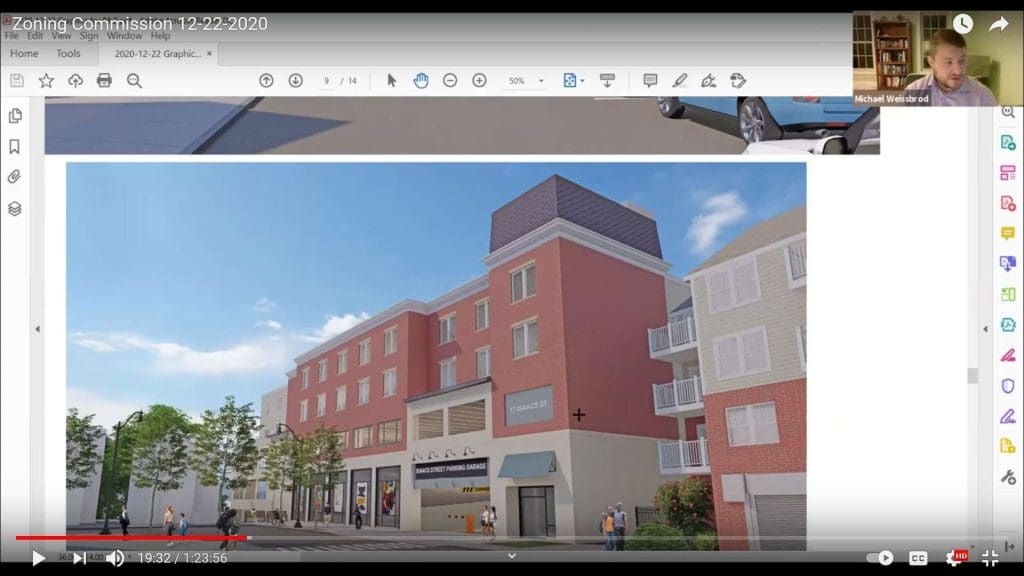 Michael Weissbrod of Crosskey Architects shows off changes to the design for Wall Street Place, during a recent Zoning Commission meeting. 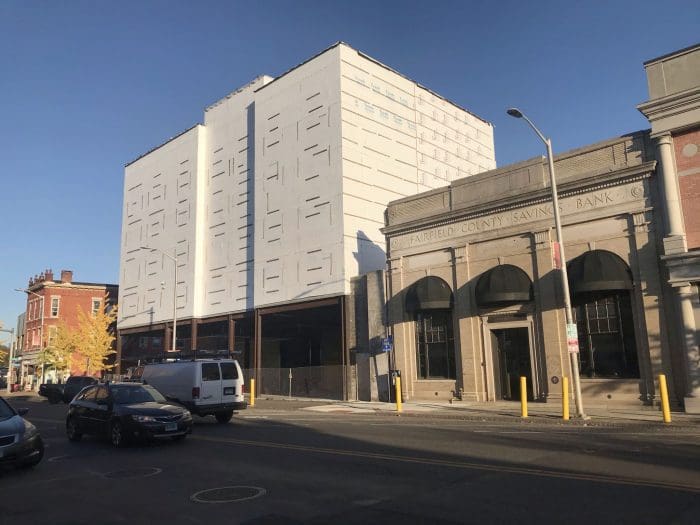 The so-called “Tyvek Temple” at left; one of Jason Milligan’s more recent acquisitions, the Fairfield County Bank building, at right.

“This seems to be a really impressive development,” Commissioner Joshua Goldstein said just before Christmas, echoing the thoughts of other Commissioners in praising the product produced by the partnership of the City’s design review consultant and Michael Weissbrod of Crosskey Architects, working with JHM Group to advance construction on the Tyvek Temple, Wall Street’s long-standing eyesore.

“I think it’s a fantastic job that was done between the two architects, I just can’t get over how our peer review architect and the project’s architect have cooperated,” Commissioner Richard Roina said.

Zoners expect to take up the matter Thursday, after delaying their decision to receive input from the Norwalk Redevelopment Agency. Redevelopment is slated to meet today, Tuesday Jan. 5, to conduct the design review expected by Zoning.

Neighbors are itchy: Michael McGuire, who owns 64 Wall St. directly across from the Tyvek Temple, alleged over the holiday break that the City held its latest meeting on Dec. 22 because “the less the public knows the better.”

The Zoning Commission’s hearing began on Nov. 5 and was continued to Nov. 18, then to Dec. 9. At that point there was a glitch: Planning and Zoning Director Steven Kleppin announced that it wasn’t being broadcast to YouTube, so conversation stopped and the hearing was continued to Dec. 22.

Milligan and his attorneys are the only members of the public to weigh in during this process, mostly at the Nov. 5 hearing. Milligan asked if he could speak eight times since he owns eight properties near Wall Street Place and was refused in that request. Attorney Emily Wilson, a former Zoning Commissioner, said it was “a little odd” that Wall Street Place was being grandfathered in, given that it’s “something that doesn’t exist.” Attorney David Rubin, Milligan’s warrior in the ongoing court battles, furthered that theme by arguing that the underlying redevelopment plan that the “grandfathering” is based on is invalid.

This is a matter in front of the court.

“There are four other lawsuits and I’m starting a new one as soon as you approve this,” Milligan told Zoners on Dec. 22. Commission Chairman Lou Schulman said the legal battles are beyond the Zoning Commission’s purview and not a factor in its decision-making process.

Attorney Bill Hennessey, representing JHM, alleged that the fact that no one from the public has spoken at the hearings except for Milligan and his lawyers is “a testament to the fact that they’re quality buildings, and they’re welcomed by the community.”

Construction on Wall Street Place halted in mid-2016. JHM’s new plan, developed in private discussions with the Redevelopment Agency and the City, features 151 apartments, in contrast to the originally planned 101 apartments, and an additional building: the defunct Garden Cinemas are set to be demolished and replaced with a parking structure and apartments on the upper floors. The housing is planned to have a high affordable component, with 45 apartments at market rate. 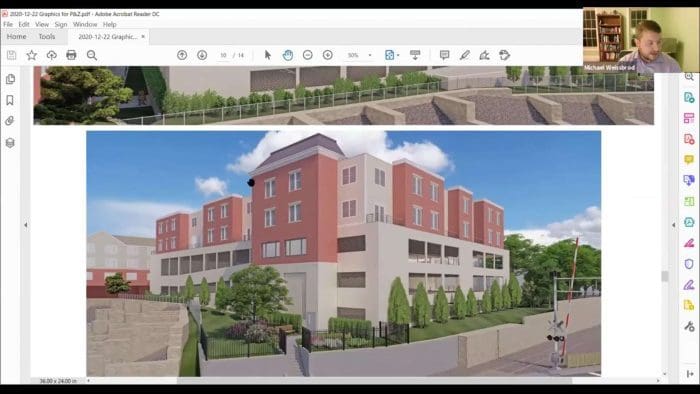 Michael Weissbrod of Crosskey Architects shows off changes to the design for Wall Street Place, during a recent Zoning Commission meeting. The fenced green area shown just off Commerce Street is a “pocket park.”

A “little pocket park” along Commerce Street is among the additions discussed by Weissbrod.

“I think this peer review process is made a great project an excellent one,” Weissbrod said, detailing changes made since the Nov. 5 hearing. Some minor examples:

Weissbrod and the city’s peer-review architect, Bob Grzywacz, also focused extensively on window treatments. Zoning regulations call for “75 percent transparency” at the ground level, and Grzywacz engaged the Commission in questions about what Norwalk might desire in design guidelines – is a mullion considered transparent? 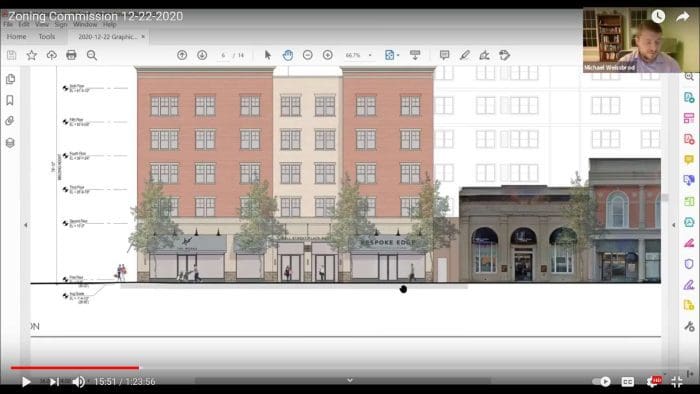 Michael Weissbrod of Crosskey Architects shows off changes to the design for Wall Street Place, during a recent Zoning Commission meeting.

Weissbrod said mullions had been added to some of the windows for architectural effects and, “It helps break down the glass on the upper stories and helps relate to the mullions on the storefront below.”

“We are treating the Wall Street corner and facade a little bit differently given its prominence of the project and adjacency to the historic building,” Weissbrod said, explaining that the windows did not have mullions but now a “four over one” pattern – four small segments over one large pane – is planned. 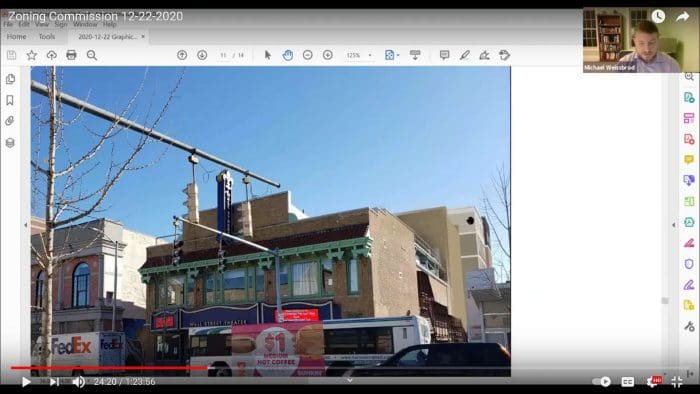 Michael Weissbrod of Crosskey Architects shows the result of a sightline study, with “POKO” barely visible behind the Wall Street Theater, from a pedestrian’s point of view.

Architects did a sight-line study by taking photos of the existing buildings and superimposing the modeled project into the images, Weissbrod said. Even though the project’s tallest floors will be six stories instead of the five currently allowed by Zoning, the images “demonstrate that, you know, the six-story mass will not negatively impact the Wall Street pedestrian experience, and you’re only going to catch ever so much of those, a small glimpse of this as you pass between the buildings,” he continued.

The project was recently fine-tuned in response to comments from the residents of the Phoenix condos at 19 Isaacs St., Weissbrod said. Now the open space between the two buildings is planned to coordinate, to “more or less double the usable space.” And architectural elements have been added to what had been planned as a plain wall.

Milligan commended this move, alleging that the neighboring residents had just become aware of the plans.

The conversation “went a long way to actually meeting some of the community needs,” Milligan said. “We felt like this project was getting slammed down everyone’s throat, and that that actually changed a lot of people’s opinion that they were working with the community.”

Hennessey alleged that Tod McClutchy of JHM reached out to those residents in August and met with them without lawyers present.

“I will be appealing this unfortunately,” Milligan said, alleging that 1,500 people had signed the Wall Street Neighborhood Association’s petition calling for court-assisted mediation in the ongoing legal battle.

“You should look for mediation, because there’s a lot of issues to resolve, and nothing’s going to happen with all this litigation. They’re not going to get tax credits,” Milligan said to Zoners on Dec. 22. “…We’re not getting out of this mess unless we get around a table together.”

Hennessey pointed out that the Tyvek Temple is sitting there.

“I don’t know that I’ve ever been perhaps some of you have associated with a project that is this unusual,” Hennessey said. “I mean, we have a situation here, where a building has been sitting unfinished and exposed to the element for several years… It was designed by others, and it has as a central feature, a completely useless robotic parking situation.” 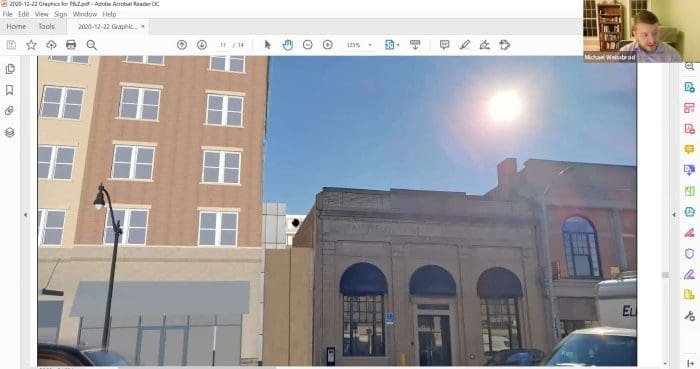 Michael Weissbrod of Crosskey Architects shows the result of a sightline study.

Given the complicated scenario, most people would say “any solution is probably good enough, even if it’s a marginal product, we got to get, we’ve got to figure a way out of this mess,” Hennessey said.

Schulman took a poll, to guide Kleppin in drafting a resolution for Thursday’s possible vote.

“I’m more inclined to go forward with it,” Commissioner Nick Kantor said, noting the affordability component as “really important to the area” but expressing reservations about the height.

“I’m in support of the project. I mean, it is a well thought out project. And as you say, a lot of time has been invested,” Commissioner Michael Witherspoon said.

“This is not a vote,” Schulman said. “This is our impression at this point in time. We have yet to review what the Redevelopment Agency has to say. But, Steve, I think you’ll have what you’re looking for going forward.”

POKO 2.0 is too tall. The zoning regulations clearly state that 4 stories is the maximum height permitted on Wall Street and Isaacs Street. A bonus 5th story is possible to get by providing 2 public amenities.

It is the “height” of hypocrisy for the leaders of Norwalk to support cheating the rules that they established and the rules everyone else must follow.

Selective enforcement is unethical and illegal.

Creating special rules for 1 property is called spot zoning and is also illegal.

This building would be massive and it would loom over its neighbors including the Wall Street Theater and the Phoenix condos.

6 stories is not permitted. If this project were reduced to the permissible 5 stories then I would likely not object or appeal to a zoning approval.

I will still take issue to the fact that POKO tramples the rights of a valid easement I possess. The easement has been in existence for 70 years. It provides access, loading and unloading to the back of the FC Bank building.

There is an existing lawsuit over this easement.

Of course there are 2 other lawsuits that contest the validity of the Redevelopment Plan.

For a city to have a valid redevelopment project with all the bells & whistles and special treatment there must be a valid Redevelopment Plan and Plan Area.

NO PLAN NO PROJECT!

All well and good if approval can really lead to forward progress but how about a legal opinion regarding a time estimate for resolution of the legal barriers to proceeding. This is so tied up in legal strangleholds that mediation seems to make a lot of sense.
It’s not binding, but people talking is more likely to bring about resolution than people not talking. Which is why I signed the petition.

I’m really concerned about the no i have not gone to the zoning meetings in a while. It was apparent a few years ago that this project was happening no matter what. Not because the public was for it. But due to shady politics land highly questionable financial benefits. I am deeply troubled that everybody outside of the redevelopment agency involved in the financing has stayed silent. Also the cost basis is an issue that unit price is still higher than single-family home prices are currently for single bedroom apartments but these are supposed to be affordable. I do not know what developers have a hand on this but has the same feeling as other large projects in town that have add to a population yet are a tax burden and not a source of additional revenue to the city.

Why do we have zoning laws? Every development seems to require special permits and exceptions, needing Norwalk residents to make sacrifices and modify our environment to accommodate theirs increasing their potential for monetary success, and spend A LOT on lawyers. How about developers live with our rules or move on? How about we simply reject developers that can’t live within our guidelines? If we need to change the zoning laws across the board, let’s do that first BEFORE entertaining new development projects so developers can build to the latest rules. Until then, we’ve got plenty of great development opportunity within our current guidelines — let’s not waste time/money on lawyer fees for those who can’t live within the rules.

Hi, Something wrong with the video or image? I clicked on it to zoom in on what those balconies look like and was directed to a 404 page. Video lost after only 2 days?