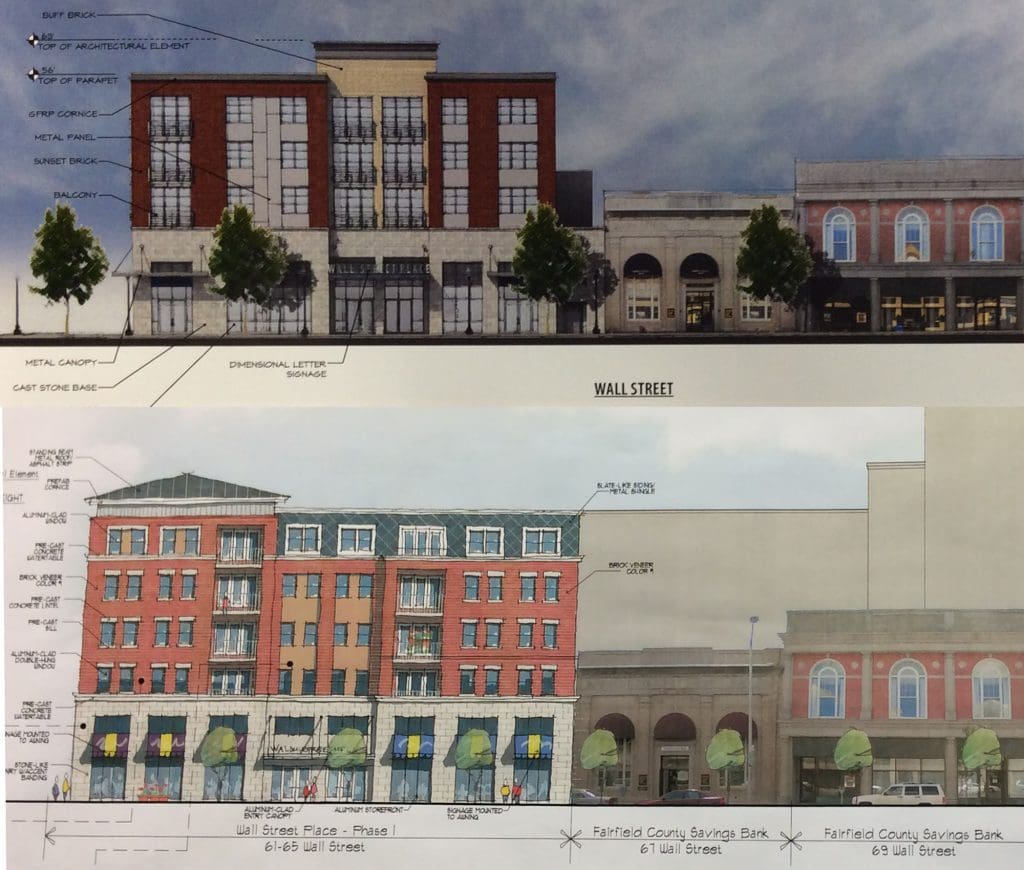 At top, the new plan for POKO Partners Wall Street Place. At bottom, the 2008 rendition.

NORWALK, Conn. – A revamped version of POKO Partners’ Wall Street Place development, now on file in Norwalk’s Planning and Zoning Department, is shorter in some places than its previous incarnation and features an updated streetscape plan that former Zoning Commission Chairwoman Jackie Lightfield said fits in better with the neighborhood than the original design.

The plans, attached below, show that while six stories were approved for the Wall Street façade, POKO is now planning five stories. POKO was planning seven stories along Isaac Street but is now seeking approval for five and six stories there. The plan for eight stories on Isaac and New Street (a new street) remains, as does the total number of apartments, although one more workforce housing unit has been added. 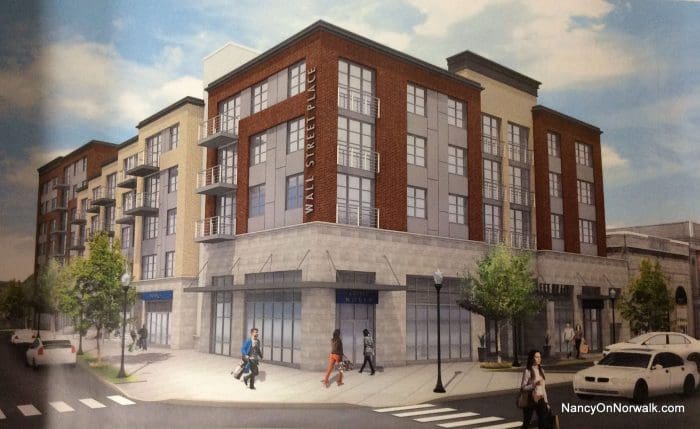 An artist’s rendition of the latest POKO Partners plan for Wall Street Place.

“The roof line now is much more interesting and fits in with how a series of factory loft buildings might have evolved over time,” Lightfield wrote in an email. “Note that the metal cornice echoes the cornice treatment on most of the buildings (older) on Wall Street. This reflects an architect that understands the period of architecture and streetscape look. It is much appreciated. (As an example, look at West Ave. buildings, or the proposed Head of Harbor South, neither attempts to blend into the visual look of the streetscape).”

The plan, drawn up by Kitchen Associates, will be considered at the Jan. 8 meeting of the Zoning Commission’s Plan Review Committee; commissioners will eventually determine if the amendments are a “minor change.”

“From a zoning standpoint, the review shouldn’t take long unless there is an impact on the public amenities and parking,” Lightfield said.

Keith Peacock of Kitchen Associates said, in a letter to Planning and Zoning Director Mike Greene, that the plan has been “repuzzled” following an analysis of the constructability of the building and a current code review.

“The revised residential units configuration and greater efficiency of the corridor/unit ratio resulted the reduction of the building height by one story along Wall & Isaac Streets and reduction of the overall building height,” Peacock wrote. “These minor changes in plan resulted in adjustments to the geometry of the elevations. However, most of the design elements from the approved plans are retained.”

A roof deck has been added to the fifth floor roof along Isaac Street.

There will be 65 market rate units and 36 workforce units under the proposal. Recreational space in the building is increasing from the originally approved 19,924 square feet to 23,460 square feet.

The setback from the Wall Street right of way is decreasing 1 foot; no setback is required, according to Peacock. The “through block arcade” is increasing from 1,575 square feet to 1,870 square feet.

“The setback impact on the Wall Street facing would be a question I would ask along with more detail about the arcade,” Lightfield said.

“We are still targeting the resolution of all open issues if not by the end of the year, then by the first week in January,” Olson wrote.

Sheehan said he met with Olson Tuesday, strictly to go over infrastructure improvements needed for the project, which is Phase I of a larger plan.

Although Zoning approved the Phase I design in 2008, the plan dates back more than a decade with the formulation of a Land Disposition Agreement that included the transfer of city-owned property to POKO. An extension was granted this summer, with strict benchmarks for POKO to meet.

The first of those benchmarks is the 150-day requirement, which Sheehan figures is Jan. 31:

Within 150 days of the Effective Date, the Redeveloper will evidence: that (1) all required governmental permits pertaining to zoning and demolition have been secured for Phase I; (2) an updated Phase II environmental assessment of the site has been completed; (3) any subsequent environmental mitigation plan has been approved by the responsible governing body; and (4) the Agency has certified  that the Redeveloper has closed on all necessary construction and permanent financing (public, commercial and equity) required to complete the Phase I Improvements.

Sheehan said recently that the requirements for an environmental assessment and mitigation plan have been met. That leaves the loan and Zoning approval, hinging on the determination of a “minor change.”

“From the standpoint of is the project changed substantially the answer is no it has not,” Lightfield wrote. “It could fall under a minor change since the parking, number of units etc. remain the same. It does not exceed the height and FAR regulations, etc. Again, the setback impact on the Wall Street facing would be a question I would ask along with more detail about the arcade.”

“We have been working hard all along to make this project a reality and we continue to do just that,” Olson wrote in a Wednesday email. “We have had some great supporters including Senator Duff and Mayor Rilling and others. We have an excellent highly skilled team in POKO and our current professionals. We are going to transform that neighborhood, it has always been what we have been trying to do and now ‎everyone will see it happen.”

“I’m looking forward to the addition of this project in the downtown,” Lightfield, who is chairwoman of the Wall Street Task Force, wrote. “It’s got a nice retro urban feel to it, and is the kind of housing that appeals to young people. Since the project was approved, automated parking garages have been trending up. In L.A., a very car centric environment, automated garages are the new amenity in luxury buildings. I’m excited that Norwalk will be the home of this high tech garage, and that this solidifies the entrepreneurial and start up culture we’ve been cultivating.” 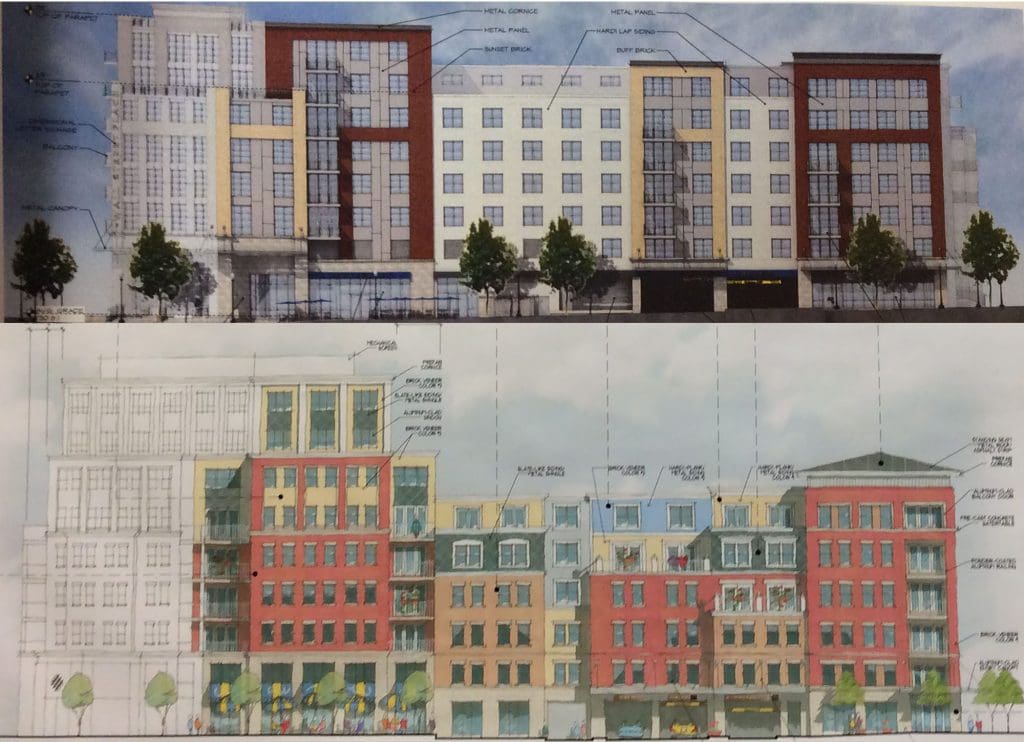 I echo Jackie Lightfield’s comments for the most part. This is a minor change, as the number of units hasn’t changed, and less hallways and better connection to the street are welcome positive changes. Too many hallways are never good. We can’t wait for this project to get built! Good news to bring in the new year for sure.

I wonder if Tom Sheehan, in his discussions with infrastructure improvements with Poko, was aware that the Bike/Walk Task Force has identified Wall Street, in the new Norwalk Bike Plan just completed, as a major bike corridor between West Ave and East Ave, basically connecting two sides of the city together where many folks bike now despite the dangerous conditions. Since retail revenue improves up to 20% on streets with bike lanes, which also slow speeding traffic making it safer for pedestrians and cars too, this will become an important transportation amenity new and existing residents of all ages (and new businesses) will be looking for in coming years.

Based on references in existing studies, modern urban design, and common sense, it is vitally important to design bike lanes (or sharrows, but bike lanes preferred) into this project, including using reverse angled parking which is catching on in cities across the country and has been used around the world for decades because it’s so smart and safe. There is no reason it wouldn’t work on Wall Street where there is angled parking partially in front of the Poko project in the block from West Ave to Isaac St.

Here is a video that shows how it works, from Austin TX where it is being used now:

As you can see, it involves the same exact action on the part of drivers as they already do with parallel parking, in terms of stopping slightly ahead of the empty space with your signal on, and simply backing in as you would a parallel space but with a sharper turn. It’s actually easier than parallel parking, and much safer than traditional angle-in parking where you are forced to back out blindly into bikes and traffic, which is where statistics show many accidents occur.

The will have to be sharrows further down Wall Street where space is limited, but there is room for bike lanes from Smith Street up the hill almost to East Ave to connect eventually with new bike lanes on the crucial Park St/France St/West Rocks corridor that goes all the way up to Main Ave by iPark, and with sharrows on East Ave to the Sunset/Beacon corridor that goes from East Ave, behind City Hall, to Strawberry Hill Ave.

The point is, we have an identified biking network now through numerous studies and hard work by many, and Poko and Wall Street are included in this network that must be part of the design process at this time. I’ll be contacting Tim Sheehan and other officials about this to reiterate our position from a public safety and visionary point of view, but thought it would be helpful to mention here on NON.

To Jackie’s other point about how other projects blend in with their existing streetscapes, I do agree about Poko, but do not see as big an issue with Waypointe and Head of the Harbor as she does, as the former basically created its own streetscape where none existed (and it’s far from completed as there are no retail spaces yet on the ground floor which will change the look quite a bit), and the Head of the Harbor project also has no existing streetscape to relate to on Smith Street, and to the extent there is a need to “blend in” at all, the context of that block is much older with the older brick buildings on that block of Wall and at Mill Hill.

I also see less need to “blend in” as the rich urban character that makes cities so visually exciting relies on contrast of style and era as much as any uniformity, but I don’t discount at all Jackie’s point that our new projects need to respect the urban fabric they exist in. Much of this is subjective anyway and not worth arguing about, as I would prefer sleek modern glass buildings over historical pastiche any day, to contrast with our existing historic buildings, as now occurs with great success along the High Line in NYC or in any number of modern cities around the world. I love the interesting juxtaposition of the modern building of Louis Kahn’s concrete and wood masterpiece, The Yale Museum of British Art, with the neo-Gothic Yale Museum of Art across the street, on Chapel St in New Haven. No blending in there for sure.

But hey, if we’re in Norwalk CT, where a more conservative mindset for “safe” design is at work, then I accept that. Once the street trees surrounding these buildings grow large these issues become less important anyway, spoken as a true landscape architect would! We need green canopy as much as anything to create healthy and inviting urban environments, which is what many of us have been working towards for years, including the good folks on the Tree Advisory Committee.