The news comes after Freddie Mac finally came through with a commitment to provide a “permanent takeout” for Citibank’s $13 million construction loan to POKO, the missing financial puzzle piece that has held up the Wall Street Place project and inspired Common Council members to declare POKO in default of its Land Disposition Agreement (LDA) for the Wall Street property.

The conversation developed as Redevelopment Agency members considered a conditional agreement with POKO, which was approved by the Council this week. The Agency unanimously approved the agreement, stressing that it expires July 31. POKO is on the hook for $1,000 a day, backdated to July 1, as a penalty for not having its construction loan in place as stipulated.

The Council and the RDA voted last August to give POKO an extension on its 10-year old LDA, with numerous deadlines written into the extension. The most important of these was closing on the construction loan by Jan. 31.

The Freddie Mac component was discussed July 6 by the Council Planning Committee.

“You have an underwriting department dealing with a particular transaction that is literally one of a kind on their books throughout the United States; who knows where they are going to be raising a red flag, or a white flag, whatever caution flag it might be,” Corporation Counsel Mario Coppola said. 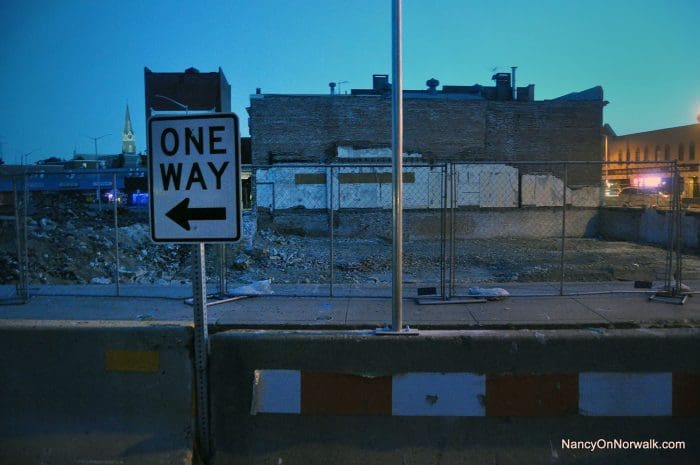 It’s one way-only on Isaac Street now that POKO Partners is doing work on its Wall Street Place property.

Sheehan said at last week’s Council meeting that he had been told that the Freddie Mac loan commitment should come by Friday. “That would put your closing close to the end of the month,” Sheehan said.

On Tuesday, Sheehan said, “The Freddie Mac credit commitment has been forwarded to Citibank. Citibank has prepared the documents. Freddie Mac is accepting of the documents. So from Citibank’s standpoint, their ability to actually have a permanent takeout on this has essentially been cleared.”

A takeout lender issues a mortgage that replaces a construction loan, according to Investopedia.

Citibank won’t close on the financing until all of the state’s financing documents have closed, Sheehan said.

Connecticut’s Department of Housing and Department of Economic and Community Development have accepted all the documents but are waiting for one document to take its final form, Sheehan said. Once the documents are completed they will be submitted to the various departments that are involved for review; they will then go to the Attorney General’s office for final review, Sheehan said.

“We are anticipating that that’s going to take at least three days to get through that process,” Sheehan said.

There’s another issue: the Citibank loan officer in charge of this project is going on vacation in the last week of July, Sheehan said. That’s Monday.

“We are hoping that the state can speed up the process a little bit and get to a closing potentially this week,” Sheehan said. “All documents and commitments are all in place at this point.”