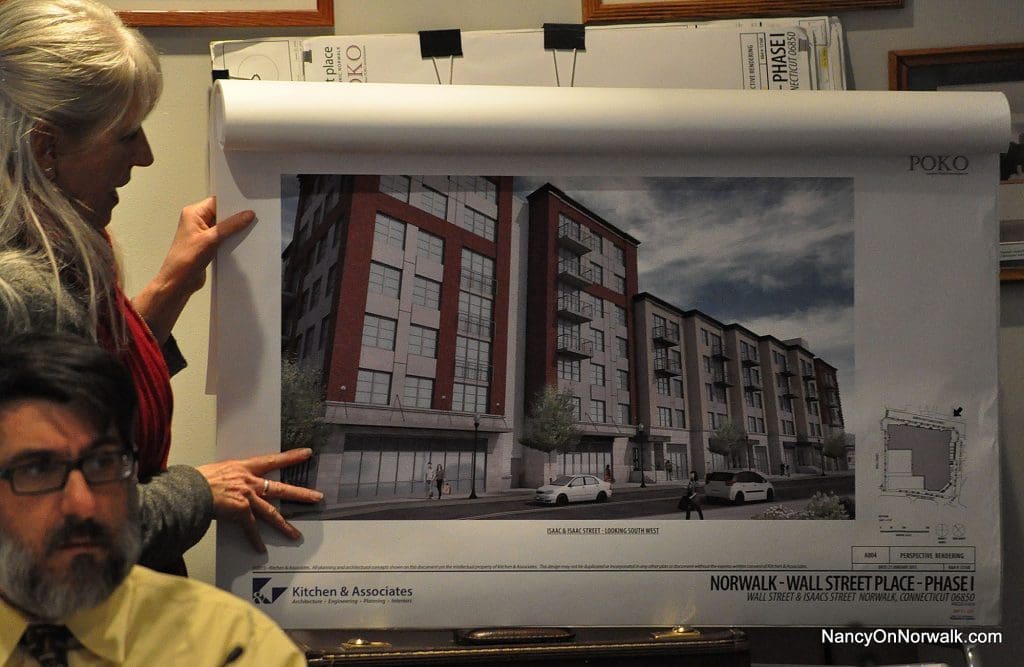 NORWALK, Conn. — If you have been assuming that POKO Partners’ Wall Street Place project is kaput just because Norwalk has declared the developer to be in default of its agreement with the city, then you have been mistaken.

Redevelopment Agency Executive Director Tim Sheehan on Monday night read Planning Committee members a letter he said was from a Citibank executive saying that POKO has been greenlighted for its various construction loans, but it might take as long as May to close on the financing. This left committee members expressing confusion about the circumstances of the various time periods specified in the Land Disposition Agreement (LDA) for the Wall Street property, and a request for a meeting with the city’s lawyers.

“I told you this guy would do shenanigans and shenanigans we got,” Planning Committee Chairman Doug Hempstead (R-At Large) said to Sheehan.

Hall reportedly said it “is simply not feasible and probably not possible for Citi to close on the Phase I of the construction loan in the 30 day period” specified as POKO’s window to show a reasonable effort to cure the default, in the legal language of the default letter written by Redevelopment Agency Attorney Marc Grenier and Corporation Counsel Mario Coppola.

“Given the project complexities, including the need for a land loan extension, placement of low income housing tax credit equity, a construction loan and multiple term loans covering several different uses, we will require a certain amount of time to complete our full credit review and underwriting process,” Hall reportedly wrote. “POKO provided the additional funds necessary to bring interest and fees current on the existing land loan with Citi on Feb. 25th. That was a threshold requirement for our having the ability to extend the land loan.”

“Can you also find out if the $5 million the developer used to make himself whole with the bank was the $5 million the state handed him, or out of his own pocket?” Hempstead asked Sheehan later, after requesting Sheehan get information from Coppola.

Hall’s letter reportedly said that POKO’s formal request for a 90-day extension had been approved on March 4, with an additional 90-day extension possible if it meets with Norwalk’s approval.

“On today’s regular Citi investment approval committee meeting, the Wall Street project construction loan received green light approval as did the request for Citibank to invest Low Income Tax Credit equity through the national equity fund, the selected tax credit syndicator,” Sheehan quoted Hall as saying. “Three separate term loans also received green light approval today for the restricted affordable low income housing credit residential portion, the workforce market residential units, and finally for the commercial retail parking element. With those approvals, we will go into a full project underwriting including a new appraisal of the project as proposed and a formal plan and cost review process. I expect that, barring any unforeseen challenges, we will close by end of April.”

The thing surprising the Council members here is that POKO is not automatically disqualified from continuing by missing its deadline to show construction financing by Jan. 1, the 150-day threshold written into the LDA extension granted in August. POKO has 30 days to show an effort, then 60 business days to completely “cure the default,” for a total of 90 days before it could enter the court process.

That would be April 2, Sheehan said. Again, Hall said in his letter, according to Sheehan, that the earliest Citibank could close would be late April.

Hall asked for an additional 60 business days to allow Citibank to complete its process.

“I believe the plan as currently proposed is site superior to the original and that the timing for it is good,” Sheehan quoted Hall as saying. “I hope the city of Norwalk is able to provide the additional time that is necessary for the underwriting and the closing of the construction loan, and we can all look forward to a belated ribbon cutting and a development that will serve the citizenry of Norwalk well for many years to come.”

The confusion about timelines followed, as Sheehan said over and over again that the Council members need to consult with Coppola.

Hempstead said that POKO would again be in default at the 250-day threshold, as the problem compounded. Bruce Kimmel (D-At Large) said that was a good point, but answers were not forthcoming.

“I can’t interpret the LDA legally for you, you need to have Corporation Counsel,” Sheehan said, causing a teasing, “C’mon,” from Hempstead.

“I always interpreted on 150 days, ‘Have a nice day,’” Hempstead said. “That was the language.”

Finally, John Kydes (D-District C) asked what would happen if POKO didn’t get its loan. Sheehan said that the committee would take action in its scheduled June 27 meeting; the city would have no obligation to complete the infrastructure improvements that it has agreed to and “We would move the default, then basically claim the default then wait for a response.”

“Assuming the city doesn’t accept the developer’s claim for remediation or arbitration, you’re back in the courts. That’s a legal process,” Sheehan said, demurring on the time frame for that one. “Assuming there’s success and they do get to mediation and arbitration, it’s laid out in the LDA the time frames associated with that. I think you can safely contemplate that that’s a six- to eight-month window.”

To my point that the Redevelopment Agency should be abolished.