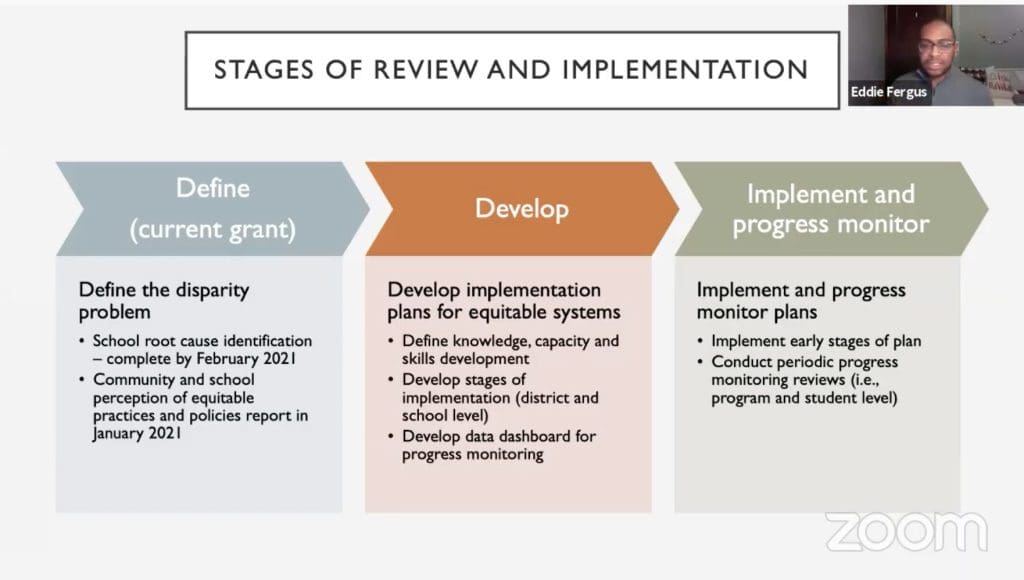 Edward Fergus, Ph.D., presents information gleaned through the equity and education study he is facilitating for Norwalk Public Schools, Tuesday during the Board of Education meeting.

NORWALK, Conn. — Norwalk Board of Education members got their first look at some of the findings of the “equity and education initiative study,” conducted by Edward Fergus, Ph.D., of Temple University, at their workshop meeting on Tuesday. Fergus emphasized that there was more data to come, particularly from the focus groups which were more diverse than the survey participants.

“I want to be mindful of that as we sort of start looking at some of the data in terms of what this survey data is telling us,” he said. “And I’ll talk a little bit more later about the significance of the focus for data where we have greater diversity.”

The study found that among parents and community respondents there is a “varied perspective on racial diversity comfort and colorblindness.” Fergus and his team received 1,407 responses from community members and parents, with 950 answering more than 90 percent of the questions.

More than 84 percent of parents and community members who responded said they “strongly agree” or “agree” with the statement: “I feel comfortable with people who are a different race or ethnicity than I am.” More than 70 percent said that they strongly disagreed or disagreed with the statement “thinking or talking about race/ethnicity makes me feel uncomfortable.”

Views were more varied when it came to questions related to “colorblindness” and “erasing race.”

For the statement: “Sometimes I wonder why we can’t see each other as individuals instead of race and ethnicity always being an issue.” Out of 914 responses to this question:

Another statement that caused a variation of opinions was “Racism would cease to exist if everyone would just forget about race and see each other as human beings.” Out of 911 answers:

“So there is a comfort with — I like diversity. I like the food and festivities,” he said. “But there is a greater level of ambivalence as to the degree to which, you know, perspectives that speak more directly to how they understand particular groups.”

Fergus again emphasized that there would be more data coming from the focus groups that are “more diverse” and that it was important to keep in mind the demographics of who answered the survey.

“I know that some of the dialogue … that in these conversations around equity, there is going to need to and there has been a continued dialogue regarding equity as it pertains, in particular, racial ethnic groups within the school district,” he said.

The survey also asked parents how well their child’s school has been doing in a variety of areas, such as how effective the school is at communicating with them and how well it provides information to help students plan for the future.

Parents also expressed their levels of satisfaction with the school, teachers, and standards their students had last year. About 85 percent said they were “extremely” or “moderately satisfied” with both the school their child attended and the teachers the child had.

“By and large, most of our parents have been — they were moderately or are really satisfied with how things have been going, or their child, the school itself, the teachers and the standards,” he said/

Board member Godfrey Azima asked how they are working to get student voices involved in this process.

Fergus said that they’ve been conducting focus groups with some students and there’s an “interesting narrative” coming from the students about not being heard.

“Basically, what we’re finding is that the kids are hearing the story of, ‘we’re not being heard, we’re not being listened to,’ when we identify that there is any inequality. And, and that’s why the survey we’re referencing to here — we specifically have more open-ended questions in the survey, so we can hear some more of that from our kids,” he said. So we know that there is a strong energy among a group of students who really want to be heard.”

The study found that most of the 320 staff members who answered the survey had a “comfort with people of different race or ethnicity than themselves as well as talking or thinking about racial diversity.” More than 75 percent said that they disagreed or strongly disagreed with the statement: “Thinking or talking about race/ethnicity makes me feel uncomfortable.”

Opinions were more divided over racial differences and areas related to “colorblindness.”

“I would say, everybody comes from the best place that they know, in terms of responding to that,” Fergus said about that particular statement. “But the concern is that … you can have a level of comfort with diversity … but yet at the same time, also hold this idea, ‘I don’t want to see skin color. I try not to see skin color.’ And so there’s tension around that, that prevents us from actually seeing the true diversity, if there is an absence of this or desire to kind of have a level of, of not thinking through sort of the dimensions of a particular person’s identity.” 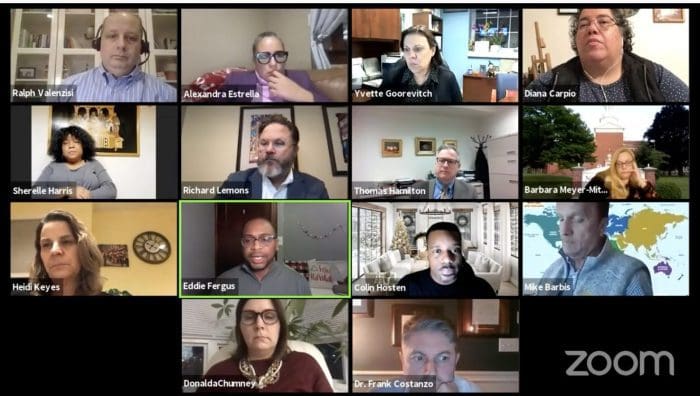 Tuesday’s Norwalk Board of Education meeting.

Fergus said that there’s some similar distribution in how comfortable staff members are with issues of equity and diversity.

“It’s the, ‘I liked the paella, and I enjoy, you know, soul food,’” he said. “But there’s an ambivalence as to whether or not there is a comfort with discussing, or engaging into more complicated conversations around equity, that speak to understandings around bias, stereotyping, and discrimination.”

Fergus said that many people hold both beliefs — that racist acts happen but that there isn’t institutionalized racism, and one of the things that they plan to work through is showing how some systems, whether intentional or not, exclude people and what needs to be done to make those systems equitable for all.

“Folks are holding on to the idea of, ‘yeah, I know, racist acts, racist incidents occur, but I just don’t believe institutional racism happens,’ right, and what we were trying to sort of gauge and respect is that folks hold both ideas at the same time,” he said. “That racism acts happen, (but) I don’t believe institutionalized racism occurs, right. And as a point of reference for us, if we’re going to talk about and contend with equity, part of sort of addressing equity means that we’re going to have to reconcile that there’s ways in which our systems operate, whether it’s through the degree of capacity or coherence, that lend themselves in such a way … whether explicit or implicit sort of exclude, and include others. We’re going to have to arrive at a place where we reconcile that there is some institutionalized nature in which our mechanisms operate.”

The demographics breakdown of the staff were as followed:

“Were you surprised that the low is relatively low response rate from staff? That seems pretty low,” he said I mean, we’ve got over 2000 employees and 200-300 people? I mean, 10 percent response rate, just compared to parents, that seems low.”

Board members asked that the survey be reopened and building leaders push to get more responses.

While the survey results were being put together, building principals are working on identifying “root causes” of injustice, discrimination, and racism in their schools that can be addressed as the process moves forward.

Fergus said the next steps will be getting the transcriptions and analysis from the focus groups and putting that together with the survey results for a “community and school perception of equitable practices and policies report” that will be released in January. Some of the focus groups were specifically targeted for under-represented populations, student groups, and sessions with NorwalkActs. Fergus said they’ve had more than 30 focus groups.

From there, Fergus said the next steps will be to develop implementation plans to create equitable systems across the schools.

“This is just the starting point of several conversations that will lead to the data that we need qualitative and quantitative, to help us redesign a new strategic operating plan,” Superintendent Alexandra Estrella said. “So hopefully, tonight was a night of an abundance of information that hopefully you can further digest and formulate additional questions as we continue to embark in this journey of developing our new plan.”

At a recent past Candidates Forum run by CONECT (Congregations Organized for a New Connecticut) I believe every candidate running for the BOE pledged to support the continuance of special programs to advance diversity understanding and training from the top down-ie BOE, NPS Teachers and Staff and ultimately to the student population. The intervening pandemic has certainly been a complicating factor but I would be interested to know what the BOE has done to live up to that pledge.
The above referenced study should be a valuable resource in planning future efforts to achieve a better understanding, dialogue and relationship within our diverse school and city population. I look forward to the focus group update.

We thank the 53% of staff that responded. We should fire the 47% that didn’t respond as obviously they don’t give a damn.
Regarding color blindness: It has come to my attention that teachers will not go over unwritten racial quotas when disciplining students. The additional paperwork and scrutiny are not worth the trouble. Just a guess, but I’m sure the students know this and act accordingly. Is that color blindness? Is that really helping those kids long term?
No where in the questions above do we discuss respect and accountability of the students. Should we assume that’s not a problem or is that not expected going forward?
Regarding students not being heard — If you go back 1,000 years I’m guessing that was the case then and will continue for the next 1 000 years. Maybe we need to ask graduates who are now out in the working world what worked and what didn’t work during their academic careers in Norwalk.
I understandthe current political climate calls for finding systemic racism wherever it may be, and that’s a good thing. However, to manipulate the process to fit an agenda is not only wrong but counterproductive.
One last thing — Wouldn’t it be nice if our diverse educational system here in Norwalk got as much funding from the state as say lily white West Hartford? We just elected the same officials who have done Nothing to truly fix that. Please don’t listen to Bob Duff exclaim he’s done that. The changes he’s help push are nothing versus what’s needed. He knows that and anyone paying attention knows that..BUT somehow even when he’s lying he has his supporters. They must enjoy his ice cream

While my son was in school books such as “A Peoples History of America” and “How to Be An Anti-Racist” made the reading list.

How about someone picks up Douglas Murray’s “The Madness of Crowds: Gender, Race, and Identity”.