The floorplan for a proposed entertainment business in SoNo. 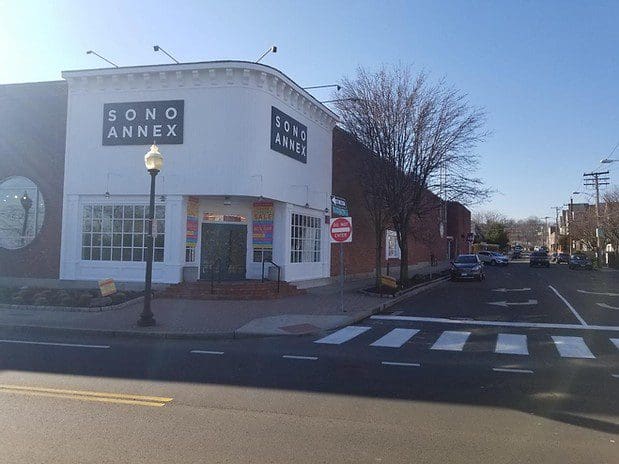 “You want me to think of axes as darts?” asked Norwalk Zoning Commissioner Nate Sumpter.

Such was the dialogue Wednesday when Norwalk’s Zoners reviewed District SoNo LLC and SoNo Square Associates’ plan for a 28,000-square-foot family entertainment complex in the former Lillian August space at 85 Water St.  The proposed facility would incorporate golf simulators, a fencing school, an open-kitchen restaurant, axe throwing lanes, a brewery, a food truck parked outside, and a children’s craft and party center called “Sparklicious.”

In 2019, a Zoning permit and subsequent extension were issued to a previous applicant whose plans for a similar facility at the site fell through.  Now, a new operator represented by Suchy is asking the Commission to allow “some slight changes,” under the original permit, notably the addition of axe throwing and Sparklicious, which would be separated by a wall.

“I’m wondering if this is a ‘minor change,’” Sumpter said.  “Have you been anywhere where they throw axes and they have children there at all?  I don’t see Sparklicious and axe throwing in the same place.”

“The kids can actually throw the axes,” project architect Chris McCagg said.  “In other venues, if you research this activity and sport, it’s not limited to adults.  Not infants, but younger children participate in this activity.”

Commissioner Galen Wells questioned the wisdom of having “axe throwing, liquor, and children all in the same venue.”

Suchy said, “They’re separated out and it’s not an area where they’re right in the middle and just go nuts throwing axes willy-nilly.  It’s a defined area.  It’s controlled…All sorts of controls are required for obvious reasons.”

“Each of the lanes is separated with wood and wall,” said building owner affiliate John Greenspan of David Adam Realty.

“I hear you, John,” Sumpter said.  “But I don’t think of axes as darts.  Not where I come from anyhow.  Maybe in your neighborhood they’re the same thing.”

Commission chairman Louis Schulman asked for the name and location of a nearby axe throwing venue that the commissioners could visit.   McCagg said he thinks there is one in Bridgeport, and will obtain the information.  Wells asked, “In this day and age of COVID, would these places be open for us to go see?  I sort of doubt that.”

Schulman asked Norwalk Planning and Zoning Director Steve Kleppin whether the Commission’s approval could stipulate an axe throwing age restriction.  Kleppin thought not.  “We don’t have the ability to go in and check IDs,” he said.

Goldstein asked for a rundown of safety precautions and operating hours for the various entities within the complex.  Suchy said, “I’m sure between Chris, myself, and Mr. Greenspan, we can get you that information.”

The discussion moved on to parking. Two lots, one across Water Street alongside SoNo Seaport Seafood, and one around the corner from the venue on Day Street will satisfy the parking requirement.  The Day Street site is currently an empty lot which Suchy said will be converted to 52 parking spaces.  Schulman asked whether use of that lot would be limited to the facility’s patrons.  Suchy replied, “I don’t think that my client is interested in putting up a gate or anything of that nature that would be used in conjunction with the uses that are proposed for the site itself.”

“What about the other lot, the Water Street lot?” Sumpter asked.

“There are no plans at this point, as far as I know, for my client to resurface that. It’s in pretty good condition” Suchy said.

“I don’t think that one is in the best condition,” said Sumpter.

The plan includes reconfiguring some of the Elizabeth Street reverse angle on-street parking spaces to accommodate a food truck and tables on a grass area. The truck would be on the property owner’s land, McCagg said.

“The concept here is that they have kind of a supplemental guest food truck, you know — like axe throwing — a big thing in the young adult kind of socializing and social media is following these gourmet food trucks around. They all have followings,” McCagg said. “And one of the things that’s very interesting about the new owners of this venue is that they’re kind of a conglomerate of restaurateurs and recreational facilities like this. They’re very interested in creating and attracting the younger crowds and providing something that they’re interested in and is unique. This whole food truck experience was one of those. Initially we were trying to incorporate the mobile food truck inside but that didn’t work out so well with a lot of the code requirements.”

The Commission agreed to continue discussing the application at its next meeting on Thursday Aug. 6. 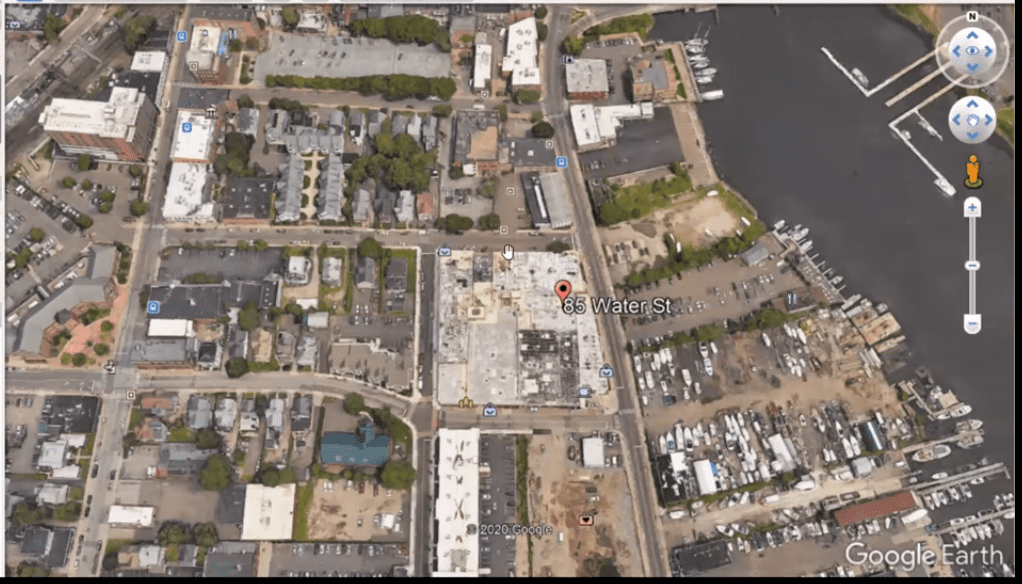 An aerial shot of the area.

Norwalk’s P&Z is so broken and focused on all the wrong things. This article is just another great example of it.

Yeah, I know about ax-throwing, and (aside from the obvious hilarity engendered by locating it in close proximity to alcohol and children) it sounds like one of those 10-minute fads embraced by the mask-free generation. It also sounds like an empty storefront with a big “For Lease” sign about 6 months later. And in the days of Covid, it also sounds like an assumption that the economy will support an audience willing to throw money away, literally. A better use of the space might be…well, anything else.

Here’s to Liz, the longest serving Chair of Norwalk Planning and Zoning.

Worth a look. They are actually still open.

I think this is a great idea and is popular in many parts of the country. Obviously owners will take precautions with safety and I’m sure it’ll be a fun and different experience for
People of all ages. I say let the owners try it!!

Can we just turn this site into a Trader Joe’s and call it a day?

A Concerned Citizen said it best – Norwalk P&Z IS broken and confused! Because they are not familiar with ax throwing, it must be dangerous and they can’t be bothered to do a little research BEFORE the meeting?! They have an agenda before the meeting, they know what they’ll be discussing. Come on, DO YOUR JOB!

I am all for a developer taking a building, trying to repurpose it and getting businesses back in there. Does the Commission really think people are going to be hanging at a brewery, with their kids in tow, chucking around axes in between drinks?! These are all separate uses, separated by things called doors and walls. Where has common sense gone? I honestly can’t believe some of the things coming out of their mouths.

It doesn’t sound too different from Pinstripes, which has a location in the SoNo mall, so I don’t see what all the concern over a mixed use space is…