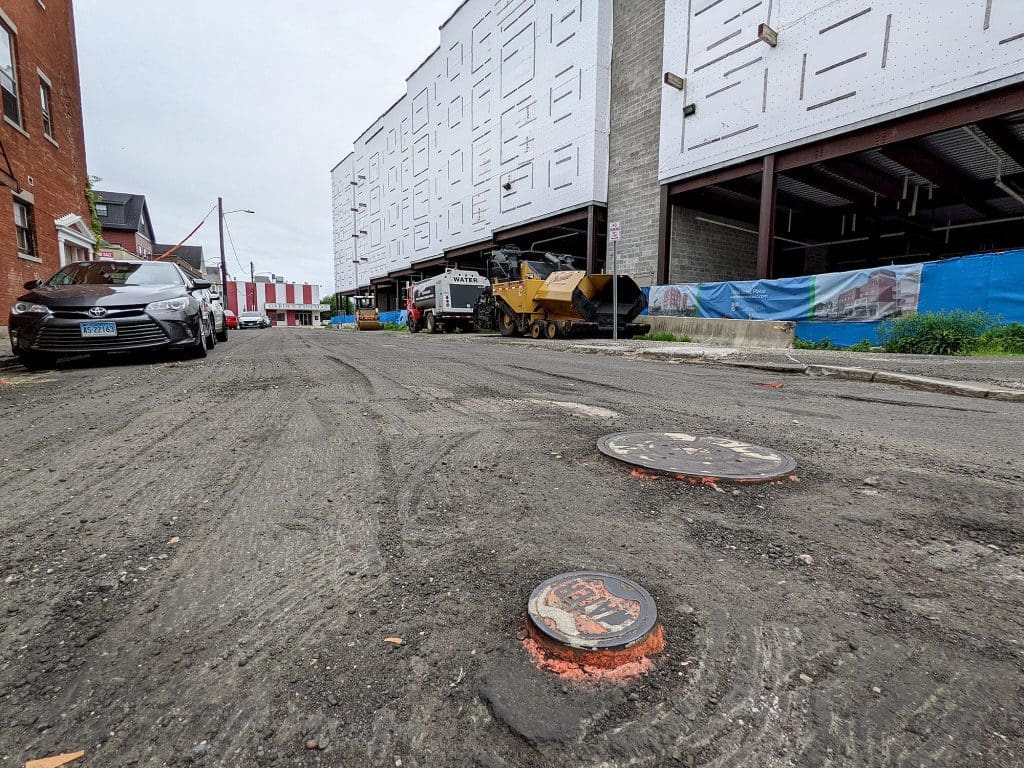 Isaacs Street is in “Area 2,” according to the Department of Public Works paving map, meaning its second on the priority list. 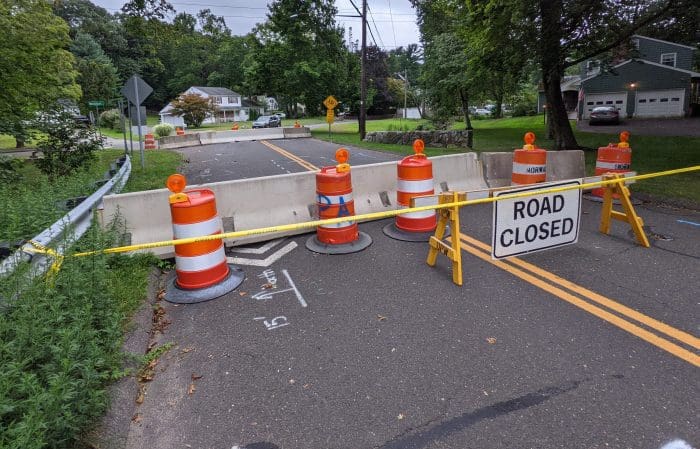 NORWALK, Conn. – A roundup of news from the Department of Public Works: 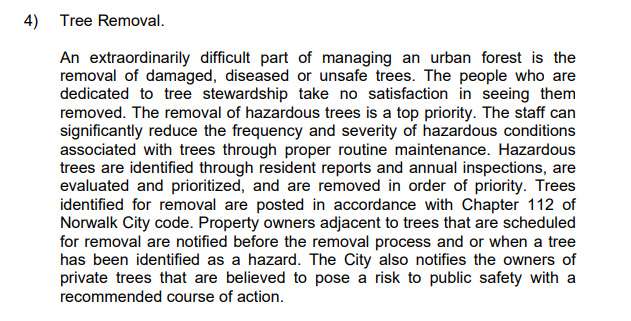 An excerpt from the Norwalk Tree Management plan.

The Department of Public Works is on track to plant 168 trees in the City by the end of the spring season, and if you add that number to the 93 that were planted last fall, you’ll see that 261 trees were planted in one year’s time, Norwalk Chief of Operations and Public Works Anthony Robert Carr said at Tuesday’s Common Council Public Works Committee meeting.

Compare that to approximately 240 trees that DPW removed over the course of the last 12 months, and you’ll see that more trees were planted than were removed,” Senior Civil Engineer Paul Sotnik said.

“We’ve planted more than we’ve taken out, which was I know a major goal,” Sotnik said.

Moreover, DPW plans to plant 139 trees this fall, which would make more than 300 in a year, Carr said. Requests are coming in and it’s possible DPW might hit 400.

“I would say that’s very impressive,” Carr said. “I haven’t been haven’t worked at a municipality where we planted that many trees in a year.”

If it gets up to 400, DPW will have hit its goal of 1.5 new trees for every tree that’s been taken out, Carr said.

Sotnik said DPW’s new tree total does not include what’s been planted by the Recreation and Parks Department, the Norwalk Tree Alliance, the Norwalk River Watershed and the Norwalk Land Trust.

“That’d be the first time ever that that’s happened,” Torre said. “I mean, when I started, we had a $250,000 tree removal budget. That’s how many trees were being removed. So, through education and through outreach, and, you know, just having people that care, we’re on a path that’s the right way.”

City officials found a crack in the roadway near the intersection of Rowayton Avenue and Woodchuck Lane and closed the road 11 months ago. This was after Tropical Storm Elsa dumped more than six inches of water on Norwalk within 24 hours, four inches of them within five hours, Senior Civil Engineer Paul Sotnik said.

Norwalk Principal Engineer Vanessa Valadares said the underside of the bridge arch was damaged, extending into the bridge structure.

It had been inspected two years earlier, and it was found that, while the bridge had sustained deterioration, it was not to the point of requiring immediate repairs or closure, she said.

DPW formulated a plan to replace the bridge as soon as possible. Carr said Tuesday that precast box culvert is expected soon, and this will go under the bridge as the Keeler Brook’s passageway.

“Once the culvert arrives on site, the rest of the work is going to go very quickly,” Carr said. “Because in the last prior few weeks, we’ve been relocating some of the existing utilities, specifically the water in the sewer. And if you see big pipes in the ground, it’s just because we’re bypassing water around so the contractor could work and successfully install the water and the sanitary sewer relocations. Because where they existed previously, those utilities, they can no longer exist because the new culvert is a little bit wider, a little bit longer.”

He said, “We’re just waiting for this delivery, which is expected to be I believe, next Monday or Tuesday, June 13, and the contractor will start work. But we’re very hopeful. And barring any unforeseen condition that we possibly can predict where we’re looking forward to opening the bridge up to traffic before the Fourth of July weekend.”

The need for an Army Corps of Engineers permit is part of the reason it’s taken almost a year, he said.

“Once you go down and see it, you’ll, you’ll see why it took us as long as it did,” Carr said. “And a few weeks after it passes, I think everyone will appreciate the aesthetics that it’s going to, it’s going to enhance the character, and the aesthetics of the neighborhood.”

Making it easier to check on road paving

It’s easier to check on the City’s paving projects now thanks to an upgrade to the Department of Public Works’ paving webpage.

The paving forecast was “based on a map and a table” but now there’s a color-coded map and a list that will be regularly updated, “at least weekly,” Norwalk Chief of Operations and Public Works Anthony Robert Carr said Tuesday.

The “paved road status” information is currently dated May 20.
“Anybody can go online and see, ‘OK, DPW proposed to do 25 streets, they did 27,’” Carr said. “…It will show, for us too, our metrics of ‘here’s what’s proposed and planned’ versus what was completed.”

The color codes are explained in a legend; Area 1 is top of the list, barring unforeseen circumstances, Carr said.

Still to come is a reposting of the 5-year paving forecast.

‘Less at the curb’

As of April 21, Norwalk is collecting less trash and recyclables than it was a year ago, Norwalk Chief of Operations and Public Works Anthony Robert Carr said.

“We are returning back to normal conditions, which I think is a good thing for everybody, because there’s a lot of other things that are likely returning to normal as well,” he said Tuesday to the Common Council Public Works Committee.

Garbage route collections were down 3.5% from what they were a year ago and the total monthly municipal solid waste (MSW), “the sum of what’s collected on the along the curve, plus what people drop off at the transfer station,” was down about 15%. Recycling materials are down about 8%.

“What it tells us qualitatively is that there’s some normalcy, maybe there’s a new norm, but the effects of the pandemic are at least waning to a degree where people are not home as much,” Carr said. “Either that or they’ve learned to stay home, but use a lot less garbage. I’m thinking it’s more towards the former or the first, that people are back to work again or at different jobs or doing different things, but they’re not generating as much waste at the same point last year.

He added, “Garbage tells a story. People want things out on the curb and gone when they wake up the next day. And there’s something to be said for that … Seeing these numbers does tell a bit of a story that we returned to some normalcy. And that’s different for everybody, of course.”

Public Works Committee Chairwoman Barbara Smyth (D-At Large) noted, “I certainly have less people living in my house now…. We’re putting a lot less out on the curb because, you know, we had a household during COVID.”

When General Growth Partners (GGP) bought the land and entered into a Land Disposition Agreement (LDA) with the City, “we were fully aware that there was remediation that would be necessary on the site and environmental loose ends that would need to be tied up,” Callahan said to the Public Works Committee.

“Now that the site is fully developed and, you know, virtually every square inch is either foundation or sidewalk or asphalt, there’s really no direct, other than maybe very, very minimal, access to the subsurface conditions from a practical standpoint,” Callahan said. “Nonetheless, in order to comply with DEEP regulations, they do they have one or two options, and the most, the only practical option is environmental land use restriction.”

“There’s certain uses that would be prevented and prohibited because of the environmental conditions on the parcel,” Carr said. “… In the future, if we want to maintain our right to repair the site’s utilities, in the event they become damaged or in the disrepair, we can do so by having this agreement in place.”

Brookfield would agree to not breach the concrete and asphalt barrier without jurisdictional oversight and this agreement would continue with the property, Callahan said.

“It’s actually to our benefit to agree to subordinate it, ultimately, they need to do it. And you know, so it’s a no brainer for us,” he said.

The Council entered into a ELUR with Head of the Harbor South in March, 2021.

Waste Programs Manager Jessica Paladino left Norwalk’s employ in April to become Deputy Commissioner of Public Works for New Rochelle, N.Y., according to her LinkedIn page. She had held her job here for eight years.

“I believe it’s an opportunity to optimize our waste reduction programs,” Lauricella said. “Having her gone is an opportunity to make the public feel more welcome. And groups like mine, the Norwalk Zero Waste Coalition, be welcome and share our ideas similar to what we attempted to share back in February of 2020 and also throughout the last roughly seven years.”

Lauricella said she’d like to share her thoughts “about the qualities needed in such a public facing job as the Waste Management and Recycling Coordinator,” in an “offline” conversation with Public Works Committee Chairwoman Barbara Smyth (D-At Large). “… We want to make sure that the right person who likes to work with the public, is creative in public participation and education, is tapped.”

Norwalk Chief of Operations and Public Works Anthony Robert Carr later commented that DPW would like to expand the food waste pickup program to the Cranbury area but was waiting for Paladino’s replacement. He said, “I would like them to enter the City and be employed and have them on the team before we advance that initiative, because they’re going to be a key component in standing up that location.”

Kudos to DPW and its tree-planting plans and actions. It’s a very good start in understanding how best to steward our local environment, along with the many excellent environmental groups Norwalk is blessed with.

For waste management, I nominate Diane Lauricella to head up that office. As a member of the Norwalk Zero Waste Coalition, I can think of no better gift to Norwalk than Diane at this time.

As for more or less garbage being collected, reminders to all residents to create less waste is a worthwhile effort the city could do at all times.

Anyone in City Hall paying attention to the sharply deteriorating northern section of the heavily trafficked West Rocks Road between the Middle School and the Wal Mart shopping center ? A perpetual paving project. Worst roads we’ve seen in the City in generations. Frequently closed too. Winter is coming !

Maybe I’m being selfish but I would prefer DPW to brag about more paved roads than a few extra trees. But then again with President Biden at the controls we all will probably be driving a whole lot less. I’d like to also thank CT legislators for the .25/gallon discount. I felt great “only” paying $5.00/gallon this morning. Keep up the good work everyone.