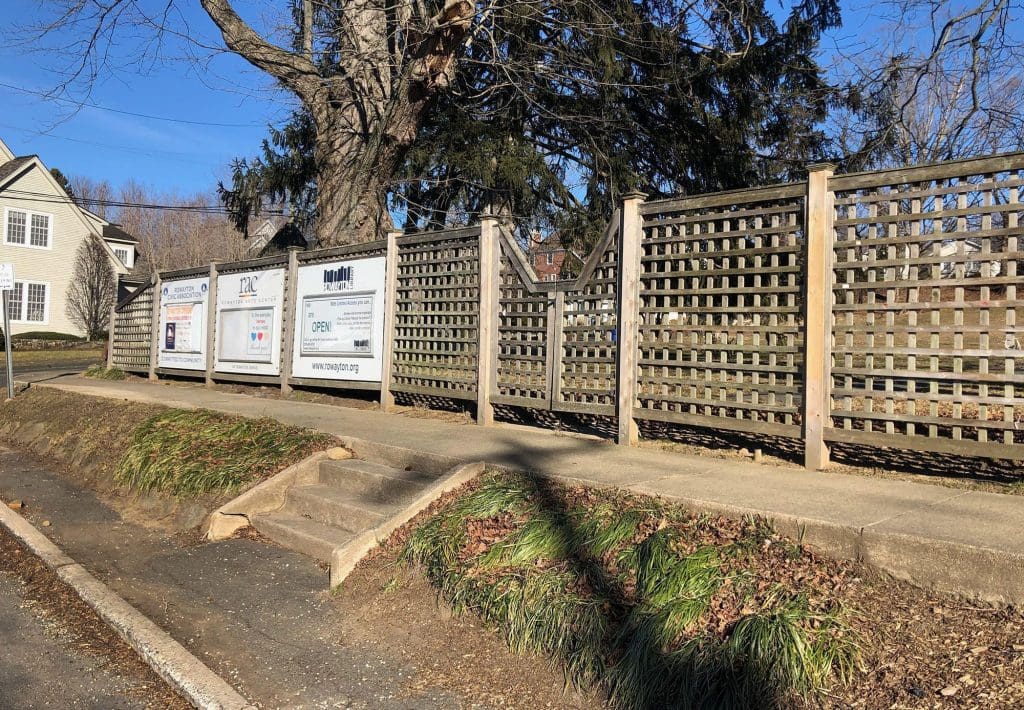 NORWALK, Conn. — Two Rowayton residents say they weren’t allowed to vote in a recent Sixth Taxing District election held to resolve a flap over the posting of a Black Lives Matter sign on a community fence.

“I was disappointed at not being able to cast a ballot on the 13th.  So was my 86-year-old mother.  We are unable to attend to such things in person due to her age and some of my medical conditions and Covid-19,” Clare Schoenwald wrote.

Schoenwald provided email exchanges to show that she requested a ballot and was assured – twice – that it would be sent the morning of the vote, Jan. 13.

“On the morning of and throughout the day, neither of us received this email.  I checked our inboxes, spam and junk folders.  Nothing,” Schoenwald said.

Andrea Woodworth, who, according to the emails provided, promised to send ballots, did not respond to an email asking if they were authentic or how many other people might have asked for ballots without getting them. Nor did Sixth Taxing District Commissioners Tamsen Langalis, Mike Barbis and John Igneri.

More than 600 Rowayton residents cast ballots in the Jan. 13 vote concerning rules for the Old School Fence, where Jane Seymour posted a Black Lives Matter sign in July only to see it vandalized with the words, “Who cares?” It was replaced, only to be vandalized again, this time with “All Lives Matter,” resident Priscilla Feral said.

Seymour posted a GoFundMe campaign to raise the $160 for a new sign. She raised that and more, resulting in a donation of more than $5,000 to The Carver Foundation of Norwalk. The nonprofit works with Norwalk Public Schools to close opportunity gaps and help youth graduate high school ready for college and careers.

Even so, the Taxing District refused to allow the replacement sign, the original having already exceeded the normal two-week posting period. The commissioners also characterized the sign as political, outside the parameters for messages posted on the community fence.

The commissioners’ ruling sparked a months-long campaign for a rule change. Residents Rob Pratt and Lauren Henry put much energy into a detailed proposal that included a requirement for 100 signatures in favor of a sign like “Black Lives Matter” for it to go on the venerable community messaging board the fence has been for decades.

While that proposal was at the forefront of several Taxing District meetings it didn’t make its way onto the ballot, despite a 6TD email advertising it as late as Jan. 7. Commissioners announced 49 hours before the vote that it had been withdrawn – the options had been increased from two to three, then dropped back to two.

Pratt and Henry did not reply to request for comment. Their proposal had been criticized for its “cumbersome requirement.” Some felt the 100-signature requirement was too cumbersome, and that it didn’t reflect the petition that started the effort in July. It’s suggested that Pratt and Henry withdrew their proposal for being less supportive of Black Lives Matter than the third option: an affirmative statement that the sign be reposted for a year.

The withdrawal of the second option came after a six-week effort to persuade residents to vote for it, a resident said. Confused? So were others, according to Schoenwald, who said people were arguing on social media whether there were three options, two or one, she said.

“I believed last minute decisions to pare down the vote to all or nothing choices which further put people off or confused the matter,” she wrote.

That last minute option two (formerly option three) wasn’t even worded the way it was proposed by supporters but was changed by the Commissioners, one resident said.

The only Black woman speaking up through the controversial process often complained that the Commissioners were holding a vote during a pandemic. The Commissioners promised a vote by email.

Schoenwalk first asked for ballots on Jan. 7 and was told on Jan. 8 that they’d be coming, her emails show. She asked again on Jan. 12 and was assured they’d be sent the next day.

“I’m really not quite sure how I would have eventually voted,” she wrote. “I believe in keeping our small community small and that our community fence should be for the things within our town.  But Black Lives Matter has hit home for me.  It is one of those issues that is not just political, but is also a social issue.   It speaks to the heart of acceptance and a true sense of community for all.  We pride ourselves in a strong community in Rowayton.  So I think it makes us a bit hypocritical if we don’t allow a voice of members of our town to be expressed.  And to embrace the message of Black Lives Matter and welcome the message of ONE community for all. So I think, in the end, I would have voted to allow the BLM Sign to appear on the community fence.” 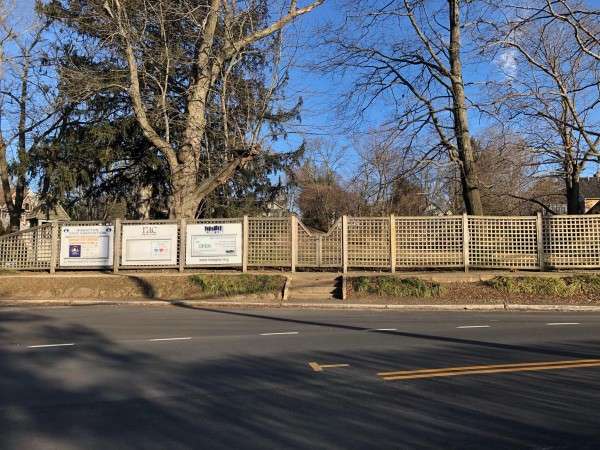 Can anyone cite any other place in town where people can just hang signs on city property and it is permissible?

This whole episode really shines a light on pettiness of self inflated community.

Honestly, it is amazing to me the amount of energy and effort being expended by residents of Rowayton regarding a sign. The sign means nothing. It is a sign. What matters is what the sign represents. I think we all can rally behind the sentiment that Black lives matter, if not the political group that has taken over this slogan and is using it as a political driver. Having been born and raised in Norwalk, and matriculated through its public school system, it is well know that Rowayton has very few black families. This is obviously not the case with the rest of Norwalk. It seems to me that rather than bicker about a sign, the citizens of Rowayton ought to put their money where their mouth is (Rowaytonites have quite a bit of money). How about creating a way for more families of color to be able to afford to live in the district? Invite black youth groups the opportunity to spend summer days on Bayley Beach? How about setting up a scholarship fund at Brien McMahon to help black students attend the college of their dreams? Or sailing lessons at Roton Point for black children from Norwalk? Enough with the sign. It rings hollow anyway in a community with less than 1 percent Black residents. Words are meaningless if there is no action behind them. Take action Rowayton.

No offense but I find supporting a movement from behind gated walls a little disingenuous. It reminds me of Nancy Pelosi taking expensive ice cream out of a $5,000 refrigerator while lamenting about the homeless crisis in San Francisco.
Free Rowayton of “Keep Out” signs and we will take this issue seriously. Until then, grab a bowl of ice cream and enjoy the view of Long Island Sound.

@BAS Clare Schoenwald and I are indeed two different people – who knew?

Does NON not have anything better to do?
How about?
1.) Talking about how unions are driving the how we run education in Norwalk
2.) The ethics violation of the mayor who has a union leader as a wife as his Treasurer.
3.) The zoning violations taking place on CT Ave with Chick A Filet and the fact the officers don’t even get out of their car to direct traffic there.
4.) How about our kids not being educated and what is the plan to catch these kids up?
5.) The fact that town hall has not fully opened?
6.) The fact that the commercial grand list is a mess and the mayor knew this and signed off on it.
7.) The fact that we can’t find competent people to run for the office of Mayor?
8.) Businesses are closing and we have cheap apartments going up all over the place?
9.) The fact that we can’t get ECS funding back to our city?
10.) I have many m ore but I am trying for some civility here. Norwalk is turning into a mess.

@Nora King – What opened your eyes to all of this? At one time you were a Rillings supporter, no?

I appreciate the coverage about the Sixth Taxing District’s fence vote and debacle. It makes some uncomfortable when white dominance is confronted, and a few comments reflect that —especially when they say the topic should be heaved so the Mayor of Norwalk can be bashed to someone’s delight. I disagree with that vitriol entirely.

In truth, there’s a browning of America and an era of activism has arrived , which reflects diversity and a changing demographic in our Rowayton community. I embrace it.

How about embracing Dr. King’s call to judge each other by the content of our character and not the color of our skin and stop all this nonsense which, if truth be told, is inherently racist in and of itself.

“I can’t make people not afraid of black people. I don’t know what’s going on. I can’t explain what’s happening in your head. But maybe if I show up every day as a human, a good human, doing wonderful things, loving my family, loving your kids, taking care of things that I care about—maybe, just maybe that work will pick away at the scabs of your discrimination. Maybe that slowly will unravel it. That’s all we have, because we can’t do it for them, because they’re broken. Their brokenness in how they see us is a reflection of this brokenness. And you can’t fix that. All you can do is the work.”