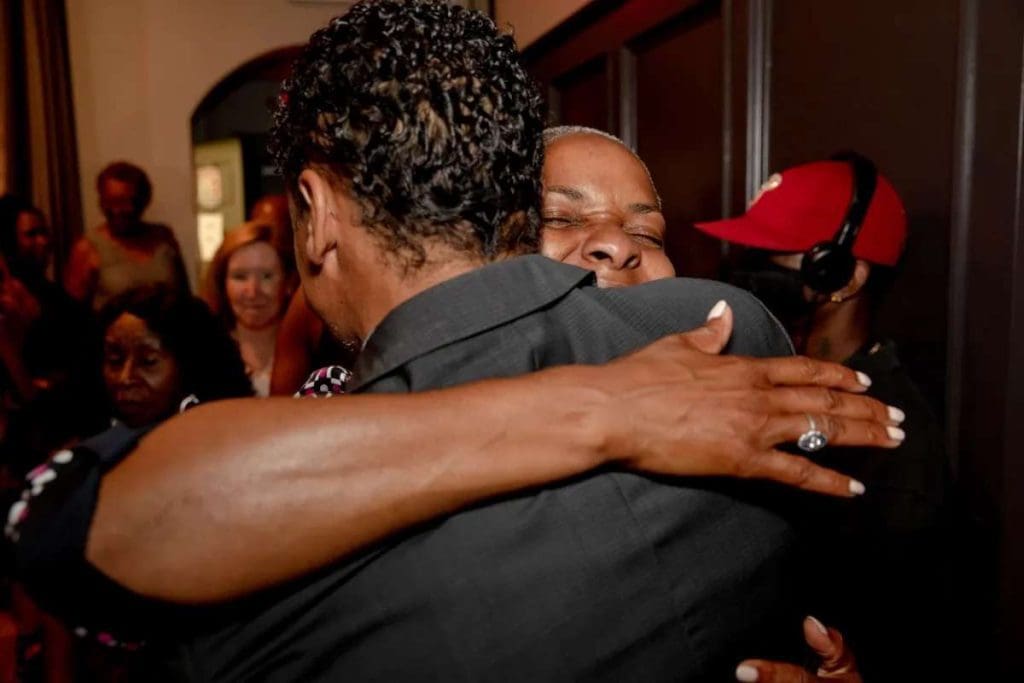 Stephanie Thomas, D-Norwalk, right, celebrates after her opponent in the primary for Secretary of State conceded Tuesday at the Trinity Bar & Restaurant in New Haven. (Yehyun Kim, CTMirror.org)

Republican and Democratic voters in Connecticut chose their parties’ candidates for Secretary of the State on Tuesday, setting up a contest this fall that is likely to focus heavily on voting rights and several proposed changes to the state’s election laws.

On the Democratic side, Stephanie Thomas, a freshman legislator from Norwalk, defeated Maritza Bond, the health director for the city of New Haven, to claim her spot on the general election ballot. Bond conceded the race.

And on the Republican ticket, Dominic Rapini, a marketing executive, edged out Terrie Wood, a Republican legislator from Darien, according to the Associated Press.

Both winning candidates received the endorsements from their respective parties earlier this year.

The contests for Secretary of the State have traditionally not been high-profile races. The person who takes over the constitutional office is charged with two primary jobs: registering businesses in the state and managing Connecticut’s voters and elections.

But that could change this year due to the increased spotlight that is on election administrators throughout the country in the wake of former President Donald Trump’s unfounded claims of widespread voter fraud and his attempts to overturn the results of the 2020 election.

Rapini and Thomas have already focused a large portion of their campaigns on Connecticut’s laws regarding early voting, absentee voting and voter identification.

The platforms for the candidates should provide voters with two clear-cut choices in November.

Thomas, who received the endorsement of former Secretary of the State Denise Merrill, has championed policy proposals like automatic voter registration.

Meanwhile, Rapini, who formerly served as the chairman of a nonprofit called Fight Voter Fraud Inc., has criticized those proposals as “government overreach” and an “unfunded mandate” on towns and cities, which are in charge of collecting and counting ballots in Connecticut.

Rapini has instead called for tighter policing of the state’s voter rolls and advocated for the state to tighten its election laws by requiring voters to present formal photo identification at the polls.

As Thomas took the stage in New Haven Tuesday night, she took a shot at Rapini for his views on election security.

“I would like to appeal right now to all unaffiliated voters, Republican voters, who are looking for an alternative to conspiracy theories and the sowing of disinformation,” Thomas said.

Rapini also cast the election as a stark choice for voters. He emphasized the need for more election security in the state and more cybersecurity upgrades in local registrar of voter offices.

“We’re not just worried about the North Koreans,” Rapini said at his election night party. “We’re also worried about bad actors from within.”Rapini said he would push for a strict voter ID law in the state, and he criticized the state’s current policies, saying voters can currently use a membership card from Costco to prove who they are at the polls.

Connecticut law currently allows voters to provide a variety of documents to confirm their identity before casting a ballot, or they can sign an affidavit in lieu of presenting that documentation.

Voters may be more aware of these issues this year because of recent actions by the Connecticut Legislature.

When Thomas and Rapini face off in November, the question of voter rights will literally be on the ballot alongside both of their names.

State lawmakers from both parties passed a bill in 2021 adding a statewide referendum to the ballot in November. That referendum will give voters the chance to decide whether the legislature should have the power to alter the state’s voting laws and join more than 40 other states that allow in-person early voting.

Rapini said he does not support opening the door to early voting in Connecticut.

“Connecticut citizens may have an emotional appeal for it,” he said. “So I will have to fight against that. But I’m here to do what’s right, and say what needs to be said. I’m not here to pander to the public.”

That position could help Thomas, if the sparse amount of public polling on the issue is correct.

Secure Democracy, a group that advocates for expanded ballot access, commissioned a survey at the beginning of 2021 that polled more than 800 registered voters in Connecticut. The results showed that 79% of the respondents supported early in-person voting.

Roughly 70% of the same people also said they supported Connecticut enacting laws that allowed no-excuse absentee voting. That question will be put to voters in a referendum in 2024.

Whoever becomes the next Secretary of the State could be in charge of implementing those new forms of voting, depending on how the referendum plays out and what the legislature decides.