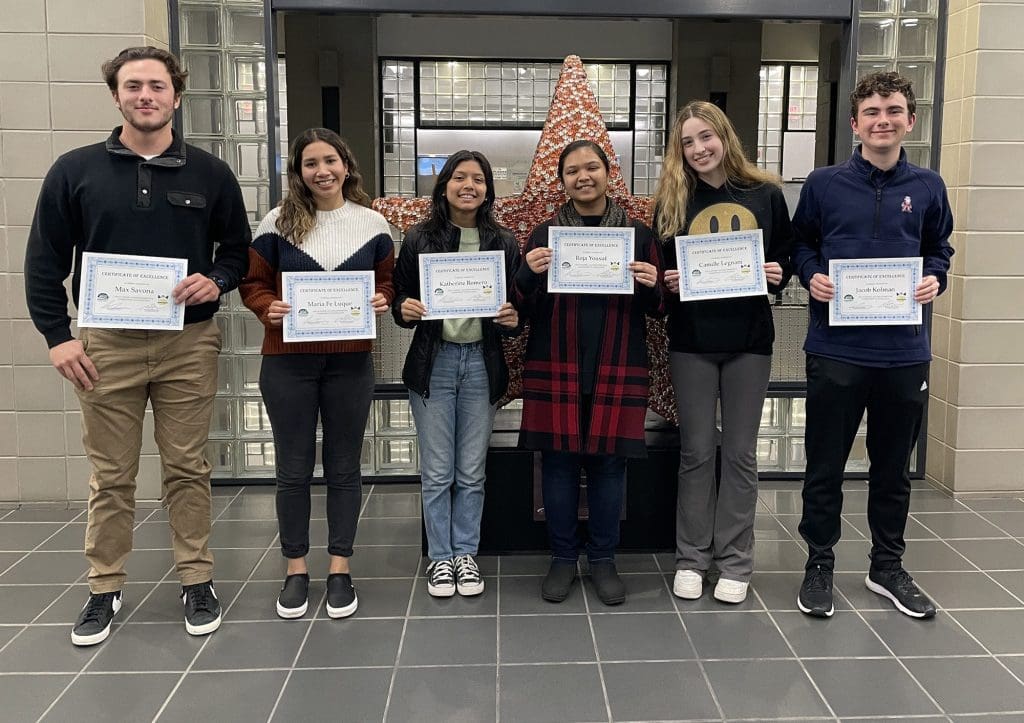 The Norwalk Board of Education is proud to recognize six high school seniors whose accomplishments have earned them admission to some of the most competitive universities in the country. Jacob Kolman, Camille Legnani, Maria Fe Luque, Katherine Romero, Max Savona and Roja Yousef have all actively engaged in the high-quality academic pathways and program choices available at Norwalk Public Schools, as well as the wide variety of extracurricular opportunities our schools offer. In addition to their own commitment to excellence, these outstanding students have cited the support of teachers, staff, families and friends in helping them accomplish their goals.

Last fall, Jacob Kolman was named a semifinalist in the prestigious National Merit Scholarship Program, an honor awarded to less than one percent of all high school seniors nationwide. With an aptitude for math and science, Jacob is self-driven to understand how things work, whether it be the 100-year-old math problem or exploring the forces that hold our universe together. As a junior, he joined the International Baccalaureate program at Brien McMahon and is a career-related Programme Diploma candidate. This program integrates IB classes with Project Lead the Way classes in the STEM (Science, Technology, Engineering, and Mathematics) field. Jacob is also a member of the musical technology department, co-captain of the math team, a leading member of the robotics team and a member of the BMHS golf team. Jacob was accepted early decision to Brown University.

Camille is a student in the International Baccalaureate diploma program at Brien McMahon High School. She plays volleyball at McMahon, is on the executive board of McMahon Students Support Equity in Education and has also interned for U.S. Rep. Jim Himes (D-Greenwich). Camille will attend the University of Pennsylvania this fall as a Benjamin Franklin scholar. A program that uses an interdisciplinary approach to address real world problems, the opportunity to enroll as a Benjamin Franklin scholar is an honor awarded to only the top 5% of incoming freshmen. Her goal after college is to attend law school, where she hopes to work on human rights and address the impact of legislation on immigration, voting rights and the LBGTQ+ community.

Maria Fe was born in Lima, Peru, and immigrated to the Norwalk in 2010, enrolling at NPS as a multilingual learner. She represented Norwalk High School in the district’s recent meeting with U.S. Secretary of Education Miguel Cardona, and at the Norwalk City Hall Equity Policy meeting last June. Maria Fe is co-president of AP Ambassadors, a club promoting the diversity of students within Advanced Placement and honors courses. In addition, she is president of the Kevin M. Eidt Chapter of the National Honor Society, as well as a volleyball player and peer tutor. Maria Fe plans to study American studies and religious studies. She will attend Harvard University on a full scholarship.

A first generation American whose parents were born in Peru, Katherine Romero’s dream of attending an Ivy League school started at a young age, when an older sister was accepted to Harvard. She is enrolled in the International Baccalaureate diploma program at McMahon. A member of the executive board for the Center for Youth Leadership, Katherine’s academic interests include how people identify themselves, whether it’s ethnicity, race, gender or sexuality, and how that is reflected in society. Outside of school, she volunteers at the non- profit Building on Community and started her own program called Connect for Kids, dedicated to empowering LatinX youth. Katherine received full scholarships to Harvard University, Brown University and Yale University, and was also admitted to Columbia University with a partial scholarship.

Max Savona is a high achieving student in the rigorous IB Diploma Program at Brien McMahon High School. He began achieving athletic success in rowing in the 8th grade. His academic excellence along with his athletic prowess resulted in his being recruited to Cornell University’s elite and competitive division 1 rowing team. He was accepted to Cornell on early decision and will be an economics major. Max recently started his own self-funded business called Bread 4 College, where he bakes and sells hand-made Spelt Flour Bread loaves to make money for college. Max contributes to the community as part of the Junior Rowayton Civic Association. He is also a member of the elite Honors Chambers Singers of Brien McMahon. Max plans to continue his passion for entrepreneurship following college and by owning his own business.

An executive board member of the Center for Youth Leadership and McMahon Students Support Equity in Education, Roja Yousuf is following the biomedical pathway in the McMahon International Baccalaureate career program. During a visit to family in Bangladesh, Roja realized that other countries lacked the access and understanding of modern medicine that she was accustomed to in the United States. That experience helped inspire her interest in healthcare. At McMahon, she is also a member of Health Occupations Students of America, or HOSA, a student led organization for future health professionals. She is currently training to be an emergency medical technician. Roja will attend Harvard University in the fall, with the eventual goal of enrolling in medical school to study emergency medicine.

The Norwalk Board or Education recognizes Roja, Max, Katherine, Maria, Camille and Jacob for their outstanding achievements. On behalf of the entire Norwalk community, we wish them all the best in their future studies.

Wow. This is really impressive. Congratulations to all of these kids. Your parents seem to have done a great job. Good luck!

Congratulations to the scholars!