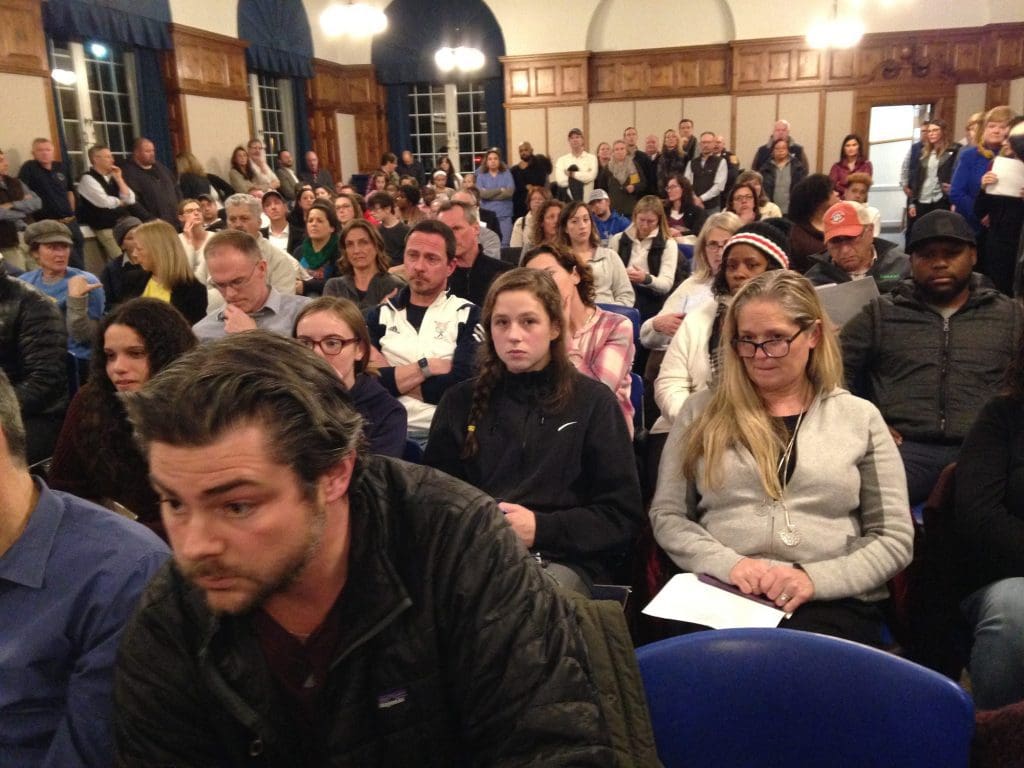 NORWALK, Conn. – It was Wednesday in City Hall, and what looked like the line at the DMV was actually a lengthy queue of Norwalk coaches, parents, and young athletes waiting their turn to advocate for better sports facilities.

Former Planning Commissioner Dave Davidson kicked off the dialogue, contending that Recreation and Parks’ needs “for the last several years have been sacrificed to fund the Board of Education programs, which have exploded from the time they were originally proposed and approved.  You have to recognize infrastructure and recreation and parks’ needs with the same support that you’ve given to the Board of Ed in the past.”

One after another, concerned residents expressed dismay with fractured tennis courts, flooded playing fields, and numerous other chronic causes of cancelled games and inability to host tournaments.

The Planning Commission public hearing on the 20-21 capital budget marks an early stage of a process that will culminate with a Common Council vote in April.

Chief Financial Officer Henry Dachowitz’ 2020-21 recommendation allots $225,000 for basketball and tennis courts ($575,000 had been requested).  Recommendations granting full requested amounts include $85,000 for athletic fields, $50,000 for backstops and fencing, and $900,000 for the West Rocks soccer complex.

Denial of a $1 million turf softball request was met with dismay by speakers who said that abysmal softball field conditions have yielded a 35 percent game cancellation rate.  On a darker note, several people declared that the marked disparity between boys’ baseball and girls’ softball facilities violates Title IX, a federal law which states, “No person in the United States shall, on the basis of sex, be excluded from participation in, be denied the benefits of, or be subjected to discrimination under any education program or activity receiving Federal financial assistance.”

Crusading activist Diane Lauricella stepped to the podium to warn that repeated skin contact with artificial turf may cause cancer, due to carcinogens in the rubber crumbs layered into the product.  Noting artificial turf’s universal omnipresence, Rec and Parks Director Nick Roberts replied, “There’s some data on both sides of it, and we can ask our department to get their input as well.”

$225 million requested for NHS… by whom?

Noticing a newly-entered capital budget insertion of $225 million for Norwalk High School listed as a Board of Education request recommended by Chief Financial Officer Dachowitz, Planning Commissioner Nora King spoke up.  “This line item was not in our meeting on Tuesday and Wednesday last week,” she said.  “There was no dollar amount there, so I think that we should get some backup material.”

Commission Chairwoman Fran DiMeglio added “It wasn’t there from the Board of Ed.  It was there from the Director’s recommendation,” prompting a reply from Norwalk Public Schools Chief Financial Officer Tom Hamilton.

“I just saw the finance director’s recommendations today,” said Hamilton. “I haven’t had a chance to speak with him concerning those recommendations.  The sheet that I saw is showing a new project in it for Norwalk High School that actually lists as a department request, and that is not an accurate presentation because our Board did not make such a request, so I think it needs to at least be modified to show that the Board of Education has not made that request.”

Hamilton, former Norwalk Finance Director, explained, “My understanding of the City Charter is that the Mayor does in fact have the authority under the Charter to add new projects to the capital budget, and I was under the impression that if there was going to be a new project added for Norwalk High School, it would come at the time that the Mayor considers the capital budget, which is in March.  The Charter then does go on to say that if the Mayor adds any new projects, it is required to come back to the Planning Commission for a recommendation on any such project that’s added.  But I’m not aware that the Charter provides for the Finance Director to add projects.”

Does anyone else get the feeling that Norwalk High School project will end up being an unmitigated disaster. My Grandmother from Ireland used to say: If something smells like a fish, IT’S FISHY!… I think that describes current situation quite well.

Come on NoN readers – you know the answer to the header question: $225 million requested for NHS… by whom? Waldo is hiding behind his minions.

Now clearly our new CFO Dachowitz is going to have to humiliate himself and take the bullet – be prepared for the explanation that “I’m new to the process” and/or “it was a simple clerical mistake” – for the obvious attempt to shoehorn a 225 million capital budget item that – according to the CFO of the NPS BOE Thomas Hamilton corrected – “our Board did not make such a request”. This 1-party gang can’t get their story straight.

I’ve seen this same NoN article posted to Facebook – with the ask defined by Barbara Meyer-Mitchell as “a hypothetical”. I’ve seen the same BOE finance chair say – IF this doesn’t happen – we’ll just re-allocate the spending. What? Simone Biles can’t contort her positions to that degree. It’s truly sad when BOE members who by definition should represent the entire city become Gunga-Din for an audience of one.

Norwalk parents, taxpayers – lovers of parks & recreation – your needs, wants, and demands are all easily dismissed in lieu of a single line item for a “Bob Duff” NHS project. 225 million – everything else is dwarfed by comparison. Under inspection – this promise (“WILL be funded”) appears to be uncertain, to date unfunded, and to date – not on the state priority list. I dare say – this appears to be a concocted “shiny” object to distract the electorate from a total failure to support Norwalk with needed state funding to address the ELL population crisis, and to advance an “economic-desegregation” dream that none of our “leafy” neighbors show even an ounce of buy-in. It’s NOT happening. Norwalk – you deserve better.

Leave it to Norwalk Recreation and Parks to mess up things.
They are actually considering moving into Rowayton School this summer and taking over beloved Mr. Liberatore’s camp.
It will never work here! We will not allow them to mess up a good thing!

I am also very curious about the city summer camps this year. It is difficult to find clear information about the new Park and Rec/PF Camp merger. I know it is only February but summer is just around the corner and it is time to start planning summer activities for our children. I am uncertain what is available, my understanding is that a shift in management has caused confusion on many fronts. There used to be points of contact in our schools who had all the answers for Norwalk’s summer programs. Now these points of contact are dead ends, unaware of the plans that Parks and Rec has in the pipeline. The Board of Ed run camps were all very unique to Play and Learn. The summer program variety made it easy to plan summers and healthy activities for our children. My hope is that the new Park and Rec office will be ambitious about this merger and consult the people who made these programs special. Based on this article, it seems as though there is a lot going on at City Hall right now. Maybe when the dust settles everything will turn out to be fine and the same professionals will back to run amazing summer programs.

Parks and Rec is making a mockery of the NPS sports and gym games camp.
They didn’t even consult the gym teachers who work at these schools, who know our kids. Completely blindsided.
I’m also hearing they are not willing to pay these teachers their market-rate teacher contract. Instead, the few who were contacted were offered MUCH less.
Last night at a school event a big topic of conversation was how Play and Learn is trying to move onto our turf. We are going to do everything possible; we’ll get hundreds of signatures if needed, to support our beloved gym teacher and keep giving kids the camp our kids and us parents know and love.
Your camp will FAIL at Rowayton. Big time fail.

Someone with Norwalk Public Schools has to be a part of this game to clear out all NPS spots and gym games camps. It is a serious problem, as these have become an essential part of the local communities summer choices for kids… not only the kids who go to the camps, but also to the older set of kids who volunteer and work at the camps. Many of these are the kids who don’t qualify to go to summer academy… apparently the only summer program that NPS is willing to be involved in.They want to farm everything out to other vendors… Parks and Recs; they did the same transition for after school enrichment… shifting the programs to be under the Carver School program instead of under NPS. Was the BOE consulted in these changes? Certainly parents were note. It came out of nowhere. I can only speak for myself and the parents that I know… but the Parks and Recs programs are not offering the same service that we had before… and I agree with the other commenters it is not going to work for the majority here in Rowayton. Why all these changes without consulting the people it affects? The kids are eager to be counselors and campers, the parents are eager to pay for the program, the gym teachers and the baseball coaches who have always run the program are eager to continue the program. So how can the program be no more? Unacceptable. Parents haven’t just been writing out checks for the summer sports & gym camp, we are also tax payers who have helped pay for the schools, the teachers, the programs; we are also the people who have donated our money and our time and energy to advocate for gyms, athletic equipment and fields. This is really untenable.

My kids have attended the Mcmahon Baseball Camp for years and have learned a lot. It is a shame that parks and rec does not want the people who have run these camps to be involved any longer.