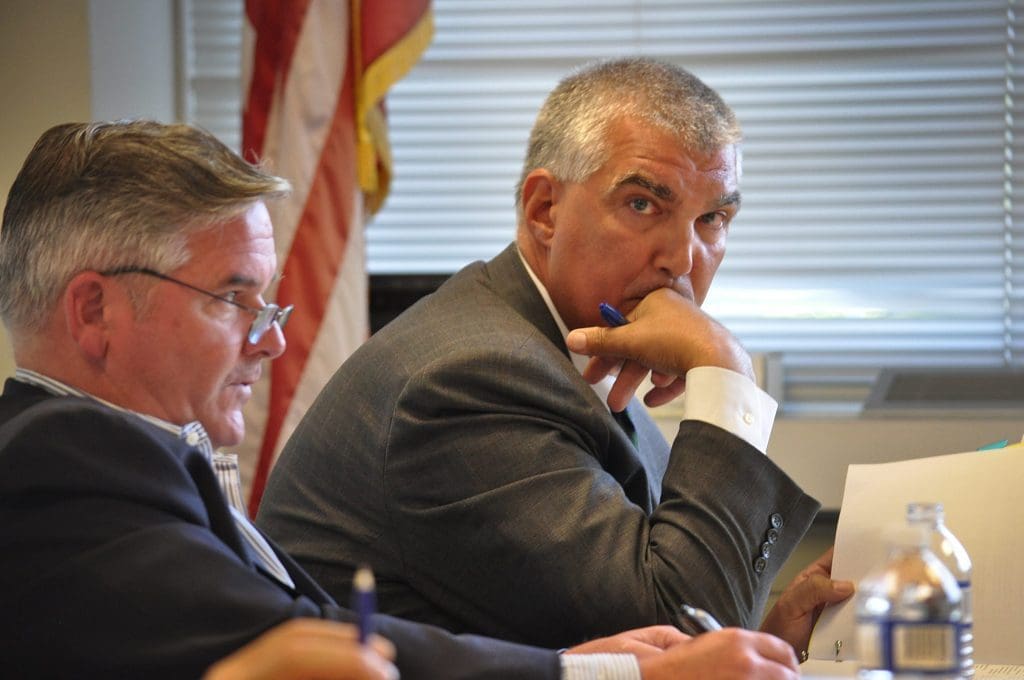 NORWALK, Conn. — The City of Norwalk has forced the Norwalk Redevelopment Agency to hire outside counsel in the lawsuit filed against POKO (ILSR) and developer Jason Milligan.

“I said that when the Agency has even just the appearance of conflict they needed to maintain the highest ethical standards because they can only be successful in their efforts at redevelopment through public trust, because they are giving away city assets or giving away tax incentives,” Westmoreland explained in a late night phone call.

The properties are governed by a Land Disposition Agreement because the city turned over ownership of public parking lots to POKO to facilitate the construction of Wall Street Place. The construction halted two years ago and some of the land now owned by Milligan’s LLC is integral to restarting the project, the City has said.

The LDA specified that POKO needed Redevelopment Agency approval before transferring the property.

Milligan last week announced that Komi Ventures, an LLC he manages, has filed a deed-in-lieu transfer on the properties owned by Wall Street Opportunity Fund.  Komi acquired the debt POKO owed on the properties, making Komi a lender.  Transferring the property to a lender is permitted under the LDA, and negates the City and Redevelopment Agency’s lawsuit, Milligan said.

Asked Friday about Grenier’s involvement, Milligan replied in an e-mail: “Marc is not involved. Not sure what website that is.”

“Ok,” Milligan replied in a subsequent email. “It is no secret that Marc has been my attorney in past matters. Unfortunately, he is not my attorney currently because he is a good attorney.”

Milligan wrote that information on file with Connecticut’s Secretary of State was up to date.  He did not reply to a late-night email Tuesday asking for details regarding the legal matters in which Grenier has represented him.

Grenier has not replied to two emails from NancyOnNorwalk requesting comment, one sent Friday and one sent Tuesday.

The Redevelopment Agency met Tuesday with an agenda item that called for an executive session to discuss pending litigation and possible action related to the retention of litigation counsel in the lawsuit filed against ILSR. The executive session went on for more than an hour and a half, overlapping the Common Council meeting that began two hours after Redevelopment began.

When Chairman Felix Serrano resumed the public portion of the meeting, he called for an immediate vote on a resolution to hire Russo and Rizio LLC, a legal firm based in Southport.  Westmoreland said he requested to offer commentary on the resolution.

Discussion of the resolution lasted only two or three minutes.

“I said that I was very concerned about the process for the new lawyers because only one option was presented to us, that I was concerned that the city had to force the issue of hiring outside counsel. The Redevelopment Agency did not review their choice of outside counsel with the city before it was presented to us for voting on,” Westmoreland said.

Assistant to the Mayor Laoise King, who attended the Redevelopment Agency meeting, said in a late-night email that NancyOnNorwalk would receive a response to these comments Wednesday.

Serrano did not reply to a late-night email asking when and how the Agency became aware of Grenier’s legal work for Milligan.

While the Redevelopment Agency is “quasi-independent, it has no reason to exist other than the city of Norwalk and for the benefit of taxpayers,” Westmoreland said. “The city and the Agency need to work in lockstep, especially on this disaster project, POKO.”

A spot on the Agency was recently vacated, Mayor Harry Rilling said two weeks ago, explaining in a statement that, “With so much happening with Wall Street, I felt it was essential to move forward, so the RDA had its full complement of commissioners.”

Sad stores , gyms and people are getting out all over the city , this sends a clear message to anyone thinking they would stay to see it all get turned around.

A new mall to service the casino , like anyone is going to drive and pay tolls to get to Norwalk.

Where was Quintard ave’s legal team?

Harry is stacking the cards its the only hand he has left.

Nancy, keep at it!! The RDA is a questionable entity with, heretofore, little to no oversight or accountability. Sheehan and Grenier do what they want. Grenier has been involved in a number of property transactions with potential conflicts of interest yet none of this is questioned. This good ol’ boys club need to be exposed. Hopefully NON and David Westmoreland will make this this happens.

I would not hire Russo and Rizio LLC to manage a kids baseball game. Go to the CT courts website and search in Stamford using the terms Rob Russo and Thomas Thornton.

I am always available for comment. You didn’t give me much yime to respond. I happened to be on an airplane when you tried to contact me.

Marc Grenier is an excellent attorney and RDA is fortunate to have him.

Nancy, Please double check your reporting. The website you sited lists Marc as Agent not managing member. He is neither which I have told you. The secretary of state website has the only up to date and accurate information.

While the city deflects blame and provides distractions the tax payers are left with giant unanswered questions!!

What is the plan to fix the Tyvek Temple?
I have a plan that the people of Norwalk love. It gives all the public parking that was promised and doesn’t require more taxpayer money!!

What is the goal of the expensive and time consuming lawsuit?
No goal stated, but it makes it seem like the city is doing something.
This is the weakest lawsuit I have ever seen by this city. It should be thrown out and the city should be reprimanded for wasting the court’s time.

Jason Milligan’s statement Friday that “Marc {Grenier} is not involved” was included in the original story.

This all seems a little overblown. In a relatively small legal community such as we have in Connecticut, conflicts are inevitable. The standard remedy is for the conflicted firm either to obtain waivers from all involved parties or to step down from the particular matter in which there is a conflict. Given the sensitivity of this matter it appears that Attorney Grenier and his firm decide not to seek waivers and instead stepped a sided from this matter for the Agency. That is something that happens routinely to the commercial firms practicing in Fairfield county.

This business of Marc Grenier being affiliated with Milligan really needs to be investigated and explained. Is this yet another Redevelopment Agency conflict of interest? ….or worse?

Investigated and EXPLAINED! This relationship needs to be explained to the public. What is going on in yet another Redevelopment Agency executive session?

Is this another egregious screw up by the Redevelopment Agency where no one is going to be held accountable? How long must we put up with this?

As to successor counsel, Not sure why the City would need to be consulted as the Agency is independent and has its own lawyers. The Agency never uses City attorneys for its representation. As to attorney Russo, from my own experience he is a respected and highly competent attorney. If the Agency asks him to cooperate with and coordinate with the City I am sure he will, just as attorney Grenier has done for years. The issue should be fixing this development not squabbling about who is counsel for Redevelopment.

PNolin: when it comes to the Redevelopment Agency we need impeccable integrity given how they have violated the public trust and utterly failed at almost all their endeavors

The problem with the ReDevelopment Agency is that it’s like an undercover Black Ops Agency – confusing and conflicting with P&Z and nobody knows where the money comes from. If it is independent agency, does it do the bidding of the mayor? If it relies solely on outside state and federal money for its planned projects, Nancy could you determine if it is grant money or taxpayer money funding what appears to be a petulant and vindictive lawsuit that it being fueled by the mayor’s office?

Why do we need Redevelopment – why can’t the staff be incorporated into P&Z? Surely, there is enough work for everybody and then maybe Norwalk wouldn’t always be in conflict with itself.

“I said that when the Agency has even just the appearance of conflict they needed to maintain the highest ethical standards because they can only be successful in their efforts at redevelopment through public trust, because they are giving away city assets or giving away tax incentives,” Westmoreland explained”

“The Redevelopment Agency met Tuesday with an agenda item that called for an executive session to discuss pending litigation and possible action related to the retention of litigation counsel in the lawsuit filed against ILSR. The executive session went on for more than an hour and a half, overlapping the Common Council meeting that began two hours after Redevelopment began”

“The Redevelopment Agency did not review their choice of outside counsel with the city before it was presented to us for voting on,” Westmoreland said.

“While the Redevelopment Agency is “quasi-independent, it has no reason to exist other than the city of Norwalk and for the benefit of taxpayers,” Westmoreland said. “The city and the Agency need to work in lockstep, especially on this disaster project, POKO.”

To sum this up – the RDA – which is acknowledged as “quasi-independent” (what part exactly?) – gives away – repeat – gives away – Norwalk assets and tax incentives. Like our mayor – they prefer “executive sessions” over public scrutiny. They didn’t ask anyone about their decisions for outside counsel.

Mr. Westmoreland – who receives platitudes for his integrity and contributions to Norwalk – at least says what we all know to be true. What is missing is this: there is no accountability. The other plain truth – the RDA is the vehicle by which the mayor seems to repay campaign supporters. One wonders if Mr. Westmorland keeps his integrity while associated with this Norwalk swamp creature.

…if it’s a coincidence that John Ryan former State representative and Norwalk Corporation Counsel and Republican operative is a partner in the firm Redevelopment apparently tapped to address conflict of interest with partner in firm led by another Republican leader?