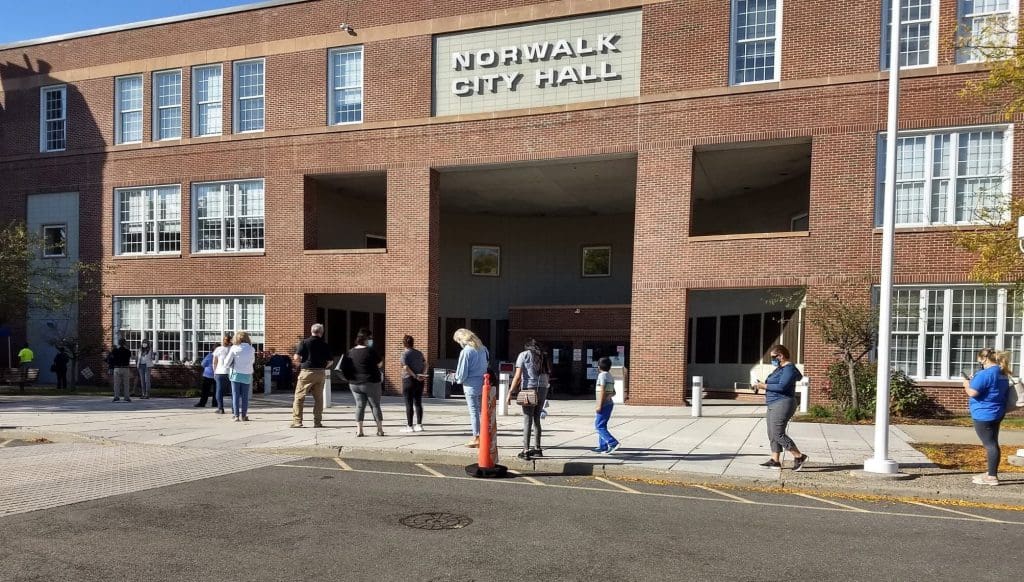 Norwalk taxpayers line up Wednesday outside City Hall, waiting their chance to reach tax collectors at a walk up window. (Courtesy photo)

The City granted an extended grace period due to COVID-19, allowing most Norwalk taxpayers an additional 60 days to make their July 2020 tax payment. Payments received or postmarked Oct. 2 and later will incur interest at the rate of 6 percent, Tax Collector Lisa Biagiarelli said. That’s “one and one half percent per month for four months, as interest reverts back to July 1 per state law.”

Bryan Meek: that’s not correct. Taxes are due July 1. Usually, taxpayers have a grace period until August 1 to pay without penalty. This year, the grace period was extended until October 1, in accordance with an executive order issued by the State of Connecticut, and acted upon by our Mayor and Common Council. The due date did not change; the last day to pay was extended.

Interest on back taxes is charged at 1.5% per month from the due date, in accordance with state law. A portion of a month is considered a month. So, interest is charged for July, August, September, and October – 4 months. 1.5% x 4 months = 6%. In prior years, payments made on August 2 incurred 3% interest – 1.5% per month from the July 1 due date, with a portion of a month being the equivalent of a full month. In prior years, if you waited until October to pay, you’d pay 6% interest. Nothing has changed, except the length of the grace period. I hope this is helpful.

Yes, that clears it up for me. Thanks and good luck. I’m forecasting a 8% uncollectible rate which is going to be devastating.

And thanks for not taking the package. This bloodbath is bad enough. Glad to have you to kick around for a while longer. This isn’t going to be easy, I’m sure.