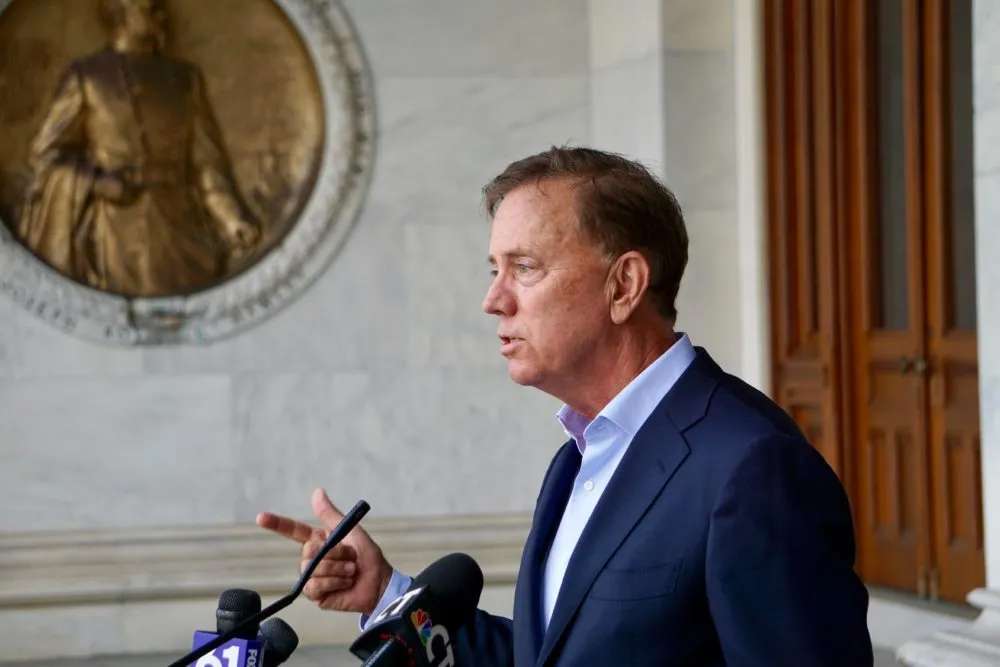 Gov. Ned Lamont at a press conference outside the Capitol in October 2020. (Mark Pazniokas, CTMirror.org)

Connecticut still faces a huge pile of debt, but over the past year alone, it’s wiped out more than $7 billion out of a $95 billion problem — a 7.4% drop — and more debt is expected to come off the books soon.

And that report doesn’t take into account a $3 billion supplemental payment made earlier this fall against debt in the state employee pension system. The next actuarial valuation, which will include that payment, is due in December.

“Gov. Lamont has placed Connecticut in a strong position to continue to pay down legacy debt, while preventing tax hikes and significant spending cuts in the event of an economic downturn,” said Office of Policy and Management Secretary Jeffrey Beckham, the governor’s budget director.

While the $2.85 billion surplus OPM forecasts for the current fiscal year — potentially the second-largest in state history — could accelerate debt reduction even further next fall, Beckham tempered his optimism with caution.

“There are global signals of economic softening beginning to take place,” he added. “We will continue to maintain our current fiscally responsible spending and conservative revenue estimates as we closely monitor the impact of changes in the economy.”

Connecticut made strides in its latest report shaving down all major areas of debt.

Unfunded pension obligations, the single-largest area at $39.5 billion, were down $1.3 billion or 3% from last year’s Fiscal Accountability Report.

And while more than 4,400 state employee retirements between January and June — double the amount seen in a typical year — will try to push pension debt upward, Beckham said he’s optimistic that trend won’t be enough to fully reverse the $3 billion supplemental payment made into the state employees’ pension fund this fall.

In other words, debt in this area will drop again when the December valuation comes out. It just remains to be seen by how much.

Governors and legislators routinely failed to save adequately for pensions pledged to state employees and to municipal teachers between 1939 and 2010. And by failing to save adequately, the state also forfeited billions of dollars in potential investment earnings over that period.The General Assembly tried to reverse that trend when it enacted a budget with strong bipartisan support in late October 2017. Lawmakers specifically capped the state’s ability to spend state income tax receipts tied to investment earnings — one of its most volatile revenue streams.

This new program, coupled with a stock market that boomed between 2018 and 2021, not only helped to create a record-setting, $3.3 billion rainy day fund, but it also left another $5.8 billion in surpluses that became supplemental deposits into the pension fund.

Sen. John Fonfara, D-Hartford, co-chair of the tax-writing Finance Committee and a leading architect of the 2017 savings initiative, said he thanked Lamont and lawmakers from both parties for embracing a program that “is leading to a change in culture in the [Capitol] building.”

While health care, education, economic development and other core programs remain essential elements of the budget, Fonfara added, officials have taken every opportunity to attack debt without jeopardizing these other priorities.

But legislators are still struggling to find just the right balance between paying down debt and using the surplus to address other pressing needs.

“We need to continue that pattern” of debt reduction “and make sure we don’t forget why we do it,” said Rep. Toni E. Walker, D-New Haven, co-chairwoman of the Appropriations Committee.

Lawmakers focused on reducing debt because it was gradually consuming too much of the annual budget, leeching resources from everything else, Walker said. But the coronavirus pandemic and a slumping economy have left challenges that still need to be addressed in health care, higher education and other programs, she said, adding these also have to be balanced against the chance to accelerate debt reduction even further.

But House Minority Leader Vincent J. Candelora, R-North Branford, is worried that shrinking debt could prompt some legislators to get too lax when it comes to spending.

For example, while pension debt has gone down considerably over the past year, the same is not true of bonded debt, which has been a concern of Lamont’s since he first took office in January 2019 and challenged legislators to embrace a “debt diet.”

Overall bonded debt stood at $27 billion in the new report, down slightly from $27.2 billion one year ago.

As pension debt goes down, so does the temptation to put more bonded projects on the state’s credit card.

“We have to be careful about how we’re spending the savings,” Candelora said, adding that Republicans are open to further tightening savings programs to ensure overall debt levels keep shrinking.

Debt in retirement health care dropped the most

Connecticut also carries huge unfunded liabilities, about $19.5 billion, in its health care program for retired state workers. But that’s where state officials have made the most progress recently at lowering debt.

Unfunded obligations in this program are down $4 billion or 17% from last year’s report. The bulk of that improvement comes from savings state Comptroller Natalie Braswell negotiated with Connecticut’s Medicare Advantage plan vendor.

The state never had reserved anything to fund this retirement health program until 2007 — choosing instead to find hundreds of millions of dollars annually in its budget to pay for the benefits. And it wasn’t until a 2009 concessions deal was reached with unions that workers began contributing a portion of their pay toward retirement health care.

In 2021, all four agencies upgraded the state’s ratings.

And the governor said the higher ratings mean more than just an increased opportunity to borrow funds at lower interest rates.

“It is a signal to the businesses and residents that our state is on the right financial path, that we have shown a commitment to putting our fiscal house in order, and we are continuing to make significant progress to address our pension and other post-employment benefit liabilities,” he added. “S&P recognizes the progress that has been made and that Connecticut is getting its mojo back.”

Tyrannical COVID lockdown policies while MAYBE good intentioned at first ended up having a massive social and financial cost, we arent going to talk about that?

Just keep voting Blue until we become the so progressive and destitute Portland Oregon where homeless and druggies lumber around every local park. Or how about the very progressive and wonderful place that is NYC where you get assaulted trying to take the train to work?

The pensions are still funded less than 60 cents on the dollar.

No mention of the $44 billion in covid 19 relief that landed on CT and how much of that went to cook the books here?