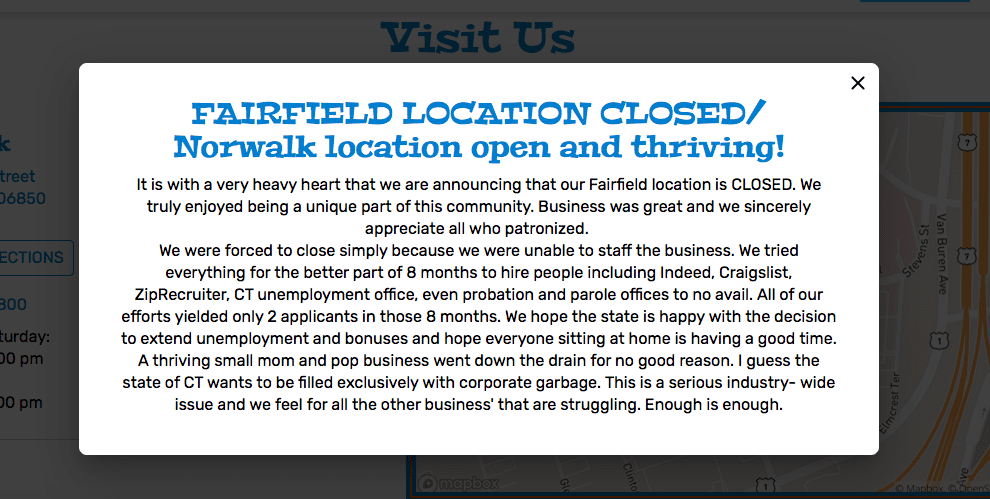 After eight months of trying to hire staff, the owner of the small sandwich and burger joint Blue Cactus Grill closed his location in Fairfield with a message for Connecticut lawmakers:

“We hope the state is happy with the decision to extend unemployment and bonuses and hope everyone sitting at home is having a good time. A thriving small mom and pop business went down the drain for no good reason. I guess the state of CT wants to be filled exclusively with corporate garbage. This is a serious industry-wide issue and we feel for all the other businesses that are struggling. Enough is enough.”

The message, which has since been changed, was posted on the restaurant’s webpage announcing the closure of their Fairfield location, which had been in operation since 2019. Blue Cactus Grill continues to maintain its original Norwalk location, although owner Vic Amereno says he’s struggling to hire enough staff at that location as well.

Amereno said the decision to close his Fairfield location was difficult. The restaurant is small, more suited for takeout than dining in and therefore did fairly well during the pandemic as to-go orders surged.

However, when the state moved to fully reopen, he couldn’t get enough people to work and manage the shop, which is small and typically employs 8-10 workers.

“I just feel that when the extended unemployment benefits started there were no applicants whatsoever,” Amereno said. “We were operating with very substandard help for a long time and little by little we just couldn’t support the business. I tried everything; we pay our employees well, we give benefits. We’re a little mom and pop, thousand square foot place.”

“We started offering all kinds of incentives – bonuses to be hired, paid time off, paid vacation, birthday gifts, overtime, Sunday extra pay, but just couldn’t get anybody in the door,” Amereno said.

“I lost my shirt on the Fairfield place, I lost my whole investment,” Amereno said.

While Gov. Ned Lamont moved to reinstitute the work search requirement for unemployment recipients and even offered a $1,000 sign on bonus, courtesy of federal COVID-relief dollars, the governor has also maintained the extra $300 per week in federal unemployment assistance, a move that some state lawmakers and businesses say is hurting Connecticut’s job recovery.

The federal unemployment benefit is set to expire in September, but 25 states have already ended the extended benefits early.

As of June, there are roughly 136,000 Connecticut residents receiving unemployment benefits, according to the Connecticut Department of Labor. Connecticut’s unemployment rate was 7.7 percent in May, almost 2 percentage points higher than the United States average.

Connecticut’s Leisure and Hospitality sector of the economy, which includes restaurants and entertainment venues, was still down more than 30,000 jobs since February of 2020, according to CT DOL.

Amereno says he’s already received emails and messages from “keyboard warriors” telling him to pay his staff more but is already paying over $15 per hour and with prices for restaurant goods rising dramatically there’s little room to do much more.

Furthermore, he’s being outbid for employees by larger restaurant companies and chains, as the employment crunch drives labor prices higher making it more difficult for a small operation like his to compete.

“There are a lot of companies offering exorbitant amounts of money to people, so then some of my people who we were paying seventeen, eighteen bucks per hour left me with no notice,” Amereno said. “So, we went from open on a Wednesday – already operating with a skeleton crew, already maxing everyone’s hours out – to closed by Friday. We were down to four people.”

Blue Cactus Grill is not the only restaurant with this problem. Several reports in Connecticut and across the country detail similar hiring difficulties following the pandemic shutdown of the restaurant industry.

According to a July 2021 analysis by the National Restaurant Association, restaurants had a record-breaking 1.2 million job openings and staffing remained 10 percent below pre-pandemic staffing levels.

Another analysis published in May found that 72 percent of restaurant owners said hiring and maintaining staff was their biggest challenge, another all-time high for the industry.

The analysis also said that it was mostly adults, not teenagers, who were not returning to the restaurant workforce. The lack of labor was particularly pronounced in the age group of 55 and older — an age group more susceptible to COVID.

Explanations for why restaurants are facing hiring difficulties range from the extended unemployment benefits to worker pay to treatment of employees by owners and managers and fear of getting sick, but the issue remains the same: fewer people are returning to service industry jobs for now.

One Connecticut restaurant owner who asked not to be named said that while he thinks the enhanced unemployment benefits may play a factor, there are several other concerns for restaurant workers, including daycare costs, fears of being laid off again if there’s a resurgence of the COVID virus and reduced earning potential, particularly at the start of reopening when restaurants were forced to close early.

“I don’t think it’s just because of unemployment. We have few people we want to bring back, but their issue is daycare, they can’t find daycare where it makes any sense for them to come back to work,” he said. “When they factor it out, they can’t afford to go back to work.”

He also said workers were traumatized by the shutdowns, when they were given only a day or two notice that they would be out of work for the foreseeable future and unemployment payments were significantly delayed as the Department of Labor was inundated with an unprecedented number of unemployment claims.

“Most restaurant people are week to week,” he said. “So, they get laid off with one day’s notice and then they apply for unemployment and unemployment is so screwed up they don’t get a check for four, five or six weeks.”

“So, for four or five weeks you have no income and no place to go. So, it was really, really devastating for these employees. We still have employees who, when they talk about it, they cry. They went home with no jobs and no money,” he said.

With competition over workers is driving wages higher — in addition to Connecticut’s minimum wage, which is set in increase to $13 per hour in August – restaurants are also having to deal with surging wholesale food costs.

According to the U.S. Bureau of Labor Statistics, the price of chicken has risen to record high levels, but the price increases aren’t limited to just poultry: everything is rising.

“Everything has literally tripled or quadrupled over the last several months,” Amereno said.

“It’s insane,” the other restaurant owner said. “What’s happening is everything across the board is more expensive and most of that we think is because the cost of energy has doubled — gas, diesel, delivery charges are higher. Just about everything is more expensive, that’s for sure.”

The long-term economic, financial and psychological effects of the COVID shutdown are still being felt in a variety of ways and likely will be for some time. Teleworking, home offices, inflation, unemployment and rising labor costs may all continue to affect businesses, families and individuals for some time.

The federal unemployment payments, however, have a timeline and it will run out in September. Until then, Amereno says he’ll keep working his Norwalk location and keep looking to hire new people who want to work.

“I know people who are not working, who haven’t been working since COVID, who tell me ‘why would I go back to work? I’m getting paid my unemployment, plus another $300 per week, I’m waiting till this thing ends then I’ll go back to work,’” Amereno said.

All small businesses are hiring and people are refusing to go back to work. Everyone who is collecting is just sending out resumes to keep collecting. It has been frustrating.

Would it help businesses to continue to survive, grow,
and be profitable by attracting help
from current unemployed workers collecting their benefits,
by offering to pay and hire them with
something competitively close to their benefits or more,
in order for these workers to consider going back
to work again?
As we all know, like anything else in our economy,
selling prices are usually dictated my market
supply and demand conditions,
and it is the same with a shortage
of finding workers now.

Interesting. I would tend to agree that the issue has to do more with COVID exposure. That thought came to mind as I stood in line to pay my taxes at city hall and the mask-less person in front of me was coughing and sneezing. I’m vaccinated and was still wearing a mask but couldn’t wait to get home and shower! How does someone working several hours for a dinner shift deal with inconsiderate and possibly COVID infected people? Starting to agree with businesses placing vaccination requirements.

Here is an idea, make the freeloaders get the vax and make them go back to work. Jobs aplenty and I’m tired of hearing “I’m afraid to work because of COVID!” Get the vax, get to work! End the eviction moratorium and extra unemployment benefits, people will be back to work real quick….Who am I kidding, this is Connecticut the libs will just continue to take care of the lazy.

The good thing about all this is it proves socialism does NOT work. Many will NOT work if they don’t have to.
Disgrace…If Norwalkers don’t change their voting pattern we are screwed…
#WakeUpAndWin

To make a long story short , without many government interventions many restaurants would have survived COVID 19.

Then there are all these spots opening, contradicting that assumption