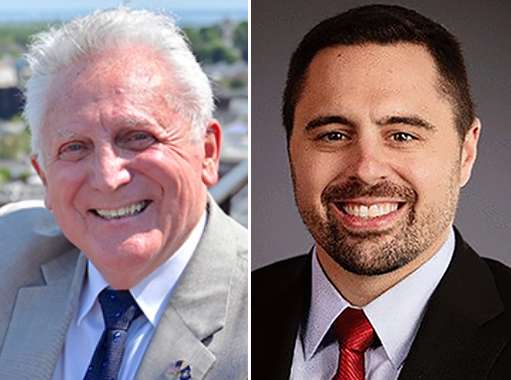 At left, Democratic Mayor Harry Rilling, as shown in a campaign photo; at left, Republican Mayoral hopeful Jonathan Riddle, as shown on his LinkedIn page.

NORWALK, Conn. — Democratic Mayor Harry Rilling has collected about $135,000 in his drive for reelection. On Tuesday, a potential Republican opponent came forward: former U.S. Rep. candidate Jonathon Riddle. And John Kydes has collected another $550 in his bid to be a Mayoral candidate in 2023. (Yes, in two years.)

Meanwhile, Lisa Brinton’s Independents for Norwalk PAC has raised about $14,000. It’s rumored she has 15 people interested in running for various Norwalk offices under the independents banner this year, but they would need to petition their way onto the ballot.

Riddle, a South Norwalk resident, has been Chief Executive Officer for Deep Value Investments since February, according to his LinkedIn page. He’s also Chief Executive Officer and President of Empowered Learning Corporation, since December, and was director of Altium Wealth from January to November 2020. He was Vice President and lead advisor for the Private Bank of Bank of America in Westport for two years and four months, ending in December 2019.

Riddle grew up in Westchester County, New York, and was a three-sport athlete at Archbishop Stepinac High School, going on to play Division 1 football at Iona College in New Rochelle, his website stated in 2019. He originally intended to run for Common Council that year, and was endorsed by the Republican Town Committee, but he instead challenged U.S. Rep. Jim Himes (D-Greenwich) in 2020.

Riddle did not reply to a Tuesday evening email from NancyOnNorwalk.

“There is a lot of excitement around his candidacy. However we will not know the final results until the convention,” Wilms said.

Norwalk Republicans meet next Tuesday, in person at the Norwalk Inn, to endorse candidates.

Friends of Rilling had $114,491.18 left in its warchest as of July 1. A news release said the $48,000 raised during this reporting period came from 174 individuals, with approximately $9 out of every $10 contributed coming from individuals and residents of Norwalk. Overall, there are 400 contributions from individuals.

“I am humbled by the outpouring of support we have received, and will continue to work with diligence and determination to earn it,” Rilling said in a statement. “I am grateful to each of our contributors, our campaign team, and our incredible volunteers. I am equally thankful for the continued support of working families and labor unions like the Fairfield County Building Trades, carpenters, plumbers and pipefitters, electricians, roofers, bricklayers, laborers, telecommunications workers and firefighters. I am proud of our city, our residents, our businesses, and our city employees. While we are still emerging from the pandemic, I have never been more optimistic for our future. I will continue to work hard to earn the votes and support of the people of Norwalk.”

Adam Wood, campaign spokesman, said, “We are encouraged and motivated by the enthusiasm and support Mayor Rilling continues to receive from the people of Norwalk. Voters have appreciated his steadfast leadership throughout the pandemic, and make it clear that they want that kind of tried and true experience to help Norwalk prosper in the future.”

He’s also seeking reelection to the Council, where he has represented District C for nearly eight years, been Council President for two years and served as Planning Committee Chairman since November 2015.

Kydes for Mayor raised $15,412 in the first quarter. The maximum donation for an exploratory committee is $375. Kydes received 19 maximum donations, seven of them from out-of-towners.

Brinton, an unaffiliated voter who has twice tried to take down Rilling, formed Independents for Norwalk as a Political Action Committee in June, according to Town Clerk Rick McQuaid.

She has filed papers to run for Council at large this time around. Multiple sources say she’s filed paperwork for 15 candidates, but she and McQuaid say that’s not accurate. Brinton explained:

“We have a petitioning process to follow that is different from the other two established local parties. While the Independent Party exists on a state level and has a rich history in Norwalk, it lapsed a couple of decades ago. We are reinvigorating the line, the party and its local platform, with candidates from all political backgrounds.

“Once we go through this municipal election cycle, we can create a local organization and won’t  have to complete this complicated, rules based petitioning process for future elections.  We’ll be able to nominate and endorse candidates just like the other two parties.   As a truly big tent party, Independents For Norwalk welcome anyone interested in advocating for the interests, long term quality of life and economic well being of our city and its residents versus the cronyism and special interests politics we are witnessing in our city today.

“Regarding your questions as to how many or who is petitioning – I’ll say this.  Both the number of candidates and those expressing an interest in running is fluid.  In fact, I just took paperwork for a new petitioning candidate this evening.  We will continue to welcome anyone interested in serving and running on our line, as they have until August 4th to submit petitioning paperwork.”

Former Board of Education member Erik Anderson has registered to run for constable, according to McQuaid. Sources say it’s under the Independents for Norwalk banner.

Independents for Norwalk has raised $4,485 and spent $698.85, leaving a balance of $4098.15 as of July 1, according to the campaign filing. All but one of the donations came from Norwalk residents; Attorney Marc Grenier lives in Danbury, according to the paperwork.

Itemization is below. Correction made 4 p.m., Thursday.

Total donations from contributors listed in the filing:

Two Things hit me right away:
1) Based on the $ 1,000 Donors it seems like Rilling is running for Mayor in Stamford. Does anyone else get that impression? That being said, the Cingrari family is terrific. Just not sure why all these Stamford people are supporting Harry financially
2) Ed Camacho putting his money where his mouth is. Good for him. On a side note has anyone in town noticed Ed’s picture at practically every bus stop. Prior to Ed those same ads had pictures of “Spitting” Image of Bob Duff last election. Coincidence? Probably, but interesting all the same.

This is a perfect example of why we need multiparty reform for Norwalk.

For all that Rilling’s opponents rail about one-party rule, they are conspicuously silent about the one type of reform that could help tip them over the edge of ending his machine’s odious reign.

I call on Riddle and Brinton, as well as the rest of the opposition to the political machine that runs Norwalk, to PUBLICLY commit to multiparty reform – whether it be Ranked Choice, Approval, or any other sane method that does not put Norwalkers at the mercy of having their votes to end this machine being split.

And just to be clear, this fear of vote-splitting has its fingerprints ALL OVER this primary cycle. Kydes bowed out rather than risk splitting the Democratic vote. Brinton running for Council is on its own a smart move, so we can’t really accuse her of untoward motives, but there’s no denying that it cleared out the “opposition” slot for Riddle; Lisa’s past campaigns have also suffered from having the opposition vote split.

Look, this isn’t NYC. We don’t have 15 candidates. And if we have any kind of local pride, I’d hope we can pride ourselves on being able to more competently execute a Ranked Choice tabulation than NYC.

But we get the politicians our elections give us. Our elections are giving us this machine, a machine that’s killing our businesses – unless they pay the right people! – and handing the rewards of our growth over to rich developers. Change the elections, change the politicians, end the machine.

Harry must be doing something right if all the opposition can come up with are two people who went for higher offices and failed and are now going for lower offices, and are destined to fail again. Riddle and Brinton should have sat this one out. All they will gain is sealing their political reputations as losers once again. When they both lose how can they ever run for office again?

Some spinnaker money, Suchy donation, a few city donations including the elusive Jr Mayor and Stamford special interest money wasted in support of a campaign that’s guaranteed to win. Taxpayers can see who wants preferences

@Bobby – Lisa IS sitting this one out by going for council.

But the opposition needs to do more than just take its licks every 2 years. Multiparty reform is the best way to fight back.

Happy to see Lisa B running as an independent but am surprised to see the large donation from Republican, Bryan Meeks and other well-known Republicans. Is this to scuttle the Republican candidate and run “their” candidate but without the baggage of the Trumpublican Party, which more than one non-Trumpist Republican has called fascist?

@Steve, it’s not large when you divide it over dozens of people who are trying to make Norwalk a better place. We need more than glasses of water with Ds on them running the city. Traffic is insane because of lack of planning and we are headed to a New Rochelle like existence of permanent gridlock in the urban core. New Rochelle is bulldozing most of their mistakes from several decades ago. It’s too bad someone took a paycheck here over doing what is right. Now we will all be paying for it as long as we decide to make a home here.

Political bigotry is still bigotry and we have many here in Norwalk who would be just fine if Trump had a D behind his name while finding some other Republican bogeyman to blame everything on. Bush was Hitler. McCain was a racist. Romney was a mysoginist….fill in the blanks, because it’s all you have…blanks.