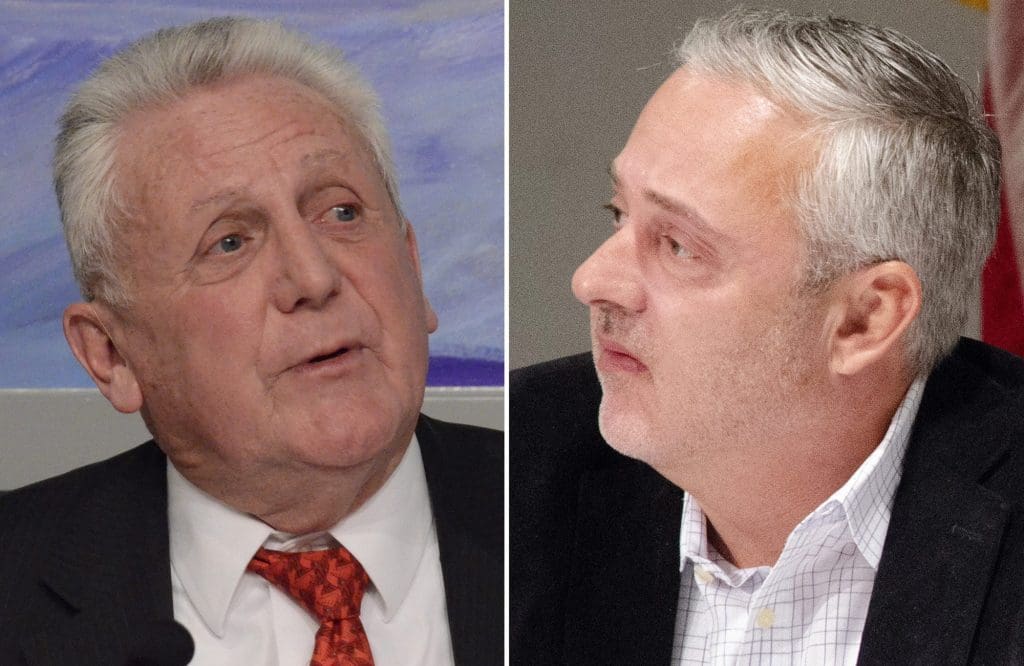 Kydes “has not finalized his intent to run for Mayor but plans to make his announcement in the coming weeks,” a press release said.

The Kydes for Mayor campaign finance filing states that it’s for the 2023 election, a switch from his previous filing which stated it was for the election this fall.

NancyOnNorwalk called Kydes and emailed him, asking about the discrepancy – the form says he won’t run for any office this year, but the press release says he “hasn’t finalized his intent to run for Mayor.”

“I opened two exploratory committees. The first one that was opened in 2020 with no activity was closed and the second one is still active,” he replied.

He didn’t reply to a second email, sent at 9 p.m., asking why the box was checked.

“Others have jumped out and jumped back in.
“I think we all believe his intention was office of Mayor.
“He looked at his options and chose to possibly run in 2023 instead.
“You will see John Kydes on the ballot in 2021, it just won’t be for Mayor.”

Rilling raised $45,405 in the first quarter, adding to the $40,252 on hand at the end of the year. Papers were due April 10 for the period ending March 31; the total raised overall was $85,657. The figure above is from a press release and includes donations made in April.

Kydes for Mayor raised $15,412 in the first quarter. The maximum donation for an exploratory committee is $375. Kydes received 19 maximum donations, seven of them from out-of-towners.

Republicans have not announced a candidate.

“The Rilling campaign is pleased with its fundraising efforts, having raised $87,430 in total monetary receipts from 264 donors – the vast majority of whom are individuals and Norwalk residents. Mayor Harry Rilling continues to talk to voters and it’s clear they want experienced leadership to help Norwalk recover from the pandemic,” campaign spokeswoman Lauren Gray is quoted as saying in the press release.

“I am thankful to each and every contributor,” Rilling said in the release. “Our efforts of reaching voters and listening to the concerns of every Norwalk resident continues. As we emerge from the pandemic we remain optimistic for the future of Norwalk. I am thankful for the continued support of so many Norwalkers across the entire city. I also remain proud to have the support of working families and labor unions such as the Fairfield County Building Trades, carpenters, plumbers and pipefitters, electricians, roofers, bricklayers, laborers, telecommunications workers and firefighters.”

Kydes was elected to his first Council term the same year Rilling became Mayor. “Over the last few months John and his team have been working hard on a public outreach and fundraising,” the press release said.

“The feedback and donations have exceeded my expectations. We wanted this to be a grassroots fundraising campaign and we have achieved that goal,” Kydes is quoted as saying.

“I will spend the next few weeks working on my Exploratory Committee for Mayor and helping my community get through this pandemic with my work on the Council,” Kydes said.

Norwalkers are concerned about how the city will recover from the pandemic, it said.

“We need to be creative on how the city generates revenue and how that revenue will benefit residents. With smart planning Norwalk can be financially stable without putting that burden on the taxpayer or losing what it means to be a Norwalker,” Kydes said. “…I have no doubt that Norwalk will come out of this pandemic stronger and better than before. We have a lot of work to do but I am ready for that challenge.”

Receipts from other committees

Purchase of $250 in advertising

Detail of the from filed by Kydes for Mayor, dissolving his exploratory committee.

Not a great look for Kydes. Misrepresenting (lying) to the public that you “haven’t decided yet” when you’ve already withdrawn is so lame. Then telling Nancy he has another committee – but not telling her it is for 2023? Why? Not that it’s ever ok for leaders to lie to the public – but why lie about this? Does he play this fast and loose with the truth? Then filing a form where he swears he will not seek ANY office for the 2021 municipal cycle. Does that mean he’s also not running for council? Or is he lying again or is he that sloppy? Thank goodness his “exploration” made it clear to him he is not a viable candidate for mayor.

Wow, even I am shocked at the mayor’s donors. Virtually no ordinary citizens…all minor politicos and big time developers and people relying on city contracts. To me this is evidence enough of what I and many have been saying for almost 8 years. Corruptocracy enabled by single party rule in CT is a big issue. Time for a change, even if it is to another democrat.

…and I totally donated to Kydes…shocked not to see my name.

Can someone explain why all the developers are listed for Harry? Do you have to pay a vig to develop here? If i make a donation can someone tell me when city hall is going to open please? Dont expect a donation from the sailing school you pushed out from the beach.

Without all the outside donations he’d have raised under 15k. Whoop Dee doo.

Wow Harry is loaded up with donations from industry people who all benefit from him giving them something in return. John’s list is all people who want change and live in Norwalk and want something better for our children. Big business and developers win I guess. Our kids will pay the price if Harry Rilling gets reelected.

Seriously, Norwalk. Is Kydes the best we can do for 2023? I’d like to see someone challenge Harry and give him a run for his money in 2021 but that ship seems to have sailed, but John Kydes would be a disaster for this city. He has proven he can’t even be honest to the public, when someone shows you who they are believe them….

I assume Harry is truthful 100% of the time? stop drinking the Kool Aid

Yogi is thinking, this is Deja Vous all over again.

Rilling fill’s his campaign coffer’s with out-of-town developer moneys, union contractors, and couch change from local politico’s desperate for a seat on “the committee to determine equal equity within equitable equalities”.

Norwalk should know how this plays out.

Following his election, every want and need of those who “contributed” get green lights all the way down main street. Locals go to court for sheds. Fortress Apartments pop-up in every corner of the city, beyond need or belief, and paid traffic studies say “nope, nothing going to happen here”, and shortly thereafter, as locals sit in grid-lock – the answer is – we’ll pay a consultant (who also contributed) a $300,000 contract to “study” what went wrong.

City Hall is closed – everyone gets a raise. Some even get promotions.

The BOE gets nothing.

Bob Duff gets a trophy.

Is this city really going to make the same mistake again?

I just, I’m sorry, I can’t with Kydes. I’m sure he’s a nice guy and has a great family. I’m friendly with friends of his. And yeah, he ground my gears with his amateur political theatre of an amendment this budget season, but we’ve gotta do better here folks. I’m not saying Rilling is the answer and getting into those weeds, I’m just saying, can’t we find someone to jump in who’s out of the fray, shows some intellect and creativity, and isn’t part of the “usual suspects” Norwalk political campaign carousel? Because if this move re: his “potential candidacy” is any sign, he just isn’t up to snuff. I mean, really.

Thank you, Nancy, for digging into the deets re: campaign donations. Unlike The Hour, which ambled out from a nap to regurgitate the only-in-fantasy-land statement from Rilling’s campaign manager that most donations came from individuals and small businesses.

Curiosity and some basic math shows that,”Rilling received 23 maximum donations, three of them from Norwalkers. Most are tied to development.”

THOSE are the facts that I want to know as a Norwalk taxpayer and share with my neighbors.