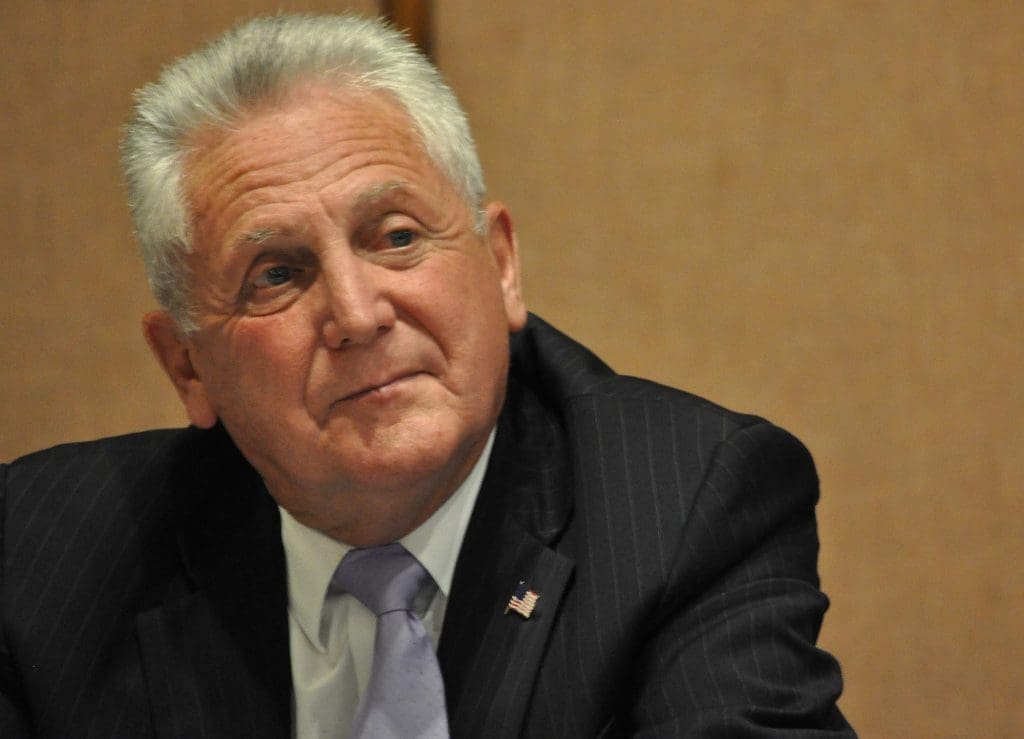 Rilling receives about $86,000 per year from his role as police chief, then-Norwalk Finance Director Tom Hamilton said in 2013. He is fully vested in a 401A plan as mayor because he is more than 65 years old, Director of Personnel and Labor Relations Ray Burney said Monday. Rilling also makes more money as mayor than he did in 2013-15, having in 2016 accepted a raise authorized by the Common Council in 2013.

Some Norwalk voters claim that Rilling wants to get re-elected so he can have a second pension.

Hamilton said in 2013 that Rilling would need to be mayor for five years to collect from his 401a but this is incorrect, sources said, an account that has now been confirmed by Burney.

Rilling was first elected in 2013 and is seeking a third two-year term. He is being challenged for reelection by Republican-endorsed candidate Andy Conroy, unaffiliated candidate Lisa Brinton Thomson and State Rep. Bruce Morris (D-140).

“All city non-public safety employees hired after 7/1/2012 are entered in to the city 401A plan that provides a required contribution from the employee equal to 5% of the employee’s salary which is matched by the city,” Burney said in an email. “The employee is fully vested in the City’s contributions after five years or after reaching the age of 65.  Mayor Rilling was first elected in 2013 and participates in the 401A plan under these provisions. Mayor Rilling is fully vested in the Plan because he is over 65. The amount any employee receives from this plan depends upon their total years of service, their choice of investments and their ultimate choice upon retirement of how they decide to draw the money out of the 401A Plan account.”

During the 2013 mayoral campaign, then-candidate Harry Rilling made it known that, if elected, he would turn down the $23,944 pay raise that had been authorized by the Common Council.

“I’m not taking any pay raise for the duration of my term as mayor,” he said in January 2014.

Rilling said Tuesday that he meant his first term as mayor. “I don’t recall saying I would never take it,” he said.

The Common Council had to take action to allow Rilling to turn down the raise, Rilling said. That would have need to have been voted on again after he was reelected in 2015, but that time members of the city’s staff urged him to take the raise, he said.

“As we were going forward and people saw how much time I was spending working, late at night, going to meetings, they said, ‘You really should take the pay raise,’” Rilling said Tuesday. “I said, ‘There’s not a need.’ But … they convinced me to take it.”

The 401A is mandatory, Rilling said.

“Every person who is employed by the city has to be a part of it,” Rilling said, explaining that former Mayor Richard Moccia was also part of the 401A plan. “I don’t have a choice. They take 5 percent of my pay each pay period and then they match it.”

If an employee isn’t vested they could lose money on the 401A, because if the city’s investment vehicle loses value then the investment was made entirely with the employee’s money, he said.

“Like all City employees enrolled in the 401A plan, the Mayor has a mandatory 5% contribution to this account,” Burney said Monday. “The City 401A plan works very much like a 401k plan.”

The mayor’s office has a million dollar price tag, not including the NPD pension Riling already receives. Good luck getting a phone call returned (Laoise King, you own me a phone call), or time with the Mayor (Sallly Johnson, that’s one of your jobs). So where is all this money going? Is Harry getting paid by the smile?

“I’m not taking any pay raise for the duration of my term as mayor,” he said in January 2014.

Guess it depends on the definition of “any”.

Hi Donna – didn’t get a message from you. Shoot me an email with your number and I’d be happy to give you a call. [email protected]

What an inappropriate time to bring this up. Why not comment on all the people who are double dipping? Why single out the person who is running for office? Many of our superintendents were collecting money from New York and earning money towards a pension in our system.

Fuel to the fire. Mssrs. Conroy and Morris, candidates without a platform: Drop out, support Lisa Thomson, and Norwalk will have a chance to realize its potential.

Shame on Mayor Rilling! Always about the money and not about the taxpayers! I do support Lisa Thomson and she will get my vote. Time for the clowns to leave!

Thanks, Laoise, I will drop you a line. Sorry you did not get my voicemail, but I did leave one.

The information I was seeking yesterday on behalf of Quintard neighbors who were concerned about activity at 17 Quintard, the Firetree property, I was able to find out on my own after five or six phone calls, including calls to SNEW, customer service at city hall, Bruce Chimento’s administrative assistant and finally Bruce himself. While I’m not completely comforted by the story of how 17 Quintard got a new sidewalk while everyone else is still waiting for theirs, at least the house does not appear to be for sale.

Quintard neighbors asked the Mayor about SNEW trucks at 17 Quintard last week. Mayor Rilling said there was a water main break. DPW confirmed this. But Tom Villa at SNEW said this was not the case. So we are all still scratching our heads over the water main story.

The persistent confusion and multiple plot points suggest one single pressing need—a City manager. Perhaps if Mayor Rilling had had more support for a new Charter Revision Commission from the CC, we’d be on our way to a Council—City Manager system now. The last CRC knew they did not finish the work that the people wanted.

It’s election time, and that’s exactly when readers need reporting on candidates and incumbents. I know that Nancy’s only regret around this is that there isn’t time to do more.

Often, reporting of this nature is upsetting to partisans, who express frustration because they believe certain coverage should be more, or different, or different words should be used. Other partisans start with the presumption that there is bias, which naturally leads to seeing it in every word that Nancy writes. Still others criticize the writer when the facts of a story are unflattering to their candidate. In recent weeks NON has been accused of bias against every mayoral candidate, except for the one who is suing the City. Mark Chapman liked to say that if everyone thinks we’re unfair to them, we’re probably doing it right. I agree.