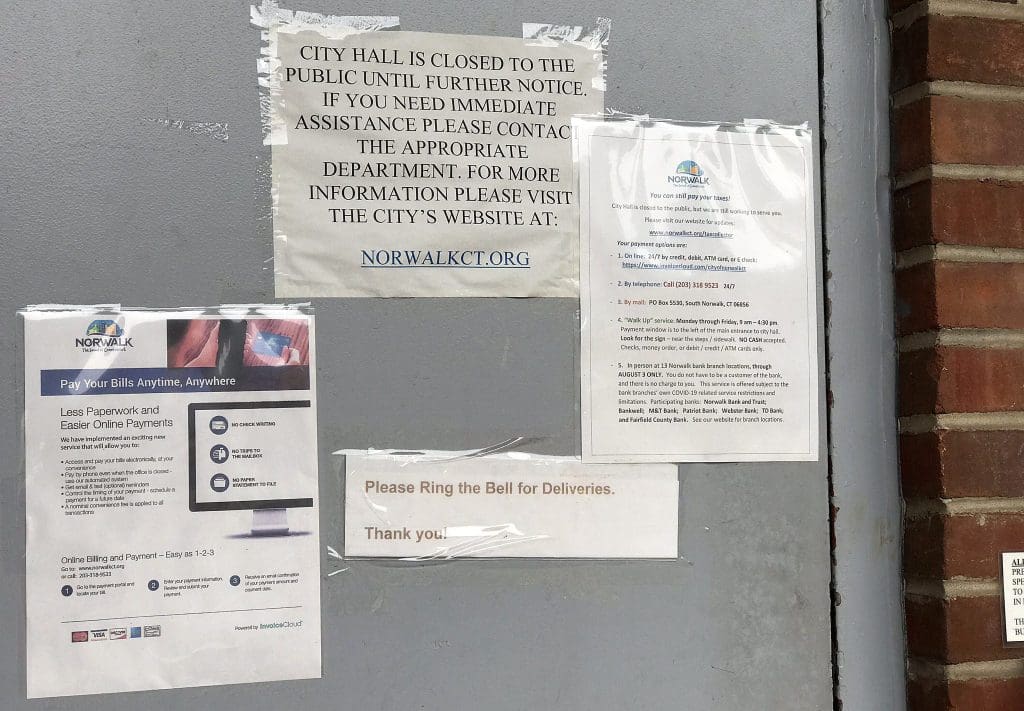 Signs on the door of Norwalk City Hall.

Norwalk is planning to reopen City Hall on Sept 8, the day after Labor Day, by appointment only, Mayor Harry Rilling said at Tuesday’s Council meeting.

Visitors will have to call whatever department they’re going to make their appointment, he said. Their temperature will be checked before they come in and if it’s more than 100 degrees, they will have to reschedule.

“We are also planning on having a scheduling software so that the guard will know exactly who has appointments and who doesn’t,” Rilling said. “The person coming in will present an ID. Hopefully we will have the technology at that point to make the person a badge and then call the department that this individual is going to visit and have them come down and escort them.”

“The State of Connecticut has provided $8.2 million to the Norwalk Public Schools to help with a reopening plan. We’re number two in the state behind Hartford, so we believe we got a nice little stipend from the state,” Mayor Harry Rilling said at Tuesday’s Council meeting.

The $8 million from the State “might not be enough, that might be a $12 to $14 million shortfall,” Rilling said Tuesday.

NPS estimated $20 million in reopening costs, but the plans have shifted and continue to evolve. Opening day was recently delayed a week, to Sept. 8.

Rilling said he’d had a discussion with Norwalk Superintendent of Schools Alexandra Estrella and, “when she found out that we were opening City Hall on Sept. 8, she thought it was wise to push the school day school year back a couple of days, so that teachers can have more professional development and they can prepare to do things in the schools to make sure that the students and the staff are going to be protected as well.”

Norwalk has just issued its capital budget bonds and got an interest rate of 1.67, Rilling and Chief Financial Officer Henry Dachowitz said. The Triple A bond rating has been reaffirmed.

“The reason we got that is because people want to invest in our community,” Rilling said. “Because once again, all three bond rating agencies found us to be fiscally responsible, fiscally sound, and we are Triple A bond rated through all three agencies. And that’s a testament to the hard work of the team, of the Council, of the administration, of the people that work for us who really, really know what they’re doing and do it well. So I wanted to just remind everybody about that and thank Henry and his team for that as well.”

All 3 ratings agencies had Enron at AAA 2 months before their collapse. What are the property tax collections? Why is this information buried? With the Governor’s eviction moratorium, how are rental property owners paying their mortgages and taxes? When city hall opens, will it be 100% staffed or does the vacation for some continue?

I love it when politicians brag about how they are saving money borrowing with low rates. Connecticut is drowning in red ink, no matter the rate.
Heroin is inexpensive too…it does not mean we should all fix up.

I find it utterly fascinating that City Hall is going to partially reopen on September 8th, but you need to make an appointment, and your temp will be checked at the door. Didn’t I read that these same people determined that Norwalk schools should reopen and that temperatures will NOT be taken at the door, because it’s not an effective way to determine if someone is ill? Wasn’t that reported or mentioned on this site somewhere? Norwalk has no problem protecting these bureaucrats and admin assistants, but not teachers. My daughter is a teacher in the district, and she told me that if she were to take a leave of absence, she would not receive unemployment or any sort of benefits. I hope she will be okay. Politicians are so focused on mentioning that school children will be fine, but make no mention of the teachers and people that students will bring disease home to. Unbelievable and disgusting behavior.

Regarding property tax collections: I’ve been preparing the same reports for the 20+ years I’ve been here. Nothing has changed. Nothing is “buried,” and nothing is hidden. I provide those reports to our CFO and others within our department; the Administration; the Common Council; and the Board of Estimate and Taxation. They are also all available on line (details below).

My office is, and has been, open to serve the public at our walk up window since April. We did that to continue to collect what amounts to 89% of the city’s operating revenue.

If you go to their most recent meeting (August 2020) and scroll down the meeting agenda, pages 12 – 15 are my monthly reports for that month.

My reports are at pages 22- 25 of that agenda. All the Common Council agendas, and reports, can be found here:

Also, the Norwalk website Dashboard includes summary information on tax collections in its finance section. I update that every month, sometimes multiple times a month. You can view that here:

In a nutshell: we had collected in excess of $160 million in tax collections so far through the second week of August, and were at about 45.7% of our expected collection. That information appears in the link above, so you will be able to continue to check it as we go forward through the fiscal year.

The Common Council and Mayor agreed that we would allow Norwalk taxpayers until October 1 – basically an additional 60 days – to pay taxes without interest due to COVID 19. So it stands to reason that yes, collections through August are down, because we gave folks more time to pay. Nonetheless, many folks did pay, and did not take advantage of the extended grace.

You can visit that home page to find updates on our office hours, payment information, and so forth.

I don’t often comment on things here, but when somebody says I am failing to disclose, or hiding something, I can’t let that go. This comment is also posted on another recent NON story where a similar accusatory comment was made. Please forgive the redundancy.

Bryan Meek, at a recent BET meeting there was good news that tax collections appear to be on track for now.

@Lisa, these comments were not aimed at you and many are aware that you have been working your tail off while others are out boating. The comments are more aimed at the news coverage where all we get is “appear to be on track for now”. That isn’t hard data, which shouldn’t be that difficult for the higher ups to communicate in a short sentence. But alas, we have to dig through meeting minutes of voluminous PDFs and also have basic knowledge of modified accrual systems. The dashboard is nice but without year over year data, it doesn’t tell us too much. Munis offers a public portal access for citizens, but that is the last thing we’d want our taxpayers to have here under current leadership I’m certain.

In any case, the prior comments “appear to be on track” are wildly optimistic in my opinion and you have your work cut out for you.

The reality for those who have businesses that are still not allowed to operate, rentals that still can’t be collected on, mortgages and taxes due are going to suck the life out of your collection rates in a few short weeks here. While Congress is busy trying to fix decades old problems with our mail system, liquidity in these shut down enterprises is just about at the event horizon.

CNBC was forecasting an 8% contraction nationally and we are one of the more shut down areas. That would be a $30 million hit. This is what we need to prepare for and “appears to be on track” shouldn’t let anyone sleep at night. Many levered businesses are simply going to cease operations altogether and walk away from their obligations.

Lisa thanks for setting the record straight with facts. We will unfortunately always have those who attempt to spin things for political gain.

@Bryan Perhaps you could do some digging and give the readers a deeper look at this question. As you are well aware, we are stretched thin at NancyOnNorwalk and don’t currently have that kind of bandwidth but a contributed piece on this topic would be great. Interested?

@Claire, I’ll try. It’s not easy as just spending time outside of normal 80 hour weeks. Munis sells a public portal, but that seems to have escaped our leaders for too long. I’ve seen seat licenses for cities our size much cheaper than most of the lawsuits that hit us. But it isn’t; so much a software problem as it is a total failure of all levels of government to keep up with the times. Most software companies would give free trial runs, but we are just not there yet on our thinking. We probably need a few more IT managers to figure this one out.

@Bryan – Thanks, and yes, I understand this isn’t a simple task. If you want to send me an email where we can discuss this outside of comments, I’d love to. (Use our contact form or send it via a blank comment form which we won’t publish).Awesome!

It is a disgrace that city hall is still not opened.