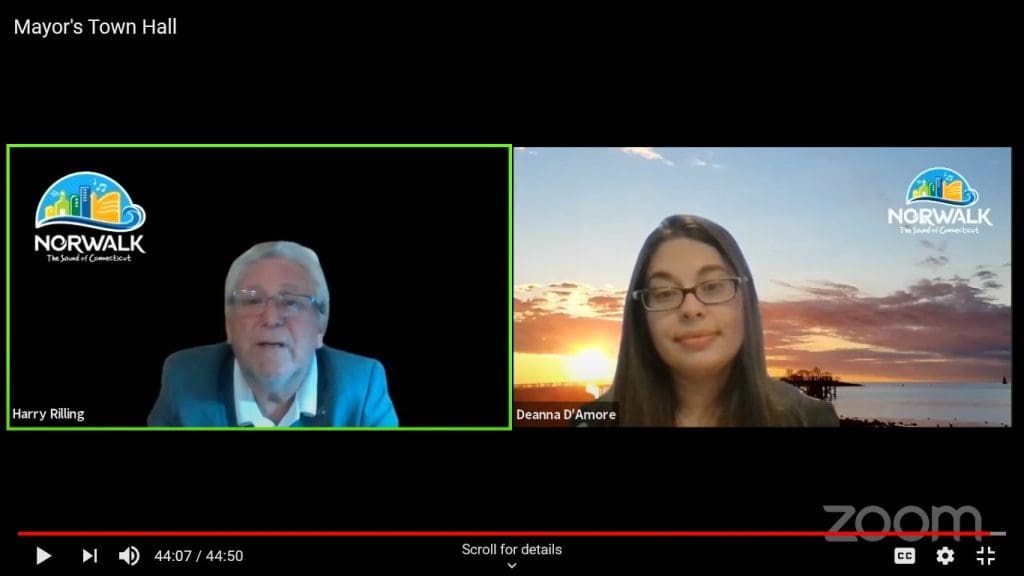 “When we reach a certain plateau in the number of cases or the diminished number of hospitalizations, we will enter level 4.” Rilling said.  “The next level would be level 3, then level 2 and then level 1 where we’re back to as much normalcy as we possibly can be.  All the levels will have various easings of restrictions.”

“The state’s strategies and the governor’s executive orders take priority over Norwalk’s,” he explained further. “We’re going to be working very closely and making sure that we’re in sync with the governor’s plan, and therefore tweak our reopening plan almost on a daily basis.”

Vets Park, the boat ramps and Fodor Farm will be open this weekend.   Some playgrounds will be open, but the basketball courts and playground equipment remain closed.  Large gatherings for pickup soccer, lacrosse, basketball and such continue to be prohibited.

“We still need to maintain physical distancing because we’re not out of the woods yet,” Rilling said.   We’re still seeing new cases each day.”

He said, “I choose to listen to the medical experts.  If you feel that you shouldn’t adhere to social distancing, or that you shouldn’t be wearing a face covering, think again, because it’s not about you.  It’s about who you might infect, and you might even cause somebody’s death if you’re not careful.”

Norwalk Director of Health Deanna D’Amore reported an updated Norwalk COVID-19 total of 1,745 cases and 101 deaths. This later turned out to be incorrect, due to data discrepancies. A person in their 60s who was reported three times in the system with variations in the spelling of their name, Norwalk Communications Manager Josh Morgan said Friday. The death total at the time of the town hall was 98.

D’Amore, during the town hall, spoke about contact tracing: “We need to do it in a more in-depth scale, and the cases need to continue to go down in order for us to handle the volume.  The State Health Department and all the local health departments are working very closely together, looking at volunteers who can do contact tracing.”

She continued, “Many of us have been blessed to already have volunteers supporting us.  We’ve had Norwalk Public School nurses supporting us, and we’ve had Emergency Response Team volunteers helping us.  We’re going to continue to grow our contact tracing capacity so that as the numbers decrease, we can do more and more in-depth follow-up with individuals.”

Question: “Are we going to have mass testing here in Norwalk including antibody testing?”

Question: “Is antibody testing something that the public should seek out?”

D’Amore: “On an individual basis, there isn’t a clear recommendation at this point.  There’s still more to learn about them.”

Question: “Can you talk about new criteria for leaving isolation after testing positive?”

D’Amore: “The CDC just updated that recently to 10 days past the start of symptoms, improved symptoms, and 72 hours fever-free without medication.”

D’Amore: “Hospitalization has been on a decline over the past 2 weeks.  We’re seeing less people being hospitalized.”

Question: “Can people test positive more than once?  Or if you get it, do you become immune?”

D’Amore: “That’s an area that we’re still not clear on.  We don’t have a clear answer on that.”

Question: “What are the age ranges of people testing positive and people dying?”

Question: “When you open the beaches will you consider having senior hours?   That would be appreciated.”

Rilling: “I’d love to be able to do that.  I don’t know if that’s something that we can do because of the difficulty of determining who’s a senior and who’s not.  We’d have to have somebody at the gate.”

Question: “Will non-Norwalk residents be able to go to the beach?”

Rilling: “We cannot keep non-residents from the beach, we cannot deny them access, but we’re working on a plan that when we first start opening the beach to limit as much as we can.  We’re seeking legal advice on that and how we can do that.  We’re trying to give Norwalk residents the first right to the beach.”

Question: “Is there any update on summer sports leagues?”

Rilling: “I’m not sure that you’ll see organized sports to any great degree this year.  I can’t answer that question right now.  I’m not optimistic that we’ll have any significant number of organized sports leagues this summer but let’s see what we can do.”

Question: “Any update on public golf courses and tennis courts?”

Rilling: “We’re working on getting those open.  We recognize that many other communities around Fairfield county have either not closed some of the tennis courts and golf courses or have reopened them, and we’re working to see how we can do that as safely as we possibly can.  I think you can probably expect an announcement within the next day or two.”

Question: “Do police officers have to wear masks in Norwalk?”

Rilling: “Sometimes when you see a police officer on an extra duty job, they’re not within six feet of anybody and they’re not wearing a mask, based on the governor’s regulations about wearing masks and face coverings in public.  We encourage police officers to take the same universal precautions as everybody else.  If they can’t maintain their physical distancing, then we ask them to wear masks.”

Question: “Have you come up with restaurant opening guidelines?”

Rilling: “We’re working with the state on that.  The governor is talking about outdoor dining.  If there’s outdoor dining and if restaurants are allowed to open, there will be social distancing requirements.  I’m sure the servers will have to wear proper face coverings.  The governor will be guiding us in that area.”

Question: “Is there any update on plans for a high school graduation?”

Rilling: “We’re trying to figure out how we could.  We’re going to try to do something.”

The mayor concluded by paying tribute to the medical, retail and restaurant personnel who shoulder the burden of the crisis day in and day out:

This story was corrected at 3:15 p.m. to show that Cranbury Park is not open this weekend. Details are in a story you can find here. The story was also corrected to show that it was written by Paul Lanning. The story was then updated to correct a misstatement, the death total was 98 at the time of the town hall.

Why can our neighboring communities restrict access to their beaches to residents only—but Norwalk can’t? Rilling gave a partial answer, no excuse for that.

Nancy on Norwalk–that is a good question for a news source like NON to ask.

Glad that the parks will be open this weekend… just in time for record lows and rain!

My kids NEED summer camp. Hopefully, Rilling knows this and allows for properly supervised summer camps with some slight modifications.
Also, schools NEED to be open for summer school. Enough of the distance learning. They need to be in actual schools.Too many kids falling behind. They need education AND exercise.

Sue Haynie—My understanding is that the Calf Pasture deed stipulates free access for Norwalk residents, meanwhile CT state law won’t allow municipalities to decide non-resident admission fees unless residents are also charged a fee (which can be determined by the municipality). i.e. if Norwalk charges residents $2 for a seasonal beach pass, then Norwalk gets to decide how much to charge non-residents. If the beach is free to residents, then the state puts a ceiling on the non-resident admission fee.

Why do so many in neighboring communities hold misconceptions about beach access? Public Land Trust doctrine applies equally to all US States having shorelines, granting the general public the right to access public spaces, irrespective of residency. As Mayor Rilling stated, Norwalk CANNOT restrict access to public beaches, allowing only Residents. To do so is discriminatory and violates the Public Trust. Nothing for Nancy to report on, in Rilling’s response, as this right to access public lands is well-established common law, dating back to ancient times. Should Norwalk choose to discourage non-residents from beach-going, by making it incredibly cost prohibitive, I hope your property taxes are enough to cover the ACLU lawsuits which would be an inevitable byproduct of such blatant exclusionary tactics.

@Paul. THere are properties in this city with deed restrictions that have discriminatory provisions. Should those be honored as well? If the deed, indeed does say free, how is it free if it costs taxpayers $ to sustain it. It can still be considered “free” if we charge citizens a nominal fee to make it revenue neutral. Sorry, some of us are just tired of watching this city literally be given away.

@Meghead. How many ACLU lawsuits have been hurled at Greenwhich, who charges $100 for non residents? Pray tell.

@Bryan, municipalities are allowed to charge for parking and overhead, as I said in my first comment. The answer to your question, however, is easy, (it was a HUGE news item) — See Leydon v. Town of Greenwich, 1998 CT Sup. Court. The information is out there, for all who choose to avail themselves. You could also study the activism of Ned Coll, a Nutmegger who devoted his time to protesting discriminatory practices meant to exclude persons from CT beaches. I believe there is also a book, titled ‘Free the Beaches’ recounting Coll’s work, from the 1970’s to recent years.
Here’s a link re: lawsiut–
https://www.google.com/url?sa=t&source=web&rct=j&url=https://www.aclu.org/press-releases/connecticuts-highest-court-rules-favor-public-beach-access-non-residents&ved=2ahUKEwi_qdjn3qbpAhUgknIEHcFqCq8QFjABegQIBRAB&usg=AOvVaw3kkNF0B5T-CCKy0X-o4Vur

My understanding is that federal shoreline access is only relative to the space between high and low tides. All property above the high water line is subject to local guidance. This ruling dates back to colonial times when the British brought this aspect of common law to North America.

Can we at least restrict Norwalk public beach access to legitimate American citizens and legal visitors?

Proper photo ID or proof of citizenship required…a utility bill would not suffice as SOS Merrill permits in our elections. Yikes.

If you can’t prove you are here legally, take a hike.

Boy, that would thin out the crowd, open up parking AND REDUCE THE RISK in a hurry. Hoorah!

Wow!To go from limiting to only residents to legal status is sad. You should be happy you have immigrants still working on the farms providing you food. Why dont you ask for papers then. You only want them to be your frontline worker’s but not enjoy the beach or parks. Where is your human decency. Shame on you.

Wish our president paid taxes, and kept his hand of women’s private parts