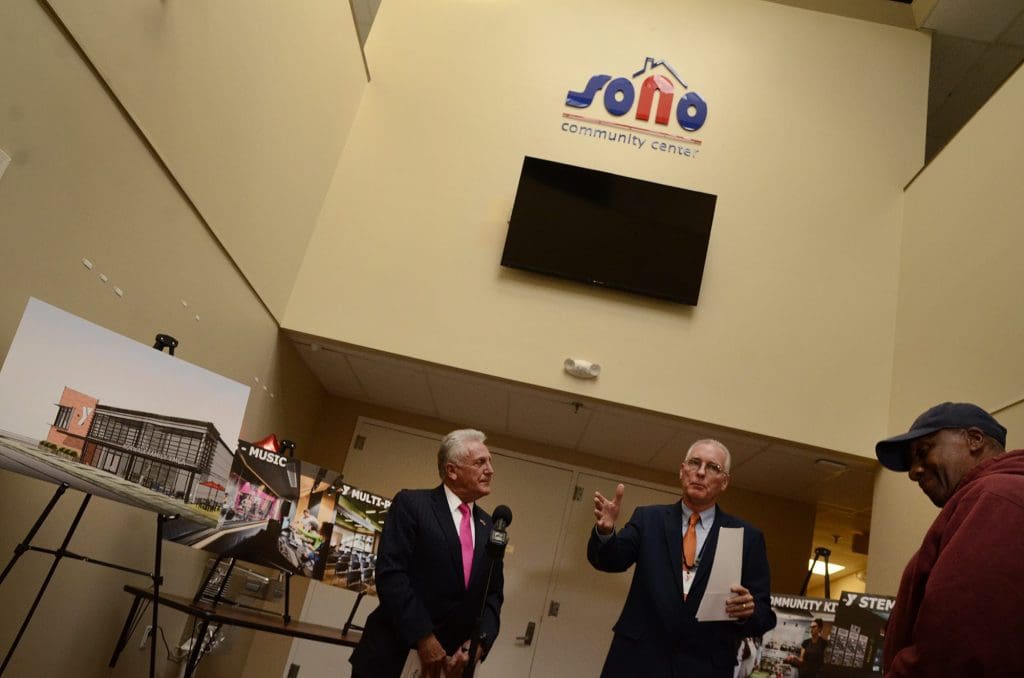 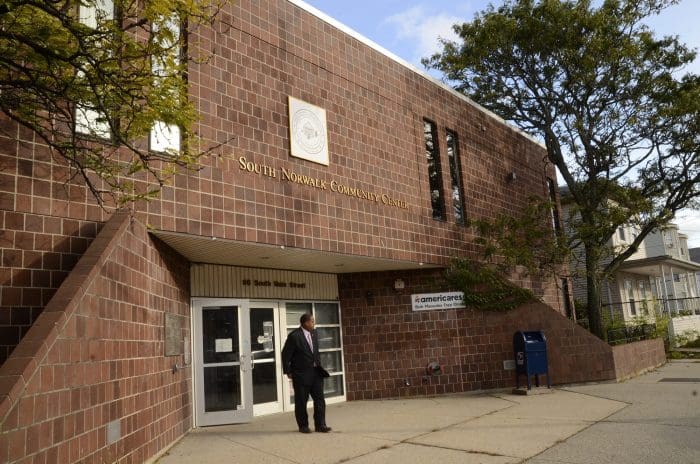 The former home of Norwalk Economic Opportunity Now (NEON) at 98 South Main St. would be transformed into a community center under a plan developed with the Riverbrook Regional YMCA, officials said.

NORWALK, Conn. – The old “NEON building” would be turned into a state-of-the-art community center under a proposal set to come forward to the Norwalk Common Council.

The Riverbrook Regional YMCA would put up $1.2 million and the City of Norwalk would contribute an equal amount from money collected from GGP as part of the approval of The SoNo Collection, to begin renovations of 98 South Main St., Mayor Harry Rilling and Riverbrook Regional YMCA Chief Executive Officer Robert McDowell said in a Thursday press conference. The YMCA is prepared to enter a long-term lease, after answering a Request for Proposals (RFP) a year ago.

“We did a feasibility study. We talked to community members to help us understand what’s out there to support in an environment like this, where we could thrive with a facility like this and renovate,” McDowell said.

The building has sat underused since the demise of Norwalk Economic Opportunity Now (NEON) in 2014, a bankruptcy that took years to unravel. In August 2018, the Common Council voted to buy the South Norwalk Community Center’s half of the building, gaining control of the entire property. The City then put out its RFP. 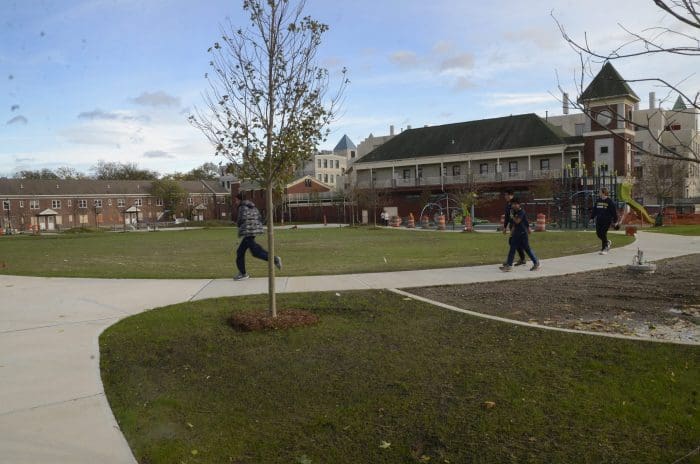 Norwalk youth use Ryan Park on Thursday. The park is behind 98 South Main and is in the process of being rebuilt. “Obviously, this is in the heart of a lot of development that’s going on,” Riverbrook Regional YMCA Chief Executive Officer Robert McDowell said. “It’s it’s really transforming this community, and it’s just fantastic to see.”

Norwalk lost its YMCA in 2012, when it closed due to the dilapidated state of the building.

“We never really left Norwalk,” McDowell said. “We didn’t have a swimming pool. We didn’t have a gymnasium, but we were in a couple of school sites and we were serving children in this community after school.”

The YMCA intends to keep AmeriCares in operation in the building, and “hopefully” expand its space, McDowell said. The South Norwalk Community Center will continue and the Norwalk Housing Authority may offer programs in the new facility. Renovations are expected to total up to $5 million and “I have no doubt that we’re going to be able to help fund this.”

GGP, then-developer of The SoNo Collection, in 2017 agreed to pay Norwalk $3.5 million because it was dropping its plan for a hotel over the mall. The company expressed a desire for the funds to help South Norwalk. The $500,000 deal with SoNoCC came from the $3.5 million, as well.

Rilling said the City would also seek State funding for the project. 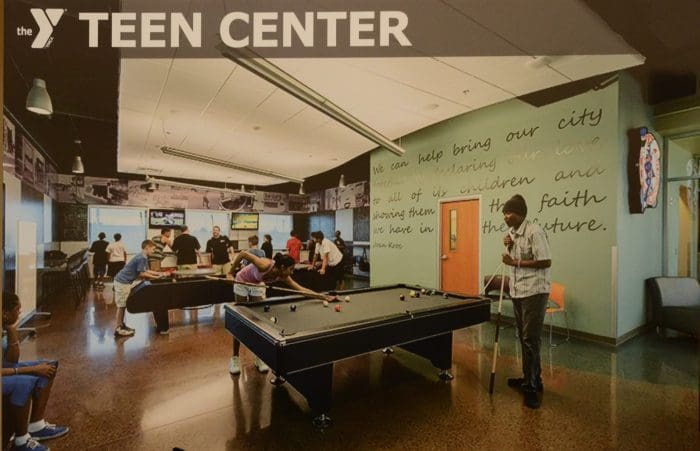 The rendering for a teen center.

A teen center is planned for the new facility, as well as arts and music programming. There will be a Science, Technology, Engineering and Math (STEM) component, McDowell said, joking that no one wanted to use the acronym STEAM because of the old Y’s issues.

A community kitchen is planned, to teach “young children and families, or anybody who’d like to learn a little bit more culinary,” McDowell said.

“This is really an exciting, exciting time, because we’re energizing this area for people to come down to get the services that they might need to have recreation,” Rilling said. “And if you look at the renderings here, it’s absolutely phenomenal…. what an addition to the South Norwalk area.”

NEON founder Bobby Burgess was on hand as well.

“I like the revitalization,” Burgess said. “It was dormant for a long time. So, we need to bring the spirit back into the community. I’d say the Y can do a good job. Let’s work with them and make sure the service is available to the community, what it was before.”

“An ad-hoc committee of the Common Council reviewed the RFP and has been working with the YMCA and other community leaders on this proposal,” a press release said. “The committee included Council President and Land Use and Building Management Committee Chair Tom Livingston, fellow committee members Greg Burnett and Barbara Smyth, and District B Council members Ernie Dumas and Darlene Young…. This proposal is still subject to authorization from the Board of Estimate and Taxation and approval by the Common Council. Both votes are scheduled to take place in the coming months.” 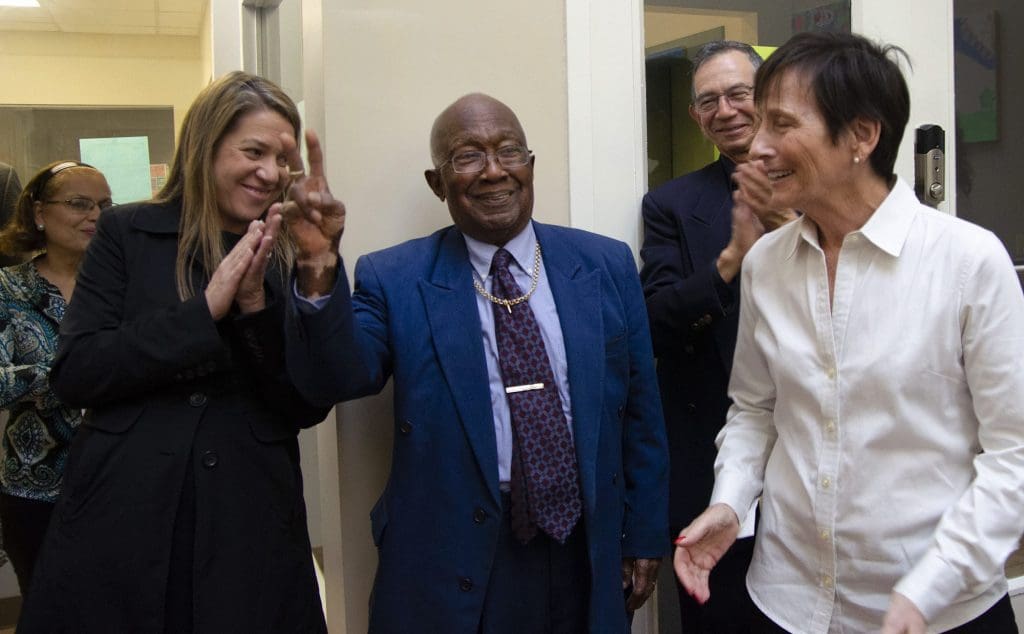 At last! Development for the public.

This is great news. I’m fairly new to Norwalk, can someone explain why our town does not have a complete YMCA like neighboring communities? I understand there was once one on West Ave. I assume there is demand for it… Bit of a shame.

Did anyone hear how many square feet the multi-purpose room will be?

Wonderful addition to Norwalk. Kudos to those that made it possible. Thats what its all about!

Al, it’s my understanding, from a meeting I attended, that the YMCA building was in terrible condition when it closed. One of the pools was propped up by a network of 2-by-4s. It was thought to be too expensive to maintain or repair.
At the time, Carl Gerard Cooke, chairman of the board of directors, released a statement: “Like so many other businesses and nonprofit organizations in the area, the YMCA has been adversely affected by the economic downturn. Due to declining membership and donations and the cost of maintaining an 84-year-old facility, our Y does not have the financial resources necessary to operate on a long-term basis. We are losing money every month on facility operations but our child-care programming is self-sustaining.

Thank you, Nancy. Not to take away from the article and its success, but this is unfortunate for our city. A place where children through seniors can learn healthy habits and perform physical achievement. I have been traveling to the Westport/Weston YMCA and have never fully understood why. Hopefully it will make a comeback someday!

Al, adding to Nancy’s explanation, I was a member of the Y on West Avenue for eighteen years, from 1988 to 2006, and was on their marketing committee for three years. Gradually, I and other members got the feeling that we were not the targeted group for membership, and that our $600+ annual dues were going to largely subsidized free programs, and memberships for the underprivileged. That’s all good, but while there were plenty of free programs for others, the main workout room was never updated, members abused time limit rules on machines, unaddressed by staff, and for some reason, the Director felt it was a good idea to close on many holidays, just when members were free to work out. Then along comes the competition, like Edge Fitness and LA Fitness. I now pay half what I did at the Y with better amenities, and reciprocity with nine or ten other facilities in CT and NJ.

@Steve Mann, thank you for that clear and honest explanation of the sad and inevitable passing of the old Y. I also hoped and prayed for its success, and was a full member for years including learning how to scuba dive in the deep pool. I recall the passionate and valiant efforts of many folks to save the struggling Y, including my old friend Maribeth Becker who helped organize a reggae fundraiser with Mystic Bowie in the parking lot, which I attended on a hot afternoon about 10 years ago.

For the record, I specifically recall a broken weightlifting machine that I asked be fixed at the front desk, not once or twice but about 5 times over a few weeks. Nothing happened, and I realized then that what I was witnessing was on organizational breakdown. I never blamed anyone, but just attributed it to years of financial stress that finally worked its way down to the staff on the floor.

I finally moved on to Fitness Edge and then LA Fitness where I still attend twice a week, but I miss the old Y. I’m happy to hear this new Y is opening, even though it’s smaller. The plan makes sense for the community it is designed to serve. I wish them well.

The previous 2 posts, bingo. Besides the laundry list of broken stuff, I had the feeling that management believed the paying customers owed them (more than) a living

I am glad to see that a Y facility is coming back to Norwalk. Driving past the old, unoccupied building still saddens me. When I worked on Connecticut Avenue, a group of us used to work out in the gym at 5am every weekday morning. We called ourselves “The Five O’clock Club.” In my running days, I used to train on the little indoor track during the winter. I believe a mile was 23 laps and you would have to reverse direction every so often to avoid damaging your knees from the banking. My father was the president of the Norwalk Y in the 1950’s and my maternal grandfather, who owned a local business, used to have traveling salespeople that he did business with stay at the Y. Hopefully, someone will eventually do something with the old building. For we Norwalk “lifers” it’s a beautiful building and part of our history.

Thank goodness the Y will be keeping the Americares Clinic in their building! For over 20 years Americares has been at 98 S Main St providing free health care to uninsured residents.

Confused. How can it be a Y if it doesn’t have a gym?

Jo – I think the devil is in the details – it’s being ‘managed by the YMCA. Whether it’s a fully fledged Y – remains to be seen. This announcement ‘may’ have been timed for a special day in November. All the details are likely not quite worked out yet.

I think from the description you can gather while sponsored in part by the Riverbrook (Wilton) YMCA, this is not going to be a YMCA. It mentions a multipurpose room and teen center. These things are available right now in Wilton in a new facility called the Comstock Community Center in Wilton. If you look on that website, they have a multipurpose room and senior facility. In Wilton, the Teen center is called Trackside and is a separate facility. This is being described like a combination of Comstock and Trackside. I think that is what Norwalk is getting, not a full scale YMCA. If you want that, you have the soon to be completed renovation of the Riverbrook (Wilton) YMCA which technically serves both Wilton and Norwalk now.