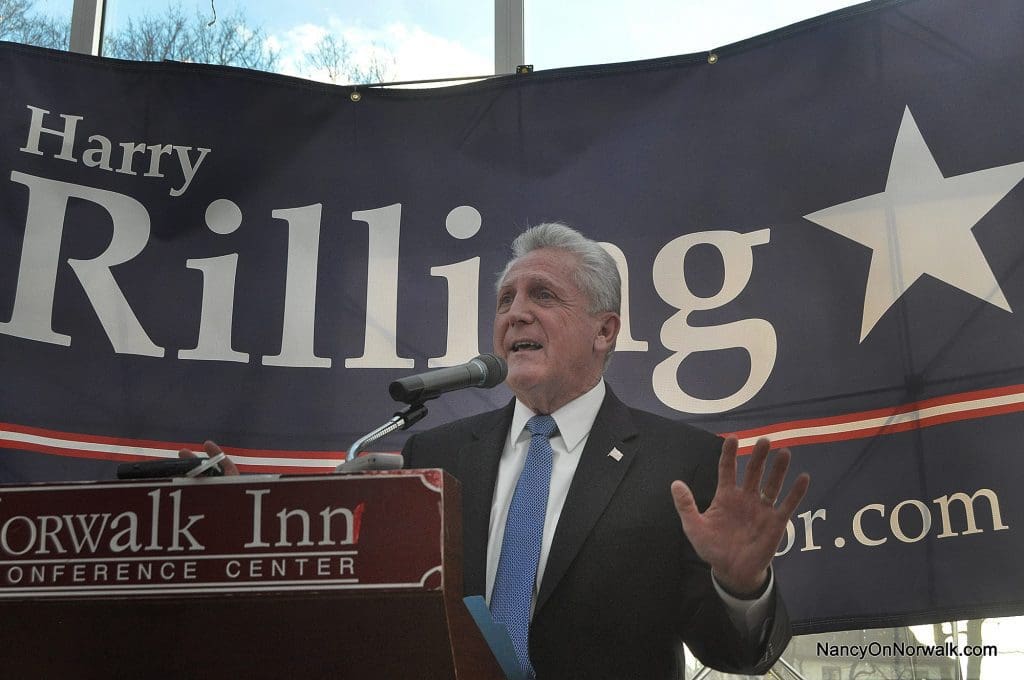 Norwalk Mayor Harry Rilling announces his bid for re-election, in January at the Norwalk Inn.

The campaign filed its first quarter fundraising paperwork Monday, on the deadline. As of March 31, the campaign had raised $96,745. The report listed 27 donors who have given $1,000, the maximum donation.

“I think we’ve done a good job at reaching out to the community with our fundraisers. We are very pleased at where we are right now,” Rilling said, adding that more donations came in after March 31 and there’s probably $102,000-103,000 in the campaign coffers now.

Town Clerk Rick McQuaid, a veteran of Norwalk politics, said he had never seen so much raised so early in a mayoral campaign. He called it an “incredible” tally.

“It’s not won by who has the most money but it does help to have the resources to get your message out,” McQuaid said, joking that Rilling could buy his own radio station.

Rilling has no opponents yet. No one has filed for an exploratory committee or a campaign, though some Democrats have been talking about taking him on. Without filing paperwork, they cannot collect campaign donations.

Asked what he would do with so much money, Rilling said, “We are going to run a campaign. Campaigns unfortunately cost money to get your message out. We have to show people what we have done and what we plan on doing in order to get the support that we need.”

“I am very pleased that people have stepped up to support my campaign,” Rilling said. “They believe that as I do that Norwalk is moving in the right direction. People are talking about Norwalk and what’s happening, so we want the opportunity to continue that momentum that we have. So I am optimistic in that I am optimistic about Norwalk.”

Smaller donations were made by 19 people.

The campaign held three fundraisers in March, the filing said. It had $37,277.60 on hand at the beginning of period; $15,600 was raised in this quarter with the purchase of advertising in a program book or sign.

If he runs unopposed what’s he do with all that green?

Rilling is one of the only few level-headed Democrats I know. For that reason, I’ll continue to back him.

Lot of outside Norwalk money.

What an embarassment for this City.

Are there any more Public Pensions for the Mayor to collect?