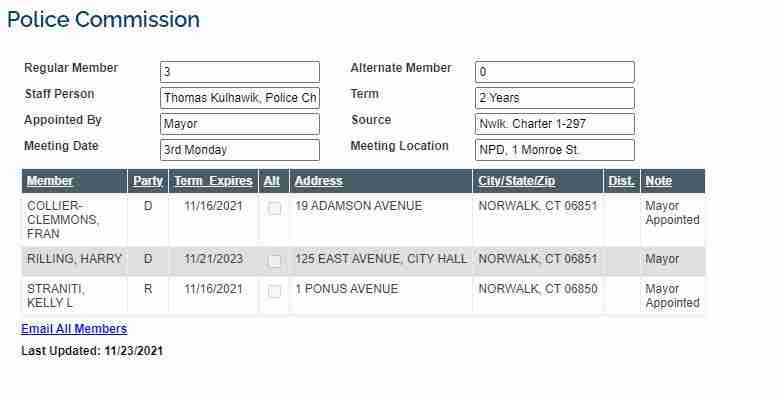 A Monday screenshot from the City’s website. Fran Collier-Clemmons is still serving on the Police Commission but Kelly Straniti resigned in August. 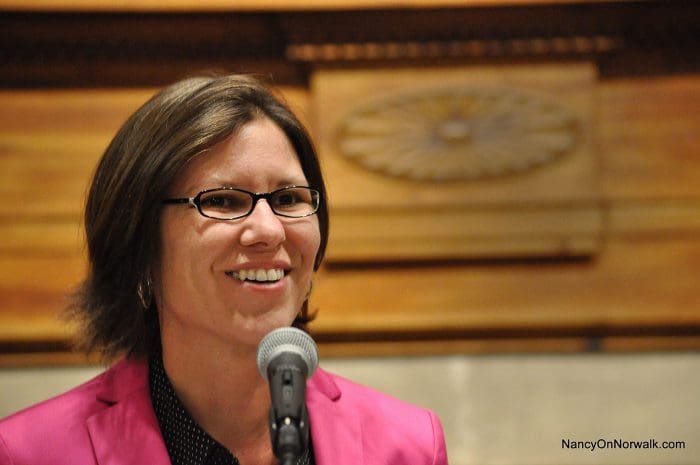 NORWALK, Conn. — Mayor Harry Rilling says he’s poised to fill the open seat on the Police Commission and the Traffic Authority after a six-month vacancy.

Kelly Straniti left the bodies in August. Republicans say they have offered multiple candidates and are frustrated that none have been appointed.

“When we first learned of Kelly Straniti’s relocation from Norwalk a number of months ago, several members of The Republican Party asked to be considered for her replacement as a City of Norwalk Police Commissioner. Those names were forwarded to The Mayor’s office for consideration,” wrote Common Council member Thomas Keegan (R-District D). “In recent Common Council leadership meetings with the Mayor the issue has been discussed. The Republican Party believes strongly that there be equal and balanced representation on such an important commission. Our sincere hope is that the appointment be the right person for our City and represent the best interests of all.”

Both bodies have three members: the Mayor and two residents. Although separate entities, the same three commissioners serve on both; the City Charter specifies that the two residents cannot be from the same political party.

Rilling and Commissioner Fran Collier-Clemmons, both Democrats, have carried on as a two-member body since Straniti’s departure.

“This was months ago. I do not understand what the hold-up is,” Wilms said.

Rilling said, “I’ve had many people express an interest and it’s important to select the right individual.”

He narrowed down the field to seven candidates who he thought were “better suited to the position,” he said. Now it’s down to two, and “I will be selecting in the next few days.” 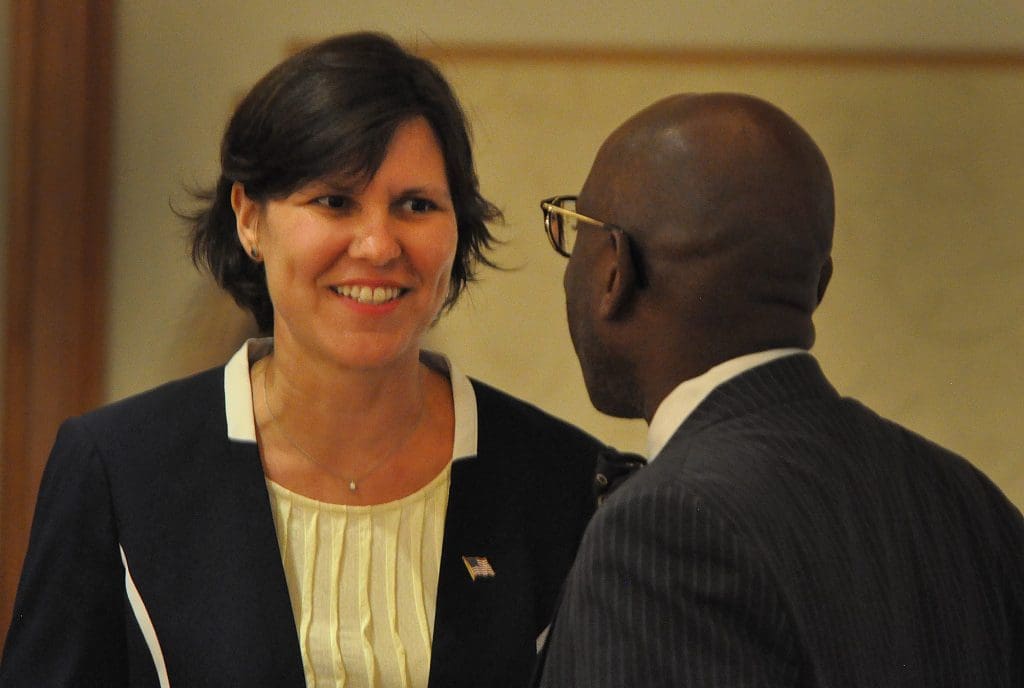 Republican State Central Committee member Kelly Straniti speaks with Darnell Crosland at a Norwalk Republican Town Committee meeting in 2019. Mayor Harry Rilling appointed her to the Police Commission and the Traffic Authority in November of that year.

Straniti was born and raised in Norwalk and has been very active in the Republican Party. She ran for Mayor in 2015, as Rilling’s first opponent for reelection, and was formerly on the Zoning Commission and the Common Council.

She was also a Republican State Central Committee member until she moved away in August.

Her Aug. 5 resignation letter to Rilling said, “As you know, I’ve been in the process of a career change since I earned my Master’s Degree in Homeland Security, which requires a relocation to the DC area. It is now coming to fruition and my husband Artie and I found our dream home in Ashburn, Virginia so we are moving on August 19th. Although this is going to be a new and very exciting chapter in my life, I am sad at the same time to leave my hometown of Norwalk.”

Straniti said Wednesday that she’s still running her Connecticut-based business of 18 years while she moves through the federal government’s hiring process.

“Artie and I are in this amazing suburb, about 30 miles outside of DC. We absolutely LOVE it here, everything about it. The winters aren’t as cold and long. The weather is, on average, 10 degrees warmer and in Winter that makes a huge difference. We were back last month for my mom’s funeral and it was 5 degrees! While it was about 23 here at that time. The town we’re in, Ashburn, is wonderful. It’s pretty new and came up as a result of the population growth in Northern VA. Apparently about 20 years ago it was mostly farmland. We’re in a great quiet little neighborhood but also close to everything, great food, shopping, and history are all around us!

“We miss our son, Emerson (but he’s only 5 hours away and we’ve seen him a lot since we’ve moved) and we do miss living on the coast. We stay in touch with friends and people in the community there still, but have also built a community for ourselves here in Virginia. I gave myself about 6 months to settle in before I got involved here so I am now exploring options for volunteer work. I won’t be involved politically at this point due to my pending position with the government but I am definitely gearing up to help in my community here in some way. I’m looking at either doing something for veterans and/or volunteer work preserving and promoting our Nation’s history – lots of opportunities for both here! Both things that are near and dear to my heart.” 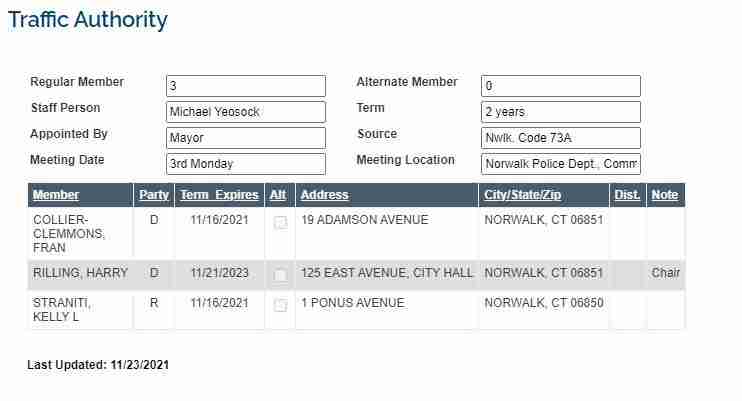 A Monday screenshot from the City’s website. Fran Collier-Clemmons is still serving on the Traffic Authority but Kelly Straniti resigned in August.

This would mean that the mayor would have to do some work. Is he going to have to consult his highly paid chief of staff to appoint someone to the police commission now? How bout examining the leadership over there at the department. We had two officers arrested for drinking and having sex in a hotel while on duty and another arrested this week for writing false tickets to Norwalk residents. Who is in charge of these people? By the way, the officer arrested this week was previously dismissed from Stamford! So why did we hire him? Shameful what goes in Norwalk

Once upon a time residents interested in local public service asked to have their names put in for consideration on local boards. Experience on local boards often provided the impetus of the next step of running for public office. In the days when we had vibrant political parties there was no shortage of candidates. Both Dems and Republicans knew that if they kept “fair standards” by keeping the boards equally staffed between Dems and Republicans the system would work well. It did.

Times have changed. One Party rules our City.