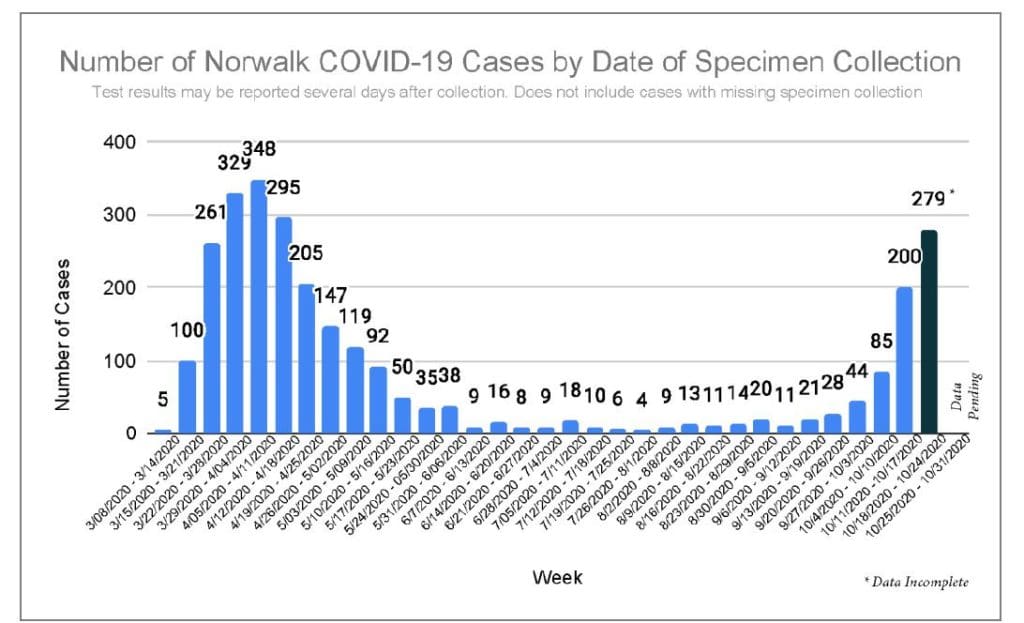 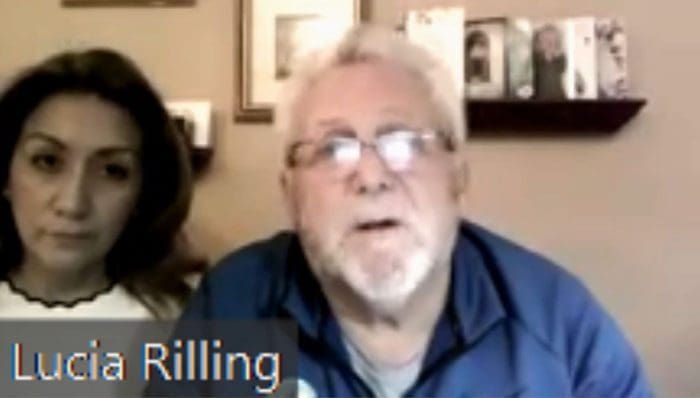 Rilling also said he and other members of his family are in quarantine because two of his grandchildren contracted COVID-19. “We think we’ve probably dodged the bullet,” he said.

Kendall and Silvermine cases were identified over the weekend and the number of teachers, staff, administrators and bus drivers in quarantine increased, Rilling’s evening update said. “Most teachers will continue instruction from home, but staffing levels for in-person learning is an issue in several buildings.”

The State named Norwalk to its red alert list last week because there were more than 15 cases per 100,000 residents in a two-week period.

Rilling’s Monday update reported an additional 68 positive test results citywide. On Sunday, there were 37 new cases and on Saturday, it was 45 new cases. The total is 2,871. No deaths were reported Monday; the most recent death was reported Oct. 5.

“The numbers are really troubling,” Rilling said Monday as part of an update to the Democratic Town Committee, explaining that “there’s a lot of people in quarantine” in the schools, “And that’s creating many of the problems.”

“It’s a challenge,” he said. “I can’t predict it. But if the numbers keep going up like they are I can only say that … it’s really reasonable to think that the schools will be closing.”

A press release is going out Tuesday, to “strongly, strongly discourage trick or treating, trunk or treating, haunted houses and other kinds of things,” Rilling said. “We’re encouraging people to do other kinds of activities that can be fun, there’s websites available that can tell people how they can make Halloween special for their children.”

Rilling said he’s gotten many phone calls from people concerned about his health, after The Hour reported Saturday that he is in quarantine due to exposure to COVID-19.

“Rumors of my demise are highly exaggerated,” he said. “We are in our 10th day of quarantine. We have three more days to go. We did not contract the coronavirus.”

Two grandchildren stayed at his place Oct. 13 and he drove them home the following morning, he said. Two days later, they tested positive.

“Lucia and I and my son have all had tests. And we’ve, we’ve had two, my son had one, and we came back negative,” Rilling said. “So we think we’re probably dodged the bullet. But we’re still keeping our hopes up and making sure that we do the quarantine for the next two or three days.”

While it seemed early in the pandemic that children weren’t catching COVID-19, now kids from infants to 9-year-olds are contracting the virus, Rilling said.

“So, they can get it,” he said. “It may not be as serious for them, maybe not much more than cold or a flu would be. But they can bring it home to an elderly parent, to an elderly grandparent. People need to understand.”

Rilling’s Oct. 5 update reported 52 children under the age of 9 had been diagnosed since the pandemic began. Monday’s update reported 81 children that age had positive results. The number of children aged 10-19 went up by 61 in that time period, from 90 to 151.

A DTC member asked about Norwalk Hospital. Rilling said that the Mayor’s Office meets with the hospital staff every Thursday and “right now their capacity is not being challenged to any great degree. We are still in good shape.”

Another member asked why people should get tested. “You may be asymptomatic. You may be a carrier or a spreader, and you don’t even know it,” Rilling said.

He and his wife know they’ve tested negative but it could still be in their bodies, incubating, he said.  “And keep in mind, unfortunately that you get tested today, you can get it tomorrow. So the more tests we do, the better off we are.”

DTC Chairwoman Eloisa Melendez volunteered that she gets tested every week because she might be asymptomatic and it’s free at the Day Street Community Health Center.

Stopping the spread is “about people doing the right thing,” Rilling said. “We have to be responsible and make sure that when you go out, if you go out and wear a mask, you shouldn’t be going out unless you have to.”

He said, “These are the highest numbers we’ve seen since last April or May. And just as the medical professionals predicted, we are seeing a spike. And it may be worse than the first wave, which to me, and it should be to everybody and very unsettling and very frightening to imagine that we could be worse off than we were in April or May.”

CONSISTENCY. This is what is lacking during Covid. Close the schools but “strongly discourage trick or treating” 🤷🏻‍♂️ Just take a stand on telling people to stay home. It’s like the Mayor in Jaws telling everyone to come swimming while a shark is swimming around in the water…

“You shouldn’t be going out unless you have to,” Rilling said.

So, we still have students ands teachers going to school each day? And I would imagine that teachers would still have to report to empty buildings to “teach” all day, rather than staying home an staying safe?

Harry- which is it?

Make testing easier. No one should have to wait in line and outside down at Day Street. Total mess this am. If you want to stop the spread get the testing centers up and running easily for people Encourage people to stop by in their work day to get tested. I should take five minutes. It should be easy and it should feel safe for people. Not long lines and long wait times. Closing schools is not right. We need to keep schools open and make testing easier.

Funny, I saw him driving his City car over the weekend! Hmmm.

Why is the Mayor allowing Trick or Treating? WTF! Makes no sense.

It’s really not up to the mayor to “allow” trick or treating. It’s not a City sponsored event. Is he declaring a City wide emergency and curfew, that’s the only way you keep people home legally. It’s not illegal to walk the streets and knock on people’s doors, as long as you’re not soliciting services. I think it can be done safely but the fact that people think the Mayor dictates Halloween is scary (get it, lol).

This is all political science right now. Everyone is working except for Government and those businesses government says can’t, while government gets paid 100% for doing half the job. This society will collapse if this continues.