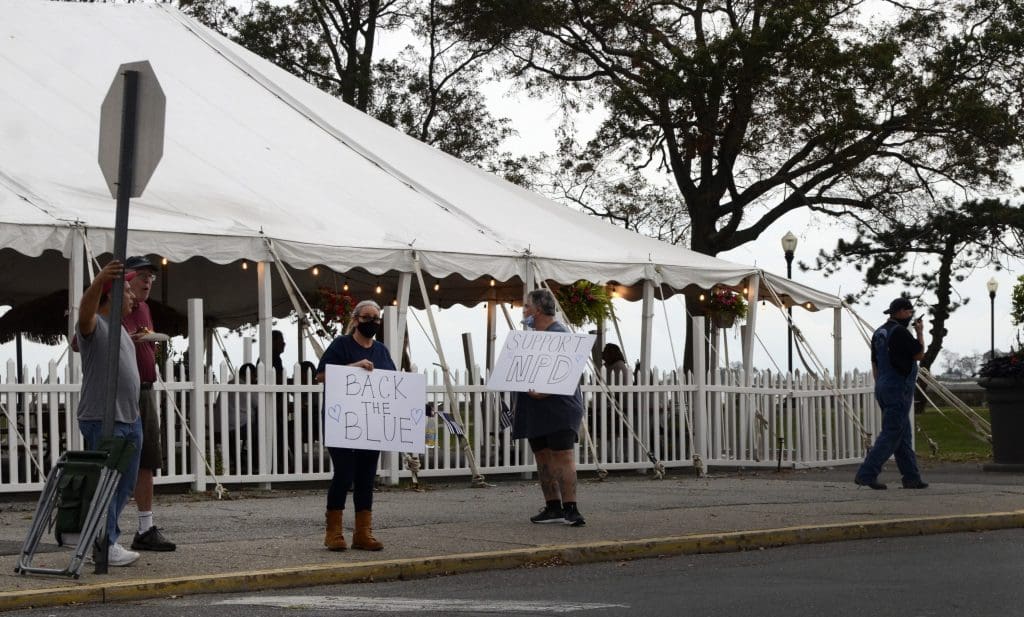 NORWALK, Conn. — Some Norwalk Republicans say that Mayor Harry Rilling and State Senate Majority Leader Bob Duff (D-25) tried to stop their “Back the Blue” event last week, and they held it anyway.

“There would be absolutely no reason I would ever cancel an event that was designed to support our police officers,” said Rilling, former Norwalk Police Chief.

Duff didn’t respond to an email inquiry from NancyOnNorwalk.

“Harry and Duff forced the cancellation of Back the Blue at Ripka’s. This is Duff payback. This is not a riot. It’s a peaceful protest for our NPD,” former Republican Town Committee Chairman Victor Cavallo said Wednesday on Facebook. “I’m going anyway. Join me.”

Duff recently accused Norwalk Police officers of mistreating him during a July 24 visit to police headquarters to discuss a police accountability bill.

Back the Blue was scheduled for 6 p.m. Thursday, and arranged by Accurate Auto. 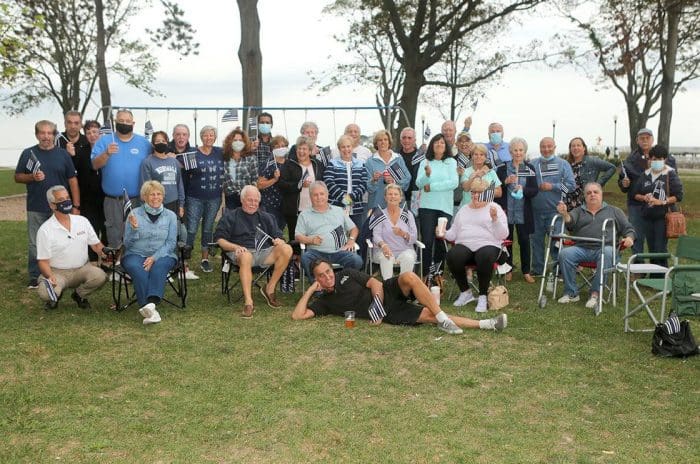 “There were rumors that Bob Duff brought pressure to bear on the Mayor to have the police issue a warning to the restaurant and the organizers of Back the Blue about running afoul of the Governor’s protocols concerning large gatherings of people; gatherings of more than 100,” Cavallo said in an email. “It was an agglomeration of state and municipal subtle threats that attempted to discourage people from turning out to honor and support the Norwalk Police Department who face some very ugly and politically motivated challenges to their profession as a result of Bob Duff’s ‘accountability’ bill, as well as his recent efforts to purposefully defame their character.”

Rilling said he was unaware of the event until Norwalk Police Chief Thomas Kulhawik brought it up at a routine weekly meeting concerning reopening.

“With this being declared an ‘event’ sponsored by Vinnie sciccatano (Accurate Auto) I was ‘reminded’ that any event exceeding 100 people I would (not Vinnie) be subject to a fine  of $500.

“The city, of course being my landlord, was another factor. If I had been ‘reminded’ of the fines it certainly was a sign that it would be under scrutiny and I could not have my name associated with covid restriction violations.

“My feeling that it would exceed that and I need not be in the middle so I {rescinded} my offer to use our venue for his paid event. That which included a band being paid for by Vinnie as well.

“I was open for business as usual and as it turned out many people came down and just hung around.

It was Kulhawik who “reminded” him, Ripka said.

“During our normal city meeting, we discussed a number of upcoming events and the number of people that would be attending.  We were made aware of the event scheduled for the beach and as we have done with a number of events, we reached out to the organizer who we thought was Ripkas to find out more about the event and crowd size.  During the discussion we advised him that the Governors Order limits the number to 100, and based upon concerns that it may exceed that number my understanding is he spoke to the actual organizer and they decided to cancel the event to avoid any issues related to a violation of the order.”

Hopefully this will be consistent and Chief Kulhawik will “remind” anyone else holding an even over 100 people of the fines. Seems like we have had some other protests and “vigils” where more than 100 could show up.

How unfortunate to put Clyde (Ripka’s) in that position, yet Convenient for others to be let off the hook.. My question would be what would the difference be for a wedding of say 100 people under the tent and 100 people on the beach be? Doesn’t that happened on a regular basis?

One look at the picture and you see that masks are not worn by all. Rilling said see something say something. Hopefully the people in picture will be fined by the NPD for not waring a mask..

How many turned out for the vigil for the late Supreme Court Justice? See, there are times that a group can be tolerated and behave under these conditions; the police need to see how many support them. The elected folks can’t pick and choose what gatherings are acceptable, and this would have been a good time for the mayor to show that he has the backs of the officers instead of keeping quiet and leaving them to defend themselves anytime an accusation is thrown at a police officer nation wide.

@Ronmorris. Masks were worn and removed for the picture

Patricia
Key word “removed”
I also have seen other pictures with people at the event with no masks.I will be forwarding those to Rilling to see if he going to take the proper action. Actually in one of the pictures the person without a mask is a cop. Hopefully he will also be fined. Its called leading by example. Sad when an event for law enforcement is seen with people breaking the law as in no masks.

M Murray
Do you feel that if a cop was observed without a mask at the event that he should be fined like a taxpayer would?

I don’t believe any taxpayer should be fined for not wearing a mask.

I can’t imagine anybody has been fined for failing to wear a mask. Forward away Ron. I’m sure the Chief has nothing better to do with his time.