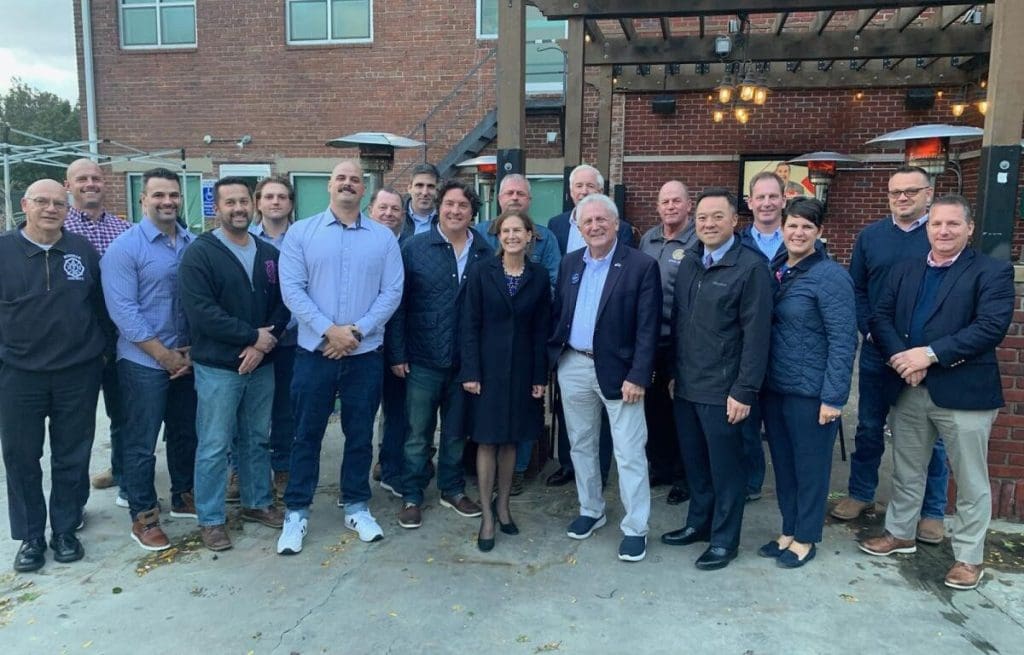 Mayor Harry Rilling, fourth from right, at a Wednesday night gathering at O’Neil’s to mark his endorsement by the police and fire unions. (Contributed)

NORWALK, Conn. — Mayor Harry Rilling has received the endorsement of both the police and firefighters unions in his drive for reelection.

“Mayor Rilling has always made sure first responders have the resources they need to be there for the people of Norwalk. He has kept his door open, and works extremely hard for the people of our city. Mayor Rilling has our full support because he puts public safety first, and has the experience to understand our needs,” Fire Union President Billy Ireland is quoted as saying in a news release.

Rilling, a Democrat, is seeking a fifth two-year term. He is being challenged by Republican candidate Jonathan Riddle.

Riddle said the endorsement comes as no surprise, “given that Harry is a former police officer.”

“We endorsed Harry because he continues to make smart decisions about public safety,” Lt. David O’Connor, President of the Norwalk Police Union, explained in the news release. “His record of success in crime reduction in every neighborhood of Norwalk is directly related to his leadership on strategic investment in public safety. As crises have emerged, whether it be opioids or the Covid-19 pandemic, Harry has given us the tools to take care of our community.”

“I don’t believe the views throughout the department reflect the views of those that made the endorsement,” Riddle wrote. “I disagree with David O’Connor’s assessment of Harry’s decisions about public safety. In the 8 years Harry has been mayor, the police department has had minimal funding increases and barely any growth of its rank and file to meet the needs of the city.”

He said, “The same goes for the fire department. I’ve personally spoken with many firemen who are upset with the last 8 years under Harry. Fire houses are in disrepair, needing renovations, and the department is starved for new firemen to meet the huge increases of calls they are responding to. As density increases exponentially, I fear for the safety of Norwalk as resources are stretched thin to meet the ever-increasing calls for help.”

He continued, “Harry has not delivered the resources both departments desperately need, as indicated in the recent reports by The Hour. As mayor it will be my priority to increase the size of these departments and provide the resources to always meet the needs of our service men and women responsible for our safety.”

The police union met with both candidates last month, O’Connor said to NancyOnNorwalk.

“The bottom line is that John Riddle – nice guy, real nice guy – has no understanding how the levers of politics in the city of Norwalk works,” O’Connor said.

He alleged that Riddle said he’d “fund the police department by taking money away from the Board of Ed” and called that “just idiocy.”

“The community would never sign up to it. It would be it would be just a pie in the sky idea,” O’Connor said.

“That is completely and factually incorrect. First of all, it is against state law to reduce Board of Education Funding, there is a mandatory increase each year,” Riddle wrote.

He said his prepared statement was, “Next to Education, which is a minefield of a budgetary mess, public safety should be the main focus of increased funding next budget cycle.”

Riddle said, “I was asked how I would fund increases in Public Safety, I answered, ‘By cutting wasteful spending and prudently managing our tax dollars in a fiduciary manner.’ First, it will not come from raising property taxes. Within the budget, I noticed glaring wasteful spending in numerous areas and large increases for certain line items completely ignoring this department’s needs.”

O’Connor spoke of the staffing shortages and said, “They are actively recruiting.”

As for Riddle, he said, “The notion of growing the police department is a great idea. We fully support it, but it’s very expensive proposal. And you know, you can’t say you’re not going to raise taxes at the same time you’re increasing the department by millions of dollars per year. It’s just not going to work. The math just doesn’t crunch.”

Again, Riddle is a very nice guy, good to talk to, but, “He didn’t have an idea of how he was going to accomplish what he wanted to do and where the money was going to come from, and how it was going to interface with the police department in any way, shape or form,” O’Connor said.

In the news release, Rilling is quoted as saying, “Our police and firefighters work extremely hard and care a great deal about our community and residents. Crime is down citywide, and we continue to have some of the best and most community-minded firefighters and police officers in the region. I personally know how hard the men and women in the police and fire departments work every day and I am honored to have their continued support.”

Isn’t there a conflict of interest when the person who will lead a future contract negotiation receives the endorsement of the opposing side in those negotiations? It’s a bit disconcerting that these types of endorsements have been going on since the beginning of time yet no one calls attention to it.

This endorsement article is always comical. Just an opportunity to get your picture in the paper. We have added thousands of apartments in Norwalk and not one extra firemen or policeman. Cranbury/Route 7 side of town still has no firehouse. Wasnt it Harry Rillings administration that took away the points on the exam to the local Norwalk people. I remember when Dick Moccia ran we put a jacket on him and said he was the best since slice bread. Then Harry won now he is. The police force is at its lowest numbers and they endorse the mayor. Surprising. I will definitely vote for Harry because the police and fire say I should. LOL

I entirely agree with @Skip and @Tysen. Also to the men and women of the police department, did the mayor have your back when Duff attacked you with the spitting claims. No he didn’t.
When Duff and his colleagues in Hartford stripped away your immunity rights did the mayor have your back. No he didn’t.
And speaking of a mayor knowing how to pull political levers. Isn’t eight years on the job enough to learn the ropes in this state. How about a mayor that stands up to Duff, Lamont, Himes, and our U.S. senators and their policies that are costing Norwalk taxpayers millions especially with their sanctuary city policies. How about a mayor that actually goes up to Hartford and fights for more funding and gets it.
And lastly, if Norwalk is such a big draw as the mayor claims in every other sentence. How come he needs so many out of town developers on his donor list
and massive tax incentives to entice the building of more apartments?

How many of the Police and Fire Departments live in Norwalk and what might their impact on the election be?

Think carefully when you vote.

Let’s move forward… 8 years is long enough to sit in the saddle. Time to give up the reins….

Get Rilling out, do it Tuesday Norwalk.