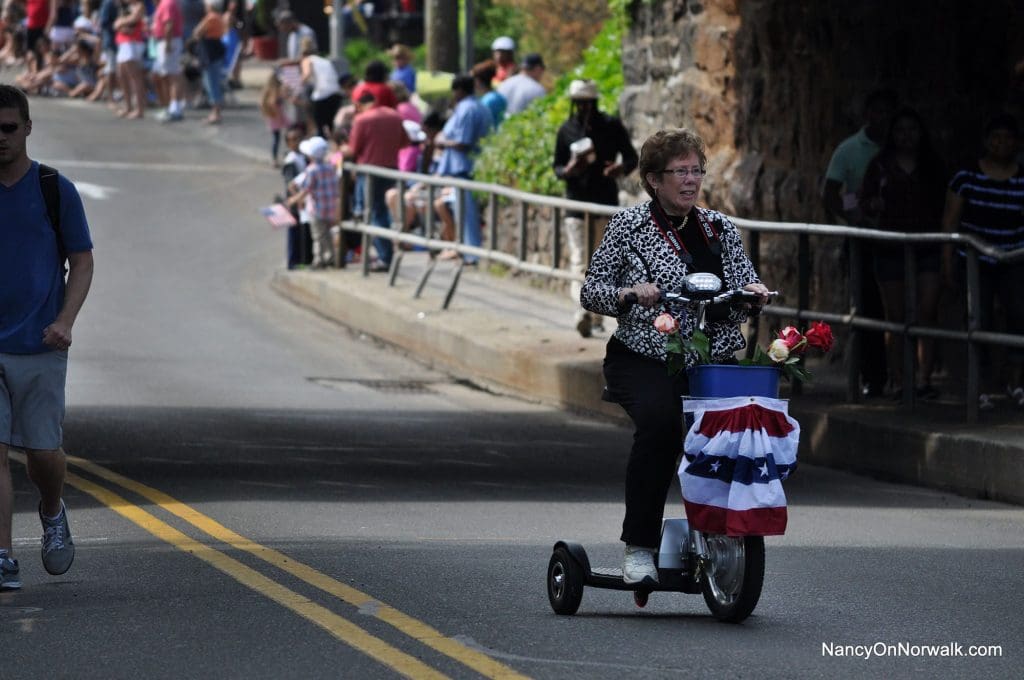 NORWALK, Conn. — Embattled Norwalk Republican Registrar Karen Doyle Lyons will be out of her position in less than three weeks, according to Mayor Harry Rilling.

The registrar is under fire for a Facebook comment she maintains has been taken out of context. She called Rilling’s action a “very vindictive” personal attack.

Doyle Lyons’ initial Facebook comment, made June 22, was “No more Black History Month because many of us know more then many Blacks.” She complains that many people are leaving out her follow-up explanation, “I am just saying study, learn not just one month but all year. I do and so should many others.”

Black history should be taught year-round, she said. 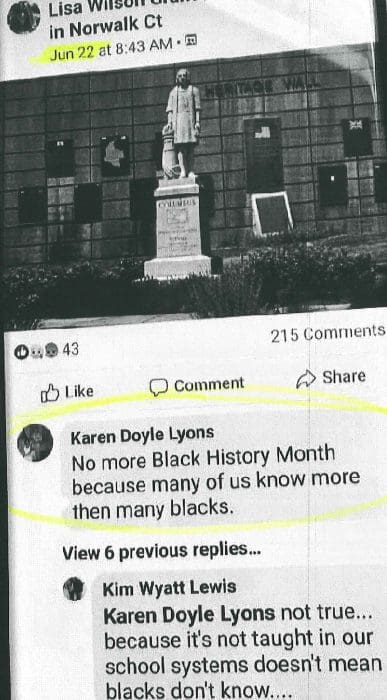 A screenshot provided to NancyOnNorwalk.

Doyle Lyons on Sunday called the letter “a draft” done in response to bullying and threats. Dickens said there was “nothing of the sort.”

“I was not the only one that was speaking with her regards the situation: no bullying, no threats,” he wrote.

Rilling on Wednesday said, “Karen Doyle Lyons’ employment with the City of Norwalk will terminate on July 20, 2020. We are processing her retirement documents in accordance with the formal notice of retirement she submitted on June 25, 2020 to the Personnel Department.”

Doyle Lyons said there is no signed letter of resignation.

She asked the Human Resources Department to tell her what her buyouts would be for July, September and March, she said. “I don’t know what the Mayor is talking about.”

“These verbal attacks on me are because he doesn’t like me personally,” she said. “My position has always been to uphold the integrity of elections, and I will do so to the best of my ability.”

Although Doyle Lyons focused on Rilling, many Republicans have joined with Democrats to express outrage and demand that Doyle Lyons end her 20-year career as Republican Registrar. Dickens called her Facebook comment “not something that Republicans and, in particular, this RTC can ever accept or stand for.” Republican State Central Committee member Kelly Straniti called the remarks “inexcusable” and former State Rep. Fred Wilms (R-142) said they were “hurtful, divisive and completely unacceptable.”

Doyle Lyons has lost the public trust and, “She has no choice but to follow through with her previous resignation,” Wilms said Tuesday.

“My stance still is ‘I’m not retiring. I’m not resigning and I’m not withdrawing.’” Doyle Lyons said Wednesday, asserting that she’s gotten calls of support from “all over” and “it’s been an uplifting process even though it’s bothersome.”

Good job Harry. The resignation paperwork has been there for a week. Glad the city finally decided to process it! Karen is lucky that she is able to walk away from this with any pension…

Second chances, delayed adjudication, other government jobs, and legal settlements are for some and not others.

Like her or not everyone has to agree Karen has a heckuva lot of spunk. I still believe she needs to resign, but I give her credit for having the fight go 15 rounds. Maybe she could make it interesting by throwing some dirt of her own on political rivals
Today’s American hero shout out came to mind while listening to Frank Sinatra’s “Fly Me to the Moon” last night. You may not have heard of Joe Acaba, but you should have! First Puerto Rican astronaut, and someone we’ve all looked up to at one time or another. Thanks Joe for helping us dream one day of “seeing what spring is like on Jupiter and Mars”…

It’s time for KDL to do the right thing and for the betterment of the party and healing process to begin. A resignation is what needs to happen immediately. Thank You for your service but unfortunately it’s time to go.

When and where did she offer the “follow-up explanation”?

He’s setting the city up for a loser of a lawsuit. Stand up and do something real rather than playing email games or we will still have her after November, Harry. You retire her in July…she sues and wins and is reseated when she wins the election you can’t get her out of

Harry going next. Lots of things he did will now be let known

Fire all racists. Take your pension KAREN, and go.

I witness the attacks on Karen at Columbus. Who is next? Without Karen no election law would have been upheld. Wait till the signs appear this time at Columbus. Will the Police demand the Republican signs be taken down after their budget is cut? Will they change the name of the school to President Trump? Will they change the name of Yale? Will they threaten us again for having a sign with the President’s name? The Dems have a candidate that is the worst they have ever had.