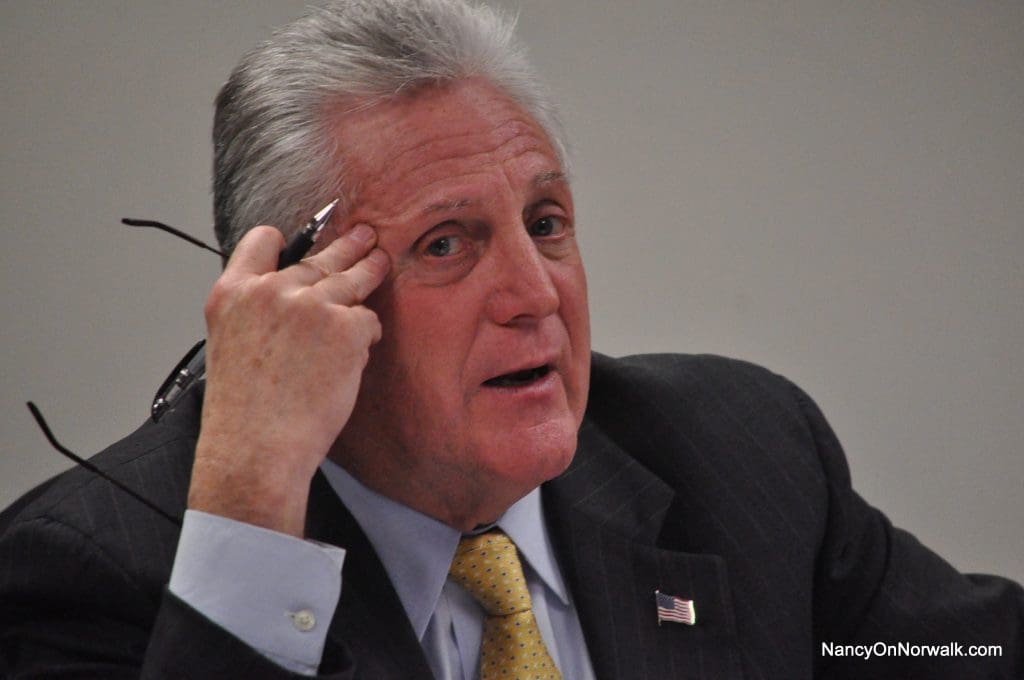 NORWALK, Conn. – A new master plan for the Webster Street lot is only part of the focus for Norwalk redevelopment, Mayor Harry Rilling said.

“Toward the end of this month I am having a meeting with Pullman and Comley, (a law firm) who are going to discuss with us advancing options, some of the things that we can do in the Wall Street area to spur development because that area is totally in need of attention,” Rilling said. “We have Head of the Harbor South; I know a lot of people are doubting that POKO will go ahead but we have been cautiously optimistic that things are going to move forward. Within the next couple of weeks we expect to see some movement there.”

“As the agency is advancing projects into construction, bringing others to conclusion, we think that it is important for the agency to turn its attention once again back to the Webster Street lot as a site for potential redevelopment activity,” Redevelopment Agency Executive Director Tim Sheehan said.

Any redevelopment would have to maintain the parking that is critical to SoNo, but there is likely a better way to use that land, he said.

“The 2004 master plan that was done I think still has very, very good bones about it, but at the end of the day there has been a lot that has changed in terms of the development activity, the economics of the development surrounding the project,” Sheehan said. “All of those issues ultimately need to be reconsidered and be brought back forward, as well as the pricing relative to structured parking which has come down significantly since the last time we looked at this. So we are hopeful that at the end of the day we can put forward a master plan that can get into a request for qualifications from developers to ultimately bring forward development concepts that would be in-line with the master plan that would be approved by both the Redevelopment Agency and the city.”

The next step will be to line up potential consultants and run them by the Agency’s commissioners, Sheehan said. That process usually takes 60 days, and then it would likely take six months for the study to be done. Approval would be done jointly with the Common Council Planning Committee, he said.

Rilling asked if it would be more practical to use the same consultant that made the original plan. Sheehan said the principal consultant is deceased, and other members of the team are not available.

The Webster Street lot plan “never moved forward, so now we are looking to make sure that plan works in today’s economy and works with what we are trying to do in Norwalk,” Rilling said.

While the recently approved Head of the Harbor South appears to be moving ahead, POKO Partners’ Wall Street Place is overdue. Common Council members recently announced that POKO is in default of its Land Disposition Agreement with Norwalk because it didn’t have a commitment from Citibank for its construction loan by the 90 day deadline written into the revised LDA.

Sheehan said Friday that he has had several conversations with Citibank.

“They are progressing forward and they anticipate that, over the course of the next few weeks ,they will be coming to conclusion with regards to the construction financing,” Sheehan said.

To clarify, Sheehan said, “The bank is still waiting on an ‘as built’ appraisal, so there’s still some due diligence issues that remain on the bank side of the ledger to complete. Assuming those come back in line with what the underwriting has borne out, I would feel fairly optimistic.”

If that comes through he would expect POKO to begin work on the foundation fairly quickly, he said.

“Everything seems to be moving nicely but we want to make sure that we do everything possible to encourage development,” Rilling said. “I am talking to Mike McGuire, talking to the Wall Street Task Force, looking at some of the options that we have available to us and we will be coming out with an announcement.”

There’s a clue in the recommended 2015-16 operating budget book; one goal for the mayor’s office in 2015-16 is, “Examine the feasibility of establishing a Tax Increment Financing District to promote development in Norwalk’s urban core.”

Asked if that was possible, Rilling said, “perhaps.”

“That’s one of the options we want to explore. We think it’s a great option and there’s recently been some legislation at the state level that perhaps could make it a little bit easier to implement a TIF district,” Rilling said.

“Tax increment financing (TIF) is an alluring tool that allows municipalities to promote economic development by earmarking property tax revenue from increases in assessed values within a designated TIF district,” Richard Dye and David Merriman write in an article on the Lincoln Institute of Land Policy website.

“The rules for tax increment financing, and even its name, vary across the 48 states in which the practice is authorized,” they wrote in 2006. “The designation usually requires a finding that an area is ‘blighted’ or ‘underdeveloped’ and that development would not take place ‘but for the public expenditure or subsidy.’ … TIF expenditures are often debt financed in anticipation of future tax revenues. The practice dates to California in 1952, where it started as an innovative way of raising local matching funds for federal grants. TIF became increasingly popular in the 1980s and 1990s, when there were declines in subsidies for local economic development from federal grants, state grants, and federal tax subsidies (especially industrial development bonds). In many cases TIF is ‘the only game in town’ for financing local economic development.”

McGuire is a member of the Wall Street Task Force.

“Regarding Mayor Rilling’s comments, I’m cautiously optimistic as well in the short run and very optimistic in the long run for the Wall/Main area,” McGuire wrote in a Friday email. “As the last ‘undone’ area on the I-95 corridor outside of Bridgeport, I think it’s inevitable that significant re-development far beyond POKO and Head of the Harbor will come here. The reason is pricing for both lease and purchase. The value of real estate here is so low relative to surrounding areas that developers with vision can and will change the course of Wall/Main.

“People may doubt this, and with good reason given the history,” McGuire said. “However, the difference this time is that everywhere else (Westport Ave, Connecticut Ave, SoNo, 95/7, Merritt 7, Stamford South End, downtown Westport, downtown Darien, etc.) has been done and/or largely completed or planned. There really are no other areas to revitalize and none that have all the positive attributes of Wall/Main.”

“The Norwalk Center Task Force is pleased with the responsiveness and leadership Mayor Rilling and his staff have demonstrated,” Task Force Chairwoman Jackie Lightfield said. “We look forward to working with the mayor to advance our goals of revitalizing the downtown through strategic investments and partnerships.”

This is very very positive news. Took a look again at the Webster Block Planning document, and lots of still valid ideas and concepts. Also, shows that the parallel discussion with moving Wash Vill housing there is short sighted. I hope that the city moves efficiently to get this study updated, community input, and then get it out to developers for potential ideas!

Also, as always, thanks go to the Mr. McGuire, Ms. Lightfield, and the Wall Street Task Force for their continued hard work and advocacy for the area.

Just like to proudly announce that the good folks at Patriot National Bank have closed on our construction loan, and the beginning of redevelopment for the Wall Street Theater is just around the corner. thanks for all your support and we look forward to being a catalyst for the area’s renaissance