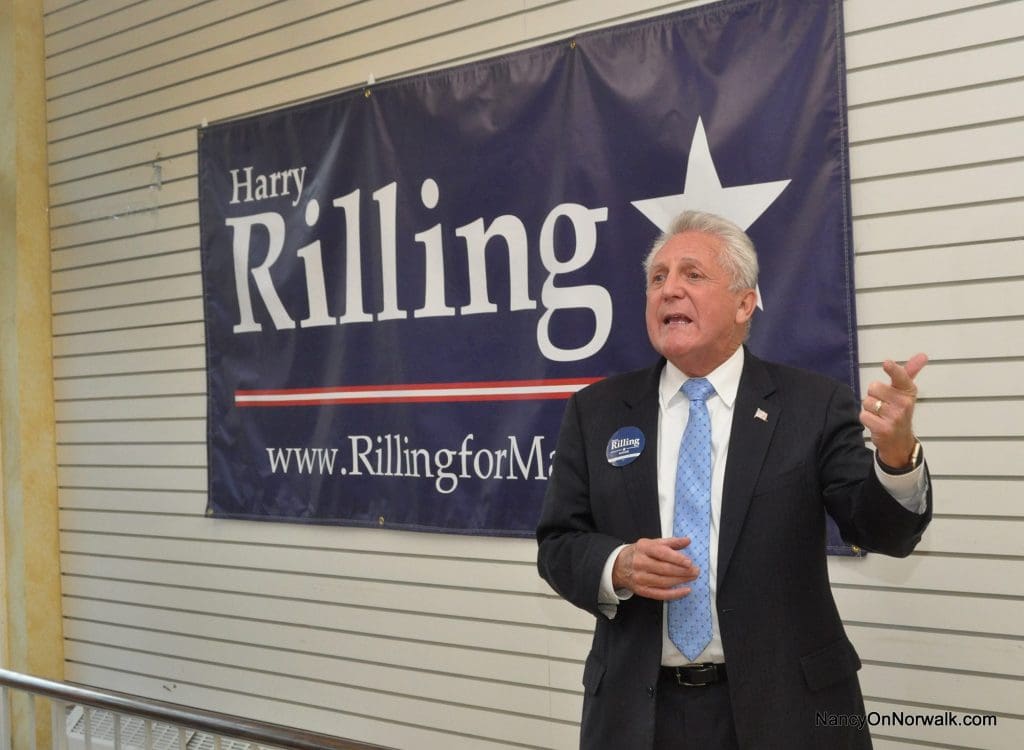 “Norwalk Mayor Harry W. Rilling announced today that he plans to seek a fifth term as Mayor. Mayor Rilling was first elected to office in 2013, and under his leadership, Norwalk has grown its tax base, revitalized its downtowns, and elevated its public schools into the state’s top performing city district,” the press release said.

Rilling’s reelection bid is no surprise to NancyOnNorwalk readers but the press release detailed “five overarching priorities” for the Democrat who has fought off contentious challenges from an unaffiliated activist in the last two election cycles. It also included endorsements from U.S. Sen. Richard Blumenthal (D-Conn.) and U.S. Rep. Jim Himes (D-Greenwich).

The Common Council set a budget cap Tuesday evening that is $1 million lower than recommended by Norwalk Chief Financial Officer Henry Dachowitz. Rilling’s only announced opponent, Common Council member John Kydes (D-District C) led the charge; Kydes introduced the amendment to the motion for a $400 million appropriations cap, which then passed on a 10-5 vote, after which, Rilling offered supportive words.

“I think we’re really acting in the good interest of the city and the taxpayers,” he said.

Kydes formed an exploratory committee for a Mayoral run in December. His fundraising total is far behind Rilling’s; as of late-January, he could confirm $4,000 in the coffer while the Rilling campaign spokesman Adam Wood said the Mayor had raised more than $60,000.

“The positive feedback and donations that I have received since starting my exploratory committee has been overwhelmingly successful,” Kydes said Tuesday in an email. “I plan to make my announcement on if I will be running for Mayor this year in the coming months. My focus right now is to continue with my public outreach campaign and fundraising efforts. The Mayor informed me of his announcement so it did not come as a surprise or impact my plans. We have agreed to continue working together and keep the politics from interfering with city business.  With the grip of the pandemic still being so strong we both understand that Norwalk must be the top priority right now. I am looking forward to what the coming months will bring. There is no doubt that there will be trying times ahead, but I am up for the challenge.”

The Rilling campaign announcement cited “thoughtful and steady leadership” that’s been “evident throughout the COVID-19 pandemic.”

“Over the course of the public health crisis, which continues today, Mayor Rilling has made tough decisions, implemented new rules and regulations, and expanded resources to public safety and public health personnel to help keep residents safe,” it said.

“I have never been more honored to be your Mayor than I have been over this past year,” Rilling is quoted as saying. “The COVID-19 pandemic showed the Norwalk community’s true spirit, with friends helping friends and neighbors helping neighbors. We looked out for one another and we continue to take care of loved ones and complete strangers months into this pandemic.”

He continued, “We all know there are disparities in our community, and COVID-19 has shined a bright light on these inequities. I have been blown away by the support our residents and businesses have shown those who needed a helping hand. I firmly believe the City can and should do more, and addressing these challenges remains a top priority for my administration.”

The “five overarching priorities” listed in the release:

“ECONOMY and the road back from COVID-19

“EDUCATION and a path toward success

“EQUITY and justice for all

Norwalk Republican Town Committee Chairman Carl Dickens did not reply to an afternoon email asking for a response.

Lisa Brinton, an unaffliated voter, ran for Mayor as part of a four-candidate scrum in 2017 and in 2019, won a Republican endorsement for the post. Rilling won that contest with 55.5% of the vote, the same percentage he got in 2017, with Brinton achieving 44.5% support. She maintains that she gained voters as Rilling had a Democratic opponent in 2017, who garnered 6% of the vote.

Brinton has formed a Political Action Committee and last week issued a letter to the editor promoting the PAC, asking residents to “vote FOR Norwalk” come November.

She didn’t respond to a Tuesday email from NancyOnNorwalk, asking if she planned to run for Mayor again or to form a third party.

“Mayor Rilling continues to have strong support from the local community, having raised more than $60,000 to date for his re-election effort,” the Rilling press release said. “Donations have come from carpenters, firefighters, ironworkers, laborers, Democrats and Republicans. The majority of the contributors were from Norwalk and surrounding towns, with about 80% of contributions $250 or less. Members of the state’s Federal Delegation have also offered their support to Mayor Rilling.”

Kydes said the maximum donation for an exploratory committee is $375 per individual. For a Mayoral campaign, it’s $1,000. Rilling had 15 maximum donations as of Dec. 31, according to campaign documents filed with the Town Clerk’s Office.

Rilling’s press release quotes Blumenthal as saying, “Harry Rilling has led Norwalk through health and economic crises with thoughtful leadership and integrity. He has forged community partnerships to help residents and businesses, guiding Norwalk to a stronger future.” Said Himes: “Mayor Harry Rilling is a good friend and a leader of tremendous empathy and integrity. He cares deeply for the Norwalk community. His thoughtful leadership throughout the COVID-19 pandemic defines grace under pressure. Harry will continue to bring jobs, revitalization and exemplary public education to Norwalk. I’m proud to endorse his re-election.”

“We have accomplished a lot over the last several years, but the job is not complete. I remain fully committed to funding new and existing programs to help residents and businesses in need. I am steadfast in my belief that government is good, is effective, and is here to help,” Rilling is quoted as saying. “I will always stand up for our residents, not for special interest groups or political parties. I will always make the tough call, not the politically expedient choice. I will always believe that diversity is a strength, not a weakness. I will always fight to make sure Norwalk remains a safe, affordable, and vibrant place for all people, not just a select few. I am proud and honored to be the Mayor of our great city, and I promise to keep our momentum going.”

I wonder when his campaign decided to drop Bob Duff from the campaign materials? Was it when he created the kerfuffle with the local PD, that exposed him for Roger Clemet’s like mis-remembering? Or was it his recent bad-comedy bit where he insulted a good cross section of his constituents for their feelings about vaccines – which might be better addressed with information. Or was it when he painted the entire town into a financial corner by shoehorning his vanity project Bob Duff high school to the front of the school priorities list – all by himself – which then lead to this year’s disappointing capital budget cuts?

Duff is on a wrong-way roll – and Harry apparently thinks – maybe he should sit this one out. Norwalk taxpayers should remember – these two are codependent.