Scenes from Tuesday’s Common Council meeting. Real estate broker Jason Milligan recently turned down a settlement offer in the lawsuit filed against him by the City and the Norwalk Redevelopment Agency. He’s been seeking publicity for a counter offer. The City offered to drop its lawsuit for $4.5 million. Milligan would settle the suit by selling the City the former Leonard Street municipal parking lot without making a profit.

Milligan attempted to speak about the City’s legal department during Tuesday’s Common Council meeting under the guise that “Corporation Counsel” was on the agenda, though it was listed simply as a heading with no items for the Council to discuss or vote on. Rilling ruled Milligan “out of order” and said he’d call security if Milligan didn’t sit down, but then gave Milligan, who is embroiled in multiple lawsuits with the City, three minutes to speak about the cannabis ordinance up for a vote.

Milligan didn’t say anything about cannabis but instead complained that he’d been interrupted and couldn’t put his thoughts together. A recess was called and when the meeting resumed, Milligan attempted again to press his freedom of speech issues. He eventually relented and allowed the next speaker to take the lectern.

Mr. Milligan’s behavior at the Common Council meeting last night was disruptive and inappropriate.  Mr. Milligan repeatedly attempted to speak to a topic not on the agenda, despite numerous reminders that the Council Rules and Connecticut Freedom of Information laws limit discussion to matters properly noticed on publicly posted meeting agendas.  Mr. Milligan received multiple requests to adhere to topics on the agenda, but refused to do so and continued to try to make statements regarding topics that were not on the agenda.  Eventually, the Council was forced to take a recess and adjourn the meeting for a period of time. When the meeting resumed after the delay caused by Mr. Milligan, Mr. Milligan remained at the podium and refused to cede the floor to other members of the public who wished to address the Council on matters that were on the publicly noticed agenda. Security eventually lead Mr. Milligan back to his seat.

Over many years, Mr. Milligan has exhibited a pattern of behavior which suggests that he believes that the City’s rules and regulations should not apply to him.  He has repeatedly violated State law and city regulations related to permitting, including demolition and electrical work, which endangered workers, neighboring residents and the public.

He prevented one of his tenants who operated a bakery from opening for over a year by refusing to follow clear regulations that everyone else in the neighborhood follows.  Rather than comply with the regulations, Mr. Milligan attempted to organize protests and orchestrate a PR campaign against the City and Redevelopment Agency.  After wasting everyone’s time and needlessly delaying the baker from opening, Mr. Milligan eventually complied with the regulations by submitting the required paperwork.

We are currently engaged in a lengthy legal battle with Mr. Milligan for his clear violations of contract provisions which benefit the public.  To the detriment of taxpayers, Mr. Milligan has argued these provisions should not apply to him.

Last night’s latest stunt is just another example of Mr. Milligan’s contempt for rules, procedure and the law.

Rilling also told NancyOnNorwalk  that he did call a security guard, who asked Milligan to sit down as the meeting continued.

Council member Bryan Meek (R-District D) said Milligan was removed from Council Chambers and then reappeared in his seat some time later.

He wrote, “I went in there calmly with pure intentions. I was interrupted immediately and constantly. It took over 15 minutes for their arguing and recess. If they gave me 3 minutes I would have calmly stated my opinions and then sat down. People ramble on aimlessly all of the time. I would have stayed on point. There were only 4 people there.”

NancyOnNorwalk asked what the point would have been.

“I never got to make my point,” he replied Wednesday morning.

Asked again what his point would have been, he replied, “I will be working on something in the coming days that will articulate a larger point that should be made. It is hard to find time to write when I am so busy buying and improving real estate.” 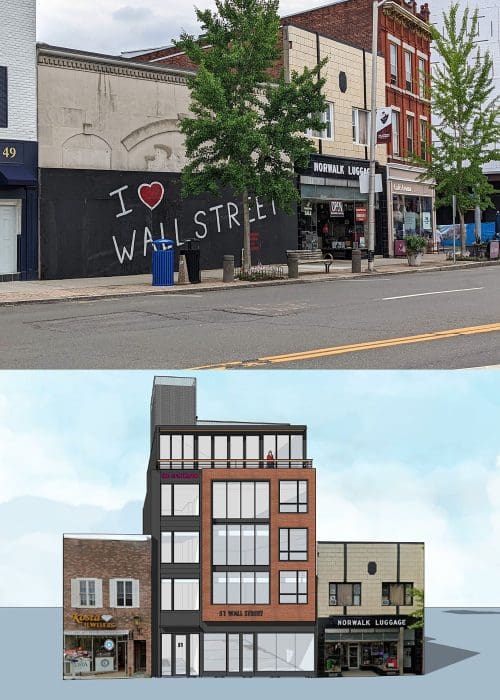 At top, the former David Harvey Jeweler’s building, bought by Jason Milligan nearly two years ago. At bottom, an artists rendering of his plan for the property, showing him at top. It’s “difficult to get approved because of the complicated regulations,” he said. “I will either do a scaled back project, wait for the new zoning regulations.”

Milligan, who owns about 40 properties in the Wall Street area, has paid for many murals to brighten the area. His new tenants include a bubble tea merchant, a thrift shop and an Ecuadorian bakery in the former My Three Sons building and a smoothie purveyor down the street. He spoke of building a hotel over My Three Sons but Planning and Zoning denied the plan as not in compliance with parking requirements. His plans for David Harvey Jewelers have not come to fruition.

Asked again Wednesday afternoon what his point would have been Tuesday, within the three minutes citizens are given to speak, he said, “Stay tuned. It will take me a few days to articulate it in writing. I am sitting through an all day deposition of one of the City’s expert witnesses. When I can carve out some time I will write out my point in a thoughtful way.”

He would not say if his point involved cannabis. Asked this via email, he replied:

“Mr. Milligan Do you want to talk about Marijuana…

You have 3 minutes to talk about Marijuana…

Are you going to talk about Marijuana?…

During Tuesday’s meeting, Council President Tom Livingston (D-District E) said, “As members of the Council know, it has  always been the practice not to discuss ongoing litigation in an open forum. Doing so could have a significant adverse prejudicial effects on the City’s ability to resolve matters on terms favorable to the city and its residents.”

The town could save a lot of money by getting rid of the redevelopment agency and simply hiring Milligan to run all operations on Wall Street on the city contract and give his company the leeway that redeveloped an agency and most other real estate companies have been given. And we have a much nicer community I don’t think the town cares about the taxpayers we construction in South Norwalk with all the highly questionable deals on affordable housing which has yet to come ve reality when you take section 8 into account. However they needed to take hatch and Bailey away instead of putting a school right instead we need a bunch of apartments that was clean open space next to every service that kids could possibly need. There was also warehouse space on Woodward that could have been approached for a school with a sports field already there

Harry, Harry Harry. Please. You were “triggered” by Jason, and you exposed your bully nature for all of Norwalk to see. Must be the acting executive (King) who pushed for this PR piece. Yet every time Harry opens his mouth, someone has to remove a shoe.

I know the calculus is – low information voters, and 24hrs news cycle. Sorry – some of us have memories.

It was May 18th – 2018, when a local provocateur (the one who followed Jason at the podium) sent a FOI request to city officials (NoN was copied – and was a recipient of the details, too) – asking for relevant correspondence about this POKO development

The bombshell that was uncovered – came care of the Norwalk Redevelopments head at the time – Tim Sheehan – who had to provide an email document that spelled out – the direct link between the Malloy administration and the JHM / John McClutchy business. The upshot was – McClutchy was chosen as the preferred developer specifically because of the “special relationship” he enjoyed with Malloy – which it turns out – was related to their significant annual contributions to the Central Democratic Campaign Committee. They have been playing the game for years – see the 2016 CT post article about the shenanigans around the Stamford Train Station. And lo and behold – the treasurer of the CDCC at the time of Tim’s email was none other than Eloisa Melendez – the current head of the Norwalk DTC, and funny enough – Ned Lamonts treasurer. Fish on the docks for three days don’t smell this bad. And it does a Deja Vous with the Kostas Diamontis schools scandal.

If NoN history is still retained – that article exists out in the internet archives.

So Harry, I would be very careful trying to steal the high moral position here. Someone might actually present to the public the entire, lengthy and sordid history of this development. In fact, I believe it has already been written, and published.

Unfortunately, my “offer” for the city to purchase the Leonard Street lot for $3.5 million is not really an offer. It is nothing more than acquiescing to what the City is obligated to pay in order to exercise its Right To ReEnter. A right that our current Mayor & Chief Lawyer negotiated.

When the LRA was amended (LRA-A), the City and RDA, negotiated a strike price in the event the public parties wanted the lot back in the event of a default by POKO. When the LRA was amended, I am sure that the City and RDA thought at that time that it was the best way to have construction get started. There was significant political pressure at the time to give Olson a chance and not default POKO for its noncompliance with the LDA, as amended.

While at that time, that may have been the only option to move the project forward, in 20/20 hindsight it did not turn out as planned; certainly, no one contemplated the untimely passing of Ken Olson and the eventual foreclosure of the TYVEK temple by Citibank.

Mario decides to sue me without ever asking for a meeting post my purchase to discuss plans that I had for the area. There was a rush to judgement for no good reason, which has cost the city millions of dollars in litigation fees and opportunity costs.

The CC should be asking itself, why are we allowing our part time corporation counsel, who admits he is overworked and bursting at the seams, and has a personal animus toward me to provide counsel to them on what is best for the City?