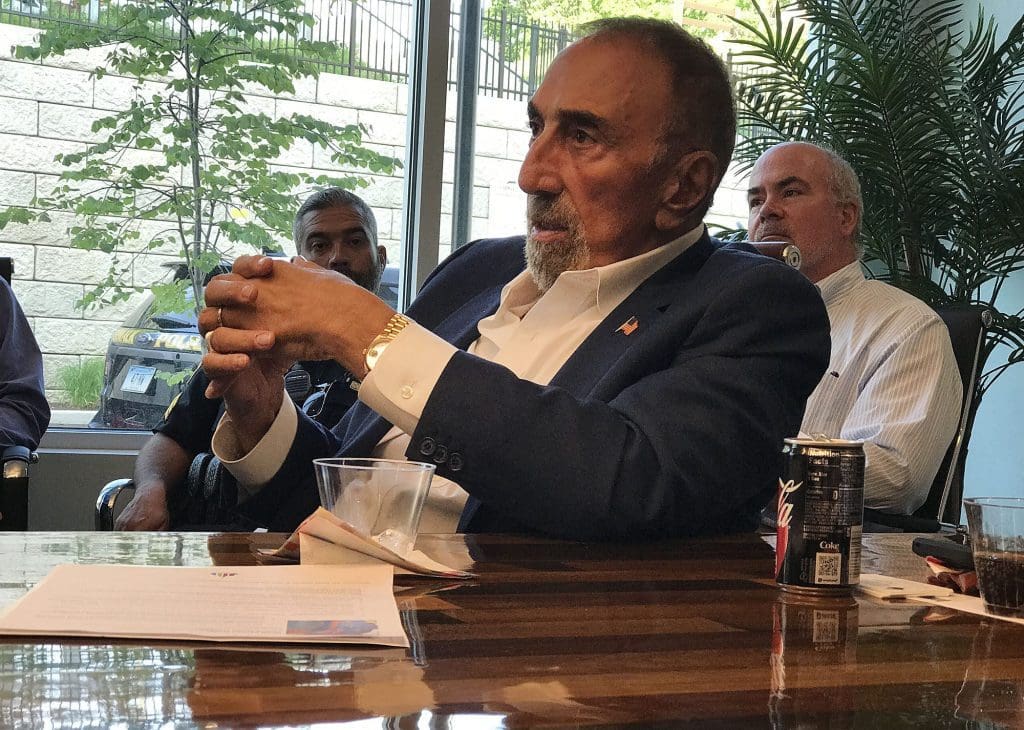 Mike DiScala attends a recent Wall Street Neighborhood Association meeting. At right is Wall Street businessman Mike McGuire, who is a true “stakeholder,” not like four of the five developers consulted by Mayor Harry Rilling on the “POKO” project, Jason Milligan said.

With real estate broker Jason Milligan casting aspersions on Mayor Harry Rilling’s claim of support from “five highly respected and reputable stakeholders” for the plan to restart the “POKO” project, Rilling on Saturday released the names and suggested that now it was time for Milligan to reveal the name of his alleged buyer for the Garden Cinemas.

Milligan has not released a name, instead issuing a lengthy statement claiming that the stakeholders have self-interest at heart and, in most cases, aren’t true stakeholders, in publicly supporting the POKO plan, a 100% affordable housing project on the corner of Isaac and Wall Streets instead of a Tyvek-covered hulk.

The controversy has also resulted in some news from developer Mike DiScala, who told NancyOnNorwalk that he is not looking to go forward with Head of the Harbor North development until the “POKO” situation is resolved, and maybe not afterwards either, depending on market conditions.

Milligan has created a “toxic” situation, boxing JHM Group into turning the Garden Cinemas into a parking garage and scaring off other investors with the threat of lawsuits, DiScala said.

“Harry knows in his soul that he is selling out the City of Norwalk,” Milligan wrote Saturday. “Using political calculus Team Rilling called in a favor from some fancy names. If Harry can say that 5 big shots support the plan then he has cover and people might not think the plan is so bad. However, the names of the 5 ‘stakeholders’ were not originally released and not one of them have actually given their public support.”

You show me yours

Rilling on Saturday released the names of the developers – Mike DiScala, Clay Fowler, Carl Keuhner, Tom Rich, and Stanley Seligson – and said Milligan should reciprocate by revealing who was allegedly interested in buying the Garden Cinemas and keep it open as a cinema arthouse, as a non-profit.

Milligan has previously declined to provide a name for the alleged buyer.

“I am not running for mayor and I don’t owe Harry any information about tentative buyers or clients of mine. I don’t want or need his help,” Milligan wrote to NancyOnNorwalk. “It is very sad to think the theater will be demolished for a small parking garage especially when there are so many other better plans that exist.”

“It is not clear how much information these 5 ‘stakeholders’ were given about the plan before their endorsement was sought?  It seems doubtful that any of them were given much information or time to fully review, and of course none of them were given independent perspective from other true stakeholders,” Milligan wrote in the Saturday email. “Now that details of the plan have emerged it will be interesting to see if any of them come forward to support it. If they ever do support the plan then they would lose immeasurable credibility and respect from the community and they should expect a very thorough scrutiny of all past projects and all pending projects with this administration. There are lots of reasons they might support this project other than it being good for Norwalk.”

Three of the “five stakeholders” have spoken with NancyOnNorwalk; their opinions on the project are highlighted in a story you can find here. The story was published Tuesday.

“The 5 so called ‘stakeholders’ have all benefited handsomely under this administration, and they surely want to keep the deals rolling. Harry no doubt pressured them to support this project,” Milligan wrote.

‘Forcing the developer to buy the theater’

DiScala did not reply to a Monday email asking for a response to Milligan’s comments.

“Jason Milligan illegally, apparently, purchased the parking for the POKO,” DiScala said Friday. “It’s actually forcing the developer to buy the theater, because where are they going to park? …He boxed them in. He could sell to the developer or to the city or to the bank, for a profit. Those three entities have chosen not to deal with him. There’s a lawsuit going on…. The situation became very toxic.”

Milligan is embroiled in a lawsuit with the City and the Norwalk Redevelopment Agency, and has sued Citibank, claiming that “POKO” is in violation of an easement for properties he owns.

Milligan bought that property, the Fairfield County Bank buildings, late last year. He bought the “POKO” parking in May 2018 in a transaction that the City says was illegal. Milligan says the LDA has already been violated many times, and is invalid.

Both sides of the resultant lawsuit are waiting for Judge Charles Lee to issue a ruling on Milligan’s motion to dismiss the complaint on the grounds that the LDA is invalid because the 2004 Wall Street Redevelopment Plan has expired.

“Mike Discala is a terrific guy,” Milligan wrote Saturday. “I respect him a lot. He is a good builder, and he genuinely cares about Norwalk and Wall st. He is the only true stakeholder in the group. I know Mike Discala and I do not believe that if he were given all relevant information about the Citibank plan that he would support it.”

DiScala, as detailed in the other story, isn’t crazy about the plan but feels it’s the best option under the circumstances.

“No developer, frankly, in their right mind, including myself, wanted to tackle it or would touch it,” he said Friday. “Jason wants to sue everybody, or everybody is suing, who needs it?”

Citibank has a preferred developer, JHM, with whom it has a good relationship and who is willing to tackle the project, DiScala said.  “You know, the devil in your backyard is better than the devil you don’t.”

“I wouldn’t touch it with a 10-foot pole,” DiScala said. “I have nothing against Jason Milligan. But who wants a lawsuit? It’s toxic. So you really are limited to who is going to buy this thing. You don’t know. All I know is what we have today, and it works, I wouldn’t chance anything else.”

Friends with Rilling, going way back

“Harry really is a good friend of mine, and has been for about 25 years,” DiScala said. “Rumor is he came to Italy with me and the answer is yes he did: 15 years ago, maybe, well before he became Mayor.”

When Rilling became Mayor, “not that we distanced ourselves, but we felt it would be better we don’t socialize as much as we used to,” DiScala said. “But I think he’s a good hardworking, honest man. I think he has the best interest of Norwalk at heart and frankly when it comes up to a situation that I am involved in with a Norwalk, he actually you know, recuses himself, and says, `you know, I can’t get involved because I do contribute to his campaign. So I don’t have any favors from him, nor do I want any favors.”

DiScala said he prefers to build “as of right” developments, not seeking variances or special permits because, “Norwalk is very difficult to navigate to begin with so, it’s hard to get things done in Norwalk.”

That’s in the context of someone who develops property around the country.

DiScala said he’s building the project he got approved in South Norwalk but he’s not going to go ahead with Head of the Harbor North – the one over the City parking lot that was allegedly going to be sold to him for $1 – unless the POKO situation is resolved because “I feel uneasy about that.”

“I’ve been encouraged by some of the stakeholders there because obviously they all want to see more density, but I am not prepared to go ahead with that project right now,” DiScala said Friday. “…The conditions of the economy, with the a geopolitical situation we’re all faced with right now, I am a little uncomfortable. There’s also a lot of apartments going up in Norwalk. I don’t know when we’ll reach the saturation point, so I say yes, but there’s a lot of conditions. We’re conservative people, so if there is a need for good housing and will provide it. We don’t build or sell or flip. We build and hold. So, if the market is right and they need our product then we’ll go ahead.”

DiScala also confirmed a story Milligan’s been telling: he got Milligan into real estate.

“I met with Jason years ago, and I think he is making more money today than he was selling yellow pages,” DiScala said. “I am glad I was able to help him.”

Anyone know of a successful CT City that’s mostly renters ? But that’s where Mayor Rilling is heading – Norwalk a City of renters. Rather than encouraging a “real City” with a major corporate center offering good jobs to City residents. That would require a City Mayor with a good business background and connections with the greater business community. Not in Norwalk’s future. Past is prologue here.

Why does this entire situation remind me of squabbling middle schoolers?
That said, thank you, Nancy on Norwalk, for keeping us really informed about the bad behavior.
If you’ve been following this story but haven’t been following up with a donation to our hard-hitting news site, please head on over to the donation box and become a sustaining donor. We cannot publish without your help!

Investing $4.4 million returns only $175,000 in property taxes per year because of the sweetheart tax deal already given by the LDA.

We hired a Chief of Economic Development for a pretty healthy salary. This person is in charge of planning, zoning and economic development.

I guess we could take Mushak’s word for it but since we have a Chief now, can we please some economic analysis of this project?

We all should be curious to see if this project is a good use of $4.4 Million of new tax payer funds?

What else could that $4.4 Million be invested in?

What other options were considered besides this particular $80 Million taxpayer bailout project?

We are given 2 choices right now.

This $80 Million bailout “something”…

Those are false choices but if those are the choices given let’s at least analyze those 2 choices in a proper way.

What is the economic impact of doing nothing?

Norwalk is currently fining “bad actor” Citibank $250 per day or $91,250 per year. We have the ability to fine Citibank another $250 if DPW would enforce their demands to restore Isaacs st to pre-construction condition. That is $182,500 per year if they do nothing on the site. The economic impact of option 2 do “Nothing” adds $182,500 to the City funds with no additional tax payer investment.

O fer goodness sake. Did nobody remember Farricker’s proposal for the garden cinemas and an arts district? Did anybody ask him?

Lawsuits are one reason to hold back on a project. Future, possibly benegicial tax and zoning changes are another. Which will win, carrot or stick?

The lovely, artsy, slightly shabby (but in a good way) Garden Cinemas is the real loser in all of this. Along, of course, with the very frustrated taxpayers who truly believe, like Jason, that this city has enormous (untapped) potential.

The ugliest, non-inviting complex I’ve ever seen! I’d like to comment negatively more but enough said. I’ve been a resident of Norwalk 76 years and have seen no improvement of the past decade. Going down hill rapidly. School overcrowding. Aesthetics gone. Industry leaving.