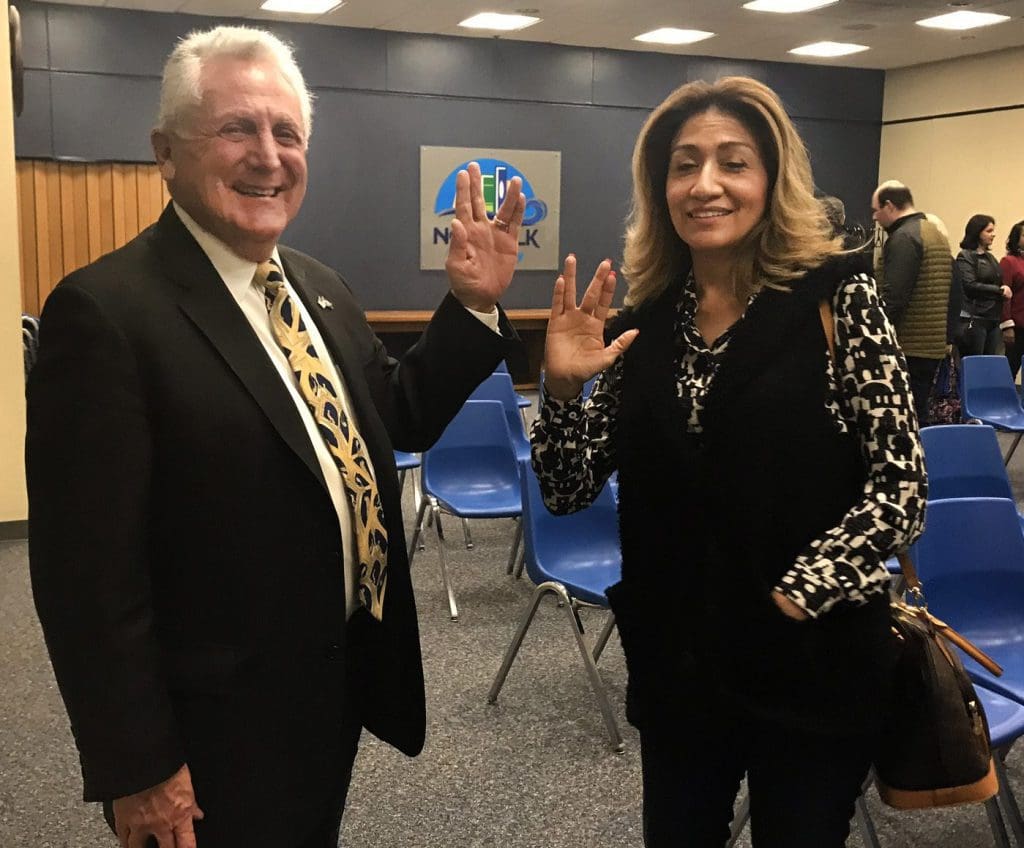 (Courtesy of National Institute of Allergy and Infectious Diseases {NIAID}.)

NORWALK, Conn. — A second Connecticut citizen has been diagnosed with the coronavirus and Norwalk officials have called a halt to large gatherings on City property, including the schools.

The STEM Expo planned by Norwalk Public Schools for next weekend has been postponed. School is cancelled Thursday. Schoolwide assemblies are on hold. Parent teacher conferences will be conducted by telephone or video chat and sporting events will continue, but without an audience.

Mayor Harry Rilling and Norwalk Superintendent of Schools Steven Adamowski sent letters to their staff Monday, and in Adamowski’s case, to families, informing them of changes meant to stop the spread of the coronavirus, COVID-19.

The announcements followed word from Gov. Ned Lamont that a second Connecticut resident has been diagnosed with the disease. Specific information would be made available after the patient and his or her family is notified.

Rilling, in his letter, directed that all “events on City-owned property, or sponsored by the City of Norwalk with expected attendance of more than 100 people are canceled through April 30.”

All out-of-state travel for employees on official City business is canceled until further notice, and employees are directed to take their City-issued technology home with them so that they will be able to work from home, if need be.

“We want people to know that the government in Norwalk will continue to operate. It won’t shut down,” Rilling said.

Each of Norwalk’s “Chiefs” and their departments have been asked to list their most critical functions, classifying them in level of importance and explaining who is responsible for the work and who can handle the functions “to make sure that we keep things going,” he said.

NancyOnNorwalk asked what would happen to important City meetings such as public hearings, where citizens want to weigh in on issues, given the ban on meetings with more than 100 people.

“We certainly are not going to limit public comment public participation at our meetings,” Rilling said. “So, we’re trying to figure out how to do that best. We’re probably going to have most of the meetings where we anticipate large groups in the community room or in the Concert Hall and ask people to kind of separate so that they’re not sitting on top of one another.”

“Meetings with expected large attendance will be held in the concert hall which can hold well over 100 people and allow for folks to sit a few chairs from one another – the arm lengths recommendation. Also, we read all electronic comments submitted, so residents can continue sending emails if they do not wish to attend a meeting,” Norwalk Communications Manager Josh Morgan said Monday afternoon in an email.

Rilling said he didn’t think the budget process would be affected. “The only way that might happen is if you have several of the key decision makers quarantined,” but people can conference in electronically.

The annual St. Patrick’s Day parade might be cancelled, as have parades in New Haven and Hartford, he said. “Our parade is relatively small. But I think to be safe, it would probably be better off for us to do that.”

“I’m in touch with (State Senate Majority Leader Bob Duff (D-25)) on a daily basis,” Rilling said. “You want to make sure that we don’t miss anything. This is a serious situation. I mean, it’s contagious – not as contagious as the flu, but nevertheless, contagious. But more severe.”

A 90-minute early dismissal day was planned by Norwalk Public Schools for Thursday to allow for parent teacher conferences.

NPS is “continuing preparations in the event something occurs in our community that requires us to close one or more schools for a period of time,” Adamowski wrote. “A next step is to organize lesson plans and materials to continue student learning at home, in the unlikely event of a long-duration closure.”
Closing Thursday will give staff “the necessary time and coordination to prepare student materials,” Adamowski said.

“During this day, teachers, administrators and districtwide staff will work together to prepare materials for students. For elementary students, this will likely include lessons that could be emailed home to students each day in the event of a closure. For middle and high school students, plans specific to each subject will be developed for delivery via Google Classrooms. Plans for special needs students will also be addressed.

“We know taking a day off can be difficult for parents, particularly those who work outside the home. However, this step is necessary for the district to prepare for any disruptions in the days and weeks ahead. While we hope a longer-term closure does not become necessary, we are committed to doing our best to make sure students can continue with some of their education, no matter what happens next.”

NPS is asking parents to answer a survey about student access to technology and the Internet at home so that it can develop a plan to send home Chromebooks or provide “hot spots” for students who need them.

Thursday is the only day NPS is cancelling for now, Adamowski said.

“The steps listed above are being taken to limit the exposure to the COVID-19 coronavirus, and to make sure Norwalk is ready if a closure becomes required,” he wrote. “I know this is an unsettling time for parents, children, teachers and staff. By working together, we can do our best to keep our community safe and healthy during these unusual circumstances.”

Statewide, the Department of Public Health is restricting visitors to all Connecticut nursing and convalescent homes, permitting guests only to in hospice or end-of-life care patients and requiring visitors to wear proper personal protective equipment.

“The COVID-19 testing capabilities at LabCorps have become fully operational,” it continued. “Quest Diagnostics is in the process of getting testing online and expects it to be available soon. All individuals being tested by these facilities must be referred by a physician in advance. Nobody should arrive at any of these facilities requesting to be tested.”

This is quite similar to SARS Coronavirus.

Interesting link to the cause: