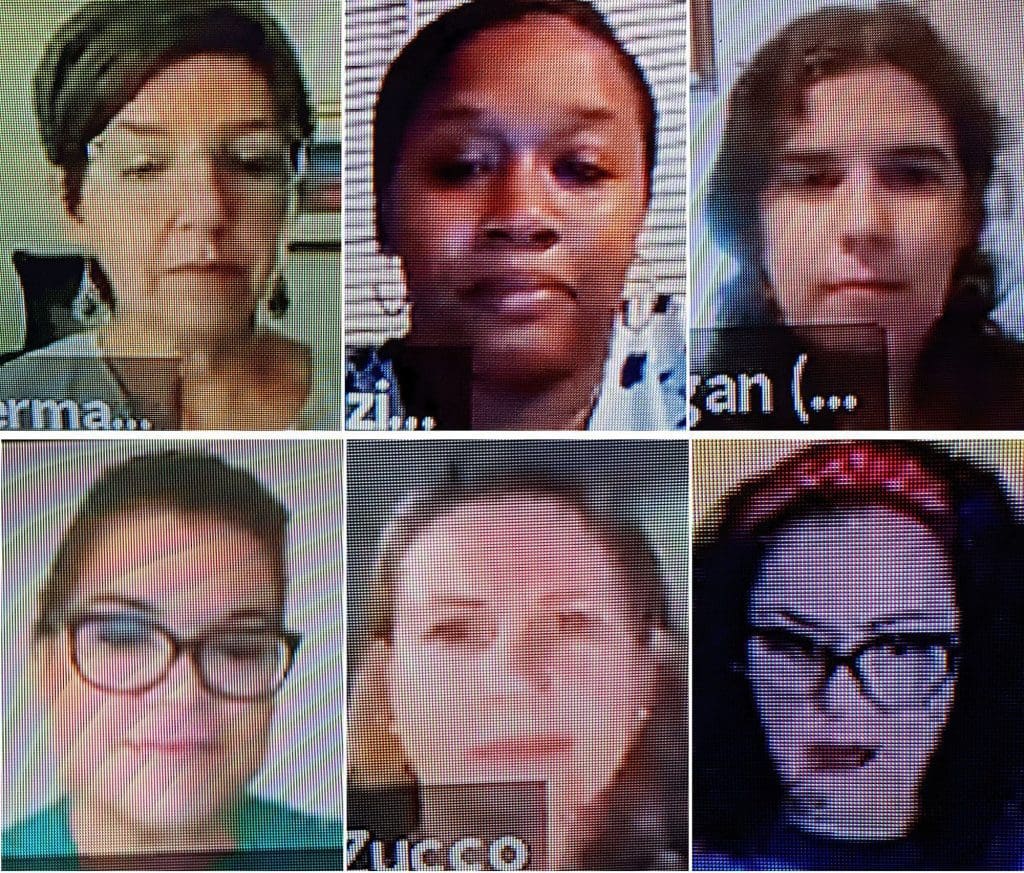 Six members of the Norwalk Commission on the Status of Women, as shown in Tuesday’s Common Council meeting on Zoom. From left in the top row are Claudia Werman Connor, Jazmine Prezzie and Anna Keegan. From left in the bottom row are Sharon Baanante, Ivonne Zucco and Iliana Zuniga.

NORWALK, Conn. — Mayor Harry Rilling has revived the Commission on the Status of Women, a long-forgotten City body that’s been inactive for at least 25 years.

“You know, women were hit disproportionately hard by COVID-19. And as we emerge from the pandemic, the time is right for the commission to be reinstated,” Rilling said at Tuesday’s Common Council meeting.

The Commission on the Status of Women became part of the City’s code in 1987, under then-Mayor Bill Collins. It was “scuttled” under former-Mayor Frank Esposito, who followed Collins, according to activist Diane Lauricella, who has been asserting for years that the defunct Commission should be revived.

According to the City Code, the Commission can have 11 members. Rilling appointed 10 women, described as “thought leaders on issues women and families face” by Council member Dominique Johnson (D-At Large) at Tuesday’s meeting, where the appointments won unanimous approval.

“I think they’re going to do a really, really good job. And, I don’t want to preclude from the fact that we’re looking for men who may be interested in serving as well,” Rilling said, speaking to NancyOnNorwalk after the Council meeting. “There are men who understand the plight of women in today’s society. Although they made tremendous strides, just like others have made tremendous strides, there’s still so much work to do to find that equity that we’re looking for.”

Maria Escalera, City of Norwalk Director of Human Services, will be the staff person assigned to the Commission, Rilling said during the meeting. The City will hold a swearing in ceremony at 10 a.m. Friday, Oct. 1, outside of City Hall. The public is invited.

The City Code defines these duties for the Commission:

“From women’s suffrage to Me Too, women have raised their voices and used their collective power to bring about important change. I know putting this group together is going to make a lasting impact for our community,” Rilling said in a news release.

“While many of the City’s goals, priorities, and achievements benefit women and girls in Norwalk, the Commission will solely focus on improving the lives of Norwalk women. The National Women’s Law Center recently announced that based on current job growth reported by the Bureau of Labor Statistics, it would take women nine years to regain the jobs they lost during the COVID-19 pandemic,” the news release said.

Lauricella said the Commission has been necessary for the entire time it’s been defunct.

“It has also been very necessary under this Administration considering how certain women are marginalized for speaking truth to power,” she said in an email. “I advocated for the need to resurrect this Commission when Harry first ran in 2013.  During a later campaign forum (2019?), I asked if he would revive this Commission, started by Bill Collins, and he stated that his City Clerk, Donna King, told him ‘it wasn’t necessary’.  Go figure.  I wish these nominees luck and ask that they do not forget whose sisters’ shoulders they stand upon and keep an open mind and an open door to support fairness and respect.”

Earlier, he had said, “I’m not even sure how it came about that I was made aware” that the Commission existed in City Code.

Rilling said he had tried to resurrect the Commission “maybe two or three years” into his administration. “But it was very difficult to get people together and get people to, you know, just serve,” he said. “…There just wasn’t the energy to get it done.”

“Several months ago,” he began talking with State Rep. Stephanie Thomas (D-143), Johnson, Baanate and Zuniga, and “we decided let’s try to bring this back,” because women have lost their jobs in the pandemic due to the need to take care of children and weren’t getting equal pay for equal work before that, he said. “We wanted to explore what the situation was now, and determine how we could improve the things that needed to be improved.”

The 10 appointees are “amazing women of diverse backgrounds, ages, races, ethnicities, and lived experiences. They represent Norwalk and have so much to offer,” Rilling said in the news release.

Baanante is co-founder of Norwalk Women Who Vote and founder of the Love All project, according to her resume. Her background includes being director of events for the Grace Farms Foundation from 2014 to 2016 and Morgan Stanley director for marketing and events from 2005 to 2010.

Coffy describes herself as a “End-of-Life Care Consultant, Lecturer, Motivational Speaker, Hypnotist, Inventor, Health Advocate” on her LinkedIn page. She was an adjunct instructor in nursing from 2013-14 at Norwalk Community College and a independent contractor/case manager for 4Nurses, her resume states.

Keegan, an attorney, has been director of housing operations for the Norwalk Housing Authority since April and was with the Norwalk Fair Rent department for nearly nine years before taking that role, serving as acting director for the last three.

O’Toole Giandurco has been an executive assistant with Tengram Capital since 2012 and is a Lockwood Mathews Mansion trustee. She served four years on the Common Council and two years on the Oak Hills Park Authority.

Prezzie expects to become a licensed master social worker this year and is director of the Human Services Council’s Norwalk mentor program.

Rendon Garcia is an instructor in education at Harvard Graduate School of Education.

Testa-Buzzee is a “dedicated higher education professional with over 25 years of progressive experience in four year and two year institutions with a proven record of accomplishments in student affairs, academic affairs and workforce development,” according to her resume.

Werman Connor has more than “30 years of strategic leadership in organizational management; human rights, social justice, and legal advocacy; community education and engagement; fund raising; written communications and public speaking in the nonprofit sector in the U.S., Africa, and Southeast Asia,” according to her resume.

Zucco has been director of operations & human resources for Building One Community in Stamford and served as the organization’s Workforce Development Department director before that, according to her resume.

Zuniga is an “award-winning digital strategist with track record of success transforming ideas into targeted and bespoke online, interactive experiences and strategies across multiple platforms, channels and geographies,” according to her resume. Honors include being named a Woman of Distinction this year by the Darien/ Norwalk YWCA.

“I was drawn to being a part of this commission to bring the perspective of women to the table in all situations and especially at meetings where decisions that affect the entire city and its residents are made,” O’Toole Giandurco said in an email. “I think once we all begin meeting we will come up with goals and benchmarks. I look forward to meeting my fellow commissioners at the swearing in ceremony on Friday morning.”

“Members of the Commission bring diverse perspectives and experiences, which can be leveraged to reach deep into the Norwalk community to understand the systems that maintain the status quo,” Connor said.

She said, “I hope to be part of a process of real change in Norwalk, which has already begun with the reinstatement of the Commission and city leadership’s renewed commitment to gender equality. I hope to be part of effective efforts to identify and illuminate inequities and social barriers that have a disproportionate negative impact on women in Norwalk. Working across our community, I believe we can collectively start to resolve these barriers and implement new practices and policies that uplift women in sustainable and meaningful ways.”

“I’m happy to see the commission revived, but its demise shows that city bodies, no matter how well intended, need support and follow-up from City Hall if we expect them to produce meaningful results. This one shows what happens when the support is not provided. For example, what is its budget?” Collins wrote Wednesday. “I wish them luck. There is a lot to do.”

NancyOnNorwalk asked Rilling about the timing of the announcement, weeks before the election.

“No matter what I do, a month or two months before an election, it’s always going to be viewed as having some sort of underlying reason. But, you know, I can’t let that dissuade me from moving forward with things that are important,” he said.

He also mentioned the drive to create an Equity and Justice for All Commission, currently being guided by consultants Led By Us.

“We have deliverables coming in the next two weeks” from Led By Us.

Council members recently discussed the consulting firm’s outreach has done, as only about 100 Norwalk residents have responded.

“That’s really sad,” Rilling said. “But don’t forget the main focus of this group is to help us form the Commission, to get it running… then the commission will be tasked with outreach into the community, looking where there may be systemic racism, looking for issues where people feel disenfranchised, and trying to identify those issues, and then try to work on strategies that can overcome that.”

So there is a commission on women…. But nothing for men?…. Hmmm

This seems a little short sighted by the city…. After all women have been claiming for decades “all we want is equality”. The truth is women ( who make up 51% of the population and are therefore the majority) are given favorable status and get to cherry pick the equality they want