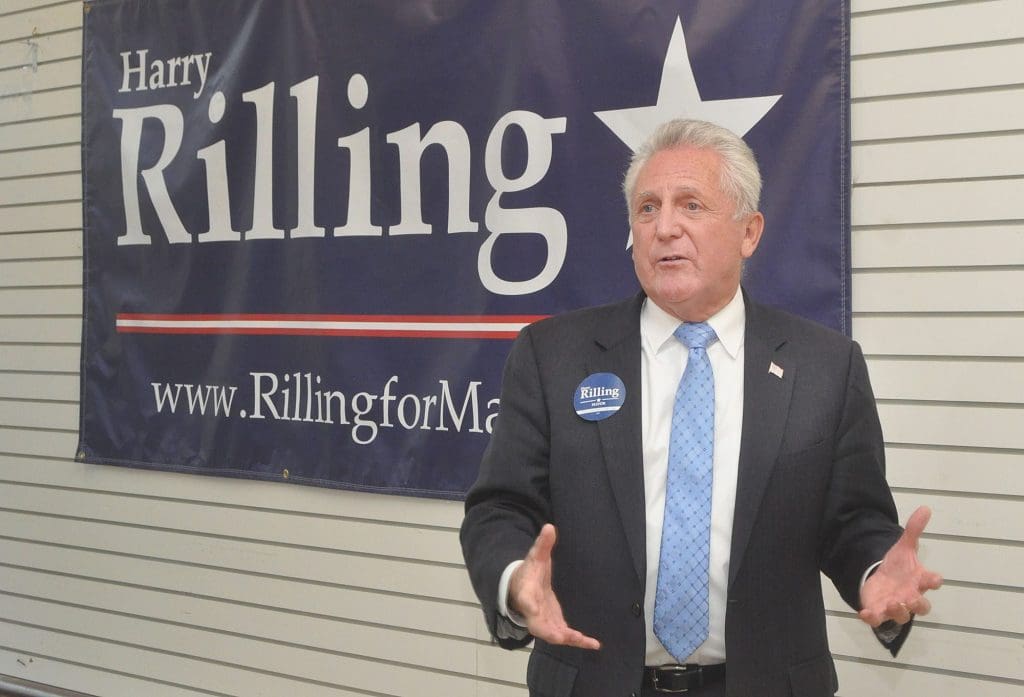 NORWALK, Conn. — Mayor Harry Rilling has already raised more than $60,000 toward his campaign for a fifth two-year term, $20,000 of it since the first of the year, according to spokesman Adam Wood.

Common Council member and fellow Democrat John Kydes, as-yet Rilling’s only opponent, trails far behind, but touts a $4,000 boost as of Thursday.

“Mayor Rilling’s campaign has raised $42,025 in about a month’s time. The campaign committee was created in November following the presidential election,” Rilling campaign spokesman Adam Wood said Friday. “Donations came from carpenters, firefighters, ironworkers, laborers, Democrats and Republicans. The majority of the contributors were from Norwalk and surrounding towns.”

Asked on Friday about his filing, Kydes said, “My website went live this morning and I’m happy to say that we raised over $4,000 in the first 12 hours. The response has been great and to have a majority of these donations come from Norwalkers is a great sign. I’m looking forward to what the coming months will bring.”

Rumor has it that Rilling may face more Democratic opponents.

“We are talking to a number of interested people in the party but have not settled on one yet,” Republican Town Committee Chairman Carl Dickens said in an email.

“Due to the pandemic, campaigns are handling both fundraising and traditional events differently as evidenced by the recent presidential race. The circumstance presents a lot of challenges,” Wood said Saturday. “Large public events will likely not occur until the safety of participants could be assured. Public health is a top priority for the Mayor and that will be reflected in his actions as Mayor and as a candidate.”

Nate Yordon, treasurer for Friends of Rilling, specified in the 36-page filing that the Mayor’s campaign began on Nov. 12. The summary:

“I am grateful to each and every donor for their generosity,” Rilling is quoted as saying. “These are challenging times and I am incredibly thankful for their ongoing support.”

“We are extremely pleased with the broad level of support for Mayor Rilling from across the community,” Yordon is quoted as saying. “While this is just the beginning, it is so encouraging to see so many different groups and individuals contributing to the cause.”

The documents show these itemizations:

Companies that bought advertising in a book for $250

All these companies do work for the city. All builders and many people from out of Norwalk. Wow…those are the supporter for team Rilling.

Well at least one aspect of the Mayor’s office is busy. Any indication as to when City Hall might reopen ever again? What’s the matter no money in the capital budget for hand wash?

Kydes has nothing to offer – I think his lackluster fundraising answers his question about whether there’s any interest in him running. Throw in the towel John.

Nancy- I wish someone would work on bring the human trafficking issue to light!
I know there have been massage facility closures and arrests for prostitution. But would like to know more about these issues and court follow up. How is the data for these cases tracked? I would like to hear what our state and local government are doing about these issues?
What is our state/town data on human trafficking and how is law enforcement fighting and rooting out this problem.
And how are child protective services watching and protecting the children in their care from this problem? Please, let’s talk about the protective measures we have in place for these kids and also what the states numbers are for missing persons, runaways and recovered persons…both in and out of protective care. This is an important issue and human trafficking is REAL!! I really would like to see this issue talked about and covered much more by our politicians. Politicians please talk about it, we want to know where our town and state leaders stand on this problem. Also, let’s make people aware of what to look for and how to help the potential victims! I know there are people out there that feel trapped and need help from our local leaders! Thank you!

I love driving up East Avenue and seeing the blinking sign telling me to wear my mask AND wishing me a happy holiday season. Thankfully we have Valentines Day, St Pats and Easter coming up.

At least the sign doesn’t still warn me of a water shortage. It’s sometime the little things that just go to show you how well our city is run.

“Rumor has it that Rilling may face more Democratic opponents.”

I sure hope so, the faction of power is too concentrated in Norwalk. Special interests get an advantage and a fifth term is too many.

This Mayor is tied tightly to the teachers union. Also the police department, although he’s silent on controversy. Attorneys, out of town contributors with local special interests, more attorneys, carpenters and construction trade.

Everyone is so convinced, in February.

Hmm Bobby Lamb…Kydes has lots to offer. He is raising his kids here, has a business here and has been involved in the community for years. Rilling has been in office for 8 years. That is plenty of time. Change is needed. Too many apartments, no zoning reform ( which he originally campaigned on), a top heavy city hall that isn’t even full opened. Norwalk doesn’t need two more years of Harry Rilling. I am glad that John threw his name into the ring and is taking on a member of his own party because he wants change and doesn’t like the direction the city is taking in certain areas. Good for him and good for Norwalk! I applaud him and think it is a courageous move.

I am surprised to see the police from the top 10 list dont donate. Harry allows the cherade of unlimited earnings and overtime to continue. Does Harry still have an office in city hall?