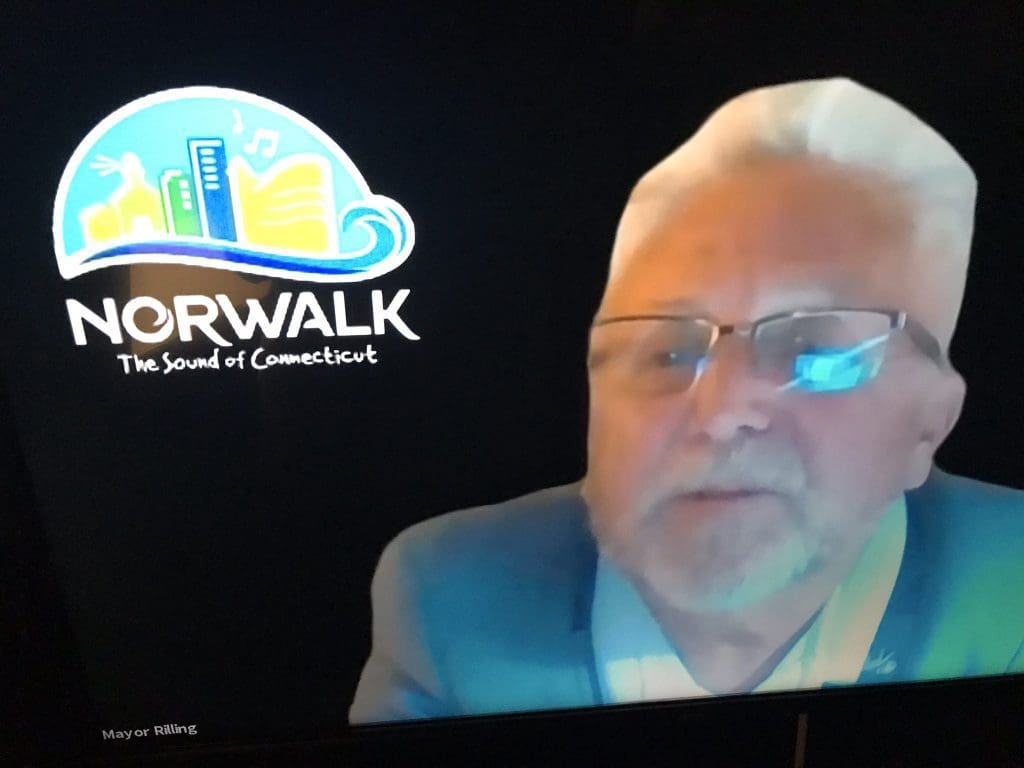 NORWALK, Conn. – Mayor Harry Rilling supports the Black Lives Matter protests. At the same time, he shares the concerns of medical professionals and others who fear “we might see a spike in the cases” of COVID-19.

In an interview Friday with NoN, Rilling stood by his actions during the pandemic, while acknowledging the difficulty of living under quarantine – for everyone, including himself. But while some have complained that “the cure is worse than the disease,” he said the steps that were taken to slow the spread of the virus were “absolutely the right idea.”

To critics who have called Rilling’s support for the May 31 Black Lives Matter rally hypocritical in light of the mandate for physical distancing, the mayor said he “did not see one person without a face mask” among the estimated 300 attendees. For that reason, he said, the requirement was met to wear a face covering when unable to maintain a six-foot distance from others.

Rilling, a former Norwalk police chief, said he prays that real change will come out of the protests, adding that they feel “different” this time. “Like I said in the past, we’ve all been guilty of responding, but then failing to deliver. And I’m just as guilty as anybody else. I sat in front of those meetings as … very little, if anything, happened,” he said.
“You will see some things happening in Norwalk that we are going to make a commitment to, that will hopefully start to take effect and be a model for other cities and communities. Or we’re going to be looking to other communities as well, some of the things they’re doing. Nobody can do everything. But everybody can do something.”

Rilling said the rallies and protests in response to the death of George Floyd, the 46-year-old African American man killed by police during his arrest in Minneapolis on May 25, have added to the challenge of managing the pandemic. So has the speed with which new and sometimes contradictory information is disseminated, often changing from one day to the next.

“At a time like this, you know, people expect more from the government, and we have to be there for them. But it’s not just local governments…the assistance that was given by the federal government has certainly helped people.”

Still, the mayor said he was “very disappointed” that in many cases, federal dollars meant to help local businesses were spent before people had a chance to apply for them.

Rilling and his wife, Lucia, have been supporting Norwalk businesses by ordering takeout every day. His daily drives around the city help him keep abreast of what’s happening, while allowing him to maintain the social/physical distance required by the governor’s executive order.

He praised members of his team, and said they are mapping the spread of the virus to determine whether densely populated areas – apartment complexes, for one – have been hardest hit. So far, Rilling said, that does not appear to be the case. “Obviously, people are going to live in close proximity. We still have the suburbs. We have a downtown area.”

Even so, “there’s no indication that people living in any of the recently created apartments have experienced (infection) in larger numbers than any other area.” The early mapping actually shows “that the cases seem to be up near the hospital…We’re trying to make sense out of that.”

I have no issue with the peaceful protests happening our city. What I do have an issue with is that the city is picking and choosing what is allowed and when. Why can 300 people gather with masks to peacefully protest but City Hall can’t reopen with employees wearing masks? Why are half is the parking spaces blocked off at the beach but they weren’t blocked off at City Hall when the peaceful protesters parked their cars to march? Different rules apply. It’s time to reopen City Hall with employees wearing masks all day and having their temperature taken every time they enter the building. Stop talking out of both sides of your mask!

There is a big difference between wearing a mask indoors at City Hall and outside. Outside is much safer.

The “cure” is NOT “worse” than the disease. When you’re in the Emergency Room and asked if it comes to it do you want to be in a medically induced coma on a ventilator, when you’re told that there are only experimental drugs to try, and when you don’t know if you’re going to live or die; things become simple and clear. Wear masks, gloves, observe distancing, use sanitizer, wash hands. The Virus is real. By the Grace of God I lived.
Fran Di Meglio

Fran, we are all so glad you survived this terrible virus! What a scary ordeal. Thank you for sharing your thoughts, which are based on experience. I hope Norwalkers continue to be smart about how they proceed during this time.

Fran, and you survived, like hundreds of thousands. You are in the majority and probably maybe in a most worst case scenario. Not everyone was hospitalized not everyone had to go on a ventilator (which is worse, even causing death).
Why did you not demand HCQ?

I participated in the Mayo Clinic Plasma Study. It was effective the next day. I have signed up to be a donor as someone saved my life by donating theirs. I was never on a ventilator but that’s the question they ask you in the Emergency Room. Everyone continue to be vigilant. I see people ignoring protocols in stores and all around. No masks, masks below the nose, on the chin. Put up with it. It’s a small inconvenience compared to the alternative. Thank you to all those that prayed for me. Your prayers sustained me and the Hand of God saved me. Blessings to all.

” It’s a small inconvenience compared to the alternative”.

I’m sorry, but what alternative? Our freedom? Sorry Fran, not going to side with you on this one. Please think about what you are asking. It is totally ridiculous to give up our freedom for security. You can’t get security without freedom.

I’m not looking for anyone to side with me, just sharing my experience. The alternative is laying in a hospital bed not knowing if you’re going to live or die. Be well.