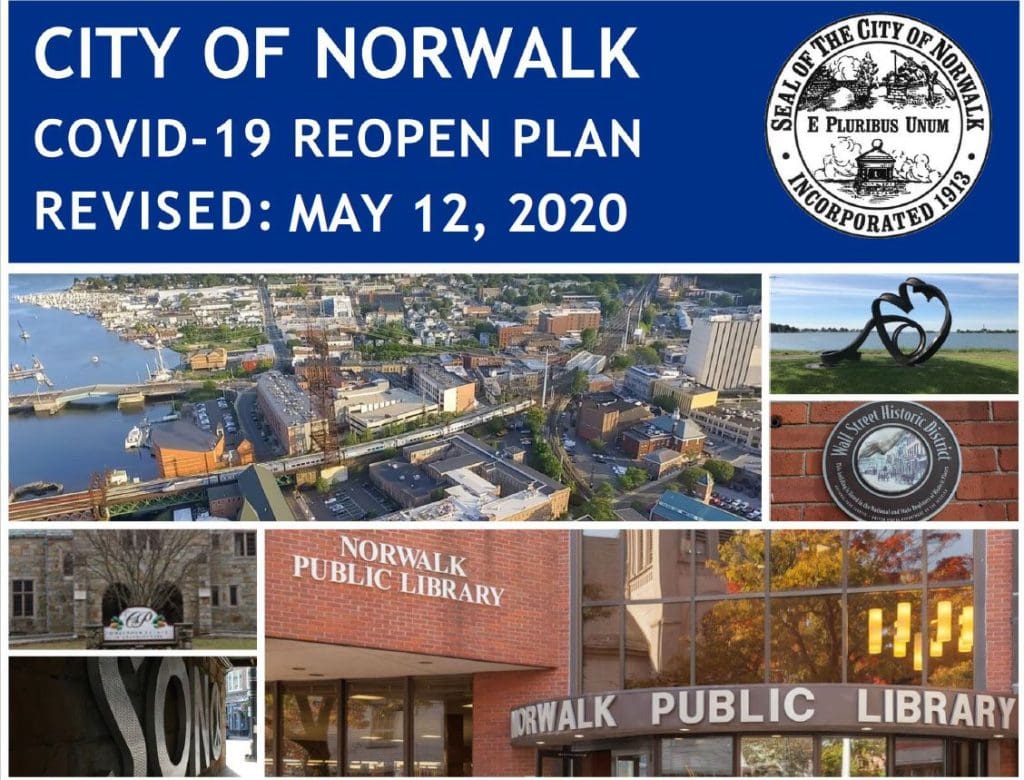 The title page of the Norwalk Reopen Plan.

Rilling released the Reopen Norwalk Plan, focused only on municipal services and facilities, in a press release. The four-phase plan will align with the State of Connecticut Reopening Plan; the full 22-page plan is available here.

You will not be able to swim, fish or use the beach amenities, including splash pad, picnic tables, grills, restrooms, and playgrounds. “Summer concerts, movies, softball, volleyball, bocce ball leagues and all events, including the Fourth of July Fireworks, have been canceled,” the plan states.

Similar restrictions are planned for other Norwalk parks.

The plan hinges on hospitalizations continuing to decrease, Rilling said at Tuesday’s Common Council meeting, via Zoom. He cautioned that the novel coronavirus causing COVID-19 is unpredictable and knowledge of its affects is evolving.

“Just yesterday, I found that some people were walking into an emergency room … (with) a dangerously low level of oxygen in their bloodstream, to a point where they should have been experiencing organ failure, but they weren’t,” Rilling said. “They were speaking, they were coherent. They were ambulatory. So, we don’t know how this is going to affect us.”

He referred to children being treated at Yale-New Haven Hospital; at least six children are being treated for “the mysterious new severe inflammatory illness that doctors believe is connected to COVID-19 and has caused alarm across the country,” the Hartford Courant reported Tuesday.

“We do not have a guidebook on how to handle this,” Rilling said.  “We have to learn on a daily basis, every single day …We want to make sure that we understand how dangerous this situation is.”

Phase One of Norwalk’s reopening will limit parking at the beaches and Cranbury Park to 50 percent capacity. At Calf Pasture, there will be a new designated non-resident parking area with a limit of 150 vehicles. At Cranbury Parks, the playgrounds and disc golf course will be closed. Dogs will be permitted but only on a leash.

“All athletic courts, playgrounds, and athletic fields will remain closed during Phase One,” the City’s press release said. “City Hall and the Norwalk Public Library will also remain closed to the public throughout Phase One. Norwalk Public Schools remain closed for the academic year following the Governor’s executive order, however free meal distribution will continue through at least June 30.”

Timing of the reopening will be coordinated with the State and plans may shift as the health crisis changes.

“Gathering sizes, physical distancing measures, and the use of masks or face coverings are to be determined by the State,” and Norwalk Police may fine citizens who are not following the guidelines, the press release said.

“I know this is a very frustrating time for all of us,” Rilling said at the Council meeting. “We would like nothing better than to open up the City of Norwalk again, to get back to some degree of normalcy. But if we do that too quickly, I fear that it would be a mistake.”

Why do we offer 150 non resident beach passes when only 50% parking capacity is allowed?
Remember last summer when the beach was free to everyone except of course Norwalk residents.
Will this be dejavue all over again?

Rilling wants Norwalk to be like Bridgeport, rather than model towns such as Darien, New Canaan, Wilton, Weston.
Sad.

Maybe close Washington street and set up tables for restaurants to have much greater capacity. Ditto for downtown Rowayton and any other areas that would be appropriate.

Too bad the mayor can’t credit the citizens of Norwalk to make the right decisions to keep their families safe. The citizens of this town should have the freedom to do the activities they love without government interference. Significantly restricting activities in the parks is one example. The known cases of Covid transmission in an outdoor setting are only 2 GLOBALLY and were from people having a long face to face conversation. That’s the SCIENCE OF IT. Perhaps you should restrict your activities Mayor to protecting the vulnerable in nursing homes and assisted living facilities and let the rest of us get back to making a living which the government CANNOT provide.

Also regarding the libraries. Please explain why the libraries remain closed and can’t distribute books and videos when supermarkets are fully opened for business? Why can’t the libraries follow similar procedures when shelter at home families could use some entertainment that the libraries have in ample supply? Is the city of Norwalk not up to the safe task that Costco and Walmart seemed to have solved.

Tell non-residents to go to Sherwood Island. I’m not sure why we have to placate them during this period.