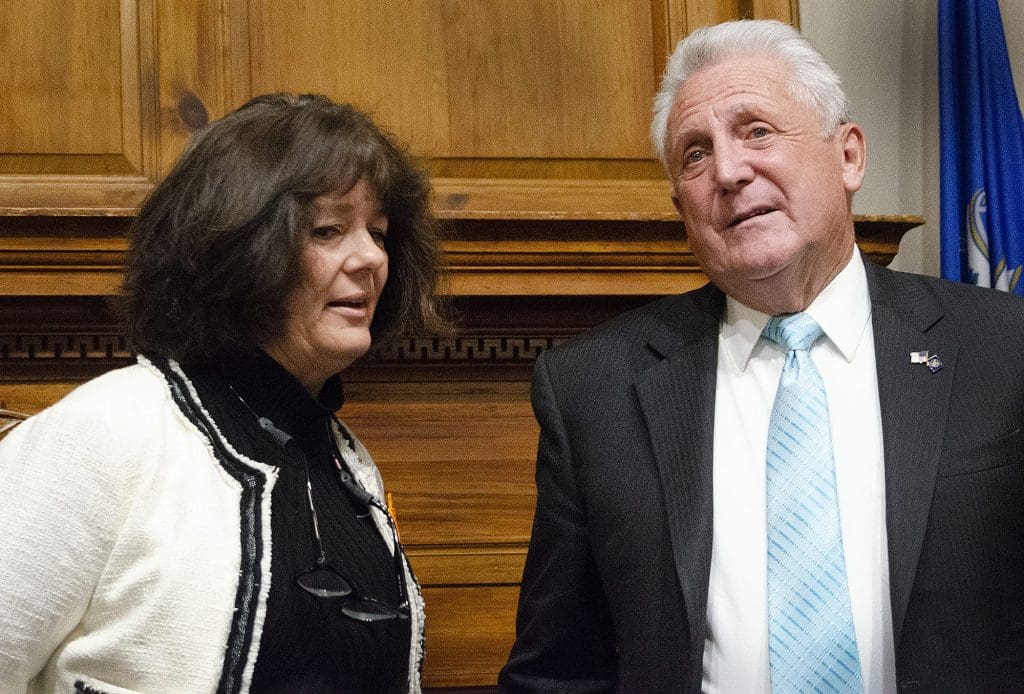 NORWALK, Conn. – Mayor Harry Rilling has been endorsed by the American Federation of Teachers in his drive for reelection.

“Our state federation’s endorsement of Mayor Rilling’s re-election is a testament to his success leading the city through a period of growth while consistently demonstrating respect for working people,” Norwalk Federation of Teachers President Mary Yordon said in a statement.

Rilling is opposed in his quest for a fourth 2-year term by Republican-endorsed candidate Lisa Brinton.

Brinton, who touts her credentials as an education activist, said she was not surprised by the endorsement. “The AFT Presidents’ husband is the mayor’s campaign treasurer,” she wrote.

Yordon is married to Nate Yordon, who has served as Rilling campaign treasurer in each of his four campaigns. They live in Easton.

Rilling in a press release said, “I am especially honored to be endorsed by the American Federation of Teachers because teaching is the most noble profession. Teachers are passionate in what they do; they help our children grow and develop to their fullest potential. Teachers have a huge impact on the City of Norwalk, our state and the world. I will continue to be committed to providing the best education for all Norwalk children by providing teachers with the resources they need to do their job.”

“AFT Connecticut is approximately 30,000 working people in nearly 90 local unions, including those representing the certified educators, non-certified paraprofessionals and school support staff in Norwalk Public Schools. The federation’s members also include faculty at Norwalk Community College, as well as judicial professionals at the Norwalk Courthouse and state employees at several regional facilities,” the release said.

“Our school community has been able to implement these and so many other improvements due to Mayor Rilling’s consistent support.

“We are also proud to once again back Norwalk Federation of Teachers union member and Common Council incumbent Barbara Smyth. AFT Connecticut’s executive board additionally endorsed Colin Hosten’s re-election to serve with her on the council, and Erica DePalma to serve on the Board of Education for District D.

“Harry, Barbara, Colin, and Erica understand that ‘labor is your neighbor’ and what it takes to preserve the small town feel of this big place called Norwalk. They recognize that our members’ commitment to our community goes beyond ‘9 to 5’ because so many of us are also residents who have a real stake in Norwalk’s future.”

Rilling has also been endorsed by the United Food and Commercial Workers Union (UFCW), AFSCME (American Federation of State, County & Municipal Employees) Council 4, and the Norwalk police and fire unions. Brinton has not announced any endorsements from organizations. The “endorsement” tab on her LisaForNorwalk website takes you to a letter to the editor written by Juanita Olquin.

The NFT and the AFT are special interests. Norwalk’s NFT is an affiliate of the AFT, the national organization.

The NFT DOES NOT advocate for children or parents unless it is in their best interests.

Riling has a boatload of special interest endorsements, what about the rest of us?

What a shocker they backed all Democratic Candidates!! Never mind backing candidates that would do the best job. I guess that doesn’t matter.

This is how politicians like Rilling stay in power.

First, they schedule elections for odd-numbered years to depress turnout.

Then, they rely on the fact that their elections aren’t worth covering in anything but local or regional news, which most residents don’t read.

They don’t advertise the election in every shop window, they keep it hush-hush.

And against all this poor turnout – only ~14k voted in 2015 out of a 90k population – all they have to do is mobilize a handful of well-organized and highly-motivated constituencies -like these unions – to win a First-Past-The-Post election.

We all deserve better than bad Democrats like Rilling.

And why are there no progressive challengers? Because Rilling can crowd them out of the local party and pretend that THEY’RE the bad Democrats.

But it’s also because we don’t have election rules like Ranked Choice which might allow us to vote our true preference.

Wow-what a surprise! Nothing to see here…

Rilling has always been a Union hack. He has made a career out of selling out the taxpayers of this City in favor of his Public Sector Union brethren.

Reporting that Rilling is getting Union endorsements is like reporting that the Chinese government is Communist. No one would expect otherwise.