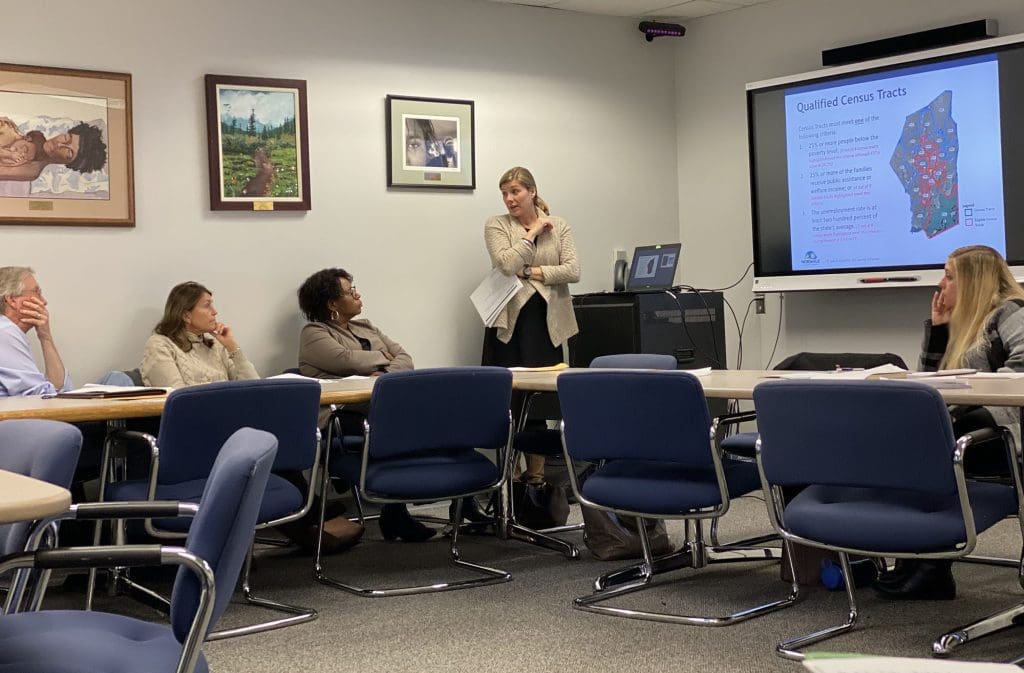 NORWALK, Conn. – Since the SoNo Collection officially launched in October, about half of its tenants have opened for business, with an additional 15 percent expected to open their doors in the next six weeks, according to Brookfield Properties representatives.

Paul Madden, director of design for Brookfield Properties, along with Attorney William Hennessey, who represented the company and its predecessor General Growth Properties (GGP) in negotiations with the city, provided updates to the Planning Committee on Thursday.

“We were asked a couple months ago if we could appear at one of your meetings and just give you an update and I’m happy to do that,” Hennessy said. “The most profound update is the mall’s open.”

Stores and restaurants within the mall have been opening on a “rolling basis,” a strategy adopted by Brookfield Properties in the spring, Madden said, when they realized that not all would be ready for the planned October opening.

“We kind of changed our approach — the anchors also staggered openings so we kind of developed this rolling opening concept, where you had Nordstrom and a smaller percentage (open),” he said. “Bloomingdales opened roughly a month later. We had Pinstripes open about a month after that. We’ll probably have another 15 percent open within the next six weeks.”

Part of the delay was due to higher than expected construction costs for the fit-ups, Madden said.

“We’re 90 percent leased,” he said. “Some of the tenants actually, as so much work was going on towards opening, they actually ran into some issues with construction pricing, on average about 30 percent higher than projected…Some of those tenants had to rebid, little bit of redrawing that kind of slowed up some of the permitting. So, 90 percent should be here come late spring, so we feel like we’ll be stabilized at that point.”

Council member Tom Livingston (D–District E) said that the biggest question he hears is: “Is it meeting expectations?”

“The short answer from a corporate perspective is absolutely,” Madden said.

Madden said they have about 10 percent of “fill-in space” left that the company is working on leasing.

“Nationally, we run about 95 percent so it’s kind of an incremental uptick to get to where we consider ourselves stabilized from a corporate level,” he said.

Council members also questioned safety at the SoNo Collection, given the reports of large groups of teenagers and children causing issues at other malls across the state and country.

“We have a parent–guidance initiative at a number of our properties, we don’t think we need to use that here,” he said.

The initiative that the company deploys in other malls requires all visitors under 16 or so to be accompanied by an adult at all times, Madden said, adding that it hasn’t been necessary to implement in Norwalk.

“As of right now, what we’re seeing the people that are coming to visit, we’re not seeing that as materializing currently as an issue,” he said.

The Planning Committee also received more information about potentially expanding its Enterprise Zone to include the West Avenue-Wall Street area, adding a Tax Increment Financing (TIF) district to the area, as well as a look at what potential properties could be developed in the area over the next few years.

In a December memo to the committee, Norwalk’s Chief of Economic and Community Development Jessica Casey explained that “an enterprise zone is a designated geography in which taxes are abated as of right for a period of 7 years to encourage new development and business growth in underutilized areas.”

The city established an Enterprise Zone for South Norwalk in 1982 and is looking into expanding the zone to include the West Avenue-Wall Street area.

To qualify as an Enterprise Zone, a census tract must be zoned to allow commercial or industrial activity and meet at least one of the following criteria:

The West Avenue-Wall Street census tract meets the second and third criteria, with 33.5 percent of families receiving public assistance or welfare income and an unemployment rate of 8.6 percent, Casey told the committee.

Casey also said the City is looking into implementing a TIF district in the Wall Street area. The way a TIF district works, Casey explained, is that a base property tax is paid to the city but if the taxes on a property go up due to improvements made to the site, that increased amount, or a portion of it, can be put into a special fund that is used to help the district in some way, such as improved infrastructure, lighting, landscaping, etc.

Casey said they’re planning for the fiscal year 2021 budget “to put money into the budget to bring on a TIF consultant to be able to start the process.”

She listed the Loehmanns Plaza site (also known as “the Pinnacle development”), the YMCA site, Wall Street Place, Highpointe and Norwalk Public Library as “short-term” sites that could come online within the next three years.

Casey said some of the sites listed as “long-term” might not be currently utilized to their “highest and best use.” Those sites listed were the library block, which includes the buildings surrounding the main library, the Lillian August site, Auto Zone and the medical office sites, and CVS and Dunkin Donuts sites.

i think Mr. Madden needs to spend more time at this mall. My wife and I, living near the mall and have frequented Nordstroms, Bloomingdales and Pinstripes a few times now. We have observed numerous groups of what appears to be pre teens playing on the roof deck and climbing on the poles near the edge. Also groups of older children are now hanging out, at night, in the entrance lobby at the intersection of North Water Street and West Ave. This is not a one time situation, but we have noticed this on frequent occasions. Is mall management going to wait for the first security incident or disaster before doing anything? They should take a preemptive posture.
If Mr. Madden does not do anything to protect shoppers I will be, and maybe others, not shopping or dining here as much as it could be convenient.

Any reports on how the Mall is doing? I’ve been four times and I think it is a very nice place to shop. Each time though, it felt like there were more store assistants than paying customers.
Just curious.

Sam Tyler
What is it that your feel you need to be protected from? Just because children are at the mall doesnt mean they are going to harm you.I would say they have just as much right to be at the mall as the older boomers that are waling the mall in the morning.

@Ron Morris – Hey, I agree with you. I fondly remember playing tag at recently built Macys mall in 60s in Queens,Ny..Sure we didn’t buy anything, but what a playground! Security did chase us out, but that was fun as well. So I say let the kids hang out, play tag and enjoy a new playground. Just don’t break anything, and don’t knock over anyone! If security chases any kids out, that dates back to the 60s -nothing new.

It seems that some of us are not aware of the mall violence that has occurred in neighboring malls such as Trumbull. Children playing on the roof near the unprotected edge is a disaster waiting to happen. Should we wait until the first incident to happen?

I forgot to mention the December 26th incident at the Milford Mall. Read the news about these recurring incidents of mall violence.

Kelly Kultys was on staff at the Hour but left a few months ago. She is now freelancing to NancyOnNorwalk. We are very happy to have her on board!

Congratulations to you both, Nancy!

I agree with Sam. I remember seeing photos showing people climbing on the light poles on the roof. Very dangerous. I hope it is addressed before a tragic accident happens.