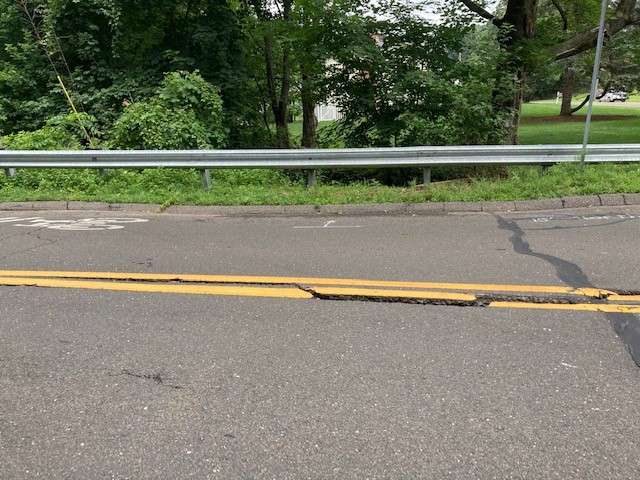 City officials found a crack in the roadway near the intersection of Rowayton Avenue and Woodchuck Lane last week and closed the road. On Monday, Valadares told the Traffic Authority that an outside consultant was brought in, and it was determined that a heavy rain event damaged the underside of the bridge arch, extending into the bridge structure.

Valadares said the bridge was inspected two years ago, and it was found that, while the bridge had sustained deterioration, it was not to the point of requiring immediate repairs or closure. “We had bridges in worse condition,” she said.

Valadares said the bridge is currently closed and will remain so. She said signage will be installed instructing drivers how to exit the residential neighborhood on either side of the bridge.

She said the much of the closure time will be spent obtaining the required materials to repair the bridge.

But why shut down both Highland AND Rowayton down at the same time?

Piet, Rowayton Ave is very dangerous! Highland is construction which will be done soon. If it wasn’t for the storm Rowayton Ave would be open. I placed the barriers there and looked at the bridge. Not good! Safety is our biggest concern. Have a great day! 👍

Totally agree! Also, the detour signs all over the town’s road construction sites are incomplete. After the first Detour sign, they leave you in never-never-land.

Why clean storm drains routinely anymore when we can just let the water wash out the subgrade. More apartments is definitely one solution.