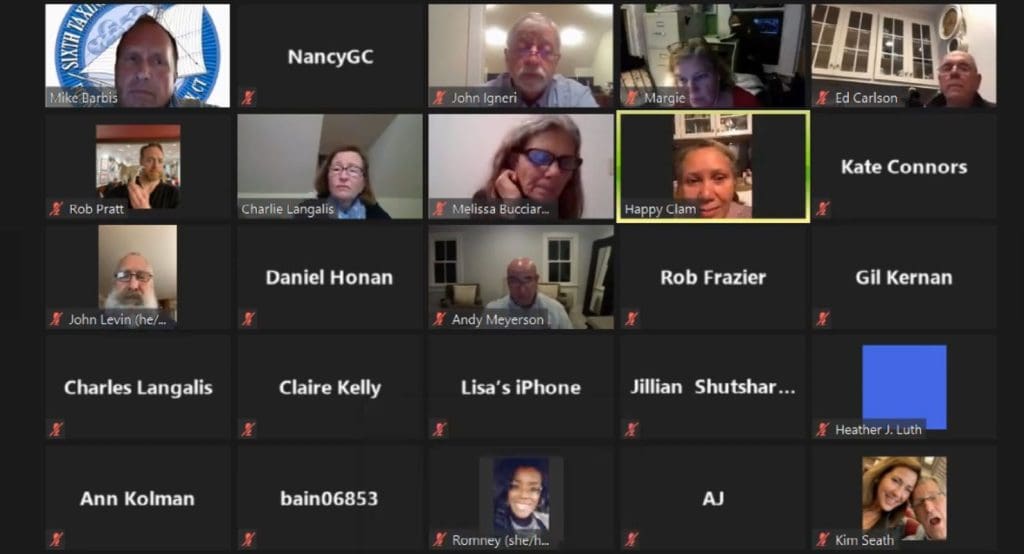 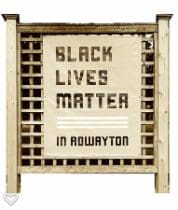 NORWALK, Conn. — A controversial Black Lives Matter sign is set to return to a prominent Rowayton location, for at least two weeks.

Sixth Taxing District Commissioners, after taking heat in a Wednesday evening meeting, voted unanimously to allow the sign to return to the “old school fence,” a type of roadside community bulletin board, until a meeting can be held for the community to discuss the sign rules. The sign had been on the fence four weeks, although the rules allow for half that, when the Commission voted to remove it in July, calling it “political” and not appropriate according to the rules. It had also been vandalized.

The matter was not originally on the District’s agenda for the evening, but Commissioners received a petition signed by 114 people, 70 of them Rowayton residents and 30 from Norwalk, Chairwoman Tammy Langalis said.

Commissioners had sent an email blast to the district’s “approximately 4800 e-blast addressess,” asking for feedback on the fence guidelines, and had gotten “about a dozen replies from people that said they liked the regulations the way they were,” Langalis said. “…We thought, you know, people weren’t interested in talking about it.”

In addition, the meeting was rescheduled hours before it was supposed to begin, moved from 7 p.m. to 8:30 p.m. Residents were notified of that via an afternoon email.

Speakers included Rob Pratt, who said Black Lives Matter does not promote specific political candidates, parties nor organizations so the sign shouldn’t be characterized as political. Kate Connors said the sign was “an important show of support for our Black neighbors, who may not feel safe enough to partake in this discussion.”

A woman of color who signed into the meeting as “Happy Clam” said “my inbox was bombarded” Wednesday evening by “mothers who were upset that they can’t attend because they’re putting their children to bed.”

“We apologize,” Langalis said, explaining that some Commissioner are attending while out of town and there were connectivity issues.

“It gives the optics that you’re suppressing meeting attendance,” the woman going by “Clam” replied. “…You guys do tremendous work, you work your butts off, and you have lost credibility because of that.”

“I’m from here, and  I am embarrassed at the behavior of people who have spoken out against the sign, the vandalism of the sign, and frankly, the way that this process has played out with the Sixth Taxing District,” she said. “I’m embarrassed because when people say what is it like being a person of color in Rowayton, I’ve always said nothing but praise. And now I’m almost under fire for living here and I’ve done nothing wrong. All I’ve done is exist in a town that doesn’t have the backbone to put up this sign.”

The City owns the fence but the district manages it, Langalis said. Mayor Harry Rilling had called the District because he’d gotten messages about the controversy, Commissioner John Igneri said.

If it went back to City control, no signs would be allowed, Langalis said. But the District is open to discussing the rules, Commissioner Mike Barbis said.

“We firmly believe Black Lives Matter. The fence, whether it’s a sentiment or not, was not really set up for that,” Langalis said. Just about every yard has a Black Lives Matter sign on it in other communities, “And I’m wondering why there aren’t more here. Why is the fence so important?”

Igneri agreed, asking if the District would also allow an All Lives Matter sign, or a sign about abortion.

“It’s not as easy as everyone thinks,” he said, asking if the District would allow a Blue Lives Matter sign.

Barbis said he was getting contacted by people who object to the sign, who “feel like they’re going to get trampled if they try to say that the fence shouldn’t be political. So they don’t want to voice it publicly.”

The Commissioners are trying to do the right thing as volunteers and don’t deserve the personal attacks they’re getting, Barbis said.

“Who knows what the next sign up there’s going to be? It’s a bit of a Pandora’s box,” Barbis said. “And I know everyone wants to draw the line here. But I’m just saying it’s a Pandora’s box and why the sign has become this demarcation point. I don’t really know.”

There are 4,500 Rowayton residents and 70 of then signed the petition, Barbis said.

Daniel Honan said he’s lived in Rowayton for two years and was disappointed because he thought the comments in the last district meeting were a slam dunk, that the sign would be allowed.

“Are we just gonna come back and complain more?” he asked, promising to return.

A woman who identified herself as “Romney” said the conversation had been “exhausting” to sit through as a black woman.

“It is incredibly hurtful and disgusting to compare Blue Lives Matter signage, because being a police officer is a job, you can take off a uniform, you cannot stop being Black,” Romney said.

She doesn’t live in Rowayton but her daughter goes to Rowayton Elementary, and having Black Lives Matter signs in yards is not the same thing as having them in community space, she said.

“I would like everyone to imagine how I feel as a black woman, and not knowing if I for myself of myself or my daughter is going to be a hashtag. Because you guys do not want to put through with putting up a sign in your community space,” she said.

“We cannot wake up not black,” the woman going by Happy Clam said. She pointed out that the Commissioners are white and suggested diversity training.

Barbis, reminding everyone that the Commissioners are volunteers, proposed that the sign be allowed to go back up until “at least we have a vote on what the rules for the town should be for the sign.” This would be an in-person meeting, he said.

“Commissioners have spent a lot of time talking about this and talking to other residents as well. And we feel your concern,” Langalis said. “… We’re responsible for district property in the city property too. So I’m willing to put the sign back up for two weeks, and I sincerely hope that it doesn’t get vandalized… We felt badly about that reflection on our community. And you know, that, that’s, it’s sad.”

Officials need to stop caving in to extreme Left intimidation tactics. Rules are rules, and a BLM sign is political, like it or not. BLM as an organization is Marxist, and advocates violence against the police and government in general. They are a huge doner to the extreme Left Democrats. A blue lives matter sign is a statement in support of the police. It is not a political organization. A better comparison to BLM would be to hang an NRA banner.

There will always be a handful of Archie Bunker types holding onto their outdated views of the world. The
rest of us, while exhausted by your intolerance and insistant whining, will continue to bat down your weak
arguments and flacid propoganda.

As mentioned in the article, police officers choose their profession. While this is often a noble call
towards serving the public, it’s still a choice, and one they are paid to fulfill.

Black people can’t just “quit” being black, and their lives have not mattered in equal measure or rights.

The global movement of communities
Independently declaring that Black Lives Matter, is not a political movement.it’s made up of thousands of independent, unaffiliated community groups with one single thing in common, the active belief that Black Lives Matter and the audacity to hope that this positive message can be stated without negation.
There is a single, ngo
whose name happens to be Black Lives Matter Llc, who may have political ideologies you disagree with. They have nothing to do with the millions of independent supporters of BLM.
This is as relavent to the issue as the Church of Satan is to your Church. Just as we don’t consider all
church’s to be in line with the Westboro Baptist’s protesting at soldiers funerals, we don’t get to assign a political ideology on account of a single groups name associations.

I know you are a real drag to be around when your kids have a birthday, when poor Tommy gets a
cake that says, Happy Birthday Tommy, you flip over the cake and scream out. All Kids Matter!

When little Susy sprains her wrist, you yell at the doctor to stop putting a wrist brace on, when All
Bones Matter!

You: Don’t judge all cops based on a few bad apples.

Also you: 2 people who founded a non profit that is inspired by the global Black Lives Matter movement have politics I don’t like, so let’s label the entire global movement that includes over 60% of Americans “Marxist”

Also you: this is a Marxist movement, and something something radical Left.

But wait, Marxism is a really specific ideology and school of political thought that has absolutely no bearing in modern day moderate democratic activism. Just saying the word doesn’t mean anything.

Also you: well I don’t know what Marxism is necessarily, or the difference between the radical left, far left, and anarchy, but I’ll just play Fox News Buzzword Outrage Victimization Bingo!

Yikes – Mr. or Ms. Norwalker, or whoever you really are – I find your compendium of false claims to be obnoxious and offensive. I was hoping another reader might offer the needed rebuttal, but I will do it. Here’s some help for you:

1) “Officials need to stop caving in to extreme Left intimidation tactics.” I attended last night’s virtual meeting. I believe a recording of it is available. For the full length of it, I could not detect any “extreme Left intimidation”, or any kind of intimidation for that matter. The Rowayton residents who attended and spoke might be interested to discover that someone now considers them “extreme Left”. What occurred was a calm, and civil, and at times impassioned community discussion – exactly what we all should hope to observe with local government affairs. The 6th TD Commissioners conducted the meeting professionally, and they were responsive and took action of their own. Not “caving”.

2) “a BLM sign is political, like it or not.” No, it’s not. Please don’t make it so. Gentle reminder: BLM stands for “Black Lives Matter”. If that’s political, then so is “Happy Birthday Kevin!”

3) “BLM as an organization is Marxist, and advocates violence against the police and government in general.” Actually, BLM is a movement; it’s effectively the contemporary incarnation of the Civil Rights movement of the 1960’s (and 1950’s, and 1940’s, and 1930’s . . .) Literally tens of millions of americans actively identify as supporters of this movement. I think you will struggle to find americans anywhere who identify as “Marxist” or who advocate violence against the police. The BLM movement now easily transcends the 3 women civil rights organizers who 7 years ago adopted #BlackLivesMatter. For many decades civil rights activists were often labeled as “communists”. Your “Marxist” label seems both trite and silly.

4) “They are a huge doner [sic] to the extreme Left Democrats.” Oy. Who, exactly, is “They”? And no data supports this silliness. And, finally, who cares? If people have money, they are free to do with it whatever they wish. Ridiculous.

So let me see. Piet Mar(ks)(X) Marxist? What about the Marx Brothers does their sly, irreverent, absurdist genre breaking-at-times comedy make them Marxists, doing their anarchist antics? I would certainly hope so.

You do know that if you click on donate while on BLM website…it goes to ACT BLUE, a Democrat PAC.

It’s been 7 years since BLM formed. Their spokesperson has said numerous times they are “a trained Marxists”.

They have raised over a billion dollars but tell me what neighborhood have they cleaned up.

How many underprivileged black children have they bought school supplies, fed the hungry, donated to a food bank?