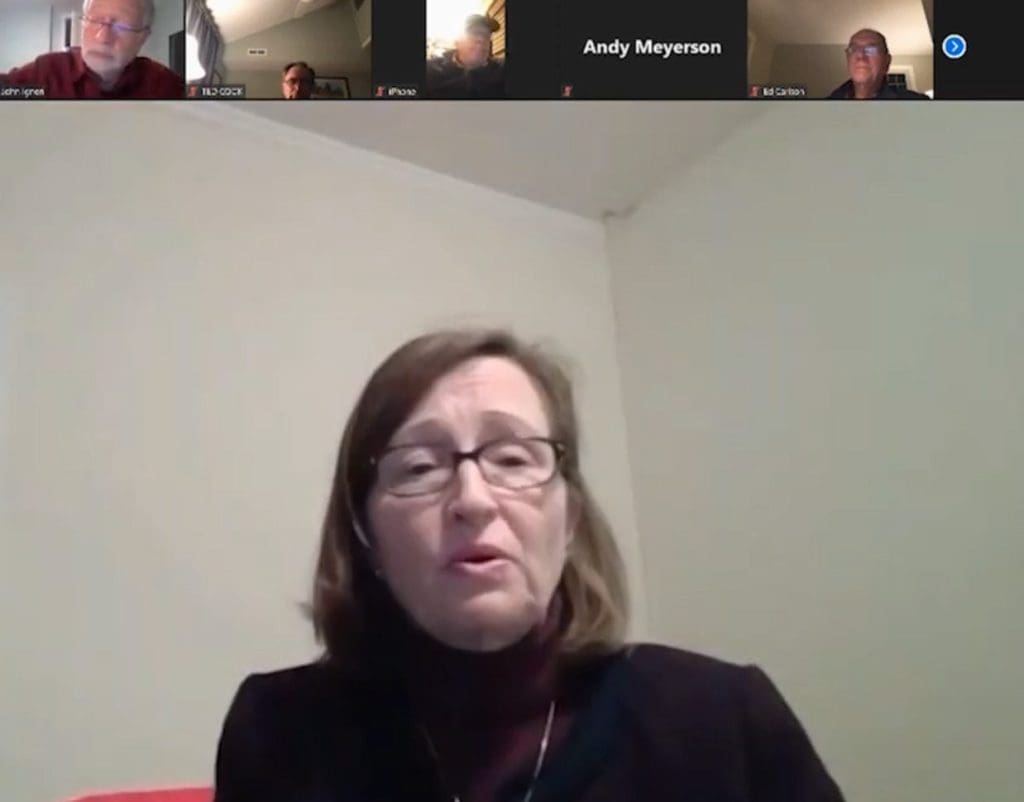 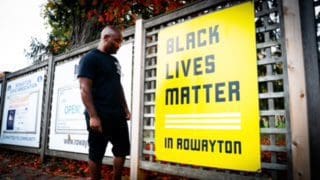 A man, said not to be a Rowayton resident, looks at the Black Lives Matter sign recently after it was re-posted on the Old School Fence. The person who sent the photo said he was “grateful for its significance.” (Contributed)

BIPOC resident asks, ‘Why is our community having such a heated debate about this?’

NORWALK, Conn. — Proposed changes to Rowayton regulations would create “a higher level of expectation of the dialogue” on the Old School Fence, a road-side community bulletin board currently mired in controversy inspired by a Black Lives Matter sign.

“We’re certainly trying to, in our proposal for policy, create ways of maybe mitigating those sorts of contentions and hopefully creating a high enough bar, where whoever wants to voice support for a particular human rights cause would need to demonstrate that they have support of at least 100 residents, that also support them putting this this up, that there’s an established time period in which it could be displayed,” Rob Pratt said Wednesday in a Sixth Taxing District meeting.

Rowayton residents who are registered to vote can cast ballots on the proposed changes to the fence regulations on Dec. 2. Sixth Taxing District Commissioners Tammy Langalis and Mike Barbis said it’s hoped that there will be more than one option.

The sign controversy erupted in July: Black Lives Matter was on the fence for about a month before the Commission had it removed, saying it had exceeded the customary two-week limit for signs. It was also thought to be political and the Rowayton Avenue fence is usually reserved for light-hearted stuff like birthday wishes and event announcements.

Multiple heated district meetings culminated last month with the Commission voting to allow the sign to return, at least briefly. Then, on or about Nov. 5, Commissioners had every sign removed from the fence.

While the Sixth Taxing District administers the fence, the property is actually owned by the City.

“We note that the City of Norwalk allows no signs of any kind on their properties.  The Old School Field Fence has always been an exception due to history and the 6TD’s oversight of the fence,” Barbis wrote recently.

Since the issue hinges on the rules for the fence, it’s suggested that the regulations might change.

Pratt’s Wednesday proposal inspired pushback from a woman of color calling herself “Happy Clam,” although she said she had collaborated on his extensive rule change proposal.

“This is the largest social justice civil rights movement in history, literally, happening now,” she said. “And our little town is saying, ‘Well, we have to abide by the rules. So we’re not going to allow it to stand.’ People are angry. And perhaps they’re not as vocal as I am, because they are afraid of reprisals. I’m just at the point where – this is about people being murdered in the street. And I can no longer be happy and joyous that we have Happy Birthday signs. And we’re trying to compare that to life or death.”

She asked, “Why is it so hard to just take a stand for people of color and allow the sign to stand when so many other towns have done it? … Every time I drive over the huge Black Lives Matter mural that’s on, you know, the main thoroughfare of Stamford and (Black Lives Matter signs in) all these other towns, I question, ‘Why is our community having such a heated debate about this?’ I mean, it just doesn’t make sense to me.” 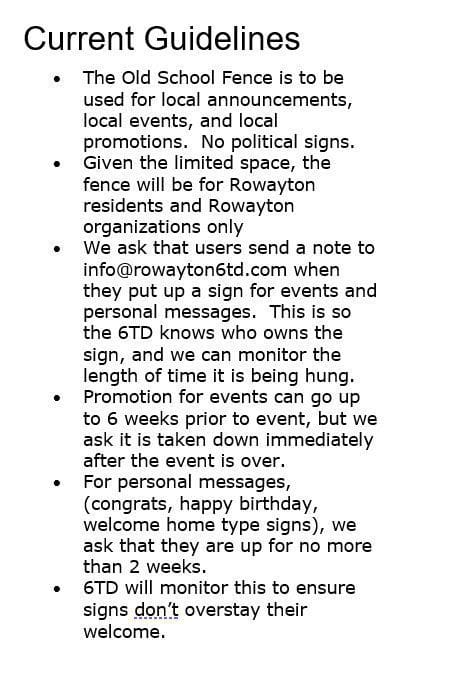 The current guidelines for the Old School Fence.

Pratt had explained, “Obviously, we respect that a lot of people don’t want to see the fence become a battlefield of ideologies… The overall feeling is that a human rights is something that’s worth voicing support for, in that these shouldn’t be as divisive as some people make them to be.”

Another man questioned his proposed rules changes, developed by a group, asking if they’d considered “highly contentious issues” that “some would consider political.”

“I would bet that either side of the abortion rights issue could get 100 people in town to sign something saying that they think that they should have a sign either for or against abortion rights, picking just one topic,” he said. “You know, I personally think that this is a big mistake … you can put something up for two weeks, that’s the rule and let it be gone.”

“Basically, we tried to structure the framework, that it’s positive supportive statements of human rights,” Pratt replied, emphasizing that the proposed changes are available for feedback.

He’s “highly supportive of the concept of Black Lives Matter,” but the Supreme Court ruled that flag burning is legal, he said.

“That’s the whole thing about free speech. I think you are crawling in a Pandora’s box and creating a giant problem for this community that that is going to go on forever,” he said.

“Burning the flag would not be considered supportive, denying, you know, people their rights in terms of choosing what happens with their body is not considered positive or supportive,” Pratt replied. “On top of that, there have to be 100 residents in town, that say, I agree in putting this statement up on the community fence.”

“I don’t understand why this issue of Black Lives Matter has come up against such pushback,” Happy Clam said, questioning the wisdom of having people come out to vote during a pandemic.

Barbis and Langalis said that arrangements can be made anyone who wants to vote remotely.

Clam suggested that the community come to a consensus without a formal vote. She said, “My fear is that history will look very poorly back on our town as closing the gates to people of color, because that’s how it’s being received by the black community, by the Latino community by people of color. That’s how it feels.”

The idea that advocacy messages on a banner have to be pre-approved to appear on the fence illustrate how fragile the Rowayton community is. Human rights messages educate, and we hope instigate and inspire people to think. When that thinking goes beyond comfort, a village evolves. .

This is a slippery slope. Instead of seeing banners featuring a bake sale or touch a truck, what’s next?