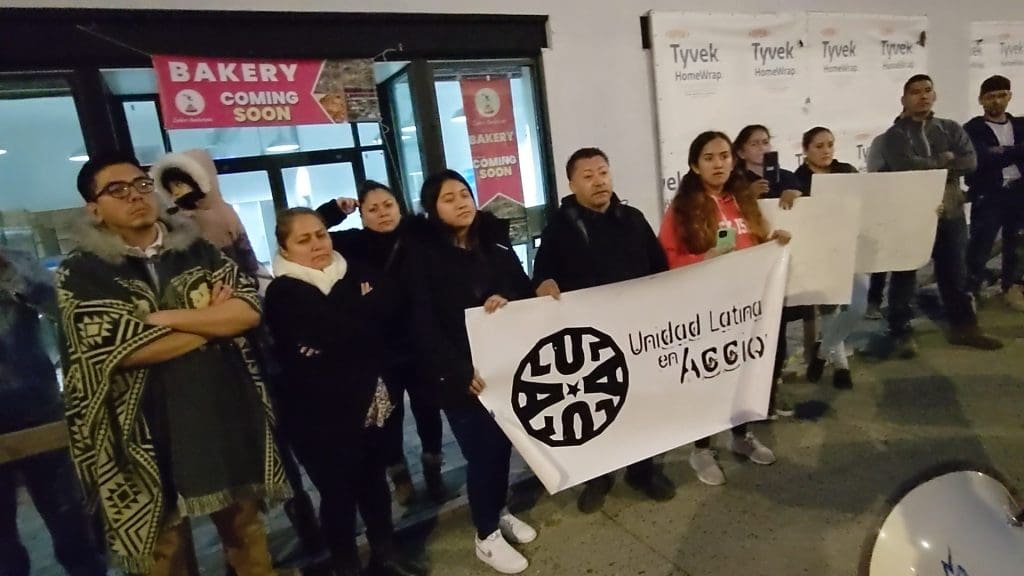 Byron Sanchez, center right, stands in front of his opened bakery on River Street as supporters rally in hopes of getting him a certificate of occupancy from the Norwalk Redevelopment Agency.

NORWALK, Conn. – Chants of “Let Byron Bake” reverberated Thursday on River Street as about 30 people gathered to pressure the Norwalk Redevelopment Agency into allowing Byron Sanchez to open his bakery there.

“It is unfair that Byron and his family had have done everything they need to do. They still got all the permits, they did all the requirements, all that is necessary they have done, and still they cannot open because of a shadow un-elected Agency that isn’t allowing them, that keeps moving the goalposts. It is not fair,” said Max Cisneros, holding the bullhorn and leading the crowd in the rally, as one of the few speakers using English.

Sanchez has invested more than $100,000 in equipment custom-made for a space owned by real estate broker Jason Milligan in the former My Three Sons building, but has yet to receive a certificate of occupancy, without which it cannot operate. City officials say the dispute concerns something Sanchez has no power over – the façade, owned by Milligan.

“I think it’s awful that my interactions with some of the city agencies and officials have led to him being punished,” Milligan told the crowd. “He has submitted a perfectly clean permit to the Redevelopment Agency. It is has nothing to do with the outside of this building, and they won’t give him permission. So it’s political. It is a vendetta. And I think if you continue to show support to him that they will find a way to let him open and they can fight their fight with me in a different venue.”

Out of that plan, and the previous plan it replaced, the Redevelopment Agency was given the authority to conduct third-party reviews of any façade work that would cost more than $50,000. Therein lies the dispute that’s caught Sanchez in the middle as he seeks to open Sabor Ambateño.

In a letter to Sanchez dated Sept. 15, Mayor Harry Rilling explained that Milligan submitted an application “to install a single new storefront window without doors on the River Street side of the 64 Wall Street building.” Rather than install a single new window, the Mayor wrote, Milligan “cut three holes into the side of the building, which far exceeded the scope of his approved permit.”

“Instead of building what was applied for and approved, the applicant illegally constructed three storefronts,” Redevelopment Agency Executive Director Brian Bidolli wrote in October. “We have requested, but not received, any other applications matching what was built outside the permit scope. We are unable to advance a project when we do not have a complete submission. The applicant has been made aware of exactly what is required to reconcile this matter on multiple occasions.”

Milligan on Thursday characterized the dispute as originating in misunderstandings, based on no Redevelopment Agency employees having long-term experience in the City.

“I’ve discovered some things that are innocent mistakes on their part that I’ve realized later. But they’ve dug in and they were embarrassed,”  Milligan said. “… When Tami left, it fell apart,”

Milligan said he didn’t cut three holes in the façade; it’s an old building and as workers excavated they found doors and windows no one knew existed. The “three holes” are actually windows that were uncovered.

Milligan said he’s not sure what he wants to do with the façade. He might bring the building out further into the sidewalk, to create more space he can rent. He described the permitting process as onerous, with multiple layers, many of them redundant.

Bidolli “feels like I lied to him. I don’t think I did,” Milligan said.

Eight other developments have gone through the design review process, including five in the Wall Street area. Milligan pointed to the façade work he did at 31-39 Wall St. and said that exceeded $50,000 in value, that no one told him he needed a permit.

In October, Jessica Vonashek, Norwalk Chief of Economic and Community Development, said, “We believe that if Jason was to go through the process, it would be $2,000 or less. We committed as a Redevelopment Agency to be able to turn around a third-party review within a three-week period of time.”

Milligan said Thursday that if Rilling would meet him at Sabor Ambateño with a promise of handing over a permit on the spot, he would gladly trade him a $2,000 check.

Rilling didn’t reply to an email asking about that. Neither did Bidolli.

Sanchez said he may have to declare bankruptcy due to the dispute.

“As soon as I open this, I can make some money and pay all my bills,” he said.

His daughter spoke to the crowd.

How about issuing a temporary CO with conditions. This has been done in the past.

Jason, may I write the screenplay to your movie? (I am serious.)

I’ve said this before I’m going to say it again the redevelopment agency should be disbanded. I do believe that Milligan did find three pre-existing windows that have been covered up in a facade change if somebody can do some historical research I’ll bet those windows or part of the redevelopment agency’s 1950s plans and have been changed a few times since then you know the plans that they’re supposedly following 70 years later another reason for its needed removal a public oversight panel for construction projects down there might be a good idea. As Milligan has done a tremendous job of restoring that area and the redevelopment agency has been a thorn in everybody’s side since before my parents were born

The irony of this situation is unreal.

I have followed the rules to the letter.

I can read the rules and show exactly how I have followed them.

I can also directly show how the Agency did not follow their rules.

I am literally trying to pin the Agency down to follow their own rules.

They are refusing, and the public parties chant in unison to just follow the rules. We need to put a big mirror in front of them all.

The Agency is not used to people pushing back or holding them accountable.

Most people just succumb and battle through the insane degrading process. Once!

Not me. I have big plans for Wall Street and my 41 properties.

I do not have the luxury of a one & done permit.

I cannot & will not put up with intimidation & a vague, insane process that is subject to whimsical changes without notification or public input.

The Redevelopment has been in Wall Street for 60 years.

You would think that is plenty of time to “Redevelop” an area.

Jason, One of these days you are just going to follow the rules. This poor guy cant open his bakery because you continue to do what you want to do. You and your partners buy up wall street with no intention of doing anything but holding the city hostage to buy it back from you at a higher price. Its getting old!

The rules I get in trouble for breaking are the unwritten ones that require cronyism.

Do you realize that city officials are the worst rule breakers of all?

I can assure everyone that my intention is not to sell property to the city of Norwalk. I don’t think the City should be buying property from me or anyone unless they plan to use it for a school or road.

They make terrible developers and landlords.

Jason is right. The city has no business buying land unless it’s for Schools or roads. Plus, they are terrible at it. Look at Tito Court. They took land by Eminent Domain before they knew they could use it. Turns out they can’t. Now we have $1,000,000 spent on land we can’t use and is off the tax rolls! How about the home at 127 Fillow St where the Mosque was supposed to go? Oh, wait, what about the parking lot behind the Tyvek Temple?

Let private developers do what they do WITHOUT city intervention.

Revolting and Trumpesque how Milligan cries crocodile tears about how mistreated he is as he flaunts the rules–oh poor me—If you think you are under the microscope maybe you should put some effort into following the letter of your applications. Milligan’s trying to leverage the breadth of his property ownership as a basis for special treatment.

The Mayor can resolve this problem with just a speed dial press on his mobile. But he’s choosing to force a minority businessman into bankruptcy. I think Riddle would solve this problem 10 minutes after being sworn-in.

You speak confidently like someone that has never pulled a permit to do anything in Norwalk.