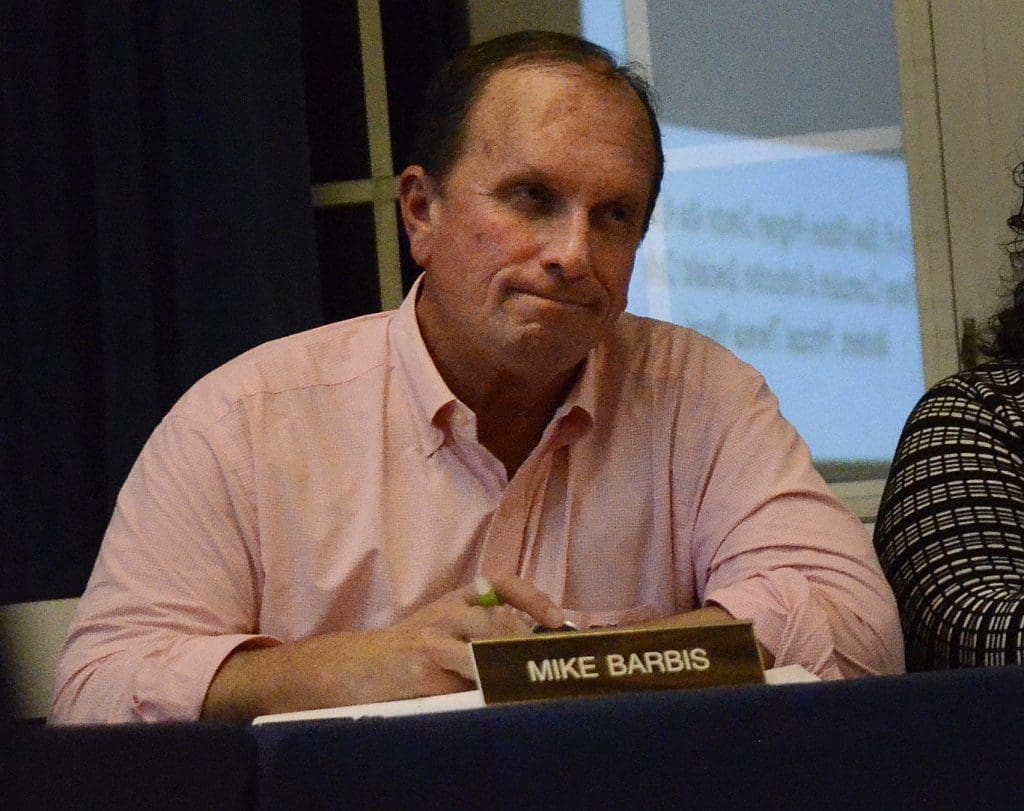 Norwalk Board of Education member Mike Barbis reacts to a NAACP member who asked if he’d been writing his resignation letter, Nov. 19 in City Hall.

NORWALK, Conn. — Get ready for a repeat of the Nov. 19 Norwalk Board of Education meeting.

“We’re going to keep it up” until BoE member Mike Barbis resigns, Norwalk Branch NAACP President Brenda Penn-Williams said on Dec. 2, although Barbis is refusing and she acknowledged that he’s unlikely to go.

With only three NAACP members at the Dec. 2 BoE meeting, it appeared to one observer that the outrage against Barbis had fizzled. But Penn-Williams had predicted that the protest would take a lull as NAACP members had a protest to attend in Stamford that evening. They’d be back in force for Dec. 17, she said two weeks ago.

On Friday, Penn-Williams circulated an email encouraging people to come but on Monday, she explained that she doesn’t want to take folks out of their cities this close to Christmas. Weather depending, she’ll seek a big crowd in January or February, she said. ] 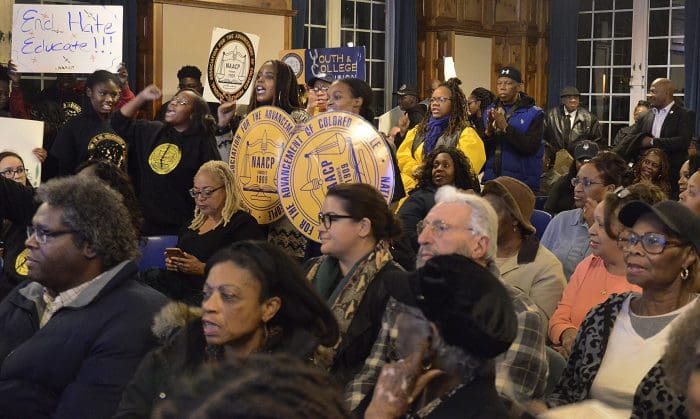 The calls to oust Barbis are inspired by his profanity-laced June 5 email, ending with the phrase “Blacks f— Latinos,” sent to Penn-Williams three days before the election. Calls for Barbis to resign from the Board of Education quickly ensued and escalated into the unruliest BoE meeting in years. It began with out-of-town youth circling the City Hall community room and chanting as new Board members were sworn in; that was followed by more than two hours of public speakers, most of them condemning Barbis. Some people present thought it might become violent. While that didn’t happen, Norwalk Police did enter the room to deal with a citizen who refused to give up the microphone.

The speaker, Donna Smirniotopoulos, began by asking protestors to get their boos out of the way, leading then-Board Chairman Bruce Kimmel to agree with those jeering her that she had started it. After four minutes, Kimmel told her she’d exceeded her time only to have her repeatedly assert that she had prepared remarks for three minutes.

Kimmel kept most speakers to three minutes. Bruce Morris was allowed to speak for nearly four. Scot Esdaile got six. John Mosby, who routinely presents a problem for elected or appointed officials as he refuses to adhere to a time limit, spoke for seven minutes, only getting up to leave under prodding by Ernie Dumas and Bruce Morris. Lisa Henderson spoke for seven minutes, first reading a letter from former Board member Sue Haynie, then speaking for herself.

She was booed a few times but did not inspire the level of vitriol encountered by Smirniotopoulos.

That became the only meeting presided over by Kimmel, who cited health reasons when he resigned from the Board six days later. The Board has elected Sarah LeMieux as temporary Chairwoman, until March 3. She immediately sought to calm the public by assuring them that Norwalk Public Schools is doing fine, in spite of the Board meeting turmoil.

“We are a mechanism for setting policy and providing oversight,” she said. “I don’t want to diminish the work that we do. But fundamentally, we’re a backstop and the real work of Norwalk Public Schools is done by our wonderful teachers and our peer educators in the classroom, our personnel, our administrators and our schools and our staff and our leaders in Central Office, and all that work is supported by volunteers and our PTAs, PTOs, School Governance Councils and all of that work has been humming along undisturbed. Children are learning to read and make music and do algebra and world history and they’re excelling and they’re doing great.”

Penn-Williams on Dec. 2 said she might have more people at Tuesday’s meeting. She’d been getting phone calls from community members who weren’t there, were pleased by what happened, and planned to go to the next meeting. “They are very happy that we as minorities are finally getting together on the injustice that is going on.” 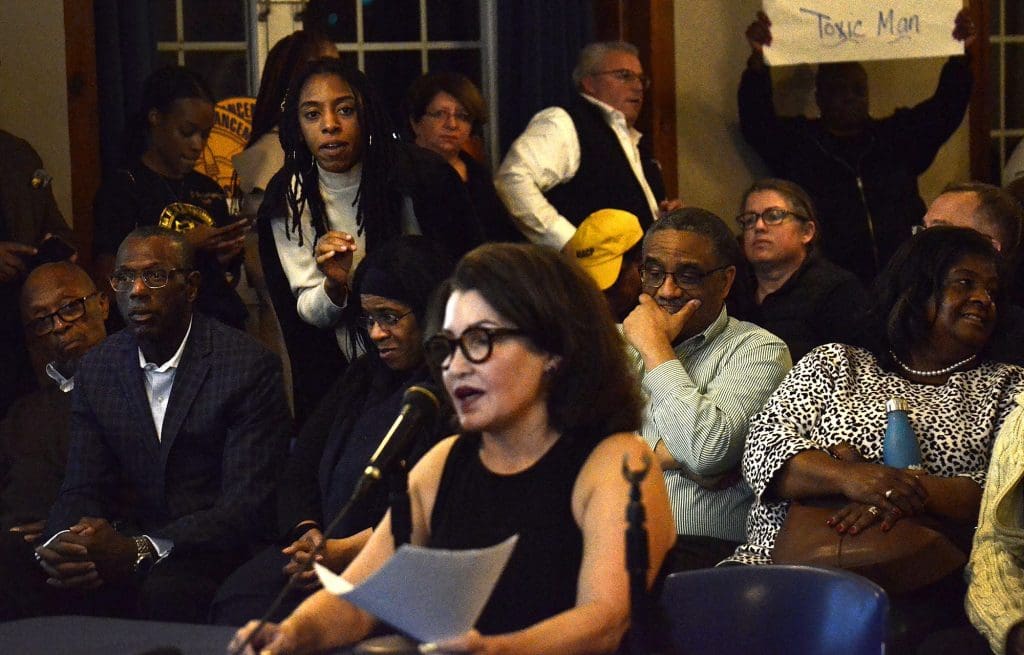 Diana Révolus, left, stands to reprimand Donna Smirniotopoulos, front, for refusing to give up the microphone. At that point, Smirniotopoulos had been in front of the crowd for nine minutes. 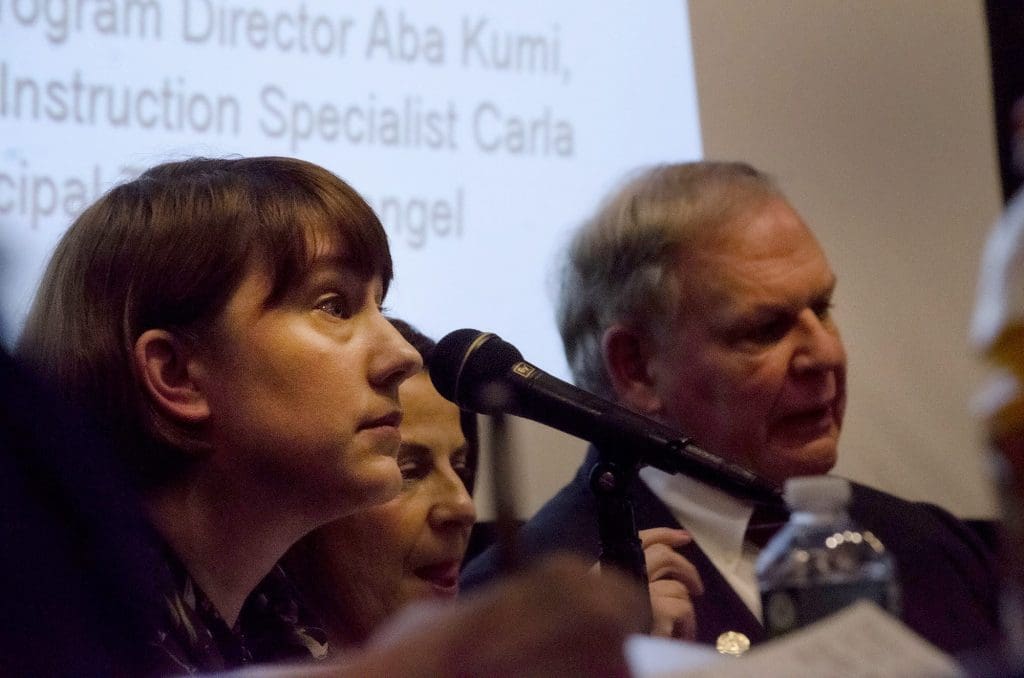 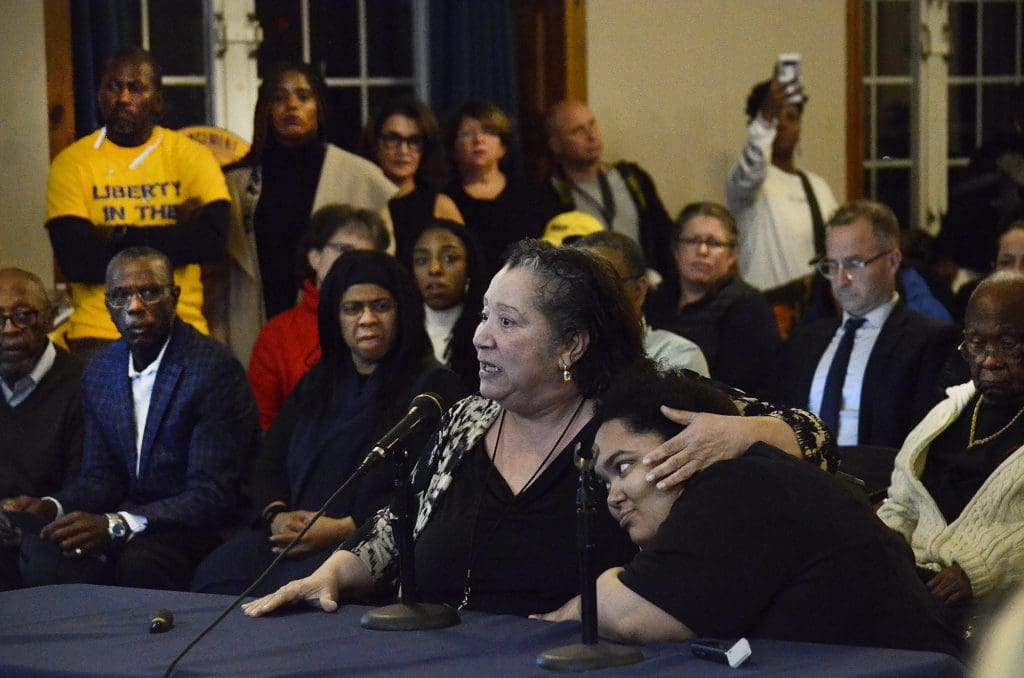 Former Board of Education member Migdalia Rivas cradles her daughter as she describes what she said was discrimination against her when she was on the Board. 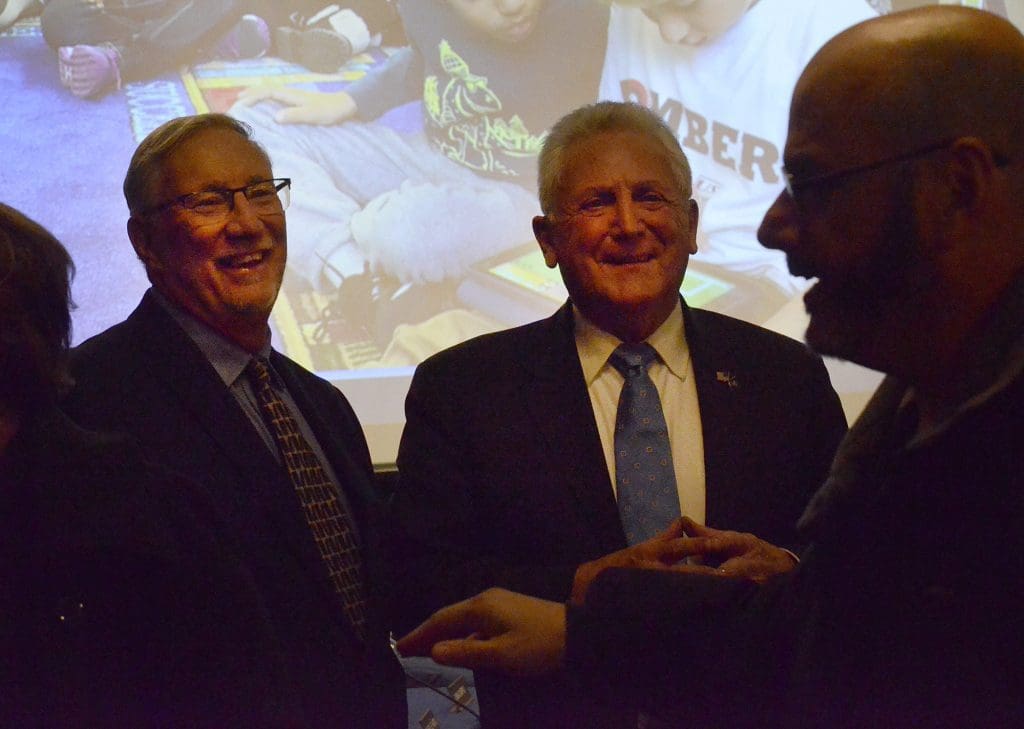 From left, Town Clerk Rick McQuaid and Mayor Harry Rilling enjoy a moment before the meeting begins. Rilling presided over the election of officers and then went upstairs to the Common Council meeting. He did not return. 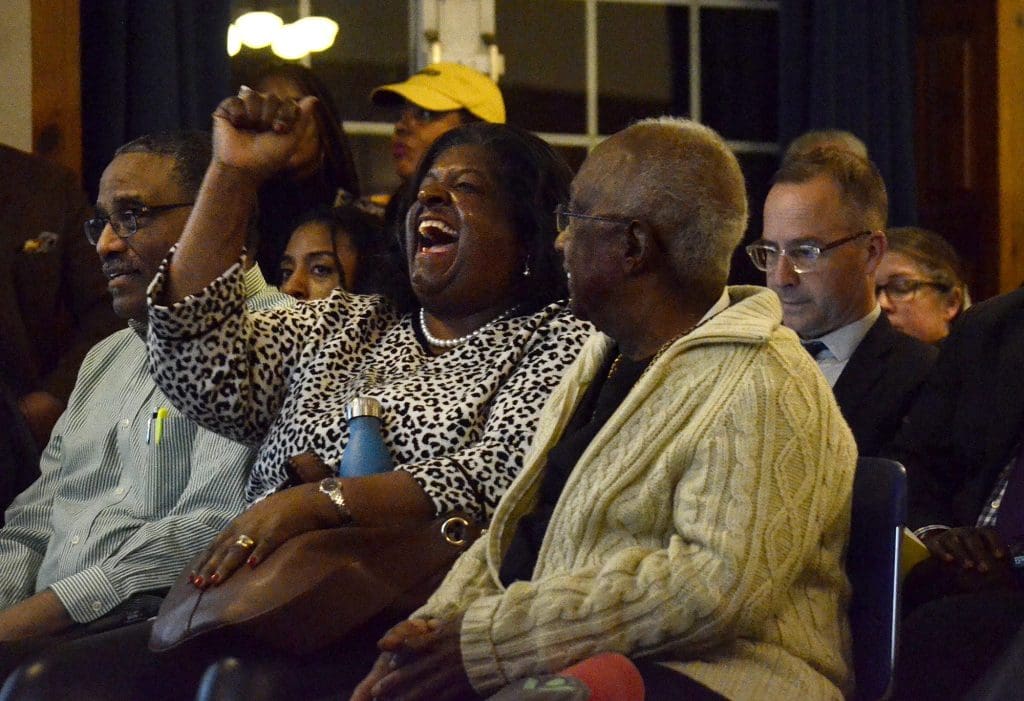 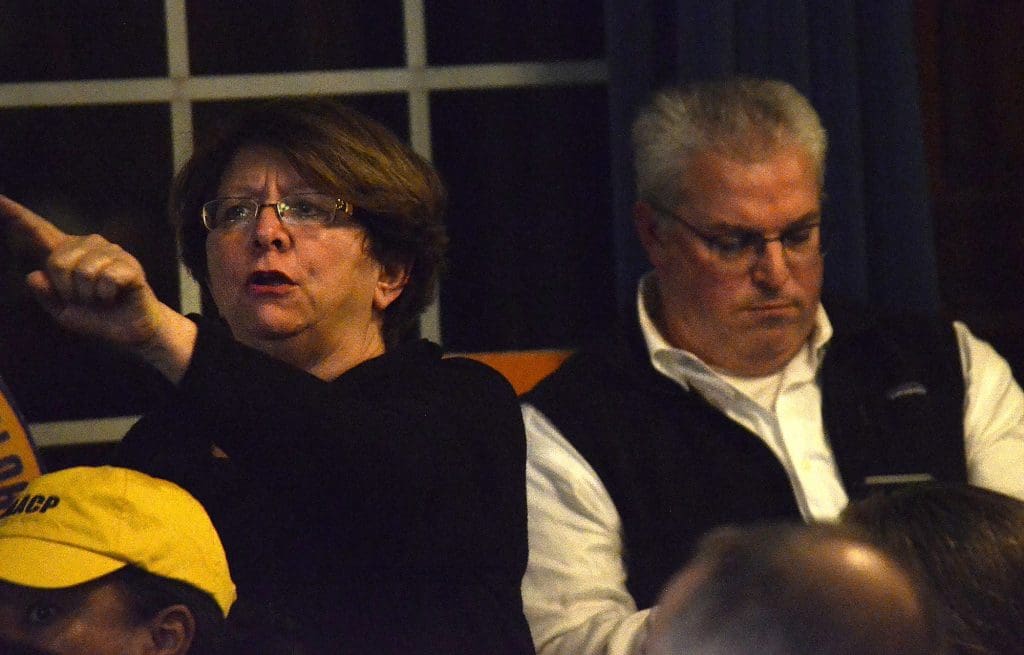 Lisa Henderson, left, calls out to Board of Education member Barbara Meyer-Mitchell, accusing her of smirking. Meyer-Mitchell later told NancyOnNorwalk that she had been encouraging the young person at the microphone. “I always try to be supportive of the young people who come to speak to us, as it takes an enormous amount of courage,” she said. 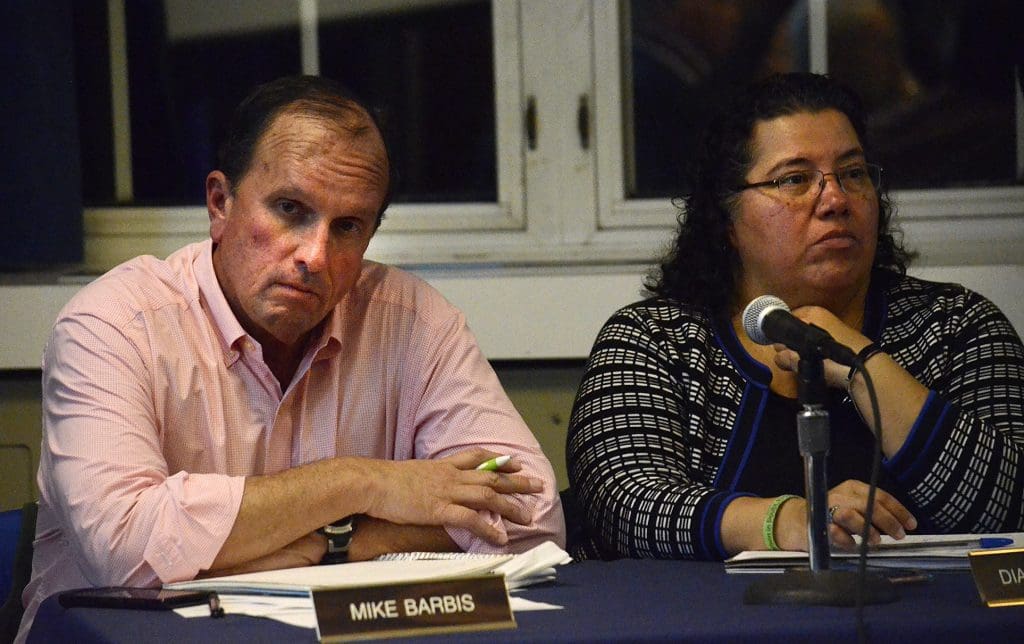 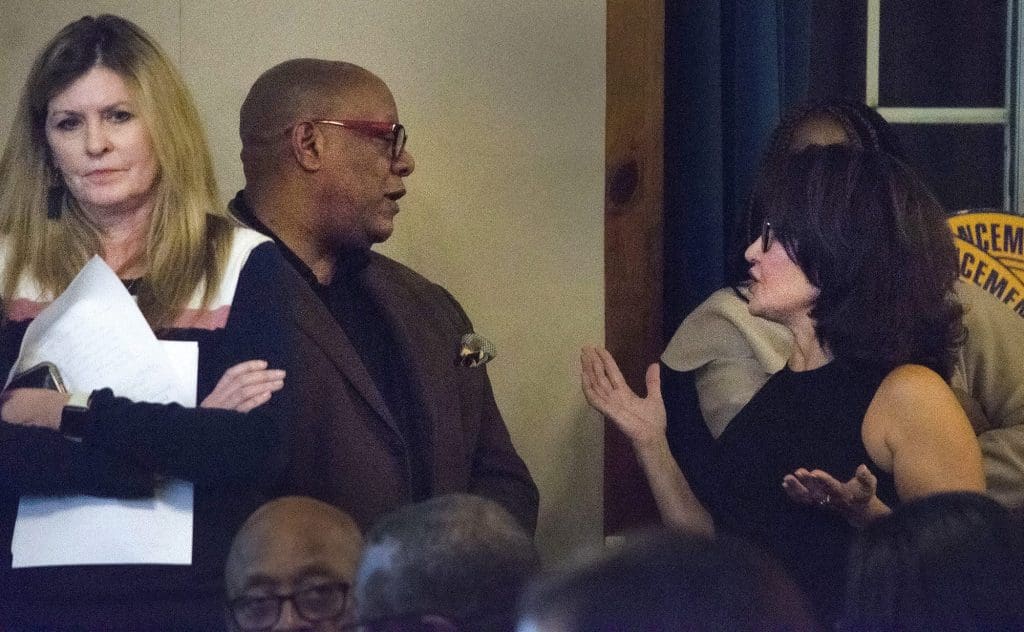 From left, Nora King, Scot Esdaile, President of the NAACP (National Association for the Advancement of Colored People) and Donna Smirniotopolous. 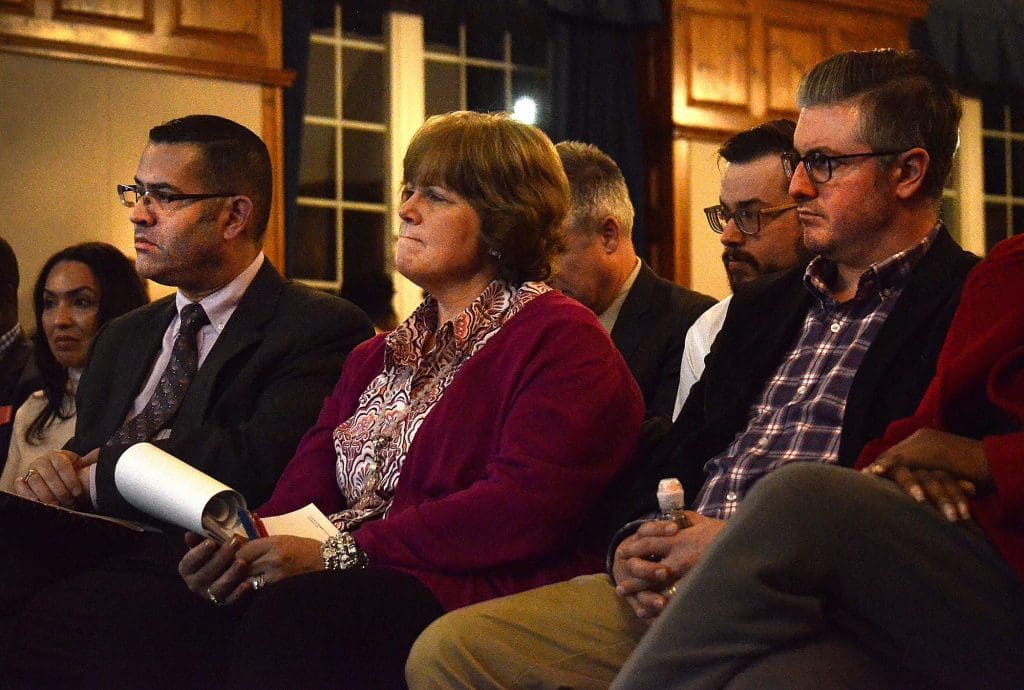 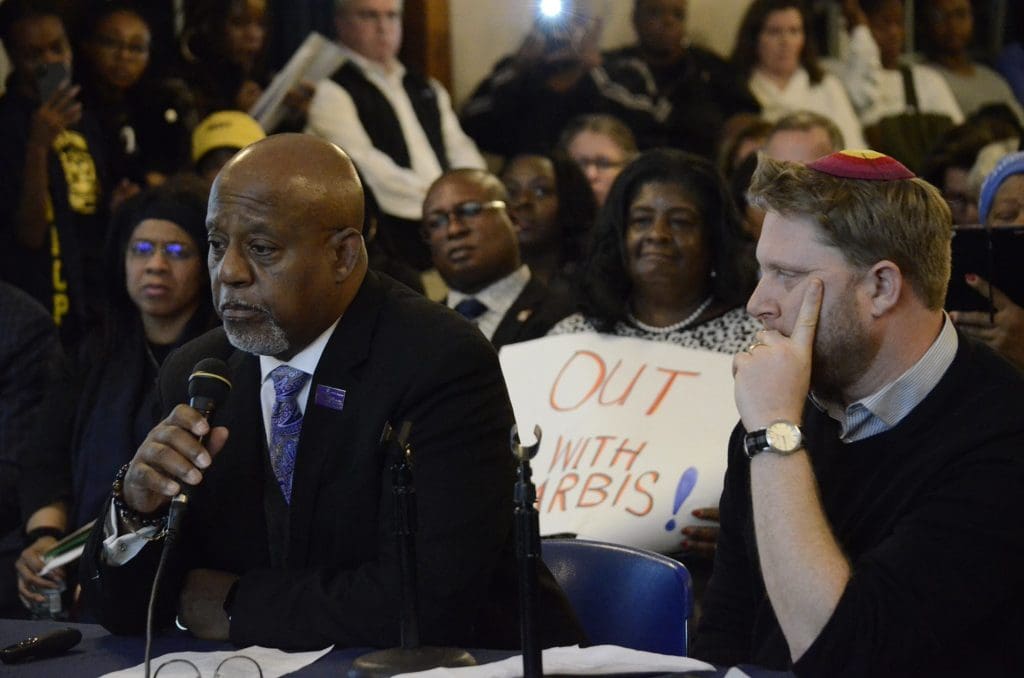 From left, the Rev. Lindsay Curtis and Rabbi Jason Greenberg make a joint statement. They spoke for four minutes. 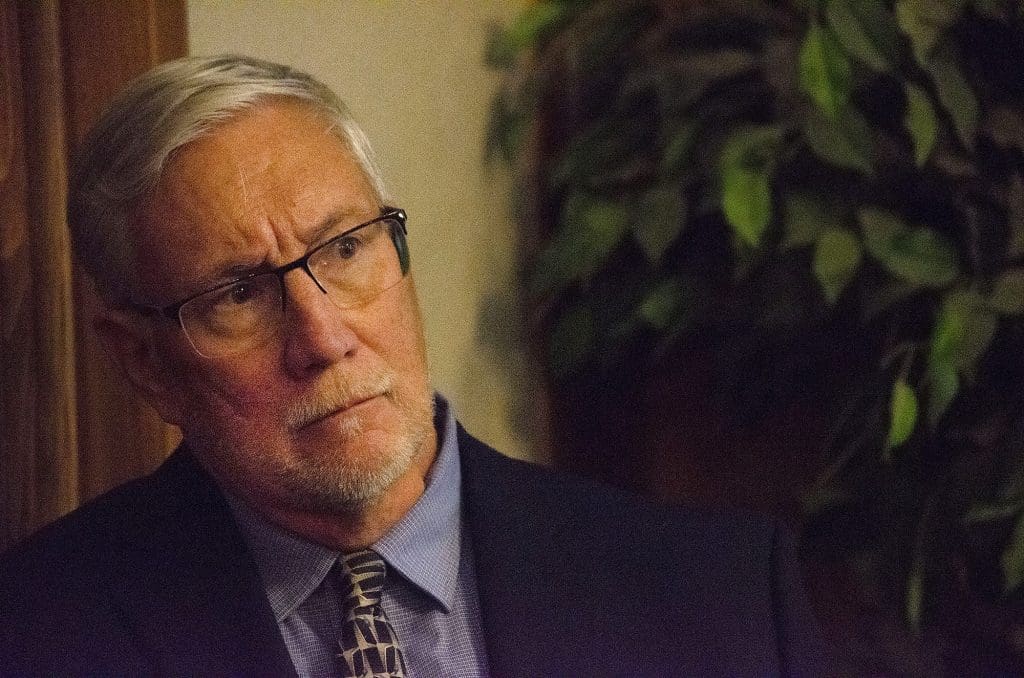 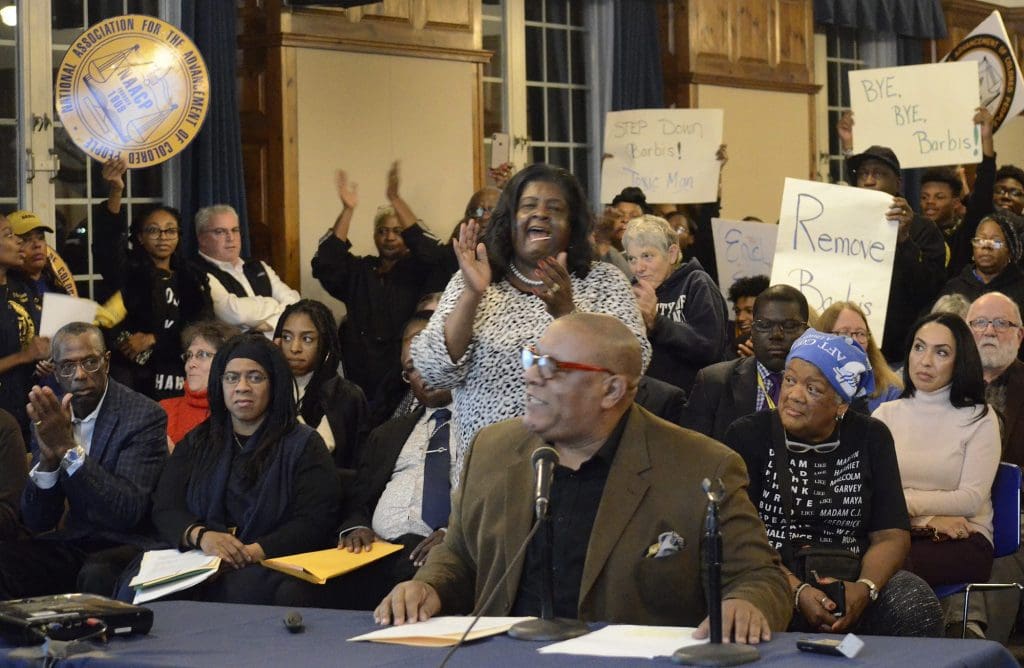 The crowd reacts to comments by Scot Esdaile, President of the NAACP (National Association for the Advancement of Colored People).

NON, is this ‘news’ or are you just trying to keep it alive?

Where is the anger at a Rilling administration and DNC that made Norwalk’s mayoral election about race-baiting when they feared that the race was getting too close?

This is political theater by Norwalk politicos that don’t like Barbis and don’t like that they can’t control him and/or those that haven’t liked Barbis for years for reasons totally unrelated to this issue. This is payback, nothing strategic going on here. What Mike said was stupid, but not racist.

Mike Barbis, stay strong. You are a good man and your voice is needed on Norwalk’s BOE.

When I stepped down from the BOE, I noted it was because of personal, political and health reasons. Health was not the only reason.

@Sue Haynie. No one could have used it, if it was not sent. Rilling’s base is wrong as two left feet, but so was Barbis for the race baiting, hateful words he used. You may not be offended by his words, but many are. He needs to step down so the city can heal.

@Sue Haynie
I really appreciate your comment because it is a spot on view of the situation. This is political theatre at its worst.

I want Mike Barbis to stay on the BoE because he has and independent voice, he can’t be intimidated, he has done more work than anyone (except the superintendent) in this city to see that new schools are built, he is not a pushover when it comes to union negotiations, he possesses a knowledge and history of the workings of the NPS that others don’t. I believe these strengths are the underlying reasons for the push to get rid of him by the Democratic leaders. He is needed on this BoE now more than ever.

The language Mike used in that email was not appropriate but it wasn’t racist. He was utterly frustrated with personalities involved and frankly I don’t blame him. Mike also directed his frustration towards white men in that email as well but that isn’t part of the narrative. The narrative has been sewed. The mayor and others who received the email expressed no concern for months until it was mysteriously exposed days before the election.

I don’t know why NoN gives Brenda Penn Williams so much press time. She has a talent for race baiting but is completely ineffective in securing real educational influence that leads to positive outcomes for students. She has a history of targeting individuals as racists and her overuse of this tactic doesn’t help her cause. I believe that the NAACP has a great mission…. “The mission of the National Association for the Advancement of Colored People (NAACP) is to secure the political, educational, social, and economic equality of rights in order to eliminate race-based discrimination and ensure the health and well-being of all persons.” I believe Brenda Penn Williams does more to hurt the mission of the NAACP than to help it and that is tragic.

I am outraged at the Rilling administration, Camacho, Duff and others on Norwalk Democratic Town Committee. There’s a long history of this groups involvement in cries of racism and the use of race baiting. It’s a very effective distraction that thwarts the dialogue that needs to be had about things like the ELL crisis, plans for new schools and funding issues.

I wish NoN would focus on asking our so called leaders — the “Fix it First” team Rilling and Duff the tough questions. We still have no details about how ELL crisis will be funded and managed. Do they still embrace their sanctuary policies that led to this ongoing crisis? What are the real costs of building the new High School they have planned? Why was the plan for a new high school not vetted with BoE members and the public? Why did they decide on a high school when that was not a priority of need determined by the BoE? How will they address the priorities that were outlined by the BoE? How much will their plans cost tax payers? Why would Camacho give us such insulting choices for Kimmels replacement? Please — I want answers to these questions Nancy! I want you to dig deeper into these issues because the plans they make are going to cost us taxpayers big time.

I don’t blame Bruce Kimmel (Mike Barbis’s replacement) for his resignation as Chairman of the BoE. Bruce said it wasn’t just health issues. I was thinking he would be the next scapegoat after Mike Barbis. Mayor Rilling demonstrated he would not support him. I heard Rilling met with NAACP members the night before the November 19th BoE meeting. Protesters were screaming Rilling promised to make Ms. Harris the Vice Chair. Rilling fanned the flames of controversy and left for dinner as his “beloved” city burned that evening. Bruce knows Rilling and how his cronies operate. Bruce was in a no win situation. I think he clearly was disgusted and rightfully so. He not only resigned as chairman of the BoE but changed his political affiliation.

@Joanna – I’m still not sure about Barbis, BUT everything else you mentioned is right on. I would think NAACP would be showing up to find out why all this money Rilling is coming up with for ELL crisis wasn’t designated to support NAACP supported programs originally. Those funds are being allocated to new students who may or may not take root in Norwalk. Meanwhile, poor families who’ve lived in Norwalk for generations are getting short changed. It still baffles me that we haven’t heard much from Brenda on that point. But I’m still learning about Norwalk politics.