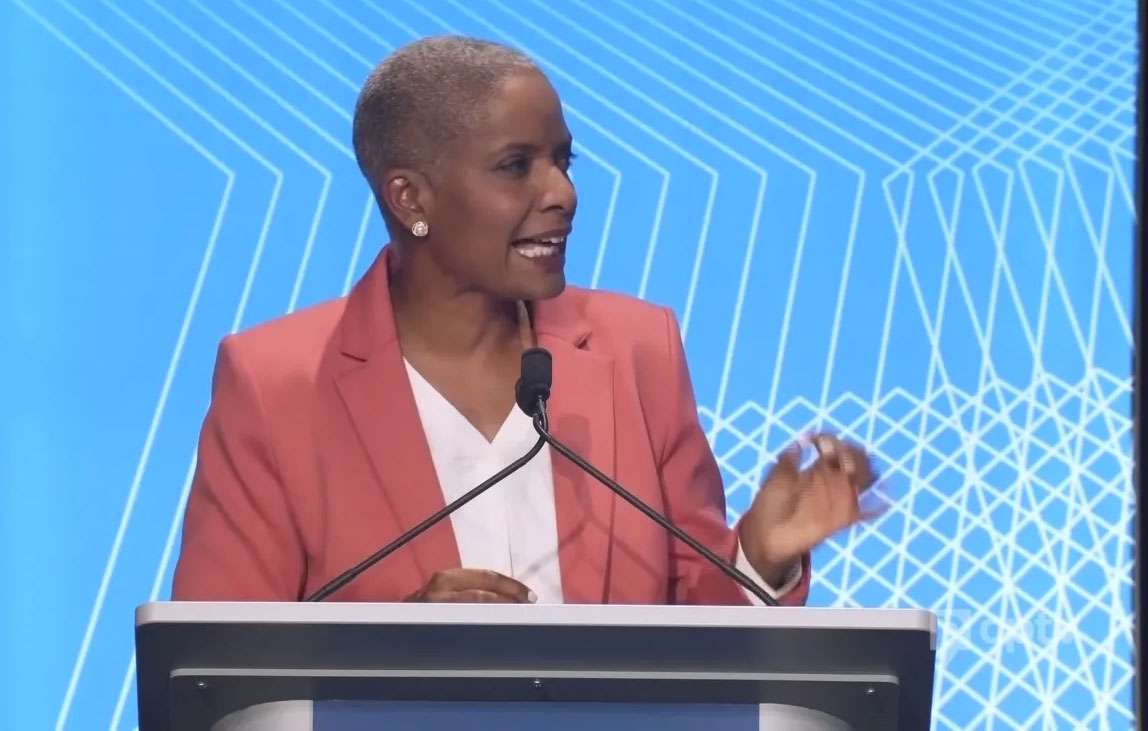 Secretary of the State Stephanie Thomas, a Democrat, during a debate at the University of Hartford last fall. (CT Public)

Secretary of the State Stephanie Thomas made her first policy recommendation Thursday, urging legislators to pass a law authorizing 10 days of early voting, beginning with the 2023 municipal elections.

One of only four states not allowing early in-person voting, Connecticut is primed for change after the passage in November of a constitutional amendment striking a prohibition against expanding the days of voting.

“You now have the important task of shaping legislation that provides increased access to voters, creates minimal strain on our municipalities and election officials, and is easily understood by the public,” Thomas wrote to lawmakers.

Thomas, a supporter of early voting who was elected in November and took office two weeks ago, made her recommendation in a letter to lawmakers attached to a state-by-state study of early voting commissioned by her office.

The study by the Center for Election Innovation & Research found that the length of early voting in statewide general elections ranged from three to 46 days, with uniform standards in some states and town-by-town flexibility in others.

“These periods can begin as early as 50 days before election day or as late as only five days in advance,” the study found.

A half-dozen bills concerning early voting already have been referred to the legislature’s Government Administration and Elections Committee. They would authorize as few as two days and as many as 14.

The center offered four models for Connecticut to consider, with early voting periods of six, nine, 10 and 14 days. Hours of voting could vary based on the size of a community, with one central polling place.

Whatever model is adopted, Thomas urged lawmakers to provide state funding to cover the added costs to municipalities.

“It is imperative that any program be fully funded by the state to cover the costs of training materials, staff time, ballots and envelopes, chain of custody storage equipment, municipal technological upgrades, and any other incurred expenses,” she wrote.

Thomas could not be reached for comment Thursday night.

“The report itself is very helpful in bringing together all the practices and laws that different states have adopted,” Blumenthal said.

The committee has yet to hold a substantive meeting. A first task will be to draft one or more versions of an early voting bill and schedule a public hearing.

Thomas has asked for final passage by the end of March to allow municipalities time to prepare. The GAE committee has a deadline of March 29 for reporting bills to the floor of the House or Senate.

I don’t agree that we need early voting. Look at what we have today, the majority of Americans believe that voting is rigged. Say all you want about disenfranchisement for the select few. The current process disenfranchises us all. I don’t care if you are Democrats or a Republican, believing your vote either does not count, or counts doubled, can only lead to chaos as it pits faction against faction.

France, a country of over 80 million, did away with machine and early voting, write in voting etc. and went back to voting in one day, on paper ballots. They have been doing that for well over a decade now if not longer. Everyone knows the outcome by around 10:PM that day. The huge plus, the French believe in the integrity of election.

Consider that the number one issue that defines our current state of political animosity is free, fair, open and accountable elections. Everything else is down stream of that. The paper ballot system used by France, and which used to have, is the best system to achieve that. It gives the power to the people.

Ms. Thomas is pushing an agenda that keeps power from the people. That is not a R or D thing.,

It’s not early voting that bothers me. I support it. It would give an opportunity to canvassers to get out the vote. Something the Democrats are very good at on Election Day and the Republicans, frankly, stink at. It would be nice to have more time in between busy work schedules to remind neighbors to vote.

But we can’t have a system like Arizona where early voting guarantees late voting. Nothing good comes of late voting except the losing party feeling disenfranchised. Like that year Bridgeport Mayor Bill Finch publicly stated that his city would deliver for Governor Malloy and voila, the polls had to stay open a few extra hours that night due to “administrative” oversights and sure enough Bridgeport was the difference that year. Waterbury, Hartford, New Haven have all had their turn.

Whatever the case may be, let’s be honest with ourselves. Those in power really don’t want a system of free and fair elections. They want one that can be massaged and guided. Prove me wrong otherwise when we have a system that doesn’t require town clerks to forward death certificates to the registrar of voters everywhere. One that has constant snafus every year with ballot shortages, wrong voter rolls sent to wrong precincts, machine malfunctions, etc…

We have figured out how to sell 500 million lottery tickets in a day and tell you where the winning ticket was sold inside of 15 minutes down to the street corner. We’ve figured out a way to file 100s of millions of tax returns and secure mortgages and credit and college entrances on line all with proof of residency. We have a national identification system in place via the Social Security Administration. Treasury and SSA are using credit report verification systems to transact on line.

I hear your comments @Michael but there are a few things worth noting.

1. In France, Election Day is on a Sunday
2. In France, you’re automatically registered as a voter when you hit your 18th birthday.
3. In the U.S. there is no federal law requiring a business to provide for time to vote. This is doubly an issue for the many disenfranchised that are forced to work multiple jobs.

So IMO, until the federal government addresses these issues, then it is incumbent on the state to rectify then in ways they’re able. That includes giving flexibility on timing and methodology.

Bryan is correct. This is about keeping those in power – in power. Nothing else.

I think your 3 points are eminently solvable, and in reality, they pale in comparison to the disenfranchisement we all experience under the current system. In fact, I find it amazing that this is even being floated, particularly in light of the Hunter Biden issues and mainstream media’s cover up of the same.

Brian nails it, this is not a Dem/Rep thing, the powers that be (left and right) are not interested in free, fair, open and accountable elections.

It’s hard to watch so many people having the wool pulled over their eyes.

Re: Comments
As to Tabulator malfunctions – the Tabulators are old and long-overdue for replacement. They can jam, or fail to accept ballots due to mechanical malfunction, but if they take ballots, they count them correctly. They are tested and serviced annually and the electronics and scanning work fine.
As to Ranked Choice – the current Tabulators are not designed to handle that. Hopefully new ones will be able to do so and then ranked choice voting can be considered.
As to Open Primaries – they are legal and the two major political parties can have them if they want them. However, primaries where the two (or more) top vote-getters, from whatever party or parties are on the ballot in November (Like California or Alaska) would require legislative action.
Bridgeport and Hartford are heavily Democratic cities by voter registration. It is hardly a surprise that they vote that way. However their turnout is low. Norwalk, a much smaller city than either, had more people vote in 2022 than either of them. We were second in total turnout, after Stamford. Our civic-minded citizens should be congratulated.
Stuart Wells, Registrar of Voters

@Patrick and I have a rare point of agreement.

@Brian, I don’t give a **** whether “the losing party feels disenfranchised”, because guess what? Your FAILED two-party system leaves the REST of us feeling disenfranchised.

Not to mention these off-year local elections we have, which depress turnout.

Put your money where your mouth is, Bryan. Let’s have some REAL democracy in our state and city.