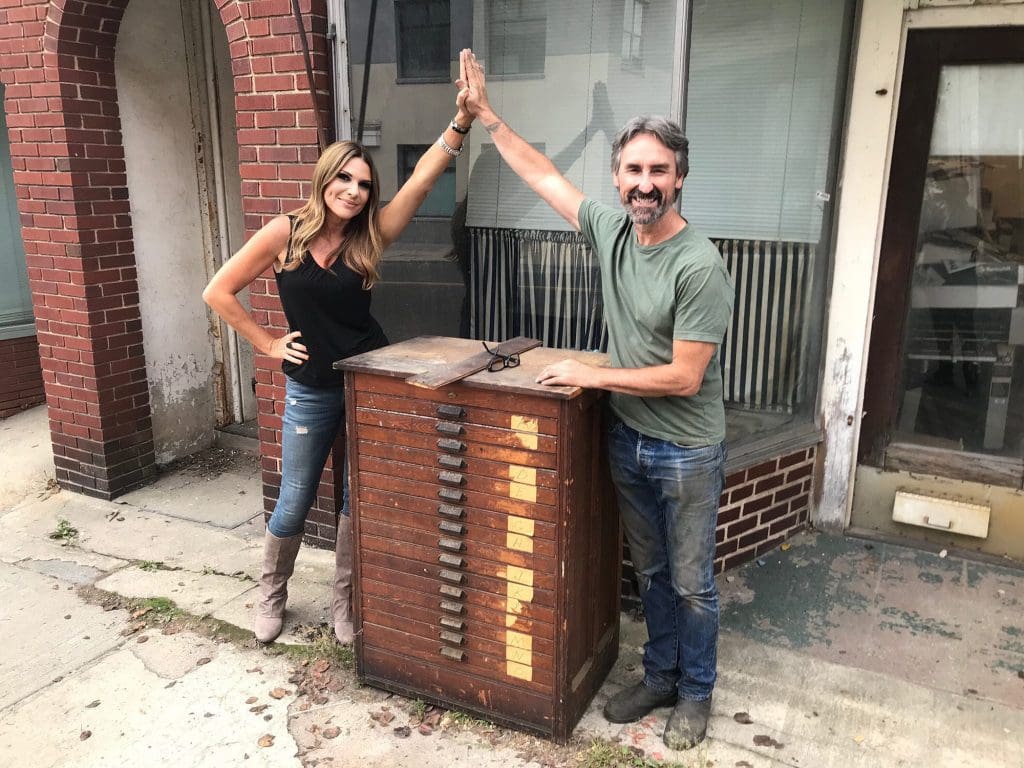 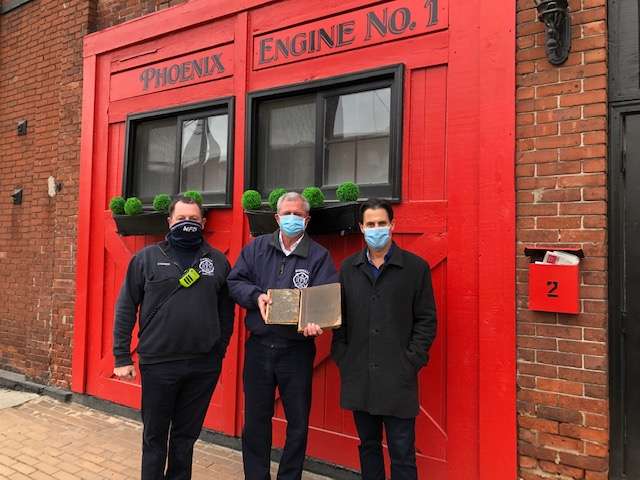 Norwalk’s historical Hour Press Building will be featured in an episode of “American Pickers” on The History Channel at 9 p.m. Monday Jan. 25, according to a press release.  Said to be more than a century old, the edifice provides fertile territory for the series’ stars, two partners who travel the U.S. in search of forgotten antiques.

Located at 10 Commerce St., The Hour Press Building housed a cigar factory in the late 19th century, according to its recent purchasers, Nathan and Gloria Dillard.  Previous owners, the Bredice family, had saved the building’s entire contents from the time they bought it in 1930.  “The first time I walked into the building, it was amazing to me what an untouched time capsule it was,” Nathan Dillard said. 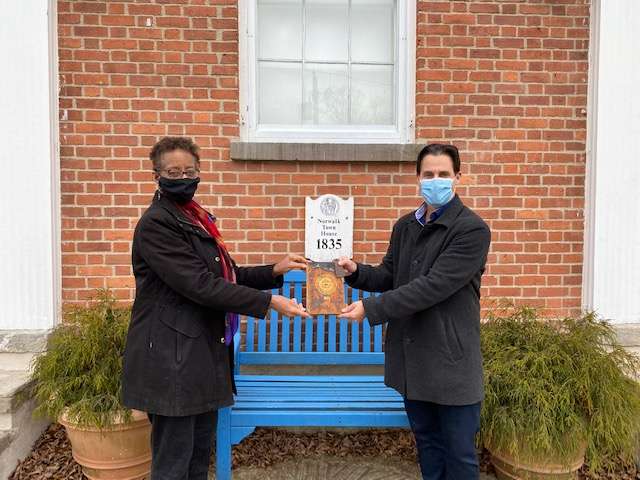 The Dillards, being 15-year Commerce Street residents who renovated their street’s Phoenix Engine #1 Firehouse as well as the former John Keena Family Grocery, commemorated the “American Pickers” episode by making two donations in memory of the Bredice family: a room key thought to be the sole remaining artifact from the pre-Civil War Norwalk Hotel (which stood on Wall Street until its 1925 demolition) was presented to the Norwalk Historical Society, and Phoenix Firehouse minute books circa 1860-1870 were presented to the Norwalk Fire Department. 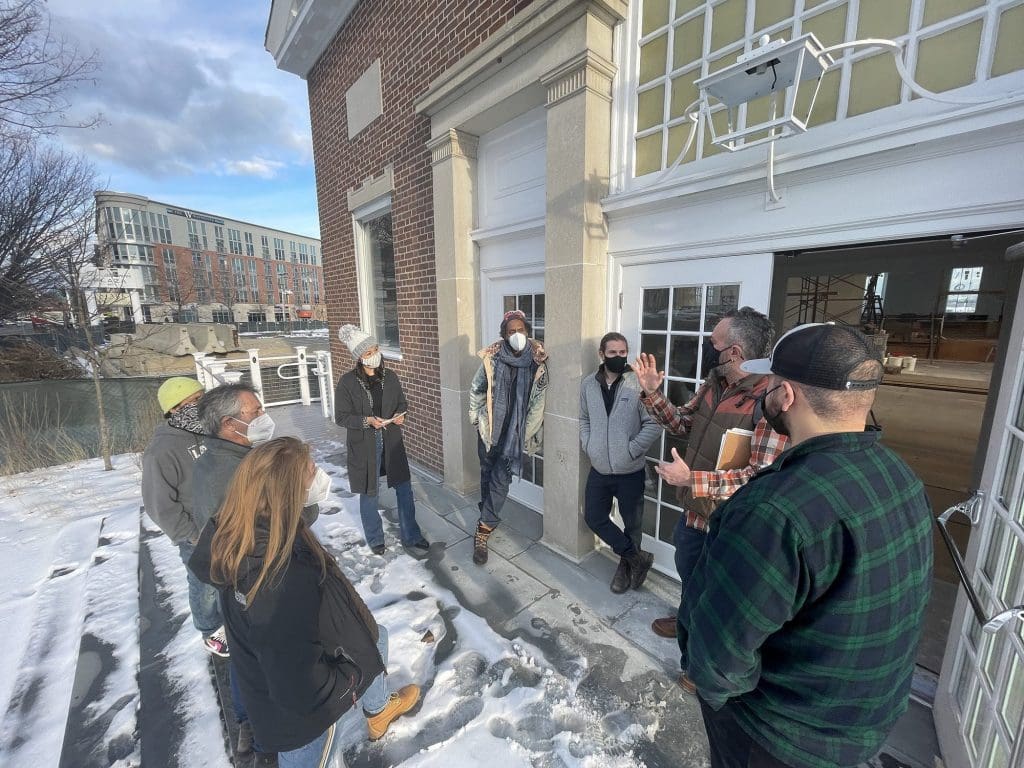 A recent gathering at The Norwalk Art Space. (Patrick Sikes) 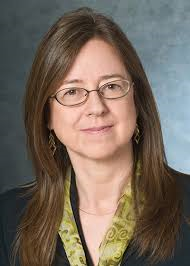 The Norwalk Art Space, a new facility opening this spring at the corner of West Avenue and Butler St., invites artists to apply for a one-year residency or a one-year Korry Fellowship (named for the Art Space’s late founder and benefactor Alexandra Korry).  Four selected Resident Artists will get free year-long gallery exposure plus a 300 square foot private studio space “in exchange for teaching a weekly class to art-oriented high school students who would otherwise have limited access to art education,” Art Space director Duvian Montoya said in a press release.  Four Korry Fellows will serve as mentors whose work will be highlighted in major Art Space gallery exhibitions.

Applicants are also sought for 2-year terms on the Art Space’s steering committee, which will meet quarterly.

Criteria for selection are said to include “the artist’s body of work, potential for growth, interest in teaching and teaching aptitude, ability to activate the Space, reputation in the community and interest in working with youth.”

Deadline to apply is Feb.1.  The application, and further details are said to be at https://www. thenorwalkartspace.org/artist- residency.

Westport resident Alexandra Davern Korry (1959-2020) conceived and built the Art Space for artists and the public to enjoy for free.   A fast-track Wall Street attorney with humanitarian instincts, Korry took part in numerous battles for social justice, most notably spearheading the successful push to abolish solitary confinement of youths and young adults in New York City jails.  The Art Space will reflect her altruism and artistic sensibility.

Free “Liquor Stickers,” for deterring underage alcohol consumption at home can be obtained at participating Norwalk liquor stores, according to a press release from substance misuse prevention agency The Norwalk Partnership. When the Liquor Sticker is applied to the top of a wine or liquor bottle, a seal is created which then must be broken to access the beverage.

The Norwalk Partnership states that in a 2018 survey, 40 percent of Norwalk high school juniors reported alcohol use in the past month, compared to 30 percent statewide.  For Norwalk’s freshmen, it was 26 percent versus 15 percent statewide.  Local focus groups last fall are said to have revealed that most underage drinking occurs in homes.

Under Connecticut’s “Social Host Law,” the maximum penalty for adults upon whose premises underage drinking occurs is a $2,000 fine and a year in jail.

A wealth of information about The Norwalk Partnership is at www.thenorwalkpartnership.org

Cool information about Commerce Street. I never noticed the beautiful historical buildings until recently on a walk. It’s good to know the story behind it.

Pickers should have stopped by Curries while in town.

STICKERS ? Who’s Brainstorm was that?
On another note: I’d like to alert those voters in district 137 that your very own Chris Perone has been attending Legislative Committee Meetings so far this year. Now that you’re allowed to attend meetings from your bedroom his attendance has skyrocketed !! In summary, it’s taken a pandemic and new technology to make this happen, BUT congratulations are in order…

Any social scientist would never analyze something based on one variable. What is the mix of single parent households in Norwalk vs the rest of the state in the booze study?