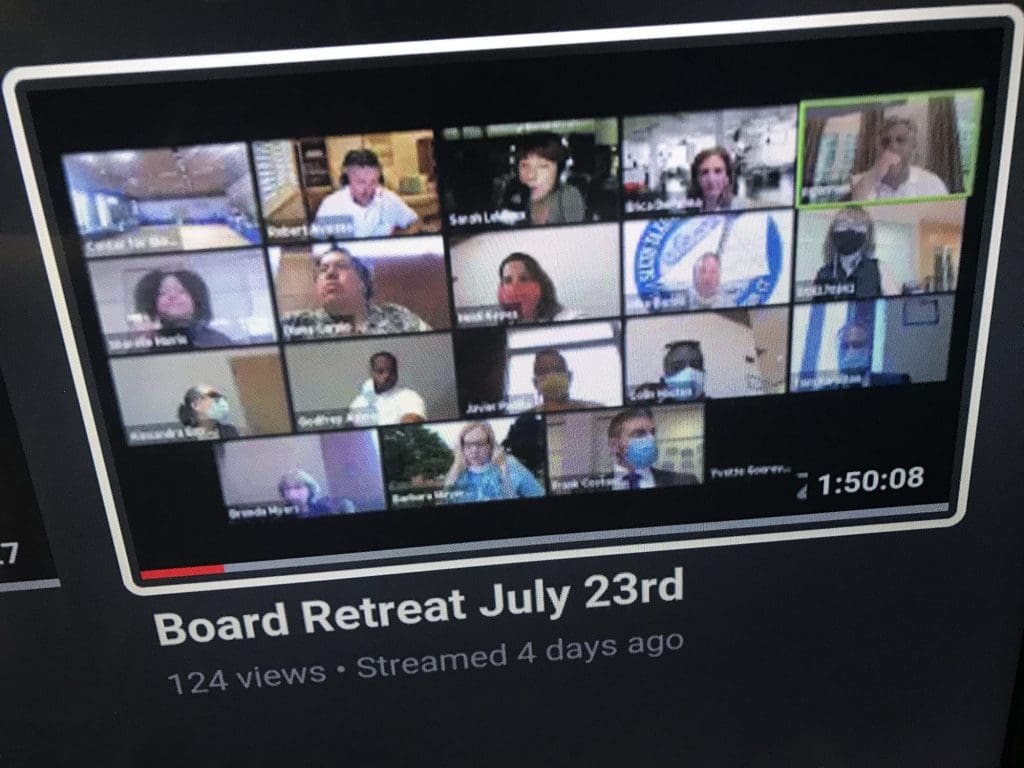 A YouTube video of Thursday’s Norwalk Board of Education retreat.

NORWALK, Conn. — More people than ever have seen the Norwalk Board of Education in action at its annual Board retreat. On the other hand, only the people who were there are fully aware of what was said.

The Board held its annual retreat despite COVID-19 concerns, using a hybrid model similar to what’s planned for the schools reopening: Any member who wanted to could attend in person, wearing a mask and keeping a social distance. Nonparticipants were not allowed in but could watch on YouTube.

There’s good news: while previous retreats attracted seven or eight audience members at best, the videos had up to 124 views as of Monday night. On the other hand, the audio on most of the sessions was challenging and at times indecipherable. And if you checked in when the meeting was scheduled to begin, you were frustrated, wondering when and if a video would be posted.

Norwalk Federation of Teachers President Mary Yordon is among the few who have faithfully attended previous retreat sessions. On Saturday morning, she replied to a NancyOnNorwalk email inquiry by writing:

“I admire all those who have found a way to get work done despite the restrictions of Covid-19.  I am grateful for Board members who are thoughtfully and serving on the Board of Education.

“The experience of watching meetings on a computer from home is very different from being an audience member.  The medium is the message is a pretty old saying. The zoom meeting watched on youtube sends the message that those people there are working hard but we out here are isolated and on our own. This is not the intention of any elected official but it is the message of the medium itself. Right now I’m waiting for the Saturday meeting to start at 8:30 for an 8:00 meeting.  Even a short meeting in an electronic environment is problematic, as there is no opportunity for informal contact and chats with other audience members or the Board. You can’t check in with your neighbors, or even see who they are. It is important to be aware of the community that gathers around a topic, and the zoom meeting watched on Youtube separates us in the event that otherwise should unite us. Democracy thrives when people are engaged and informed, and there are too many barriers to participating in government activities when it all goes online on youtube.

“During the Board retreat, the sound problems were substantial at times, and documents were impossible to read. I did find the documents electronically, and toggled back and forth on my screen. It is not clear that others have the ability and determination to find the links, find the documents, understand voices through the white noise, and have the physical stamina to stare at a screen for hours without speaking, moving,  or interacting.  Watching a day-long meeting on a computer strains the body.  The format of a day-long meeting is not well suited to the electronic meeting environment.

“I understand why they have to have these zoom meetings now. But this should be a temporary solution that cannot continue. Governor Lamont maintains that it is safe to bring back schools in a month. We will gather roughly 12000 students back to the buildings along with thousands of employees. At the time we bring back schools, then we must also bring back in-person public meetings. Meetings can be limited in ways that we are limiting in our school buildings, with maximum capacity established in advance, distancing, and masks.

“I have sympathy for anyone who spends the majority of a day at a screen, Board members included. It is good that the Board did not abandon the retreat. Important work is being done. They are sacrificing to be there.

“However, we are all much better served by meetings in person, in community with others, with handouts, no glitches and freezes, and the ability to see and hear properly.

“Today’s meeting is a good example of the challenges. We can’t hear well. We can’t see the data on the screen. We can’t access copies of the complex data to understand well what they are discussing. We do have copies of some other documents. We don’t know who is speaking at any given time for the most part. There is white noise, papers rustling, sounds of soda cans being opened and plastic packaging crinkling in microphones that are drowning out the people speaking. They have worked carefully to broadcast in real time,  to provide many documents, to be visible and audible, they are reminding people to speak in microphones. I believe that they are trying to be as inclusive of public access as possible, so this may be as good as a youtube meeting gets.”

“I understand the COVID-19 threat fully which makes it hard for me to comment on the retreat. Would I have liked more access? Of course!” she wrote. “I’ve always attended the retreats and received the handouts.”

The retreat was attended in person by seven of nine BoE members. Board Chairwoman Sarah LeMieux and Board member Eric DePalma participated remotely. Board members Sherelle Harris and Heidi Keyes, and Norwalk Superintendent of Schools Alexandra Estrella, could be heard but not seen in much of the equity discussion as they were off camera, meaning that audience members couldn’t be sure who was speaking. Barbara Meyer-Mitchell was particularly difficult to hear as she was furthest from the camera.

“The venue was changed to be larger and allow for more social distancing at the last minute, so the PA setup changed too – the board didn’t make the retreat plans or arrangements, or the decision not to allow members of the public in person,” she wrote. “I listened to the YouTube audio and I think it’s about how it would be under normal circumstances, everyone did their best. All board members were given to opportunity to participate virtually, and at least four of us did during various parts of the retreat. The other members chose to participate in person.” 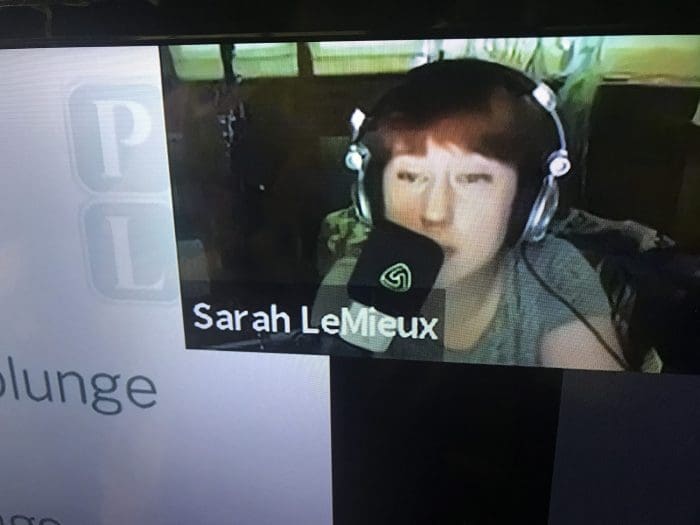 Lemieux prefaced one of her remarks to the Board on Saturday by apologizing if she was repeating something that had already been said, as it was “tricky” to hear. A musician, she was using a headset to attend via Zoom.

There were multiple references during the retreat to experiencing what teachers and students struggle with during distance learning.

And email sent to all Board members resulted in a reply from Norwalk Public Schools Communications Director Brenda Wilcox Williams, a statement from the full Board:

“Plans for the annual Board retreat were made with safety guidelines in mind for indoor events. Board and staff members who participated in-person followed the same protocols we have in place for in-school learning this fall, including masks and social distancing. As several of our presenters were unable to travel to Connecticut, they also attended virtually.

“Originally scheduled for the Bunkhouse, the meeting location was changed last week to a location with more space. The change did lead to some audio difficulties, particularly on the first day, with significant improvement once adjustments were made by the start of day two.

“We hope Connecticut’s COVID-19 rates will remain low and that a return to regular in-person meetings will come soon.  Until then, the Board and District remain committed to doing our very best for our students, staff and families during these unprecedented times.”

A new oxymoron for the vernacular. Public Retreat.